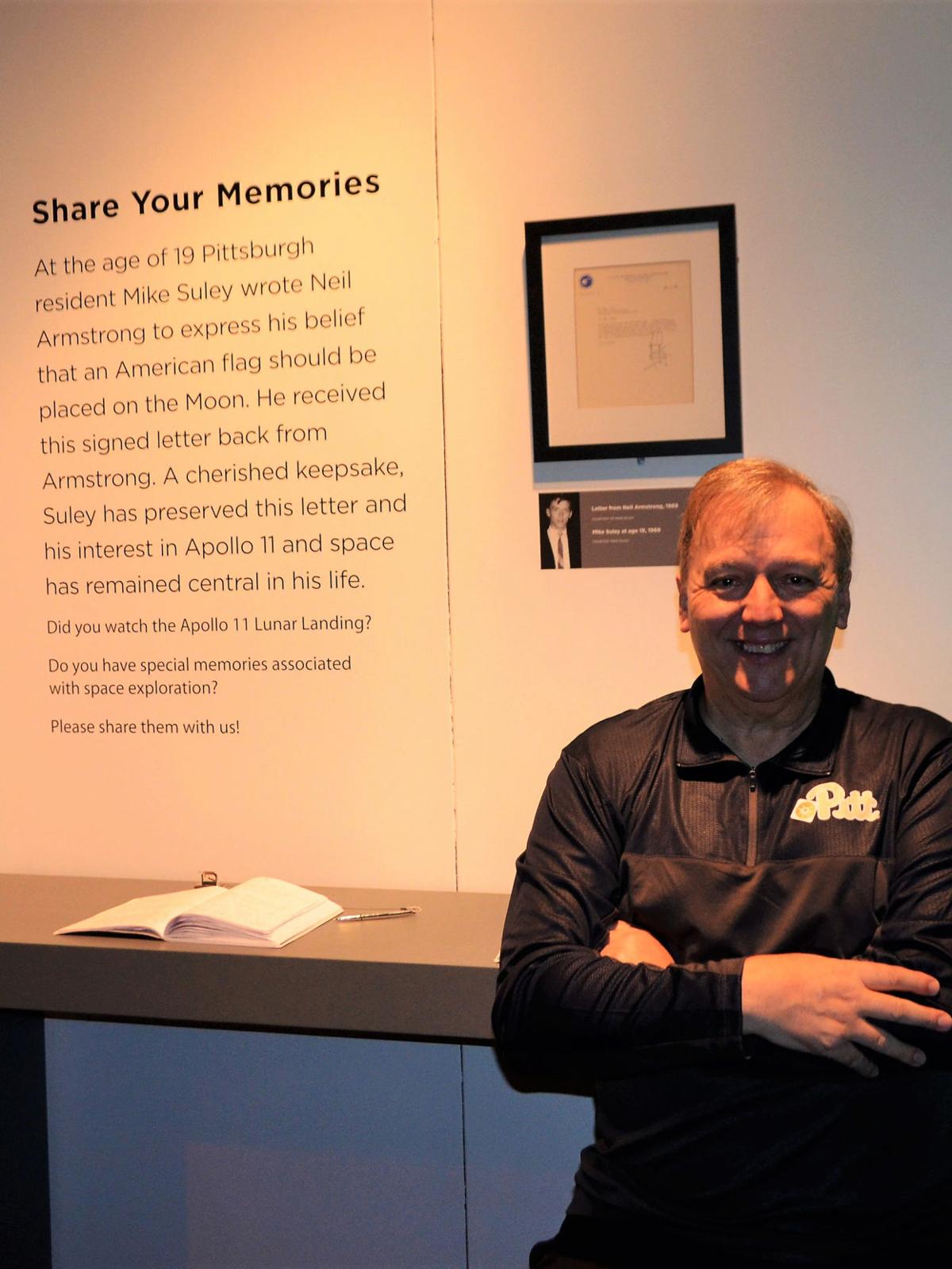 Mike Suley’s 1969 letter from Neil Armstrong is on display for “Destination Moon: The Apollo 11 Mission.” 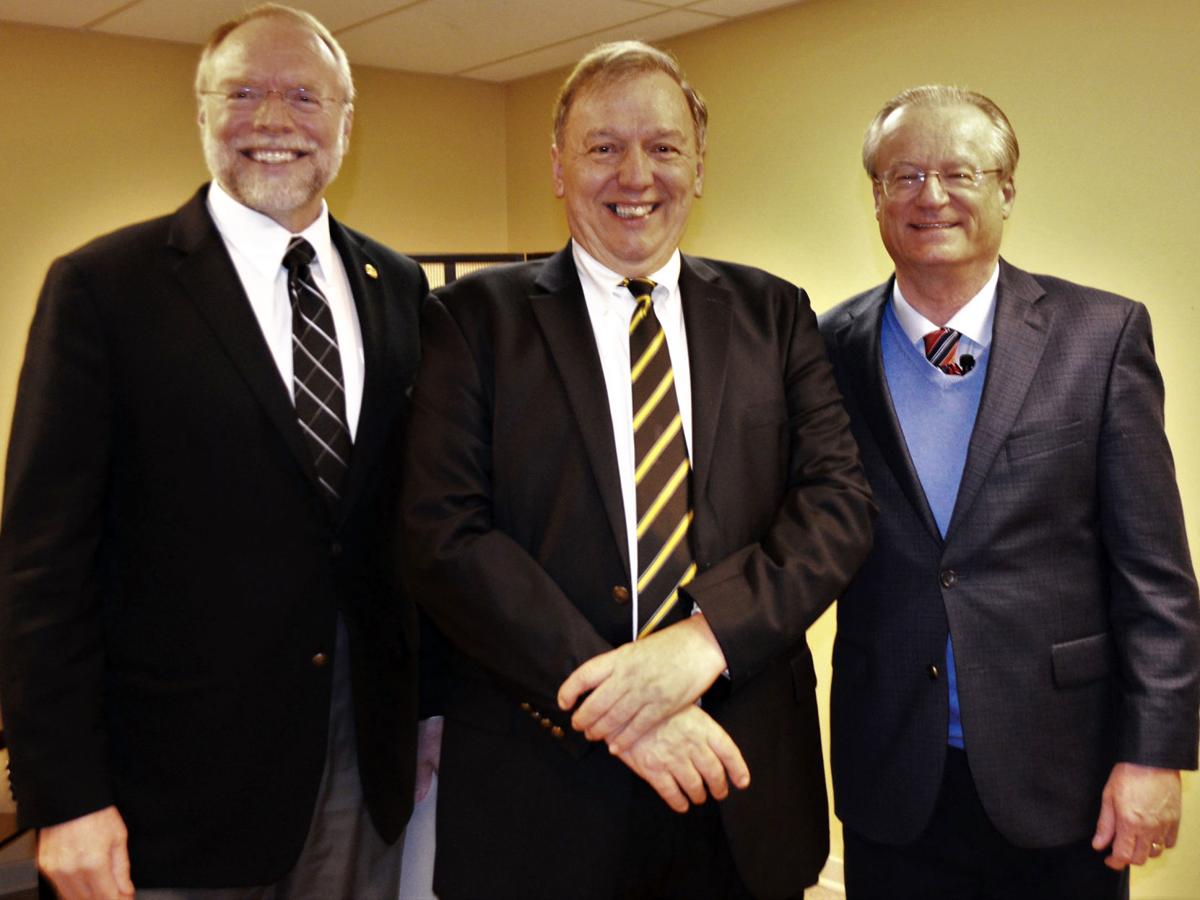 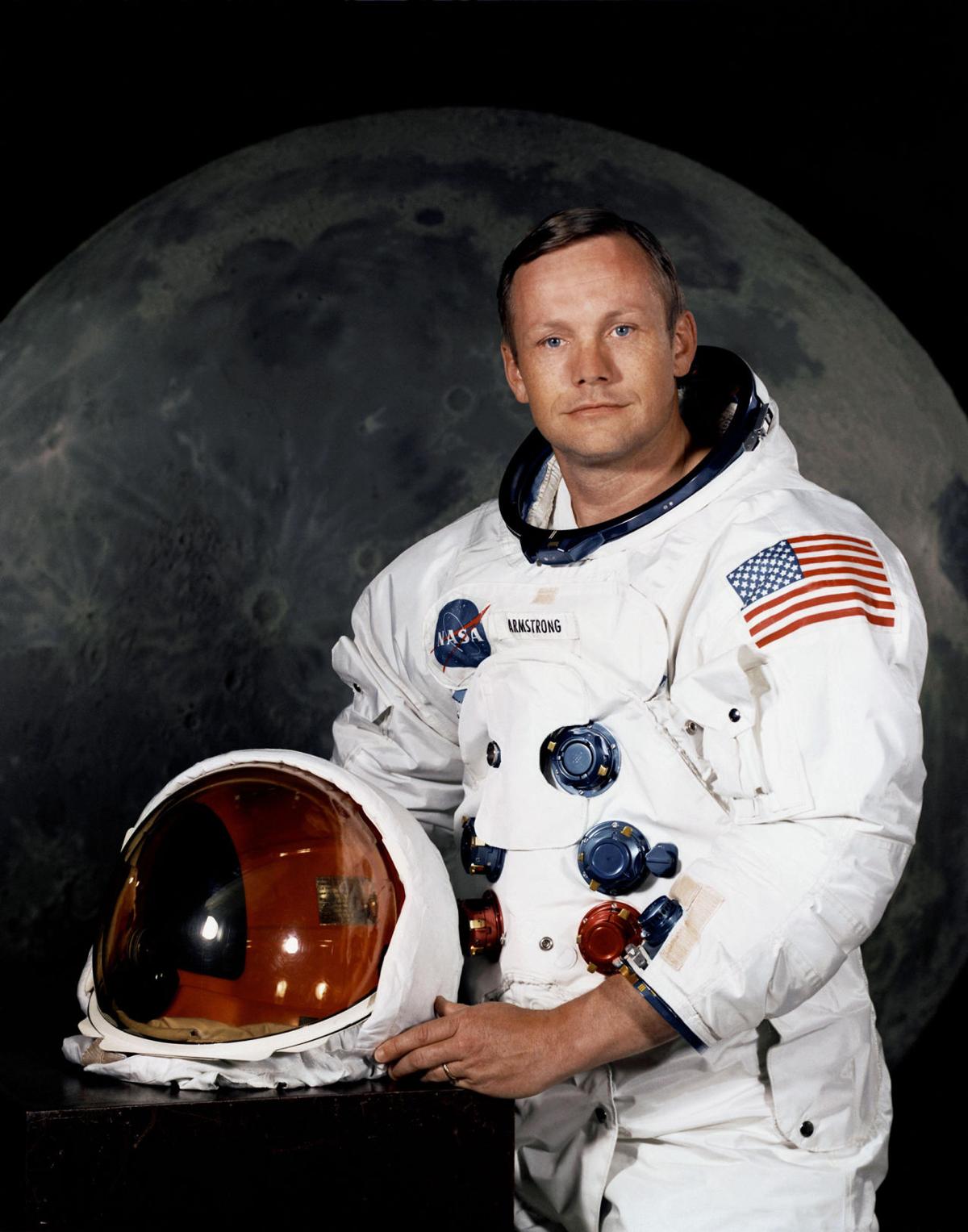 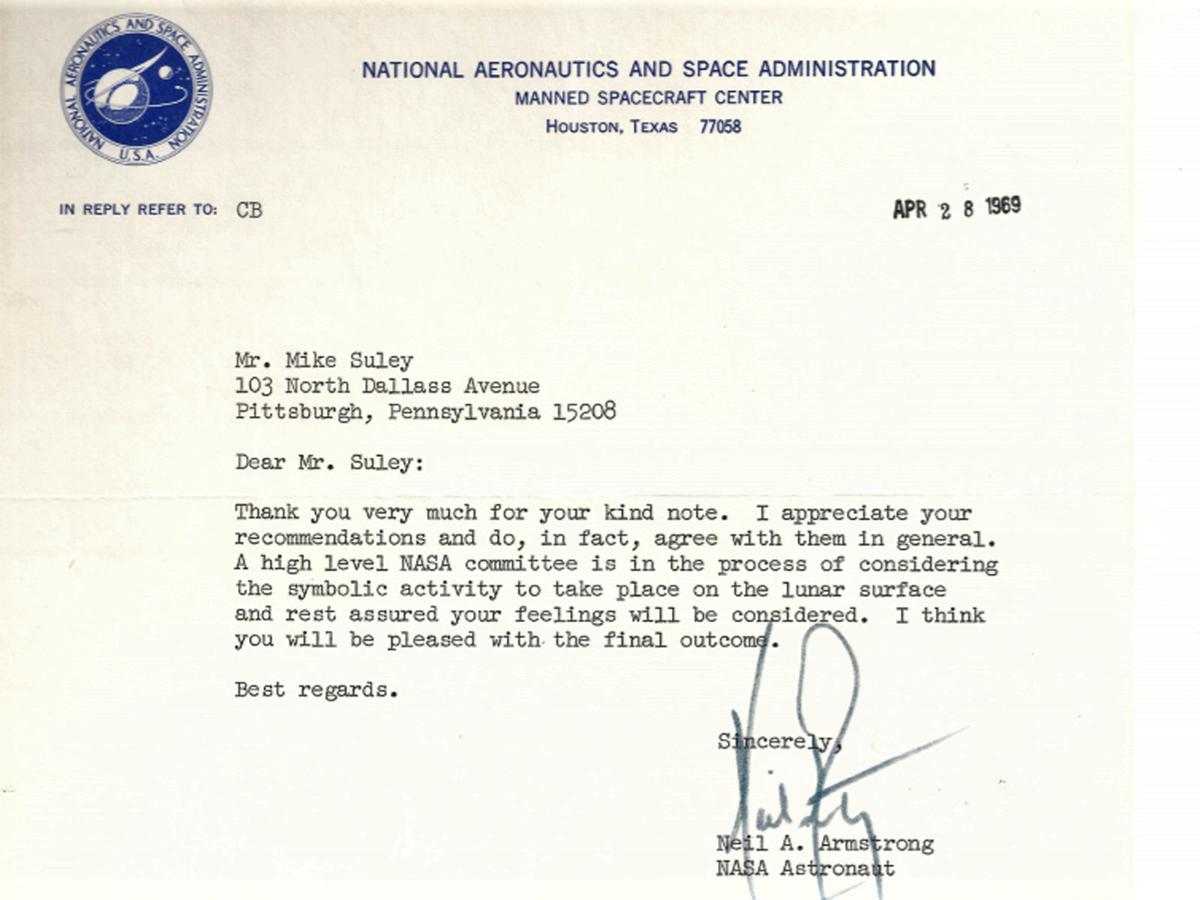 Thirteen years before it was adapted as a $100 million-grossing motion picture, James R. Hansen published his book “First Man: The Life of Neil A. Armstrong.”

Mike Suley, at that time a Mt. Lebanon resident, made a request.

In the last few decades of his life, Armstrong (1930-2012) become so disillusioned with people trying to make a buck or two off his “small step, giant leap” fame – or $3,000, in the case of his barber trying to sell his hair – that he gave no more autographs.

Fortunately for Suley, he already had a copy of Armstrong’s signature, on a letter dated April 28, 1969, complete with a National Aeronautics and Space Administration letterhead.

Then 19, Suley had written to President Richard Nixon, members of Congress and other movers and shakers expressing his opinion that a U.S. flag, as opposed to one bearing the United Nations logo, should be planted on surface of the moon when American astronauts reached it.

I got letters back from everybody, but they were all the boilerplate stuff,” Suley, who now lives in Scott Township, said. “And I get a NASA envelope, open it up, and it’s from Neil Armstrong.”

Remember, his reply came almost three months before the lunar module Eagle landed and he descended the ladder into the Sea of Tranquility.

“Why did I write Neil Armstrong? Because he was the commander of the Apollo 11 mission,” Suley explained. “I didn’t know he was going to be the guy to walk on the moon first.”

“The night of the moon landing, I took the letter out and put it on top of my little Philco, my little black-and-white TV,” he said. “It was like, I felt a connection to Neil Armstrong.”

The letter then went back between the pages of a Bible for safekeeping, where it stayed until Suley had it framed a few decades later. He had the letter appraised in the 1990s, with the appraiser answering the question: Is that Armstrong’s signature?

“He said, ‘Yeah. He was answering a specific request by you, and he signed it,’” Suley recalled. “He said, ‘Take it out of the frame, scan it and put it in a safe somewhere,’ which I did after that. And he said, ‘That will be a valuable piece of history.’”

The appraiser also told Suley about the book Hansen was in the process of writing, and the two started communicating, which eventually led to the 2005 book-signing request.

As for the letter, it’s now on loan to the Senator John Heinz History Center for its exhibit “Destination Moon: The Apollo 11 Mission,” which continues through Feb. 18. Among the items on display is command module Columbia, the only part of the Apollo 11 spacecraft to return intact to earth.

Visitors to the exhibit may wonder why a 19-year-old was so interested in what kind of flag would be on the moon.

“I was really into the NASA program. I was a space geek,” Suley admitted. “I still am, I guess.”

In early 1969, he read in various publications that NASA was leaning toward planting a U.N. flag, apparently in response to a statement Nixon made during his inaugural address: “As we explore the reaches of space, let us go to the new worlds together, not as new worlds to be conquered, but as a new adventure to be shared.”

Suley’s response: “I said, wait a minute. We invested all the money. We risked our lives. People died.”

On Jan. 27, 1967, Gus Grissom, Ed White and Roger Chaffee were killed in a fire in the Apollo command Module during a pre-flight test at Cape Canaveral.

“I appreciated your recommendations and do, in fact, agree with them in general,” Armstrong wrote in response to Suley. “A high level NASA committee is in the process of considering the symbolic activity to take place on the lunar surface and rest assured your feelings will be considered. I think you will be pleased with the final outcome.”

“So I felt like I had a heads-up,” Suley recalled. “I remember telling my friends and relatives, ‘We’re going to have a U.S. flag.’”

And to this day, it stands in the Sea of Tranquility.