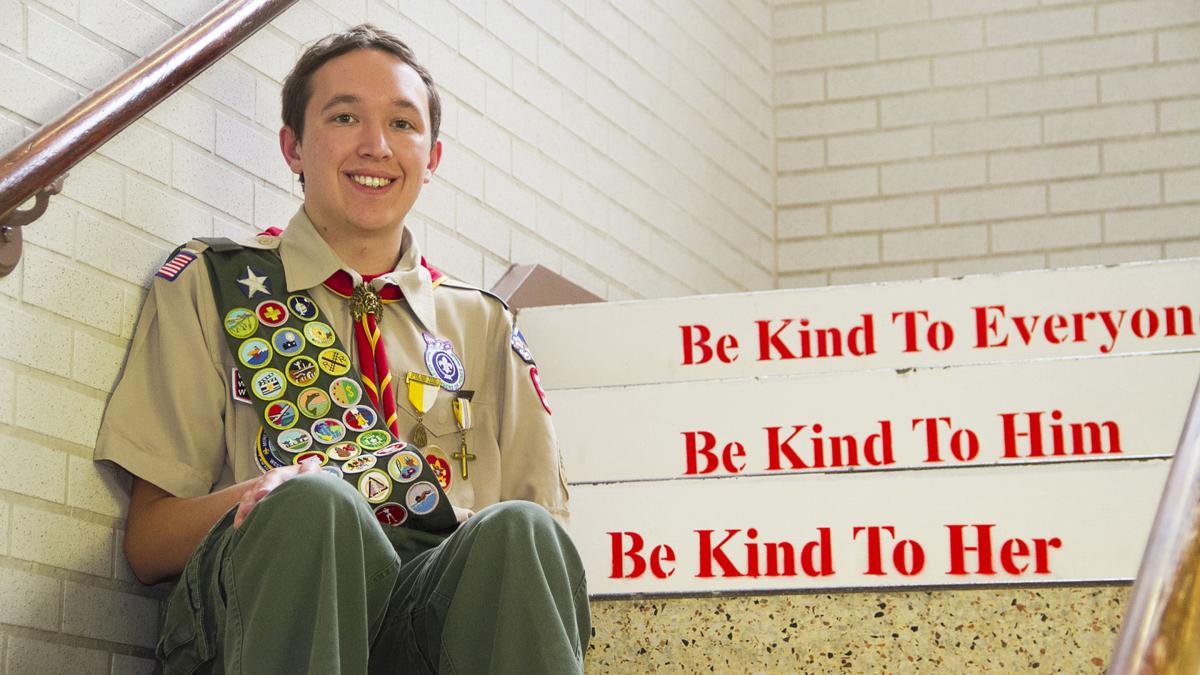 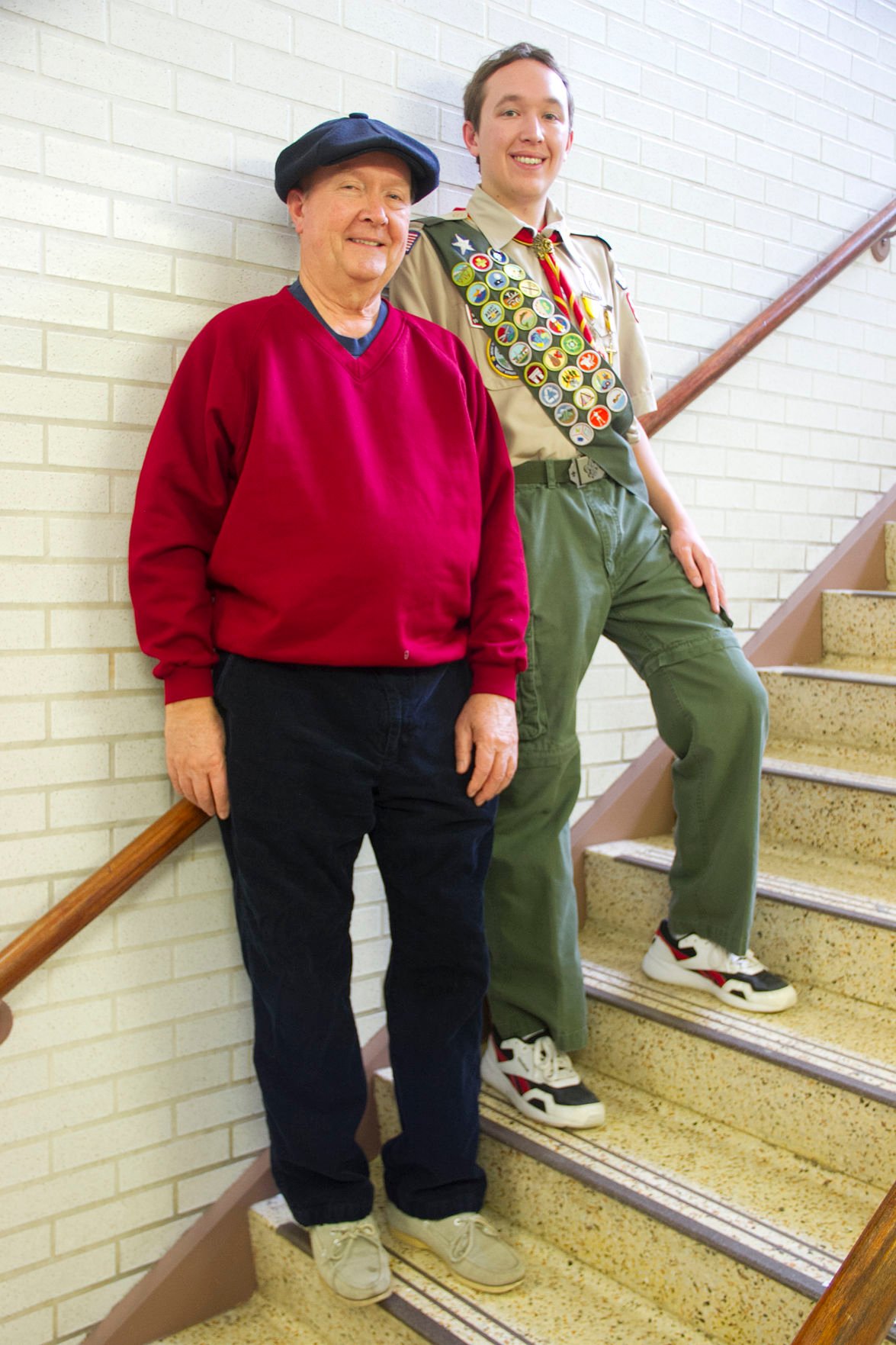 Michael Batko with his father, Greg 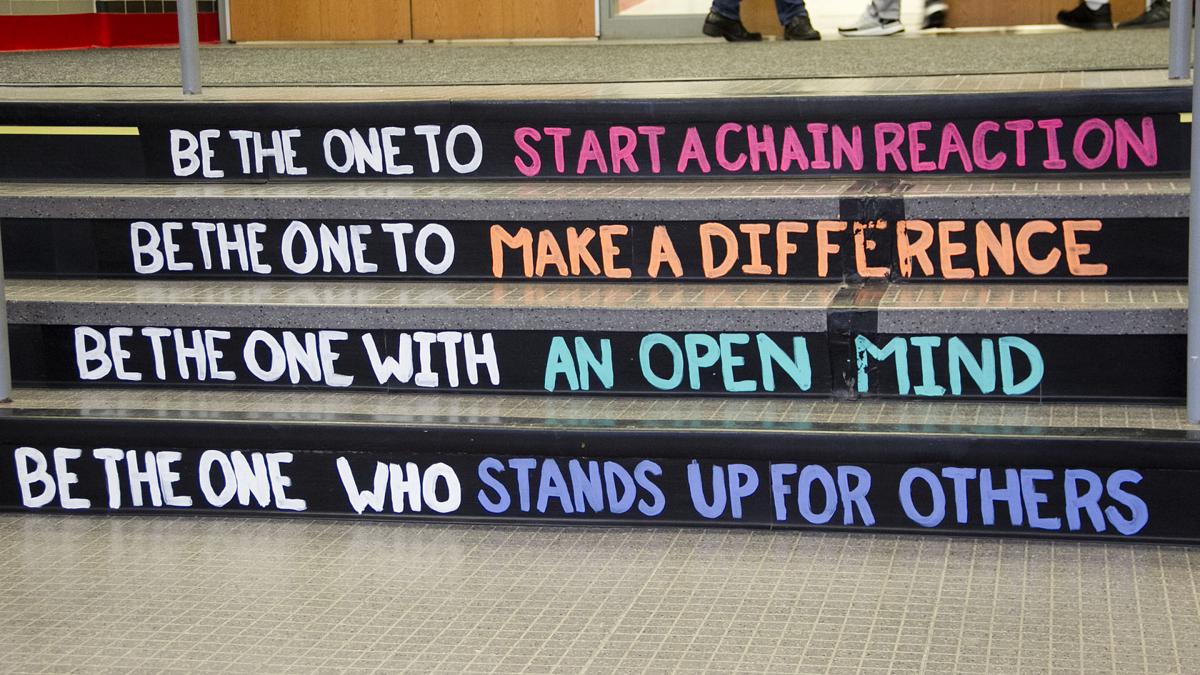 The steps inside Peters Township High School’s main entrance were painted at the beginning of the school year to reflect a “Be the One” theme inspired by Rachel’s Challenge.

During winter break, most students would prefer to stay far away from their schools, let alone visit them multiple times.

So it’s easy to imagine Michael Batko isn’t your typical student, nor are his friends and fellow members of Boy Scout Troop 1313 who helped him complete a new feature at Peters Township High School.

As a project on the way toward earning his Eagle rank, Michael painted messages on the school’s stairwells that his classmates – adults in the building, too – may want to consider employing on an everyday basis.

The messages adhere the Sixth Boy Scout Law, which states in part, “A Scout is kind.” Plus they are at the core of Rachel’s Challenge, the worldwide kindness program carried on by the family of Rachel Joy Scott, who lost her life in the 1999 tragedy at Columbine High School in Colorado.

“Michael’s idea was very well-received by the district, because it fell in line with the work we’ve been doing with Rachel’s Challenge to try to promote kindness, as well as to prompt reminders for simple ways that we can be kind to one another,” Peters Township High School assistant principal Christian Lesnett said. “His message fell perfectly parallel to that initiative and was really a no-brainer for us to approve.”

To implement his concept, Michael thought about what would be most effective in gaining attention.

“Where do people look the most during their school day, in between classes?” he said.

The answer then became clear.

“You can ignore a poster on the wall,” he said, “but you have to look at the stairs. Perfect real estate right there.”

The project involved four days of masking, painting and sealing a total of 36 steps, the top three steps of 12 flights. Michael oversaw a crew of 10 assistants, with everyone putting in about 60 hours of work.

“It’s not just doing a project,” his father, Greg, said about the Eagle Scout aspect. “They want you to show leadership.”

To get the ball rolling, Michael spoke with Greg Gold, owner of Miller’s Ace Hardware, about how to tackle the project.

“We talked about what kind of paint I wanted to use and what kind would be best,” Michael said. “He gave me a donation, and I was so thankful.”

The timing of the project’s completion was effective, of course, from the standpoint of working in a temporarily empty building. But Michael had another reason for taking on the project.

“I’d get it done over break, and then when everyone would come back in the new year, they’d really notice,” he said.

District communications coordinator Shelly Belcher said his project corresponds with a leadership type of initiative at the high school.

“The theme for this building this year is ‘Be the One.’ What they’re trying to do is empower the students to be that one person who does something different, who is kind, who steps out and recognizes the kids who might need a friend,” she said.

“I think you’ll see that idea carry over to the new building,” she continued, referencing the under-construction high school scheduled to open in 2021, “because Rachel’s Challenge is here to stay for us. I love how much it’s being adopted by the students, the community and everybody.”

This time next year, Michael plans to be studying aeronautical science at Embry-Riddle Aeronautical University in Daytona Beach, Fla. At age 17, he already has logged more than 30 hours of flying an airplane and recently flew solo.

His high school teachers and administrators will miss him.

“He is an exemplary student and exemplifies the quotes that he put on the stairwell treads,” Lensett said. “He has lived that, himself, as he is kind to everyone around him. He’s one of the most friendly kids walking in the building every morning. He always greets you with a firm handshake, a ‘good morning’ and a ‘how are you.’ He’s that kind of guy.”