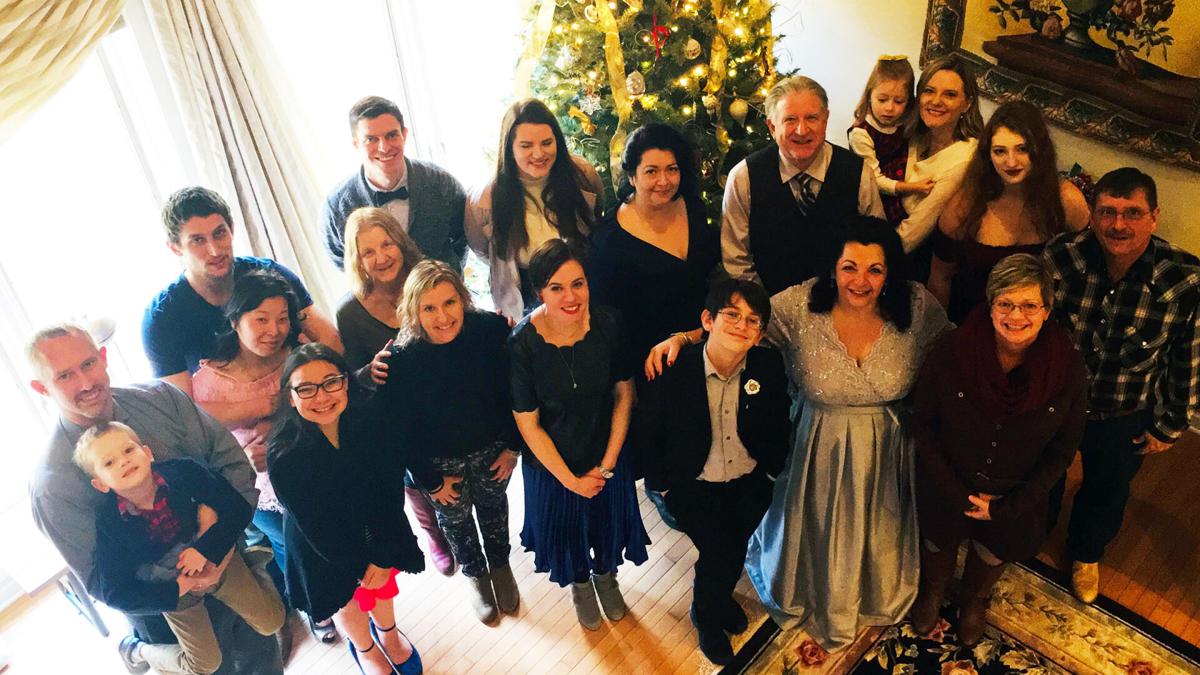 The Ritters tie the knot at their Peters Township home. 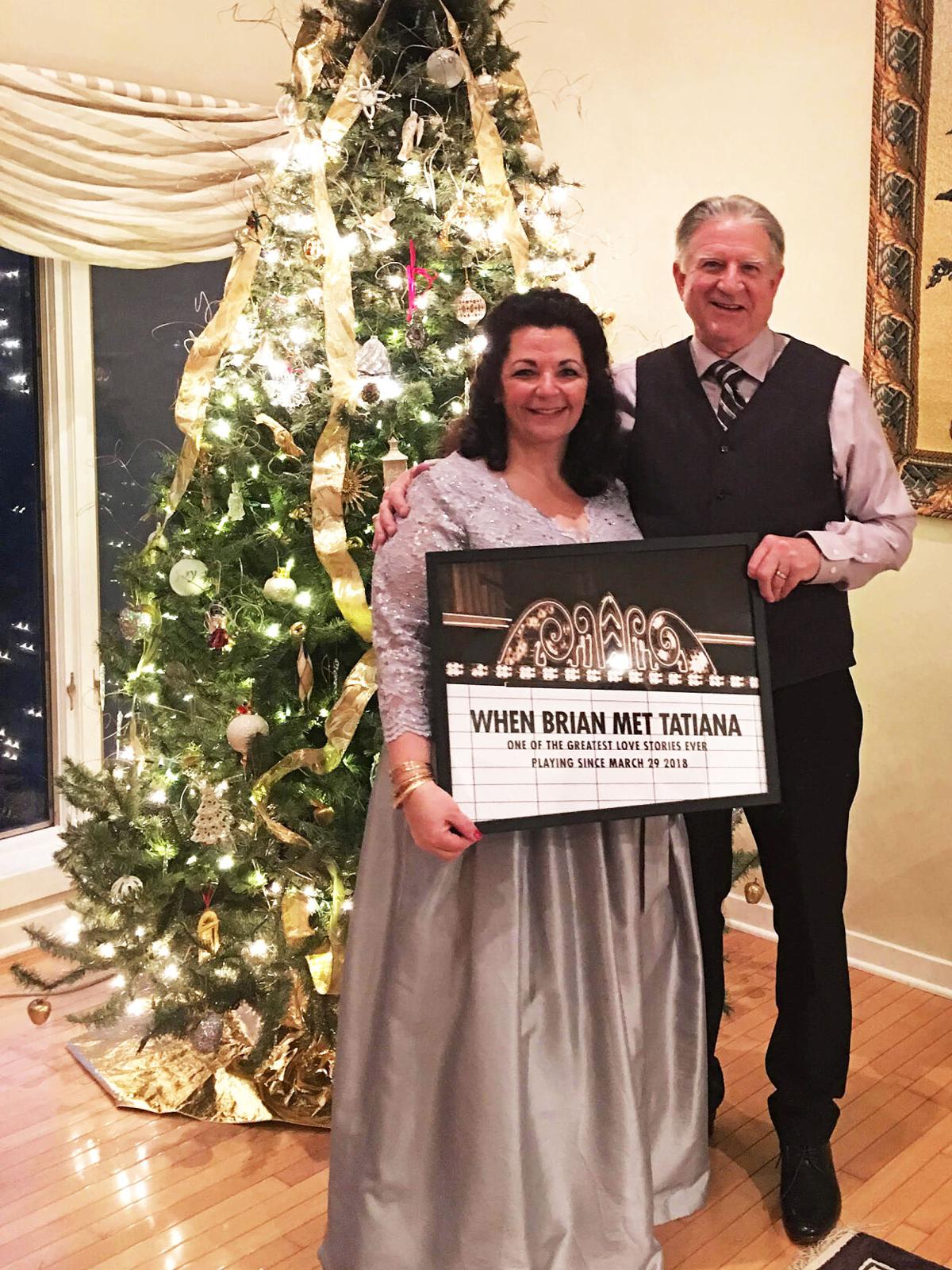 A wedding gift to Tatiana and Brian Ritter commemorates “one of the greatest love stories ever.” 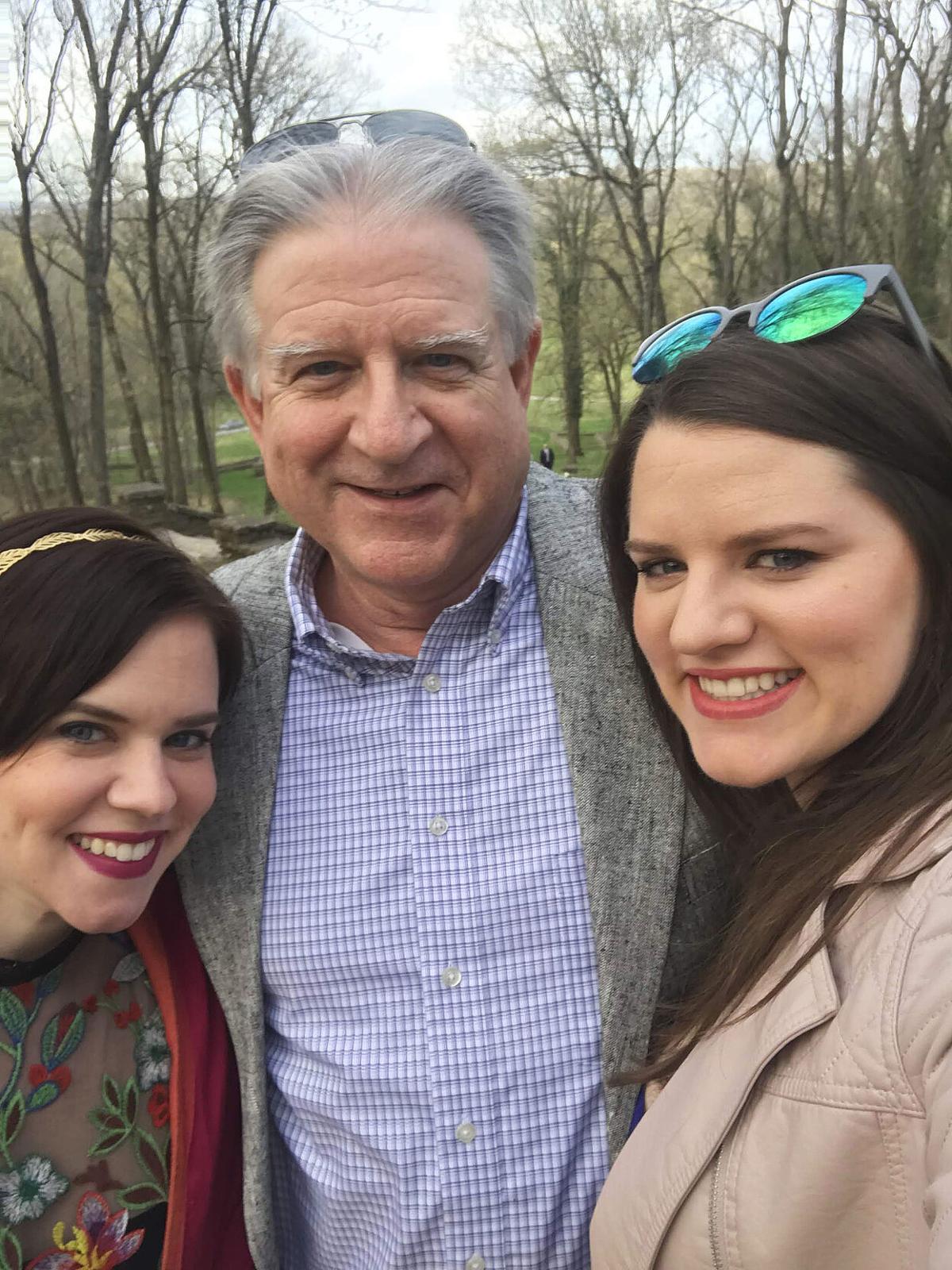 Brian Ritter with daughters Paige Carroll, left, and Rebecca Ritter during the trip to the start-of-something-big wedding in Nashville, Tenn. 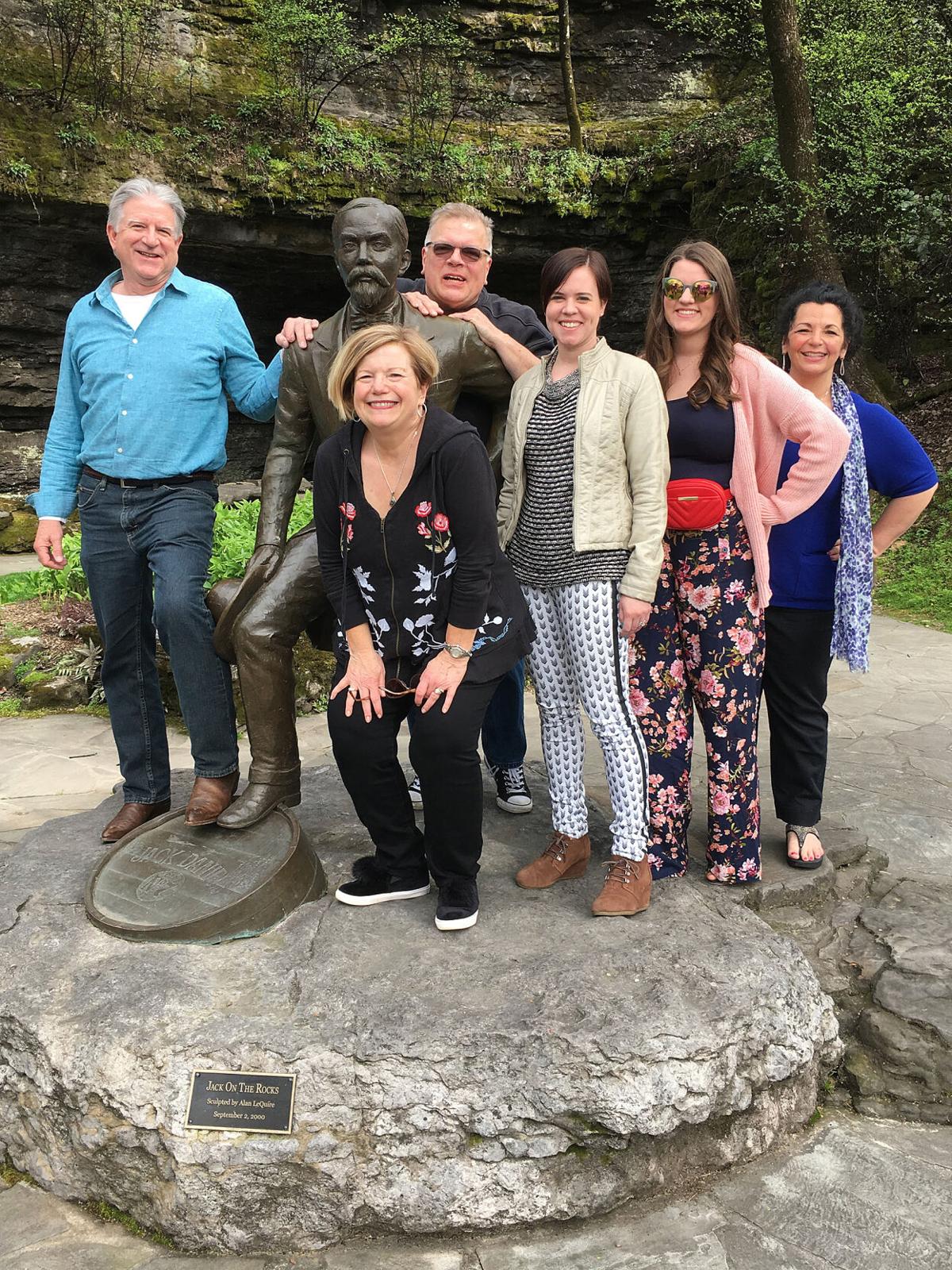 Brian and Tatiana flank fellow visitors to the Jack Daniel's Distillery, for which Tatiana served as designated driver. 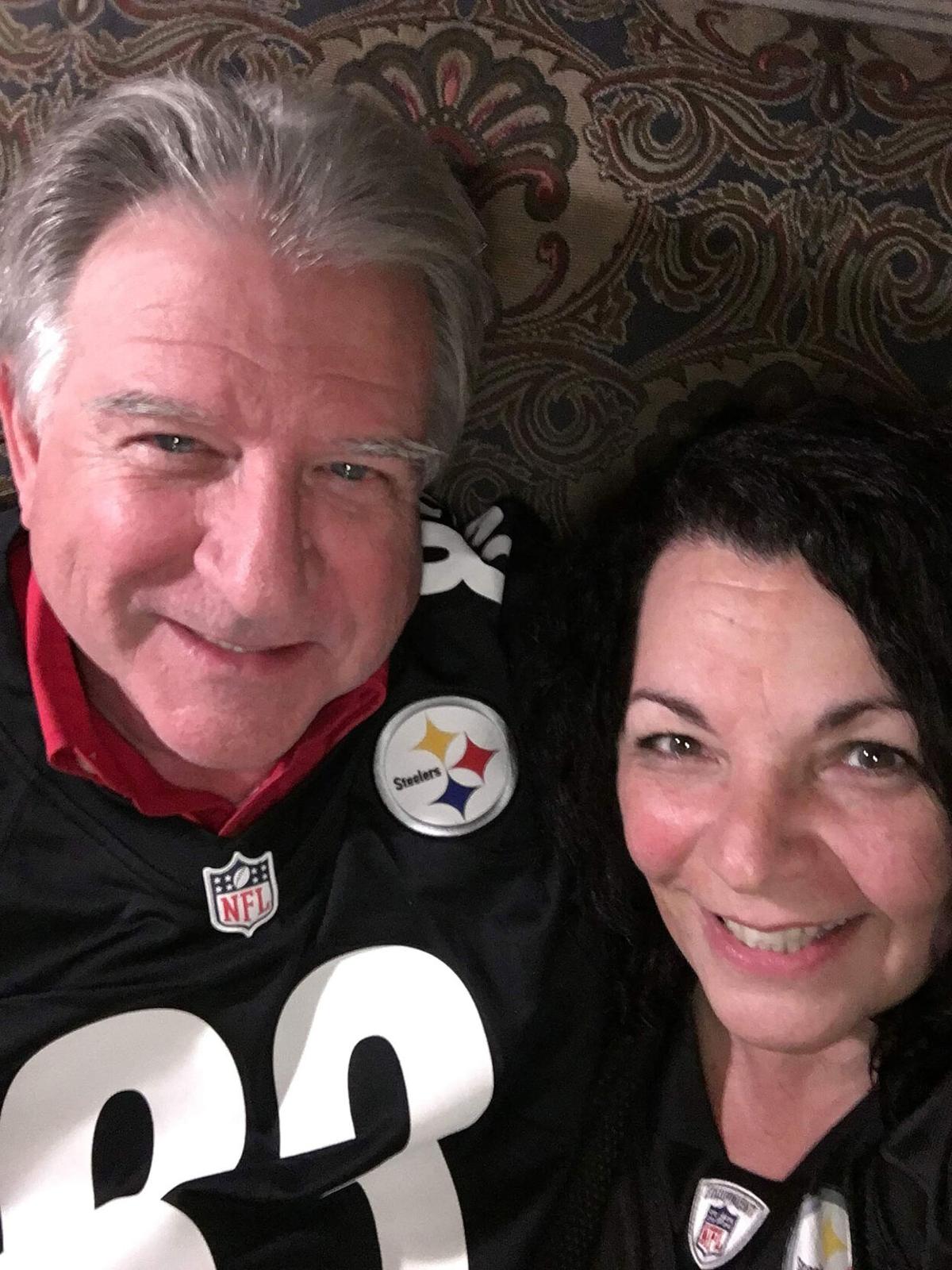 Tatiana knows the football team to root for now. 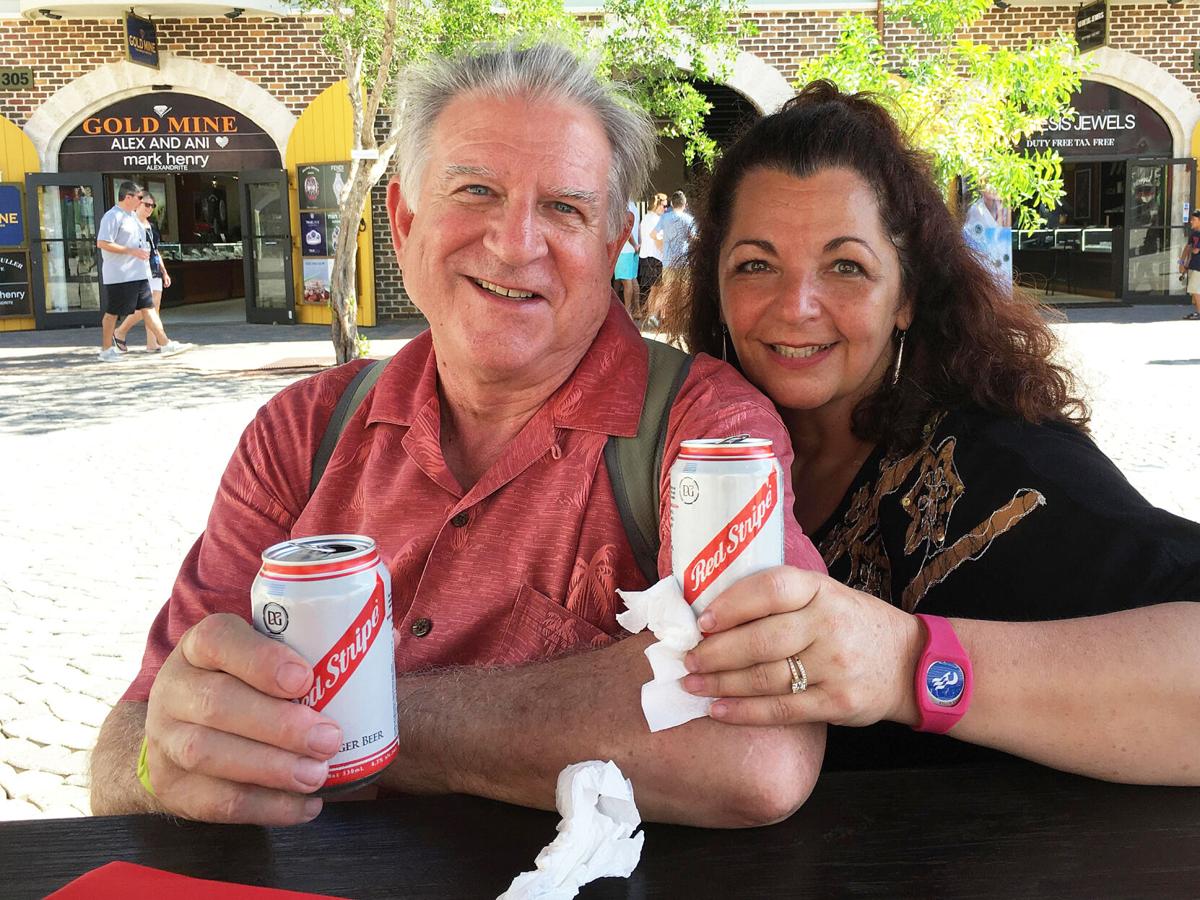 Brian and Tatiana enjoy a few cold ones on a sunny day.

The Ritters tie the knot at their Peters Township home.

A wedding gift to Tatiana and Brian Ritter commemorates “one of the greatest love stories ever.”

Brian Ritter with daughters Paige Carroll, left, and Rebecca Ritter during the trip to the start-of-something-big wedding in Nashville, Tenn.

Brian and Tatiana flank fellow visitors to the Jack Daniel's Distillery, for which Tatiana served as designated driver.

Tatiana knows the football team to root for now.

Brian and Tatiana enjoy a few cold ones on a sunny day.

When describing his reaction to his first substantial encounter with his future wife, Peters Township resident Brian Ritter often references “The Godfather.”

He specifically recounts the scene in which Michael Corleone first sees Apollonia and is struck by what Sicilians call – according to the movie, at least – “The Thunderbolt.”

That’s what happened to Brian with Tatiana.

“It was like a mental double take. I was sitting there looking at her, and all of a sudden I just shook my head,” he recalled. “I looked at her again and I thought, who the hell are you and what did you just do to me? I was just slammed.”

Of course, Tatiana quickly took note of her admirer.

“I do remember sitting down and noticing Brian’s eyes, and I was like, why am I noticing this man? I’m not interested in people,” she said. “Why am I noticing him, and why is it that every time I glance over there, he’s staring at me?”

Tatiana had lost her husband, Albert Savocchi of suburban Chicago, to cancer, the year before. Brian’s wife, Diane, also had succumbed to cancer.

“Neither of us was interested whatsoever in starting another relationship,” Brian said.

Yet the mutual interest that took root during what essentially was a chance meeting in Nashville, Tenn., culminated in Tatiana and Brian being wed Dec. 27, 2018.

Their story actually has a prologue, a brief encounter by way of mutual friends, Bobby and Barbara Holder, who brought a visiting-from-out-of-town Tatiana to a party they organized in 2000 to celebrate Diane and Brian’s 25th anniversary.

“I met her, but I don’t really remember meeting her other than the fact that ‘Hey, Brian, this is Tatiana. This is the friend I’ve talked about,’” Brian said. “And that was the extent of it. But it was kind of cool, just knowing that we had crossed paths once before in the past.”

Fast-forward more than a decade and a half, and Tatiana was in the hospital with a case of pancreatitis. She also was scheduled to fly to Tennessee to help officiate the wedding of the Holders’ daughter, Corrine.

So Tatiana told the people who highly recommended that she stay, “No, I have to go.”

Meanwhile, Brian and daughters Paige and Rebecca also were traveling to Nashville for the nuptials, arriving at the Holder home before Tatiana.

“She comes into the house, and everybody’s saying, ‘Oh, Tatiana’s here! Tat’s here!’” Brian recalled. “She walked in and I’m looking at her, and I said, ‘OK, that’s who that is.’ I had heard her name mentioned as a good friend of Bobby and Barbara.”

Then came Brian’s “Thunderbolt.” And he acted accordingly.

“I kept going back to her and trying to find ways to start conversations with her,” he said. “I followed her around all weekend, like a little puppy dog kind of thing.”

He particularly enjoyed Tatiana agreeing to serve as designated driver for a group of guests taking a day-before-the-wedding visit to the Jack Daniel’s Distillery.

“I wasn’t allowed to drink anything, because I was just out of the hospital. So he got all my samples. That’s why he stuck close to me,” she joked. “I couldn’t drink them, and every time they gave samples, he took mine.”

The two initially bonded, though, on a more serious note.

“Our conversations were largely about our shared experience of widowhood,” Tatiana said. “We both had been married to our soulmates. We both lost them. And that was primarily what we talked about, the grieving process and how difficult it was.”

At one point, she recommended Brian read a book that she had found to be helpful, “When Your Soulmate Dies: A Guide to Healing Through Heroic Mourning,” by Alan D. Wolfelt. In turn, he asked for her phone number so they could make arrangements to mail it to him.

Within a week after they returned to their respective homes, he called her for a second reason: to invite her to attend the musical production “Jesus” at the Sight & Sound Theater in Lancaster County, a show for which he purchased a pair of tickets well in advance.

She agreed to go, asking, when is it?

In the meantime, they began to talk on the phone with increasing frequency, until Tatiana suggested they use the 21st-century innovation of FaceTime. Then the FaceTime sessions became more frequent.

Then they finally decided to get together in person again, and Tatiana chose the town of Wauseon, Ohio, as being equidistant between Chicago and Peters Township.

“She got there after I did. I was waiting for her, and I got down to the parking lot to help her. And I was boasting what a great driver I was,” Brian recalled.

“We got one of those luggage carts and stacked all her stuff on the cart. I go to wheel it into the building, and of course, I hit the curb wrong and knock everything off,” he said. “And she says, ‘I thought you were a good driver!’ She busted me on that one.”

He managed to transport the luggage to her room, where they each had a seat.

“We were talking, or trying to, and everything got so awkward. I just felt funny. So I was trying to talk to her, but instead of looking at her, I’d be looking over there, and my eyes were just moving around,” he said.

“She finally looks at me and she says, ‘Brian, would you like to go over to your room and we can just FaceTime? And I cracked up laughing. I said, ‘No, I’m not going to do that. I don’t know what my problem is, but we’re going to figure this thing out. It probably took another 15 minutes before we got to where it should have been.”

The visit turned out to go well, and when she returned to Illinois, Tatiana confided with friends about what was happening in her life, telling them: “This is weird. I don’t want this. But I am very attracted to this person. There is a mutual experience that we share that draws us together.”

“I had started a widows’ group at my church,” Tatiana said, “and they were like, ‘Hey, you get a second chance at companionship and a good man. Most people don’t find one good man. God’s given you two.’”

So eventually she decided to move east, and she became Mrs. Ritter during a Christmas-season ceremony at their Peters Township home.

Two-plus years later, Brian and Tatiana are doing pretty much the same as everyone else by trying to stay safe while waiting out the COVID-19 pandemic. But they experience something that few others do.

“Our relationship really is a relationship of four people. It’s me and Al, and Brian and Diane,” Tatiana said. “We have their pictures hanging. We talk about them. They are part of our lives, and we feel like they are up in Heaven saying, ‘Yeah, we arranged this.’”

Brian and Diane, who was well-known in the community – she served for eight years on Peters Township School Board, two as president – were married for 40 years prior to her passing.

“There’s no way I’m not going to talk about her,” he said of Diane. “She can talk about Al and things they did together. That doesn’t bother me.”

Now that Tatiana is a Pittsburgher, Brian has made the necessary arrangements for her to switch at least one crucial sports allegiance away from Chicago.

“He kind of forced me into Steeler fandom, which was easy. But I told him I can’t leave the Cubs in my heart,” she said about the 2016 Major League Baseball champions. “My Albert had said, ‘I just want to see the Cubs win a World Series before I die.’ And they won while he was going through chemo. So it was so much joy to see them win.”