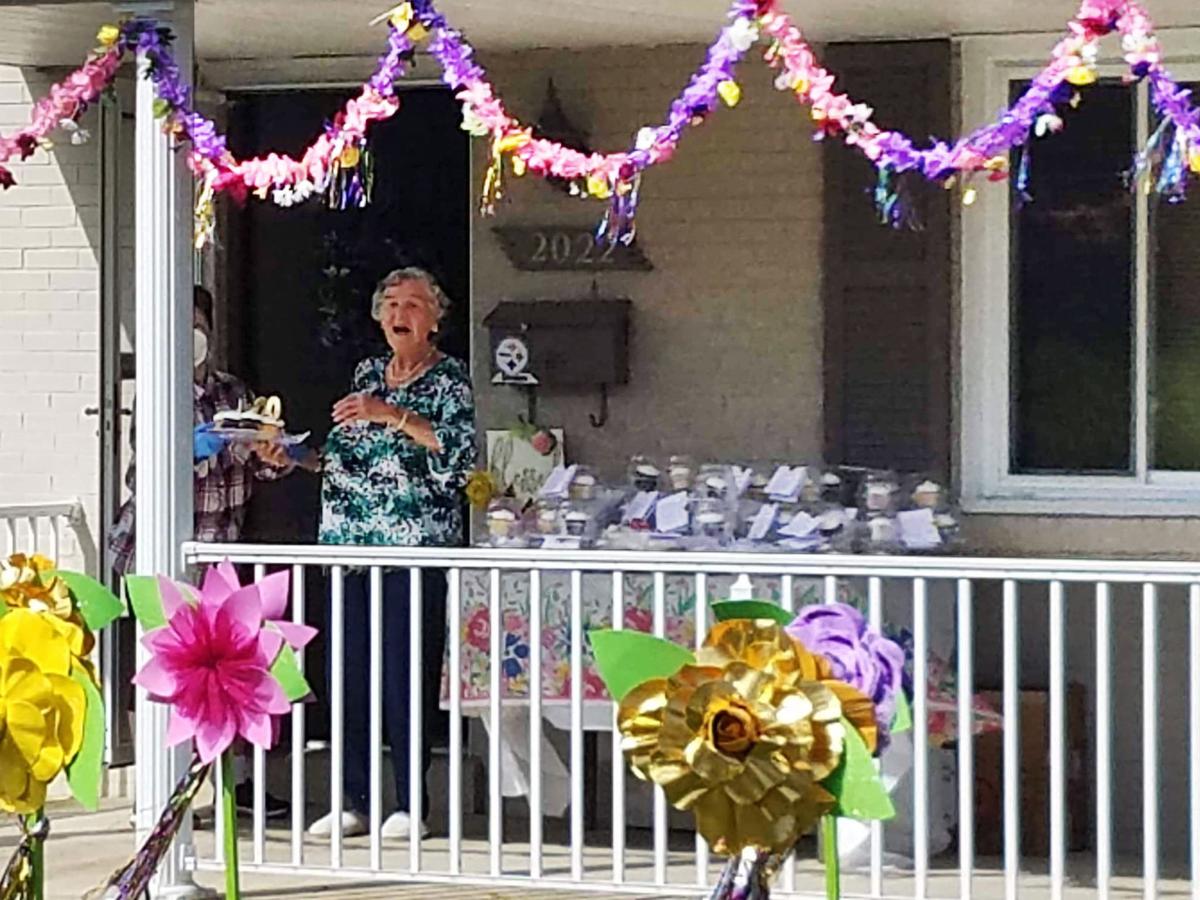 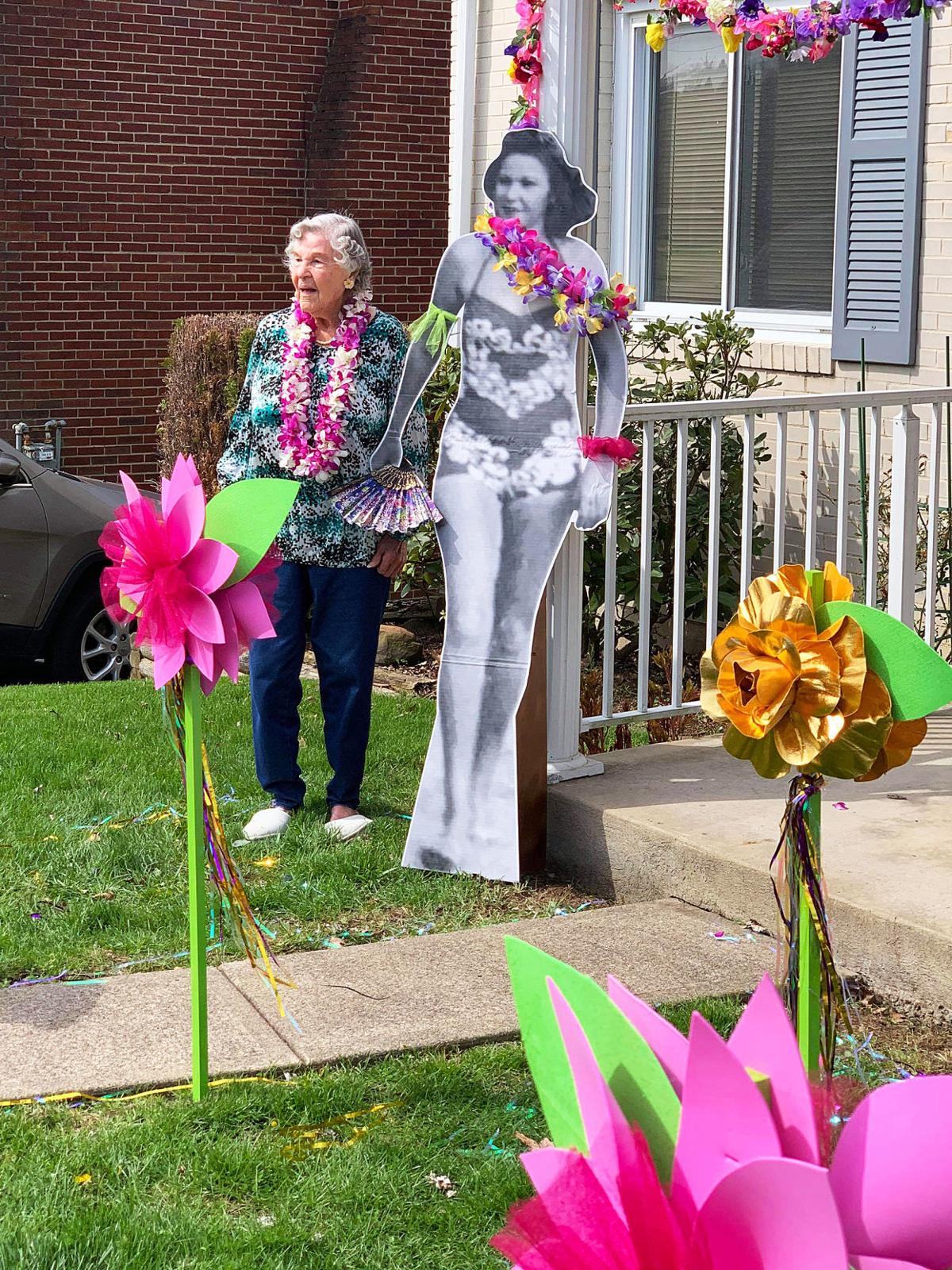 Virginia Flickinger’s family presented her with a cutout image of herself back in the day. 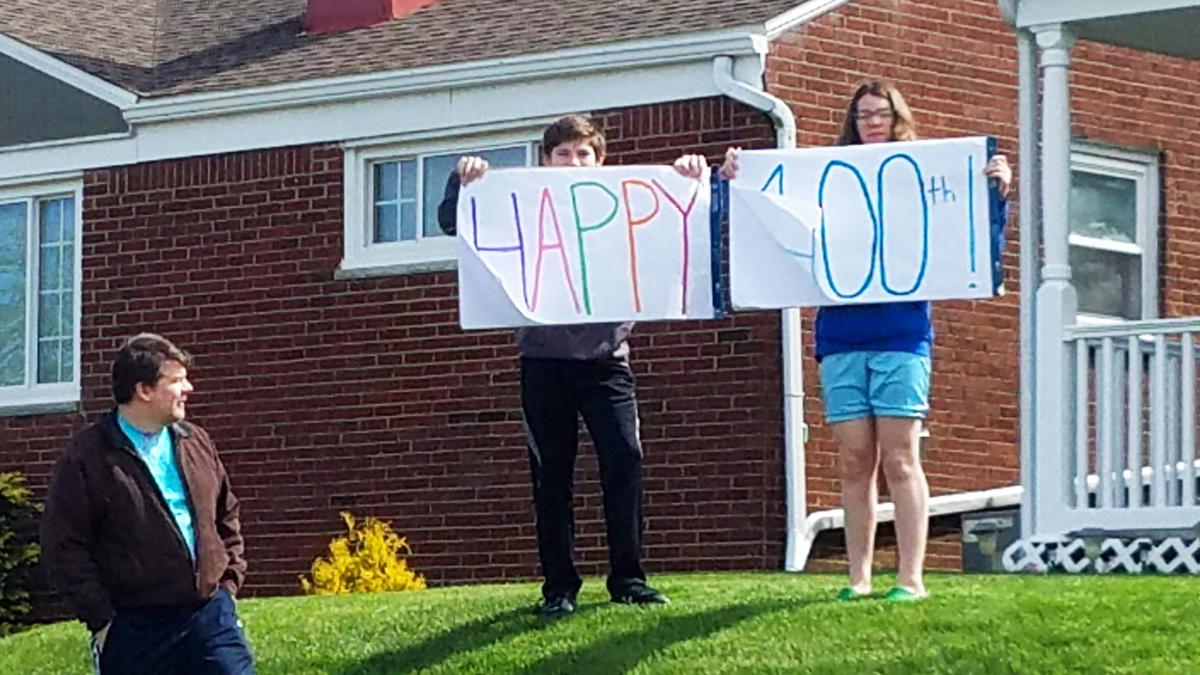 Young relatives of Virginia Flickinger highlight the purpose of the gathering. 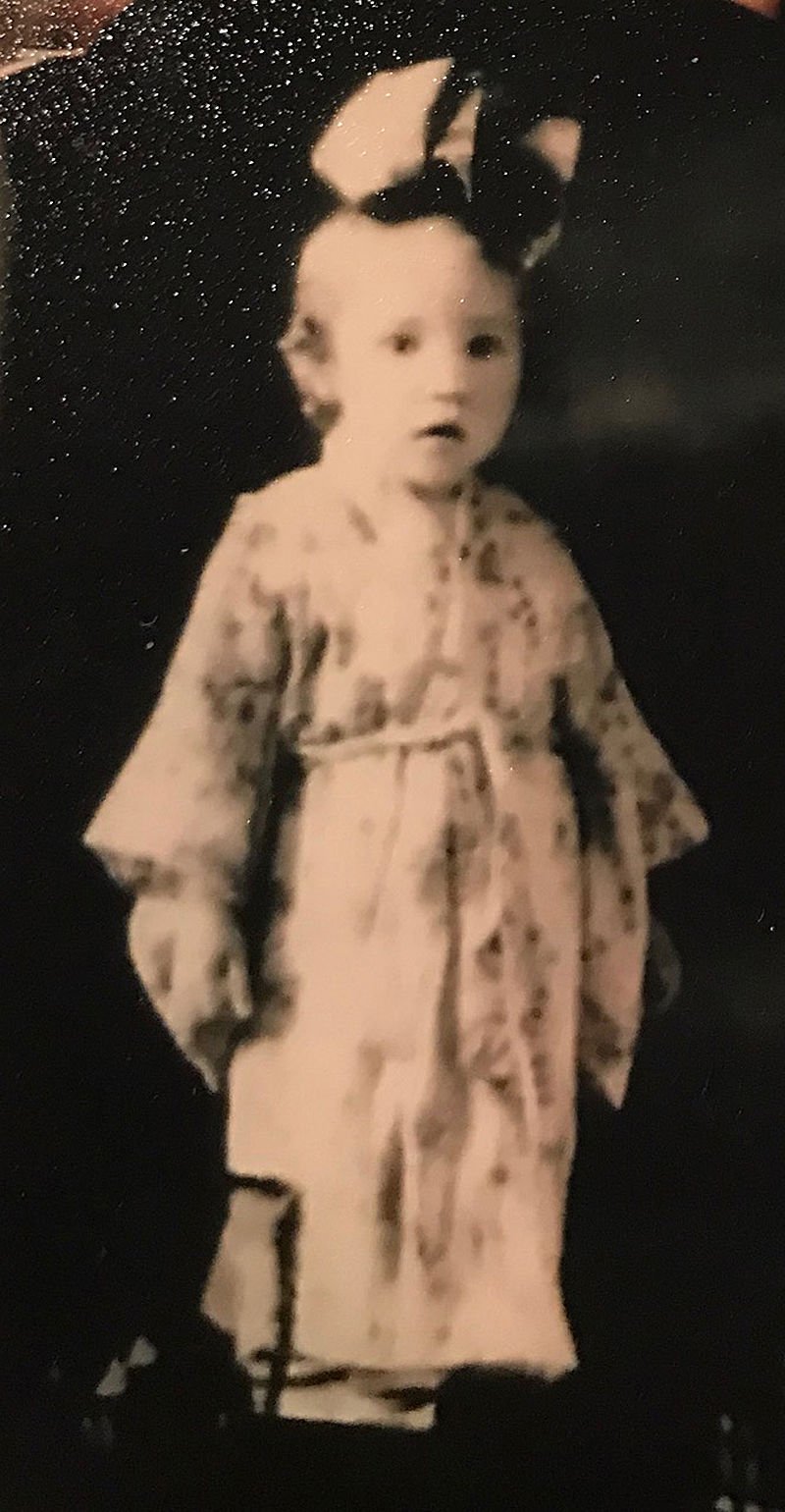 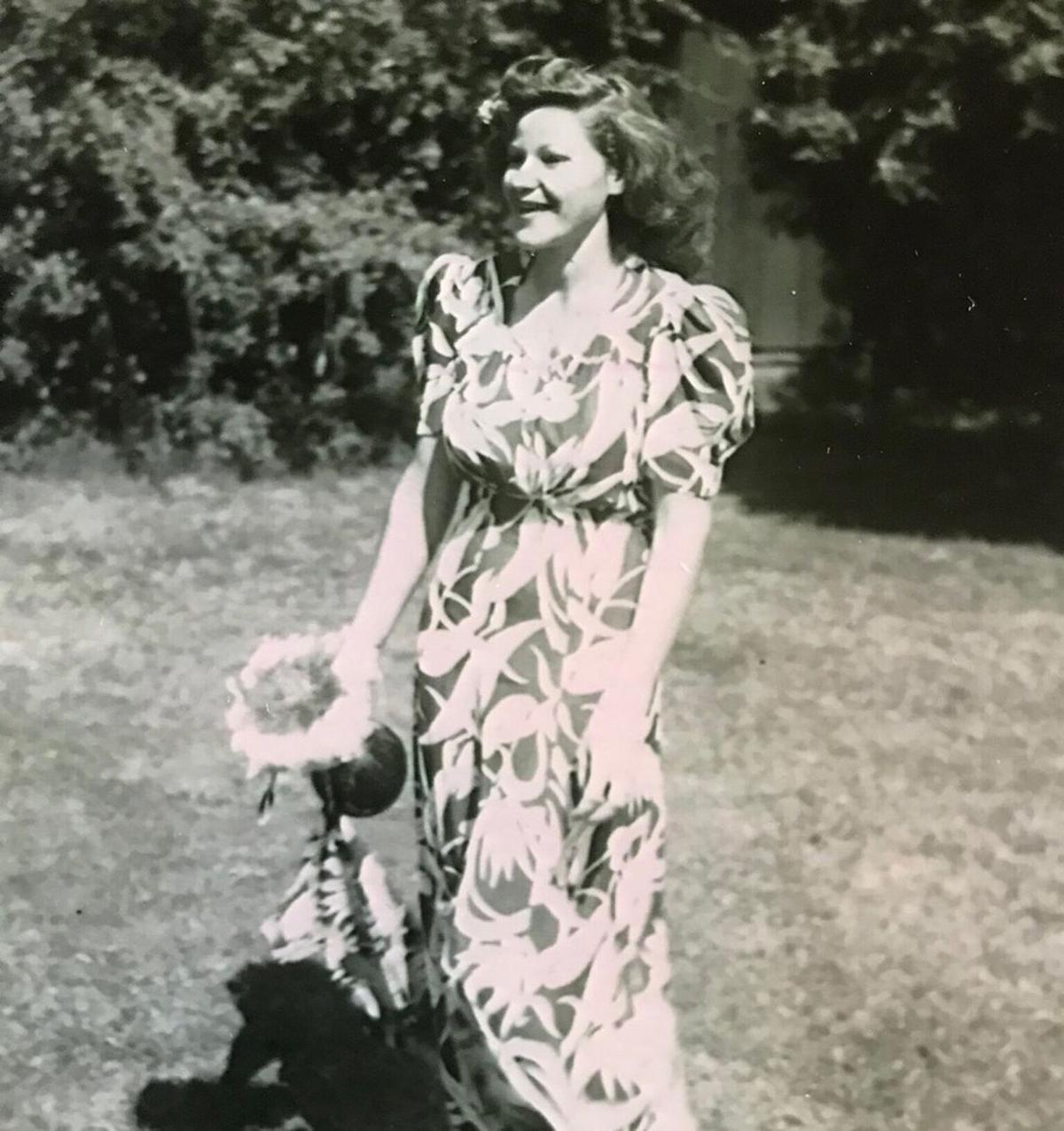 Virginia as a younger woman. 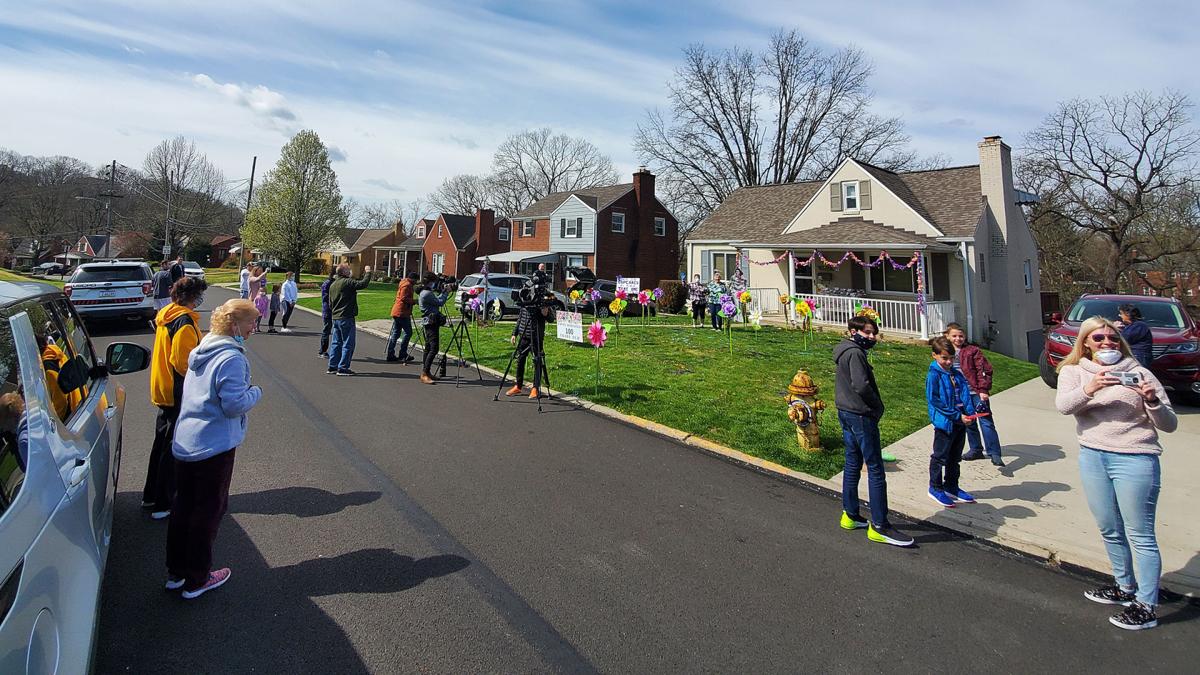 Virginia Flickinger’s family presented her with a cutout image of herself back in the day.

Young relatives of Virginia Flickinger highlight the purpose of the gathering.

Virginia as a younger woman.

For a long while, Virginia Flickinger’s relatives had April 12, 2020, circled prominently on their calendars.

“Over the last two weeks, we knew this was coming, and the question was: What are we going to do?” her grandson Chris Flickinger said, referencing the widespread changes in plans caused by COVID-19. “We can’t just let a hundred-year milestone go by unacknowledged.”

So the day before Virginia marked a century since her birth, a properly socially distanced party of sorts took place along the street in front of her Mt. Lebanon home.

“We figured it would just be some family members, and we’d keep our distance,” Chris, who lives in South Strabane Township, said. “But we have this hundred-year-old birthday celebration that is unfolding over the distance of a hundred yards. With all the people who showed up, you had to be spread out over the size of a football field.”

Despite it being a bit chilly, the weather cooperated for the most part, and Saturday’s late-morning sunshine certainly lent itself to the festivities.

“Virginia is a very independent, active and vibrant spirit, always wears colorful clothing and scarves. So we had all of these very bright, vibrant spring colors and flowers all over the front yard, and it matches her personality,” Chris reported. “The other thing is that she’s extremely social.”

And so plenty of neighbors and friends, and even police officers from nearby communities, showed up to help commemorate her special occasion.

On April 12, 1920, she was born in Honolulu, at the time the capital of the Territory of Hawaii. Twenty-one years later, she was working part-time as a professional hula dancer and full-time as a nurse’s aide at nearby Naval Hospital Pearl Harbor.

The morning of that Dec. 7, she was at home in Waikiki when she heard bombs exploding in her neighborhood. At that point, all civilians were told to flee to the mountains in anticipation of a Japanese invasion.

Two days later, she returned to work at the hospital and supported the nurses in the aftermath of the attack that prompted the United States’ entry into World War II.

In 1953, she married Ray Flickinger, and they moved to Pennsylvania when he went to work directing the ROTC program for Washington & Jefferson College. Their three children – Glenn, Tom and Kathy Flickinger – grew up in Washington.

Virginia also has two sons, Bill and John Barber, by a previous marriage, along with 10 grandchildren and 10 great-grandchildren. After Ray died in 1985, Virginia moved to Allegheny County.

“She spends half the year here, and then she spends the other half of the year between Hawaii and San Diego,” Chris Flickinger said, adding ironically: “Yeah, she’s got it really tough.”

And wherever she’s living, he noted, it’s own her own.