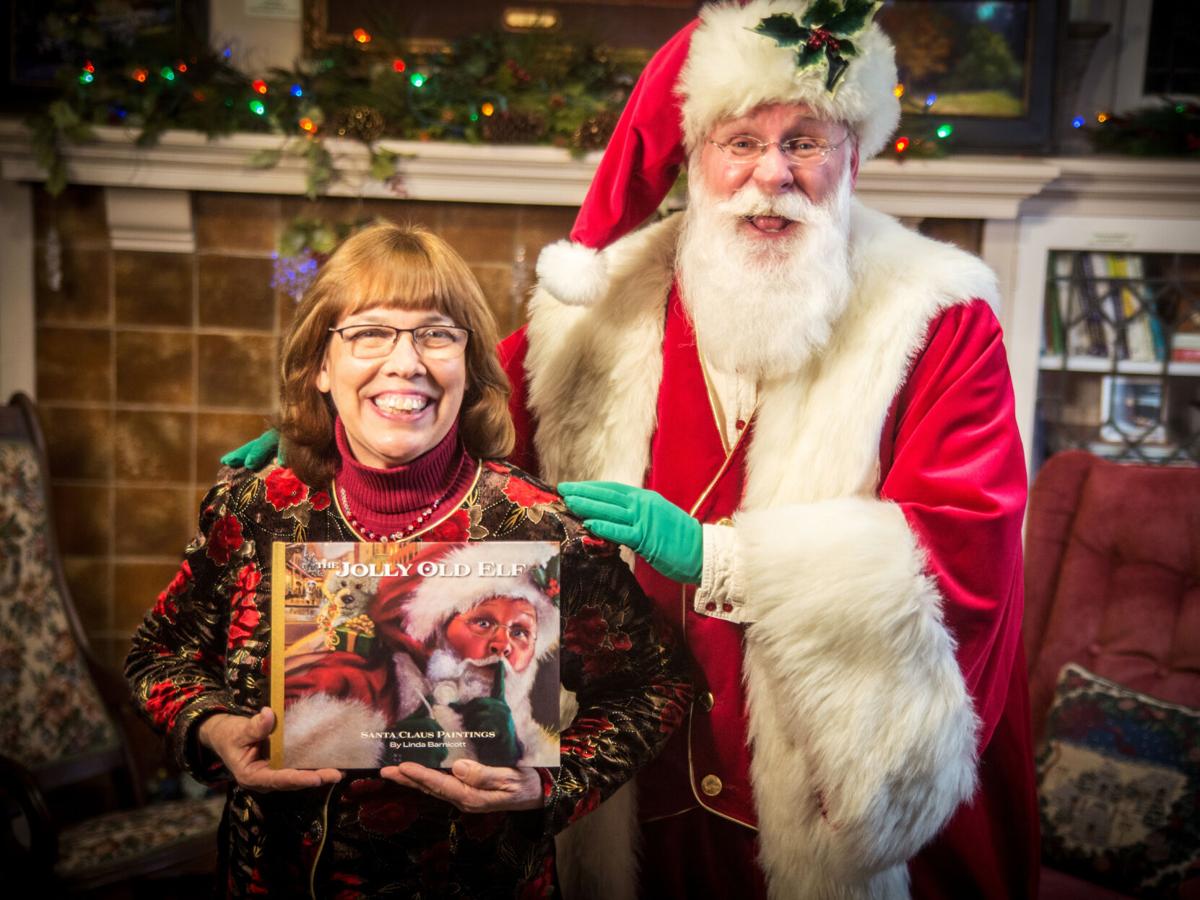 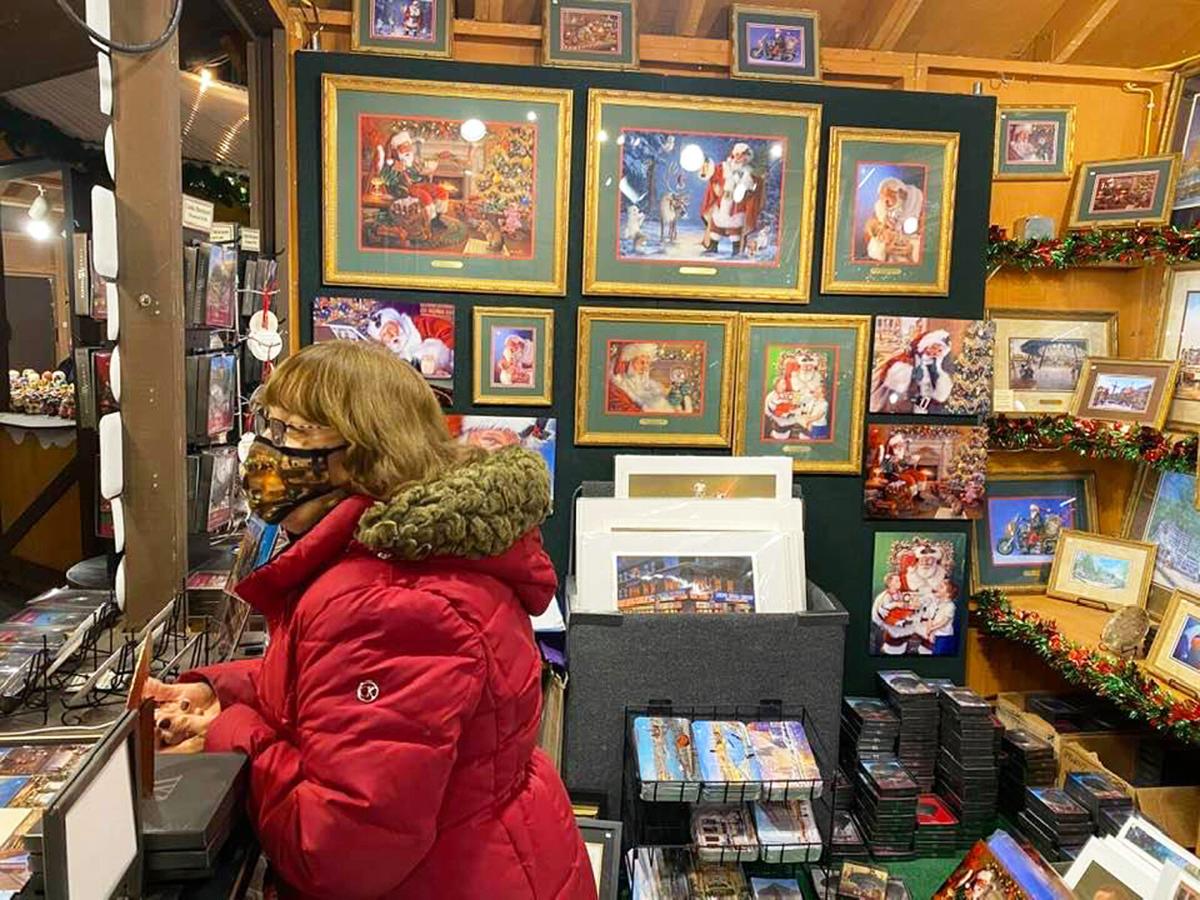 Linda Barnicott displays her work at the Peoples Gas Holiday Market, which closed early this year because of COVID-19. 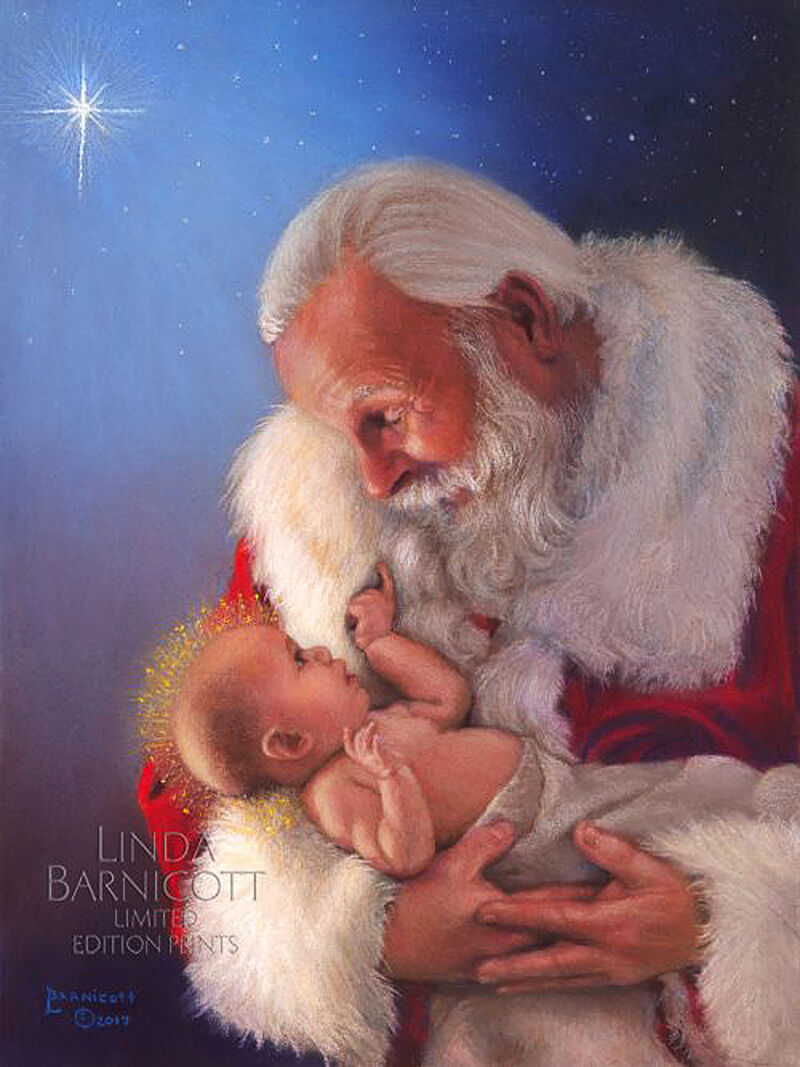 “Santa and the Greatest Gift” by Linda Barnicott 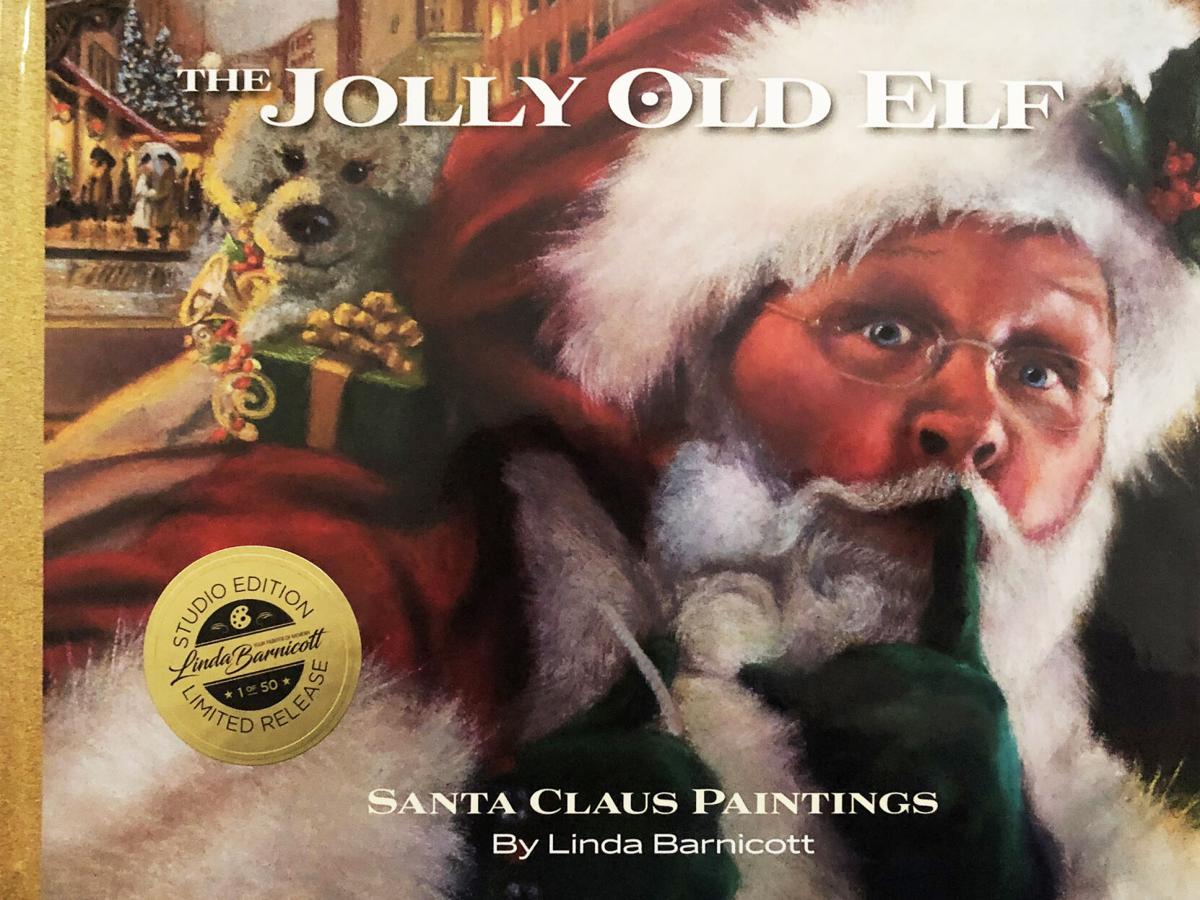 Artist Linda Barnicott has produced her first book in time for Christmas 2020. 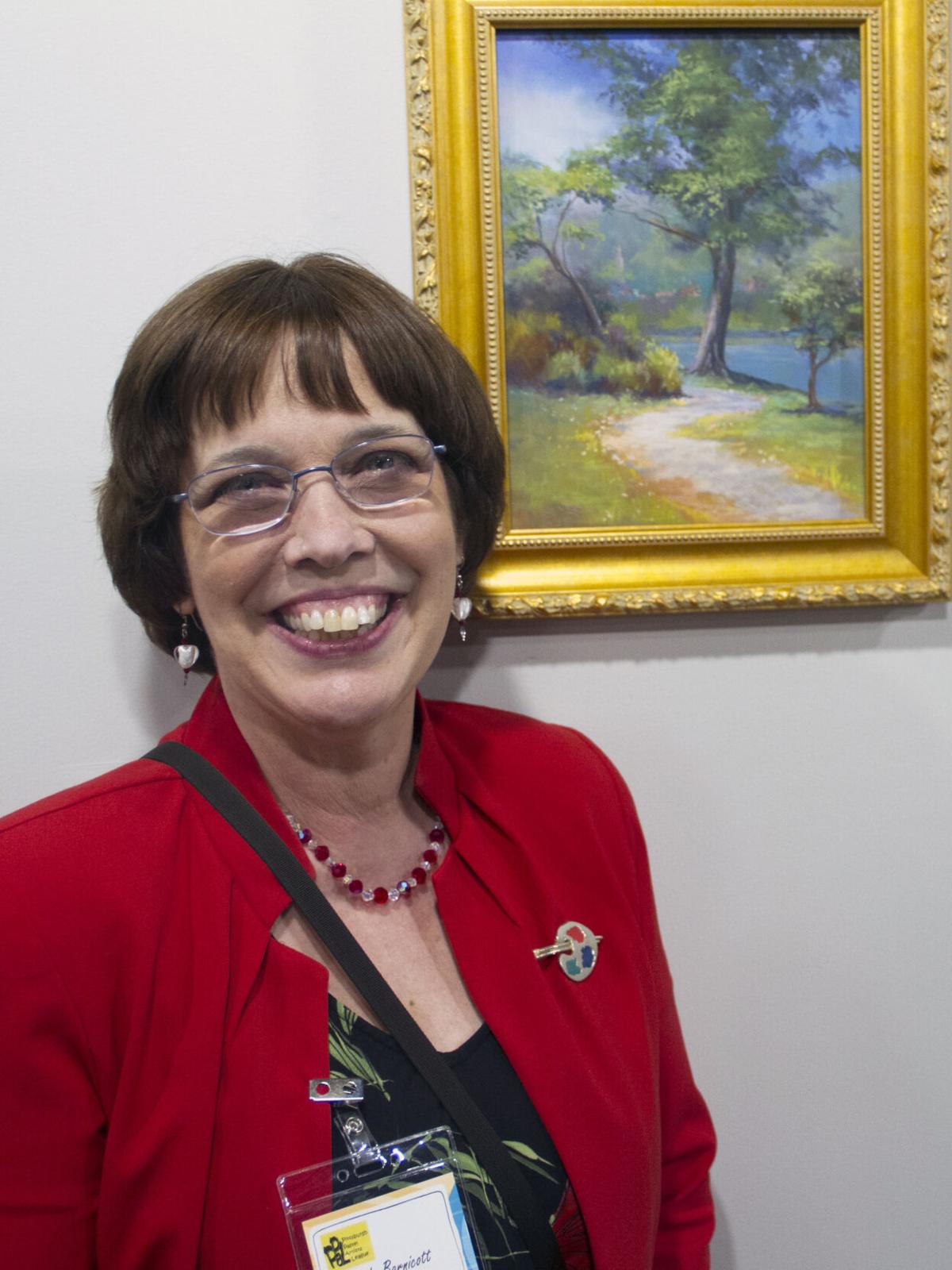 Looking back: Linda Barnicott displays her work as part of a Pittsburgh Pastel Artists League exhibit in 2017. 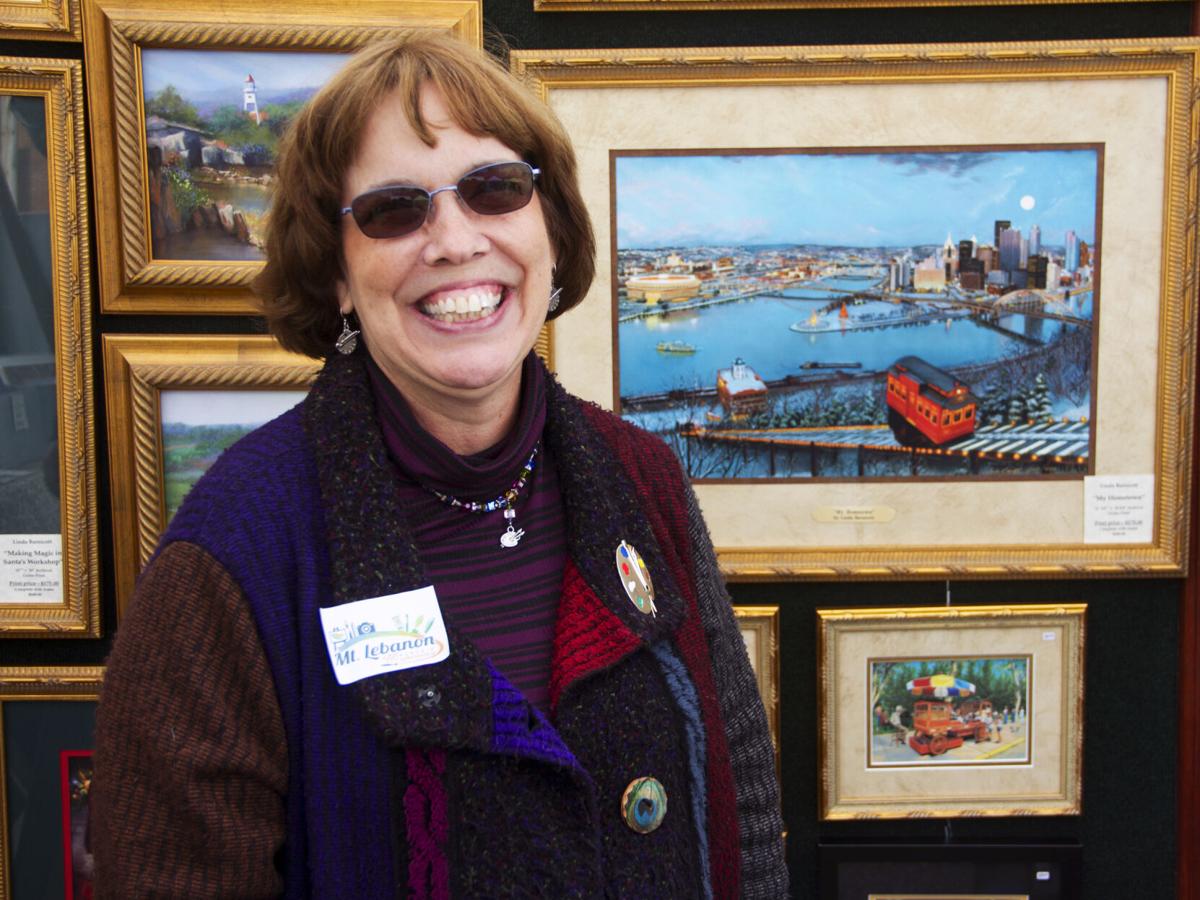 Looking back: Linda Barnicott displays her work at the Mt. Lebanon Artists Market in 2018.

Linda Barnicott displays her work at the Peoples Gas Holiday Market, which closed early this year because of COVID-19.

“Santa and the Greatest Gift” by Linda Barnicott

Artist Linda Barnicott has produced her first book in time for Christmas 2020.

Looking back: Linda Barnicott displays her work as part of a Pittsburgh Pastel Artists League exhibit in 2017.

Looking back: Linda Barnicott displays her work at the Mt. Lebanon Artists Market in 2018.

Picturing what Santa Claus does during his offseason, may include him playing a round of 18.

That particular scene occurred to pastel artist Linda Barnicott while she was progressing on what became a five-year series of special Christmas paintings, and she planned to have a photograph taken on which to base her brushwork.

“But I didn’t have a golf club,” said the former Bethel Park resident, who now lives in Brentwood.

So she borrowed one from a neighbor and, following the photo session, promptly returned it to the golf enthusiast, who had a surprise in store.

“When she opened up her garage door, there was a Fat Boy Harley. We were all so excited. It was like, can we borrow your motorcycle?” Barnicott recalled. “I ran home and got a wreath for the front, and we tied Santa’s hat back so it looked like he was flying through the air. Later, we filled his sack up with a lot of vintage toys, like a train and a plane and a doll, and we made it nice and full.”

So goes the origin story for “Santa’s Joyride,” one of Barnicott’s 10-painting “Jolly Old Elf” Series, which she produced in pastel from 2015-19 from photographs taken in a variety of contexts.

The story of how the series came to be, the preparation that went into each of the paintings and a whole lot more was chronicled in her first book, “The Jolly Old Elf: Santa Claus Paintings.”

Of course, the foremost feature are depictions of the paintings, themselves, displayed in colorful detail amid other goodies within the volume’s 48 pages.

Known as the Pittsburgh’s “Painter of Memories,” Barnicott has produced a long line of works celebrating the region, from her renowned “Meet Me Under Kaufmann’s Clock” in 1989 to the recent “Remembering the O,” depicting the Original Hot Dog Shop in Oakland, which closed in April.

The Santa series started as a result of her participation in the launch of what has become an annual favorite, the Peoples Gas Holiday Market at Pittsburgh’s Market Square. As a vendor at a summer event nine years ago to announce the market’s opening, Barnicott heard the booming voice of a veteran portrayer of ol’ St. Nick.

“It stopped me right in my tracks, and I thought, he is such a great Santa. I’ve got to get my picture taken with him,” she recalled. “I actually still have that picture somewhere.”

They struck up a friendship, and during the market’s second holiday season, they talked about working on a series of paintings together. Then Santa John, as everyone knows him, introduced Barnicott to two young photographers who were portraying elves at the market’s Santa’s Workshop.

“We thought if we all got together the Saturday after Christmas, the decorations would still be up and we’d be able to do what we needed to do,” she said about the event’s aftermath. “So we all met, and about 10:30 in the morning, we started brainstorming and just really thinking about all the different ways we could portray Santa.”

The result was five years’ worth of two paintings annually, one a larger-sized limited edition featuring “a lot going on, something that you could just lose yourself in for a long time,” Barnicott noted, and the other a 9-by-12-inch print.

“Santa’s Joyride,” for example, turned out to be the companion piece to the second year’s “Santa’s Workshop,” another project that required some assistance for the sake of the photography aspect.

“I put a call out for anybody who might have a workshop,” Barnicott said, and stepping forward was a member of the congregation of First Bethel United Methodist Church, at which her husband, the Rev. Tom Barnicott, served as pastor before his retirement.

“We brought two carloads full of decorations. We took 1,200 pictures, undecorated and then we left, within two hours,” Linda recalled. “In the painting were different items from our past. I have my dolls and my skates, my husband’s ball and glove, and his grandmother’s bubble lights.

Santa John contributed a tool that had been in the family for generations and was used for a historic purpose.

“His grandfather had worked at Kaufmann’s and was called out to help build Fallingwater,” Barnicott said. “So this tool is over a hundred years old.”

Tales of that type abound in the book, which generally presents the primary subject in a playful manner.

“There’s a serious Santa, but he’s the impish Santa, with a twinkle in his eye,” the artist said. “He just makes you happy.”

A bit of a departure is “Santa and the Greatest Gift,” featuring as a model the Barnicotts’ first grandchild, Aria Grace Stadelman.

“We decided that we would try to do a painting with Santa holding Baby Jesus. She didn’t have hair, so she could be a boy or girl,” Linda said.

And so Santa John cradled Aria Grace, with her grandmother wielding the camera.

“For a few moments, they were eye-to-eye. And I caught it,” she said. “I’m a really lousy photographer, so the picture was actually blurry and yellow.”

As evidence, she includes the photo in the book, to serve as a contrast with her artistic talents that are evident in the finished painting.

Among the larger paintings, Barnicott wrapped up the series last year with “the one that I had been waiting to paint. It’s called ‘Santa’s Woodland Christmas.’”

She had taken and/or collected photographs of different kinds of animals, from rabbits and squirrels to snow owls and polar bears, and used them as the basis for a winter outdoors scene with Mr. Claus. The painting is accompanied by a warmhearted description of the artist’s vision.

”As legend goes, on Christmas Eve a miracle happens throughout the animal kingdom. Sometime during the wee hours of the morning, the animals are gifted, but only for a short time, with the ability to talk to each other.

It is an amazing site to behold.

Santa, on the other hand, can speak and understand all animals at any time, and he loves to bring them gifts. This year, his reindeer Prancer, who loves visiting his woodland friends, is happy Santa invited him to come along.

As Santa announces that he’s brought treats for everyone, all the animals are filled with joy! It is truly a Christmas miracle that they are well fed and all living in peace on Christmas morning.”

“The Jolly Old Elf: Santa Claus Paintings” includes similar tales throughout, adding another dimension to the artwork, and also features an interactive section: “Hidden Treasures,” in which children can scrutinize paintings to find various surprises contained within.

Designing the book was Harold Behar, a principal in the advertising and marketing firm Behar Fingal, located in Pittsburgh’s North Side.

“He’s a genius, for one thing. I tell him that all the time,” Barnicott said. “He took everything that I dreamed about, and he created it to be something I could never even envision.”