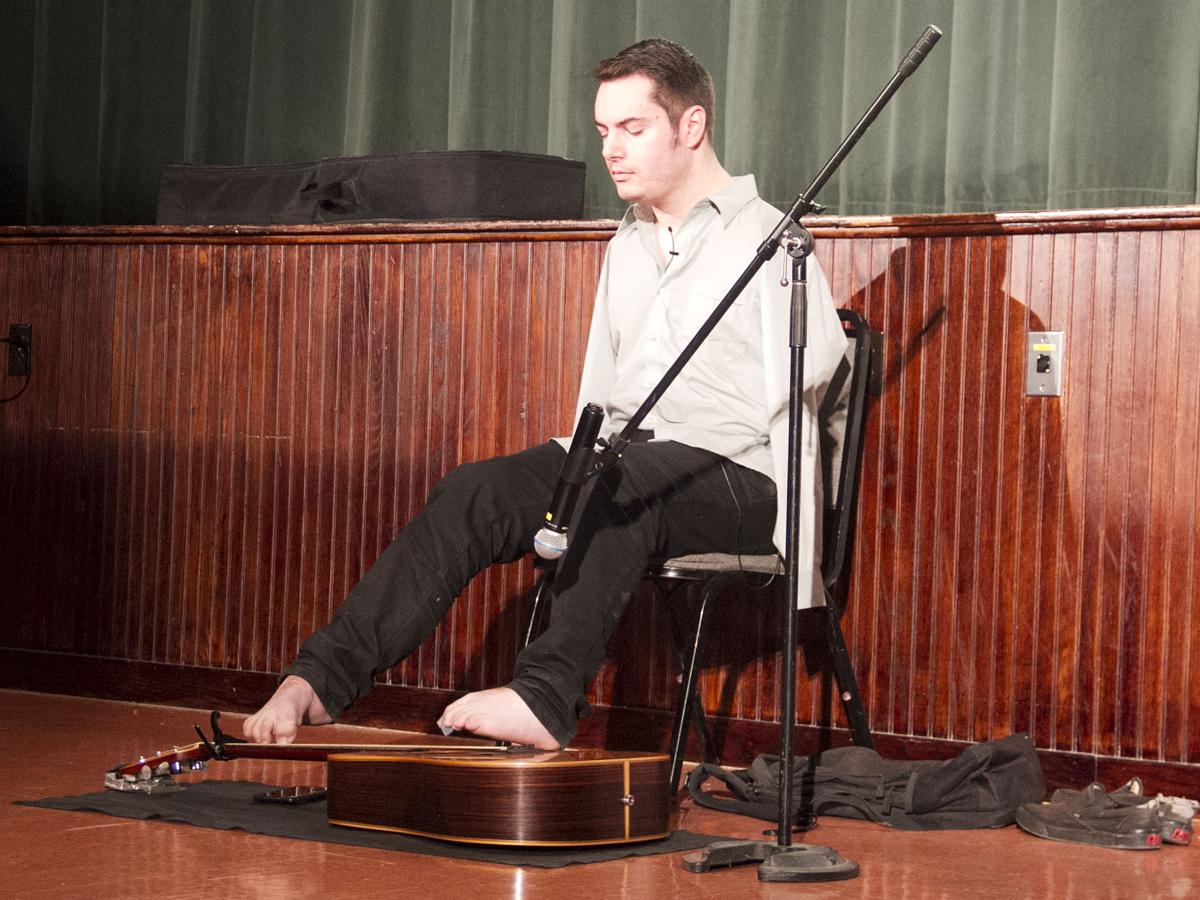 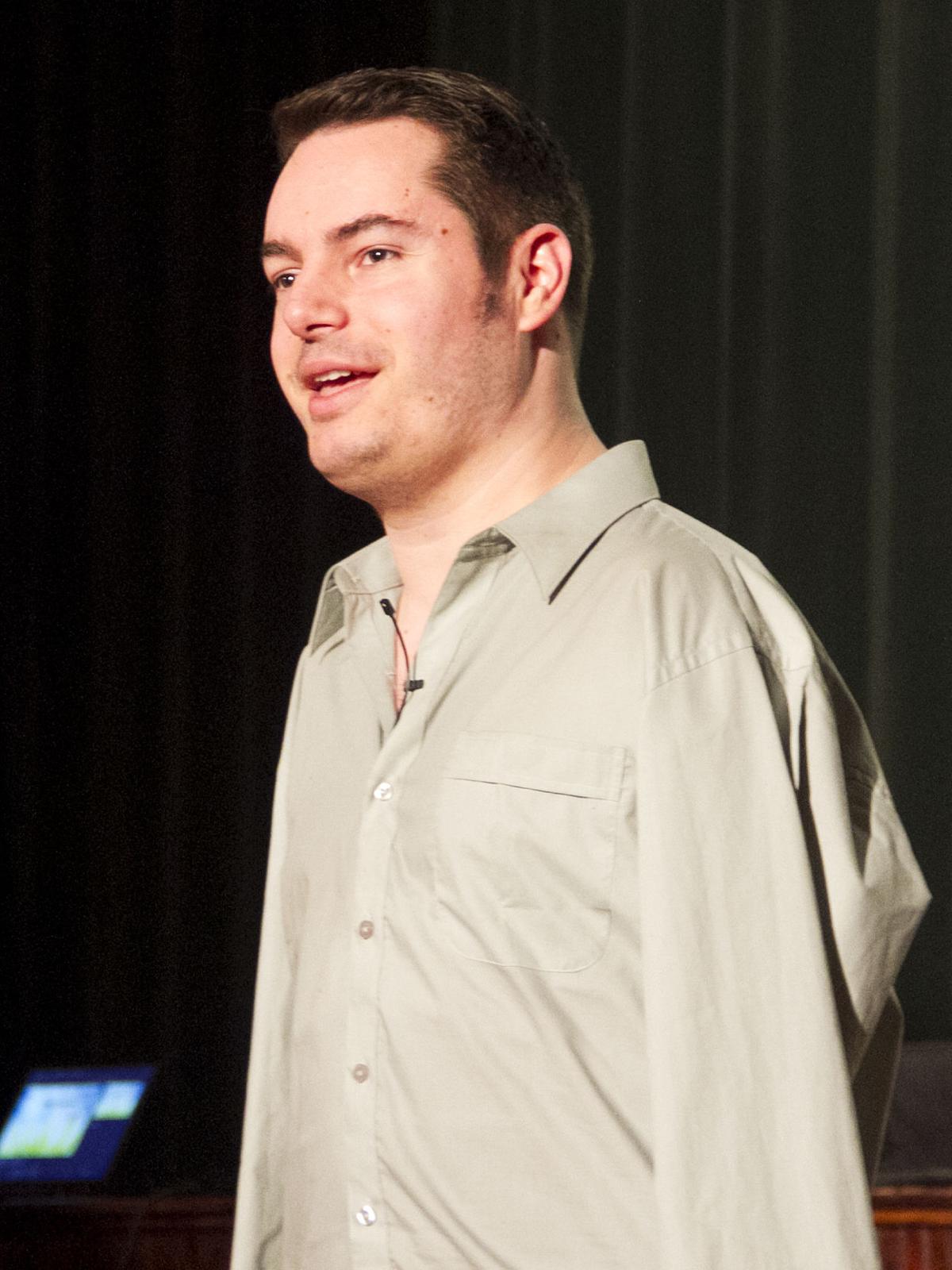 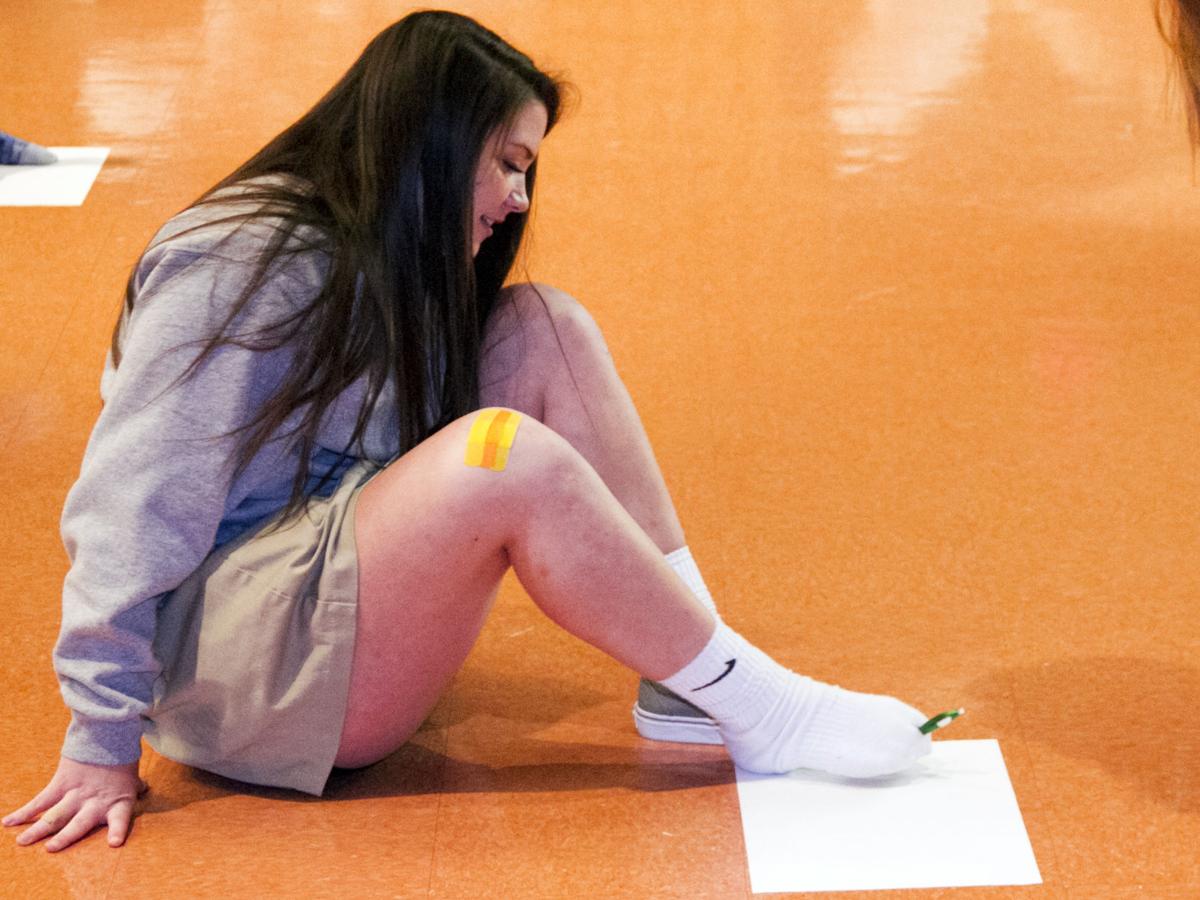 Seton LaSalle High School student Bella Grimm attempts to write her name with her foot, as per George Dennehy’s request. 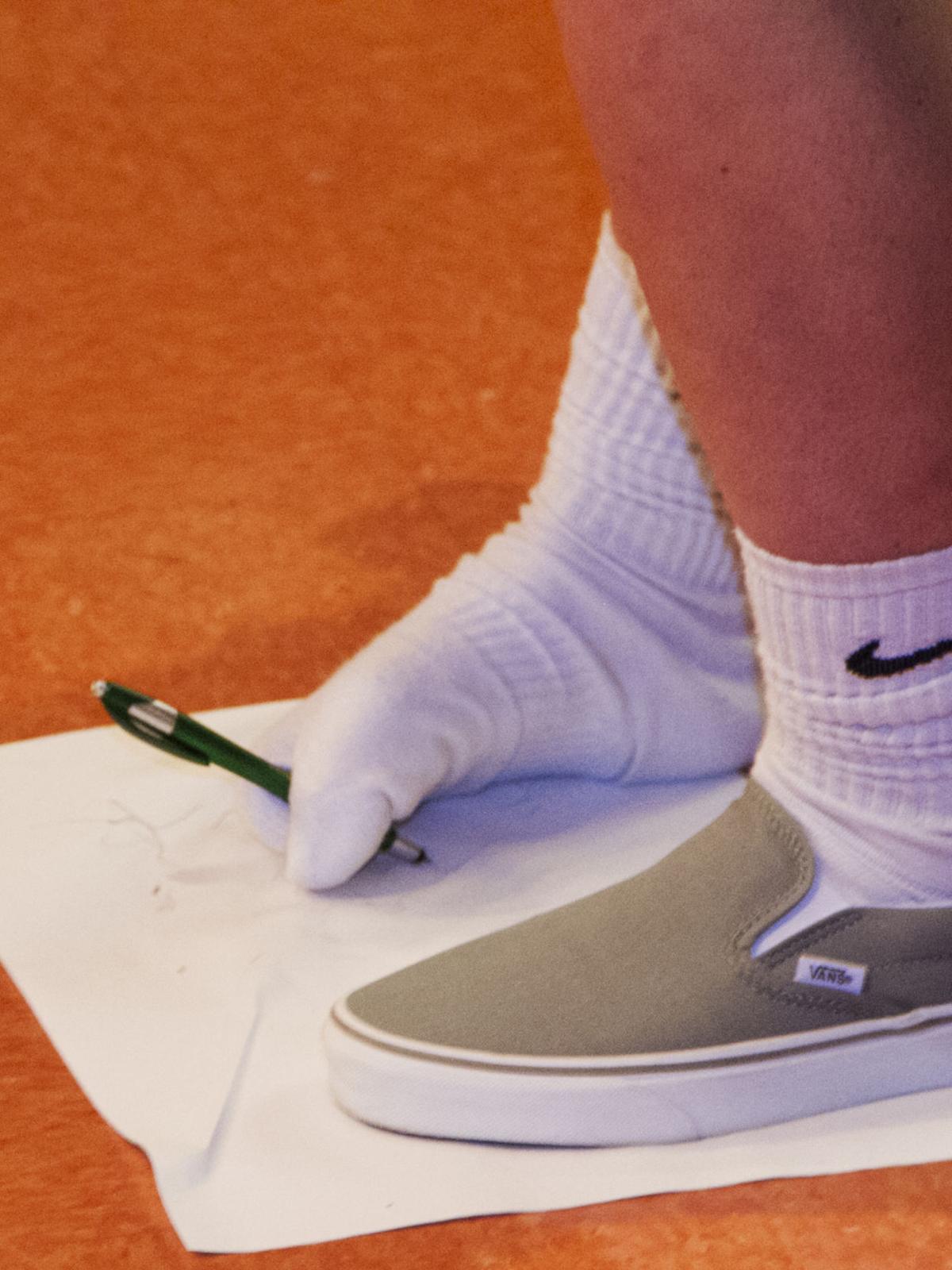 Another student tries to write her name with her foot. 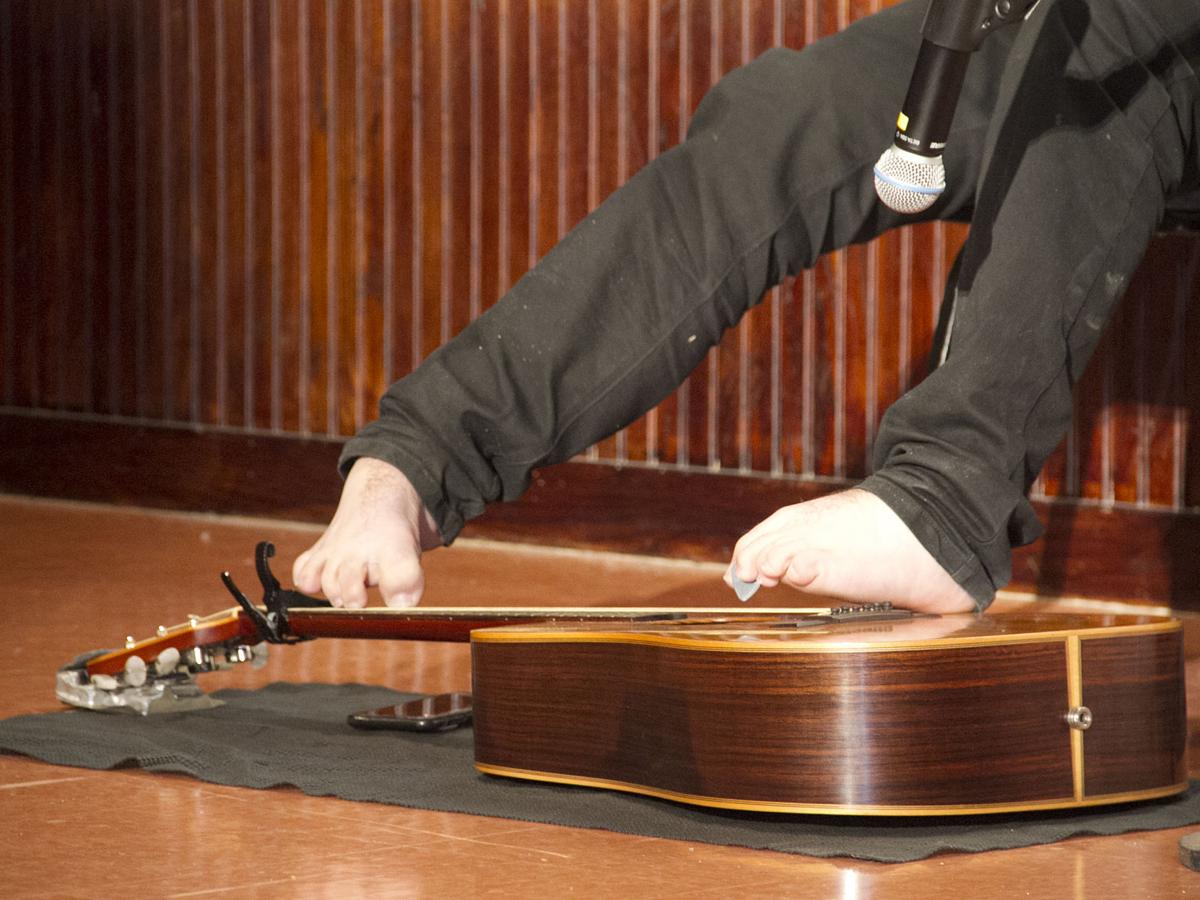 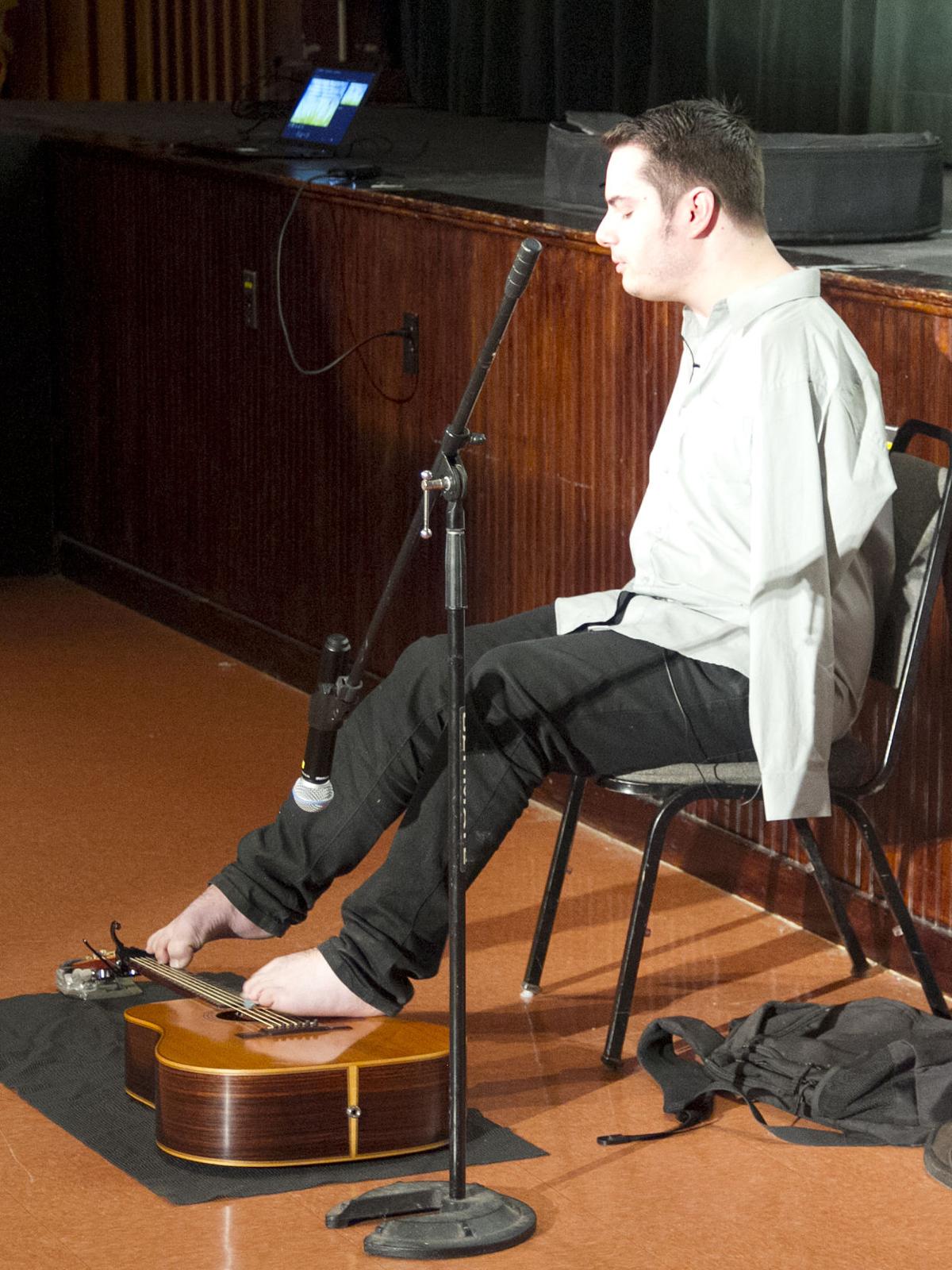 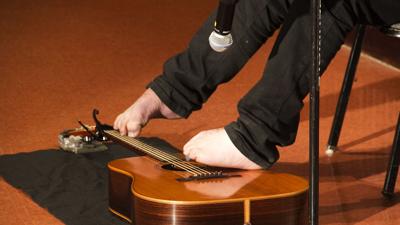 Seton LaSalle High School student Bella Grimm attempts to write her name with her foot, as per George Dennehy’s request.

Another student tries to write her name with her foot.

For anyone who thinks learning to play a musical instrument is too challenging, meet George Dennehy.

He brought his guitar to Seton LaSalle High School in Mt. Lebanon Tuesday, entertaining an auditorium full of students and faculty members with a couple of inspirational songs, closing with an original composition with an autobiographical theme, “Not Abandoned.”

In fact, he has released a compact disc containing a variety of his tunes, with the cover photo of “Have My Heart” prominently displaying an aspect of Dennehy that especially makes listeners take note of his musicianship:

He has no arms.

With two toes gripping a pick, he uses his left foot to strum and his right to form chords, in standard tuning, no less. And his impeccable playing, often accompanying his singing, has been known to prompt veteran guitarists to tell him:

“I’ve been playing for decades, and you’re better than I am.”

That also probably applies to piano, bass guitar, cello and other instruments Dennehy has taught himself to play. He also is self-taught when it comes to driving a vehicle.

“I kind of just sit with one foot on the wheel, and my left foot’s on the gas pedal,” he told the Seton LaSalle audience. “I’m so good at driving that I thought about becoming an Uber driver, just to see people’s reactions.”

He has quite the sense of humor, which he uses to break the ice when giving presentations about himself.

And it doesn’t take long for those in attendance to start viewing him as pretty much of a regular guy in his mid-20s, paying much more attention to what he has to say than his appearance.

His visit to Seton LaSalle, for a program also attended by a group of Bishop Canevin High School students, took place in advance of many of the teens planning to travel to Washington, D.C., for the annual March for Life.

Considering the way he was born, Dennehy takes a strong position with regard to the march’s topic.

“I believe that God creates each and every one of us with a plan and with a purpose, and that we’re all unique and distinct,” he said. “Nobody’s an accident. Nobody’s a mistake.”

He was considered that, and worse, as an infant in his native Romania, where he actually was abandoned.

“They thought that somebody like me is cursed by God,” Dennehy said. “They believed that someone like me is not fully human.”

His biological family quickly dispatched him to an orphanage, at which he was treated coldly, to say the least.

“These nurses in the city of Timișoara, they really thought I had evil spirits living inside of me because I didn’t have arms,” he said. “It was that drastic, their belief system.”

He explained that the nurses would put bottles in the crib, but no one would hold him. A doctor visiting the orphanage claimed there was no hope for him and even started what would turn out to be an extremely premature death certificate.

Then Michael and Sharon Dennehy of Richmond, Va., who already had three children of their own, saw his photograph in an adoption newsletter, with a short bio that concluded with: “This boy will soon die …”

“I really focused in on the three dots at the end of it,” George said about the ellipsis, with the thought of, “Maybe this isn’t the end of the story here. My parents, with their selfless act of love to rescue me, they filled in the dots.”

The Dennehys went on to adopt nine more kids from five other countries, including a boy from India whom they named James and who also was born without arms.

Being in such a situation hardly deterred George from learning to do what others can. He began playing the cello at age 8 and eventually with regional orchestras.

As a teenager, he posted a video of him playing and singing a cover version of “Iris” by John Rzeznik of the Goo Goo Dolls, giving millions the opportunity to see and hear his distinctive talents.

Yet, he admitted to going “down a very dark path” while in high school, asking himself questions along the lines of “Does God really love me? Was I supposed to be born? Should I have just died in that orphanage? What purpose do I have?”

“But over time, I began to change the way of thinking that I had. I really feel like the Lord started to work on my heart, and not just my heart, but my mind,” he said, with his resulting point of view: “You know what? I’m wasting all this time feeling sorry for myself. Instead, maybe God has made me like this for a purpose. Maybe God can still use me despite my disability.”

And so he travels around the country to inspire audiences, display his abilities and, as he mentioned, have fun along the way.

As another Seton LaSalle icebreaker, he invited seven students to the front of the auditorium for a seemingly simple exercise.

“I want you to try to write your names with your feet,” he told them.

It turned out not to be so simple, at least for anyone in the room not named George Dennehy.

While his intent was to provide a series of positive messages, especially regarding the value of human life, he admitted something to his audience.

“I don’t want you to think I’m here with all the answers and that I have it all together,” he said. “I’m still learning. I just hope that anything I say, anything I sing, can be somewhat of an encouragement to you.”