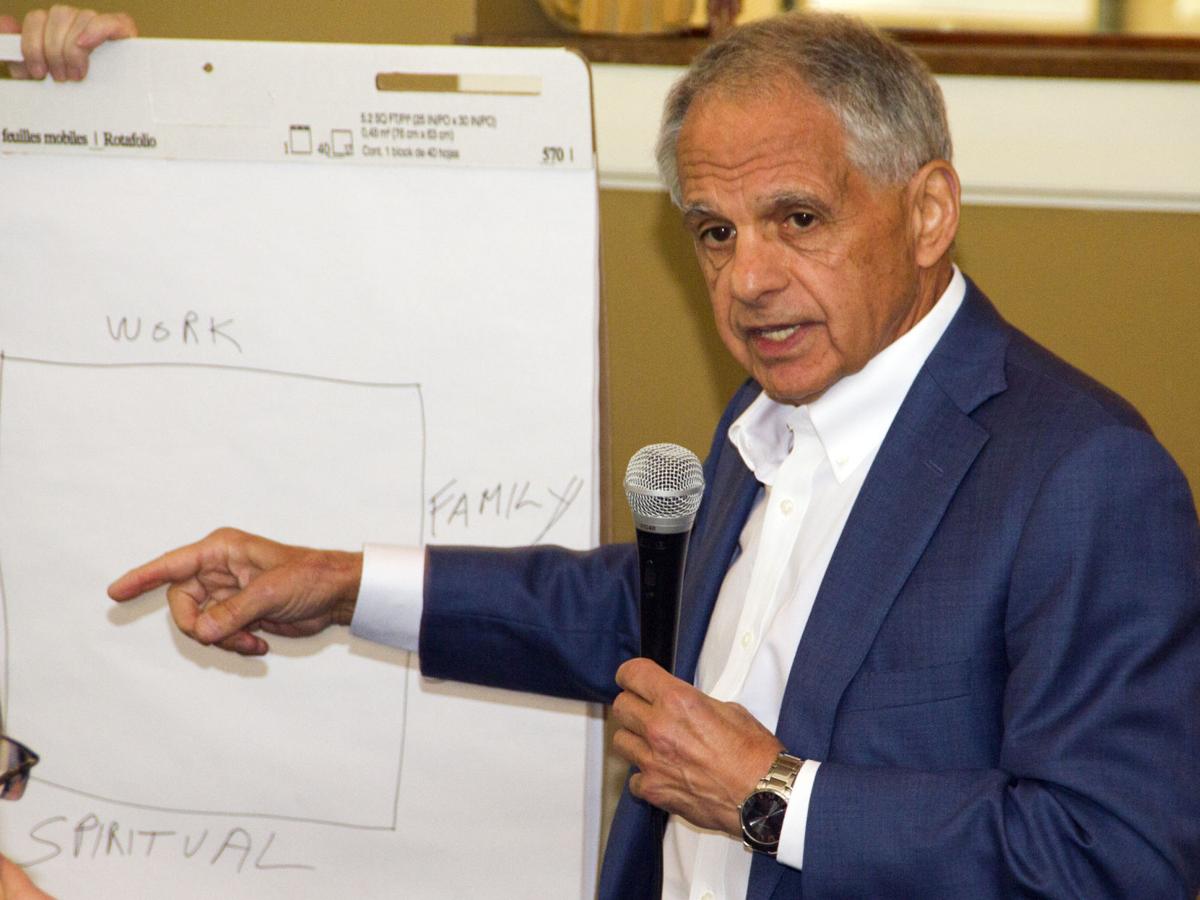 Dr. Joseph Maroon demonstrates the philosophy behind his new book, “Square One: A Simple Guide to a Balanced Life.” 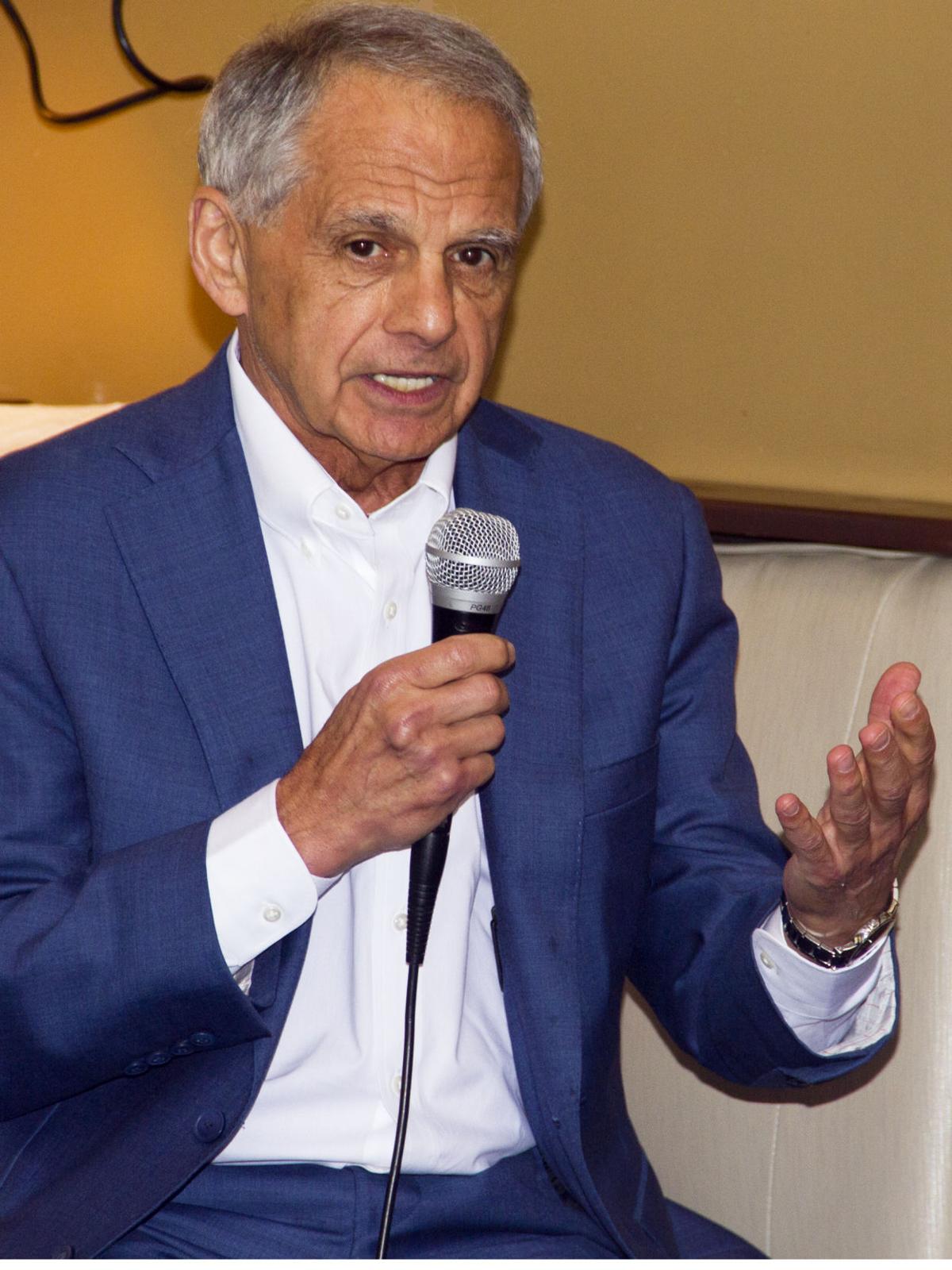 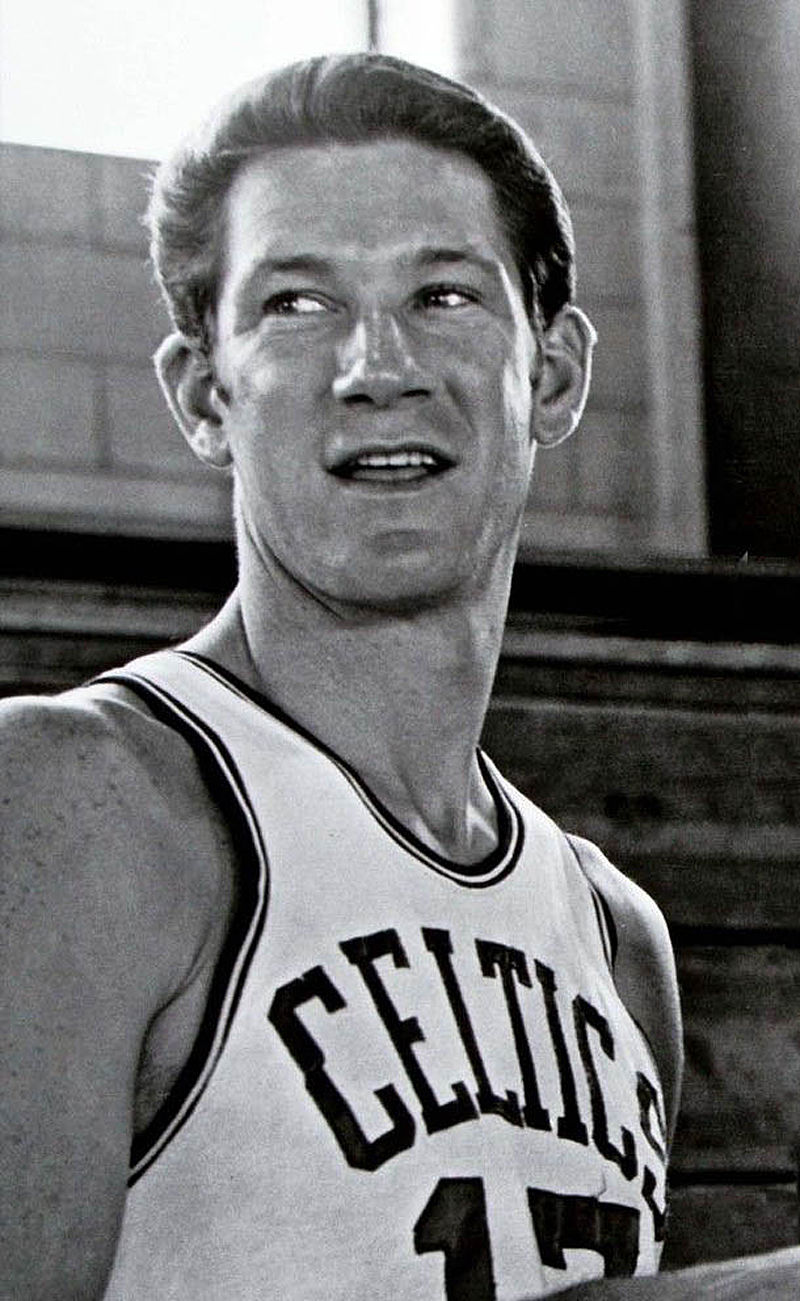 After his retirement, a famed Pittsburgh Steelers receiver became the first National Football League player to compete in the Kona Ironman Triathlon in Hawaii.

Prior to the event, the septuagenarian had some choice words for the Super Bowl XL Most Valuable Player.

“He was worried,” Maroon added of retired Steelers great Hines Ward. “He was a little concerned that this old guy might just beat him in that race. It ended up that he did beat me by not much, but he did win.”

If there’s any question as to how a man of 70-plus possibly could run, swim and bike neck-and-neck with a retired athlete in his 30s, Maroon provides details in his new book, “Square One: A Simple Guide to a Balanced Life.”

Speaking at the monthly Good Guys luncheon hosted by author Jim O’Brien at Atria’s Restaurant in Peters Township, Maroon discussed the peaks and valleys that have been his life, and how the lessons he learned can help others improve their lives.

At the root of “Square One,” he explained, is a book he received in high school but didn’t read until a few decades later. “I Dare You!” by Ralston-Purina founder William Danforth (1870-1955) presents four key components in life need to be in balance, and as adapted by Maroon, they are work, family/social, spiritual and physical.

The “square” refers to a diagram of smaller squares representing each of the components, with Ralston’s dare being to keep all in balance.

“He said, ‘Now, I want you to draw a line commensurate with how much effort you put on each one of these in a day,’” Maroon said about the book. “When I drew mine, it was a straight, flat line: no family, no spiritual and no physical. It was all work. It was the ultimate experience of burnout, which occurs in 50 percent of physicians.”

That was during the ultimate valley of Maroon’s life. His father died unexpectedly at age 60. His marriage broke up, “and I was totally incapacitated. I could no longer do neurosurgery,” he told the luncheon attendees.

Instead, he went to work at the truck stop near his native Wheeling, W.Va., his father had bequeathed to his mother.

“One week, I’m doing brain surgery on awake patients at Presbyterian Hospital,” he said. “And the next week, I’m filling up 18-wheelers and flipping hamburgers and wondering: ‘How did a nice guy like this get here?’”

Returning to where he had been started with a friend’s invitation to go for a run.

“I said, ‘Run? I can’t walk. I’m 20 pounds overweight. I have a very difficult time climbing steps,’” Maroon said. “But he said, ‘Come on. You need to do this.’ And I found a pair of sneakers and a pair of scrubs, and we went down to the Triadelphia High School track” in Wheeling.

“I made it around four times, somehow, was exhausted, wiped out, said never again. But that night was the first night I slept in four months. A little light bulb went off, and I went back the next day and did a mile and a quarter. And the next day, a mile and a half. And then two, and then three, and four and five. As the unintended side effect of physical activity, I started to lose weight. My sleep was enhanced. My appetite propelled me to good nutrition, instead of junk.”

Exercise, he explained, enhances neuronogenesis, the creation of new brain cells. Stress releases the hormone cortisol, which tends to have the opposite effect.

Also helped by exercise are synapses, the connection between brain cells, and neuroplasticity, which Maroon described as “the ability to do what Jim does with his writing, to take huge amounts of information and then focus it on a pen and put it in a book.”

As far as the spirituality component of “Square One,” Maroon said he shares a degree of such considerations with his patients.

“There’s no more stressful time in an individual’s life than when they’re lying on a gurney ready to be wheeled into the operating room to have brain surgery or spinal surgery,” he said.

So he often asks if they would like to pray, and the majority say yes.

“I can’t tell you the number of letters I’ve gotten and thanks, not because of the surgery, but because of the time it took to say a small prayer with these individuals,” Maroon said.

The athleticism that allows him to compete in Ironman events was evident as a youngster, when he played on the late-1950s baseball team at Bridgeport (Ohio) High School with two future Hall of Famers in their respective sports, pitcher Phil Niekro and the late National Basketball Association legend John Havlicek.

“John, of course, was 6-7 and 250,” Maroon said about Havlicek’s height and weight. “I was 5-6, stretching it, and 160. Woody Hayes looked up at John, put his arm around him, looked down at me. The water boy showed me around Ohio State that day.”