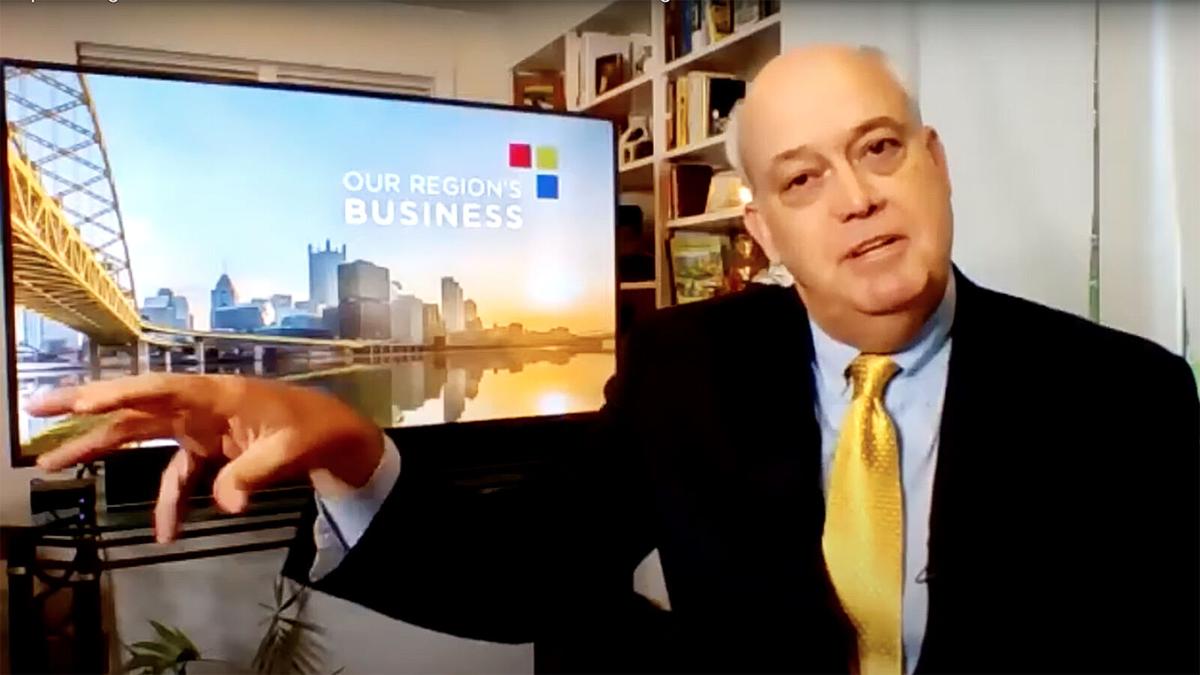 Bill Flanagan gives the virtual presentation “What’s Now and What’s Next for Our Regional Economy. 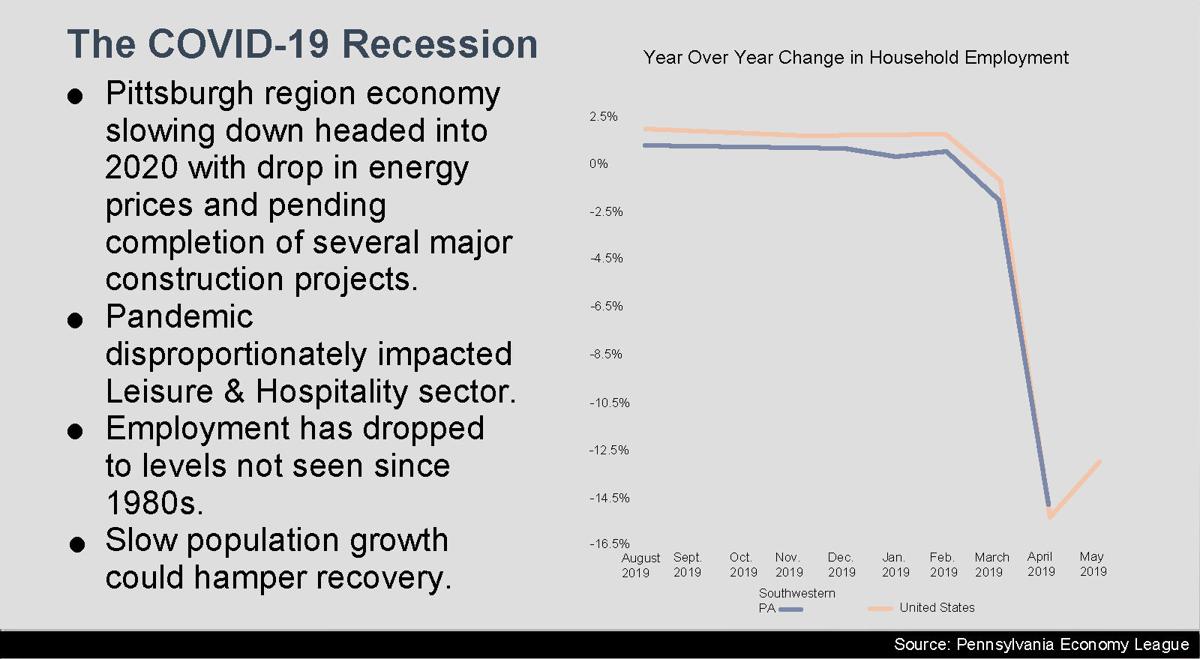 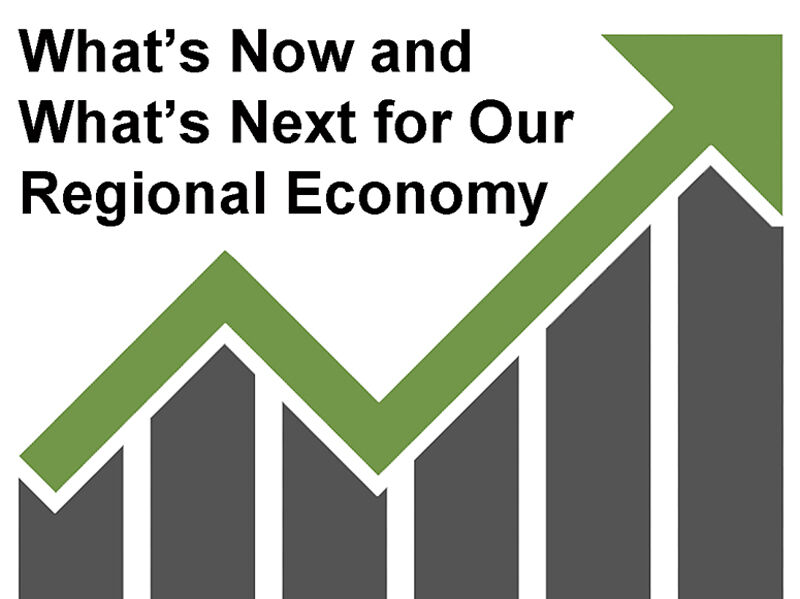 Bill Flanagan gives the virtual presentation “What’s Now and What’s Next for Our Regional Economy.

Editor’s note: This is the second of a three-part series.

The current condition of all facets of the economy is linked inextricably, of course, with COVID-19.

In Southwestern Pennsylvania, indicators of the coming trend already were in place, albeit not to such a drastic level.

“Even before the pandemic, if you looked at what was happening later last year in the regional economy, we were already slowing down,” Bill Flanagan, chief corporate relations officer for the Allegheny Conference On Community Development, said.

“Some of that was related to the drop in energy prices,” he said. “And the reality is, although we have a diverse economy, we had been riding that cyclical wave with the energy industry in a way that didn’t really happen before we had Marcellus Shale.”

Speaking about “What’s Now and What’s Next for Our Regional Economy,” the subject of a virtual program presented by the South West Communities Chamber of Commerce, Flanagan discussed the extraction of natural gas from the immense formation of sedimentary rock as a primary economic driver susceptible to market-related ups and downs.

“And then, of course, we took the wallop of the pandemic and everything that’s meant, especially in leisure and hospitality,” he said. “During that period of time, February to April, we lost 202,000 jobs in the regional economy. We’ve recovered a bit since August, but we’re still shy about 100,000 jobs of where we were before the pandemic.”

The unemployment rate for the Pittsburgh region was 8.2% in September, according to the Pennsylvania Department of Labor and Industry.

“For comparison’s sake, if you go all the way back to the 1980s and certainly the Great Recession,” Flanagan said, referring to the downturn of 2008-09, “that’s on par with what happened to the region in terms of employment loss in both of those deep recessions.”

Beyond a gloomy jobs scenario, though, are positives related to pre-pandemic growth and stability in several economic sectors.

“We believe that the pandemic and what we’re dealing with now is going to add additional drivers to some of those trends that were already emerging,” Flanagan said.

An example is life sciences, the industry built around the study of living organisms and life processes. Real estate firm CBRE recently named Pittsburgh the top emerging market for life sciences companies in the United States, based on fast-growing employment in research and development.

“They’re thinking about it from a commercial real estate play,” Flanagan said, “but we’ve certainly begun seeing investment in that space.”

On a better note, global rail and transit manufacturer Wabtec has secured 11,000 square feet of space in Neighborhood 91, a 3D-printing hub based in Pittsburgh Airport’s Innovation Campus, also in Findlay.

“Pittsburgh was one of the inventors of modern manufacturing in the first place, back after the Civil War. Now we’re in a position where we can help to reinvent manufacturing for the future,” Flanagan said. “So it’s exciting to see these types of investments happening.

“It’s also exciting to see the robot cars running around town,” he continued. “We have multiple research operations in Pittsburgh now related to autonomous vehicles.”

He cited Pittsburgh-based Argo AI, co-founded in 2016 by veterans of the Google and Uber automated driving programs. The venture is working in collaboration with Ford Motor Co., which invested $1 billion in Argo in 2017.

And Aurora Innovation, a Silicon Valley-based developer of software and hardware for autonomous vehicles, has announced plans to expand into a new Strip District facility.

Other technology-related business services, such as artificial intelligence and cyber security, also offer reasons for optimism with regard to the regional economy.

“Those are areas where we are already global leaders,” Flanagan said, “and they are areas with huge potential demand.”

Bill Flanagan, chief corporate relations officer for the Allegheny Conference On Community Development, discusses “What’s Now and What’s Next for Our Regional Economy.”