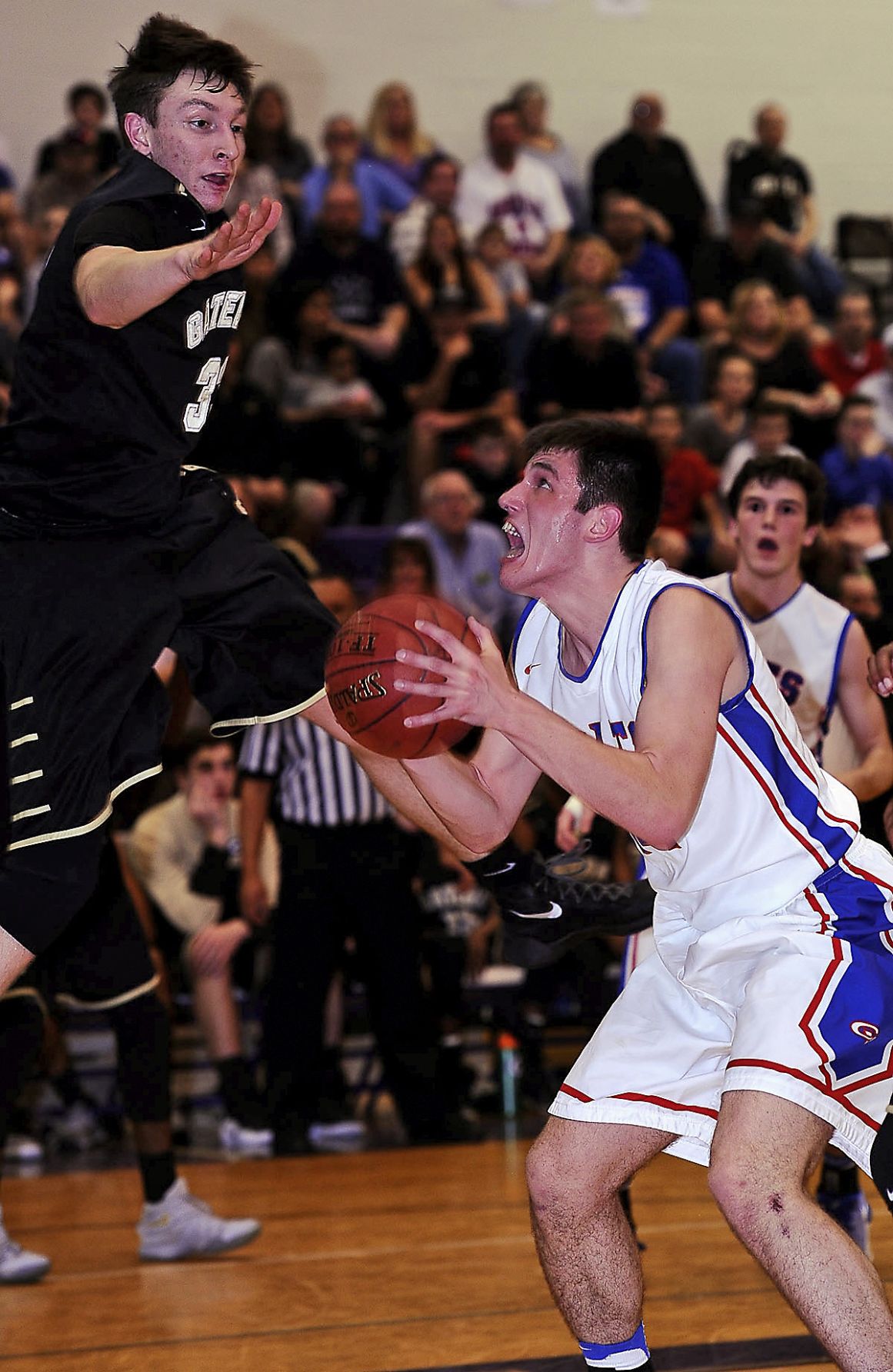 Kaleb Krebs keeps his eyes focused on the hoop despite the distracting defensive tactics by Gateway’s John Paul Kromka. Krebs played a key role in Chartiers Valley’s overtime win against the Gators. 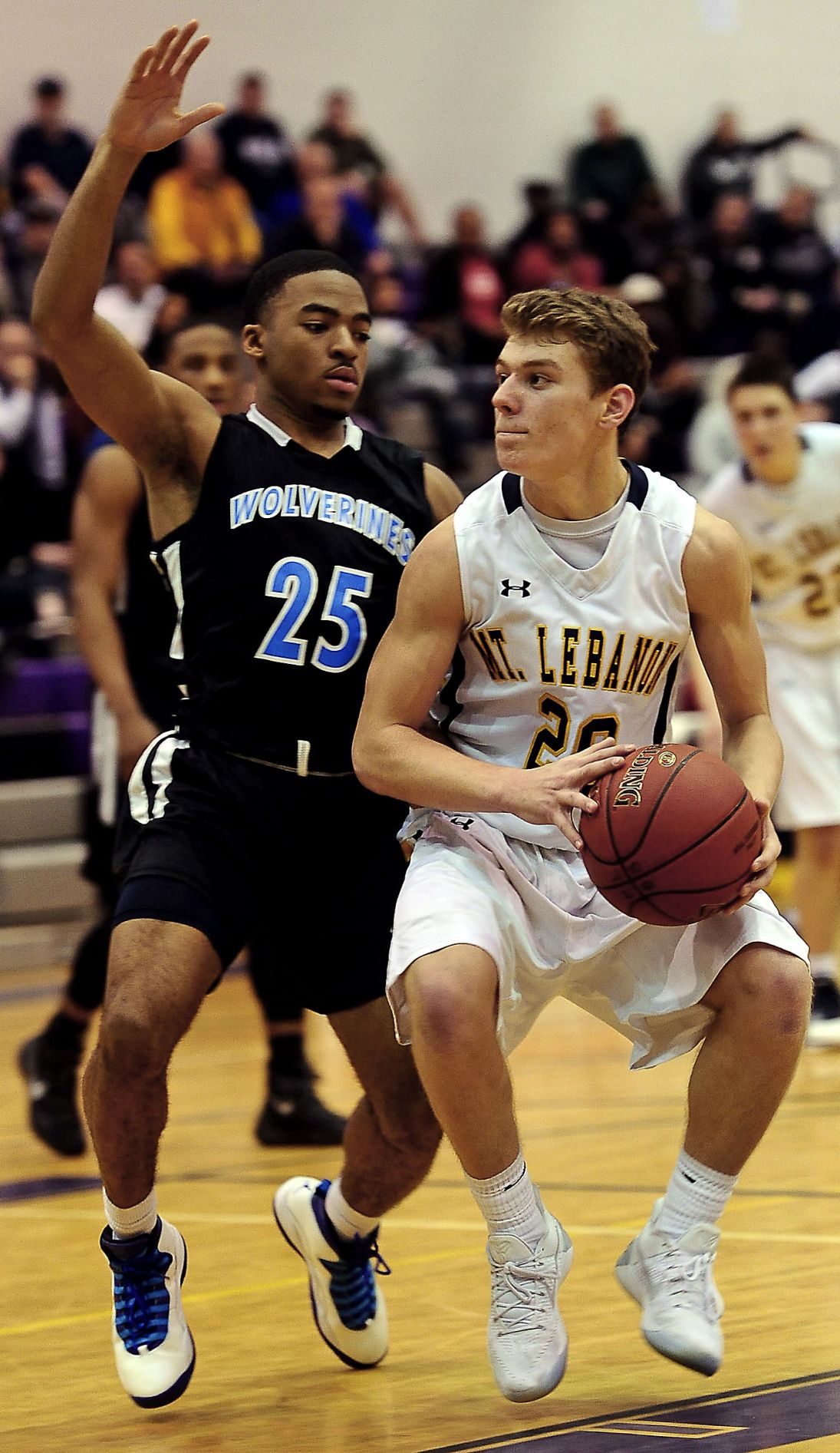 Michael Palmer drives to the basket for Mt. Lebanon during playoff action against Woodland Hills. Despite eight tallies from Palmer, Lebo lost to the Wolverines, 47-43.

Kaleb Krebs keeps his eyes focused on the hoop despite the distracting defensive tactics by Gateway’s John Paul Kromka. Krebs played a key role in Chartiers Valley’s overtime win against the Gators.

Michael Palmer drives to the basket for Mt. Lebanon during playoff action against Woodland Hills. Despite eight tallies from Palmer, Lebo lost to the Wolverines, 47-43.

Despite a lackluster performance, Chartiers Valley edged Gateway, 46-43, in overtime and advanced to the semifinals in the WPIAL Class 5-A boys’ basketball tournament.

With the win, the Colts advanced to play section rival, Moon, for the right to play in the championship game set for 9 p.m. March 3 at the Petersen Event Center. (CV played Moon on Feb. 28, too late for the results to make The Almanac edition.)

Ross Wilkerson buried a 3-point field goal to lift CV into a lead, 44-41, it would not relinquish in the overtime. Caleb Zajicek and Nick Jessoloski converted free throws to seal the victory in the final 15 seconds of action.

Wilkerson led the Colts with 18 points. Zajicek finished with nine and Kaleb Krebs came off the bench to supply six timely points.

Courtney Jackson led the Gators, exploding for 19 points, 10 in the first half as CV slipped behind, 19-6. John Paul Kromka added 11 for Gateway.

“It was one of the ugliest playoff game,” said CV skipper Tim McConnell. “Some of my guys seemed to be sleep-walking out there. I didn’t see a spark. I didn’t see excitement.

“We didn’t shoot free throws well. We didn’t play hard. We were fortunate to put the game away. We can’t continue to play like that and get away with it.”

There was a bright lining to the victory. The win qualified the Colts for the PIAA state tournament, which begins after the WPIAL tournament concludes.

The Big Macs converted 12, 3-point field goals against the Rams but that was not enough to hold the No. 1 seed at bay. Phil Jurkovec led Pine, connecting on 10 of his 13 attempts from the field and finishing with 23 points. The Notre Dame football recruit also pulled down seven rebounds and dished up six assists. Andrew Petcash followed Jurkovec with 22 tallies.

For the Big Macs, Britton Beachy and Carson Miller supplied 22 and 21 markers respectively while R.J. Bell followed with 13 points.

Mt. Lebanon and Upper St. Clair dropped out of the Class-A playoffs, falling the first round of competition.

While the Panthers succumbed to North Hills, 65-60, the Blue Devils lost to Woodland Hills, 47-43.

For the Panthers, Darius Radfar and Kyle Meinert fired in 15 and 11 markers. For the Blue Devils, Antonio Garofoli (14) and Mark Lamendola (12) finished in double digits. Garofoli buried four, 3-point field goals, including one that tied the contest at 37 with 5:05 to play.

After beating Freeport, 63-60, in the opener of the WPIAL Class 4-A boys’ tournament, South Fayette lost to No. 2 seed, Quaker Valley, 56-44, in the quarterfinals.

Though the Lions held a 35-32 edge after three quarters, they were outscored, 22-1, by the Quakers to start the final eight minutes of play.

“The effort we gave was amazing,” said SF skipper Dave Mislan. “We controlled the tempo and really grinded for three quarters. I think they came out in the fourth and were just determined to get to the basket and they took the game over.”

Plack and Meindl finished in double digits for the Lions, scoring 13 and 10 tallies.

After beating Leechburg, 60-52, in its opener, Chartiers-Houston lost to Our Lady of the Sacred Heart, 71-39. In defeat, Cam Hanley and A.J. Myers supplied 16 and 14 points respectively. In the win, Hanley and Myers contributed 22 and 14 markers while Spencer Turling supplied 10 tallies.

In the triumph, Mitchell King exploded for 26 points. Walter Bonds (18), Eugene Goodwine (15) and Kellan Gustine (12) all followed in double figures.