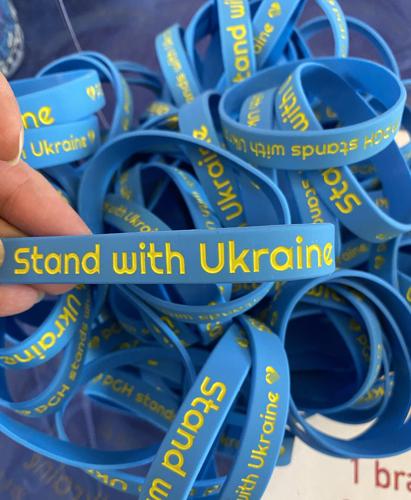 Stand With Ukraine wristbands are being sold at Upper St. Clair High School. 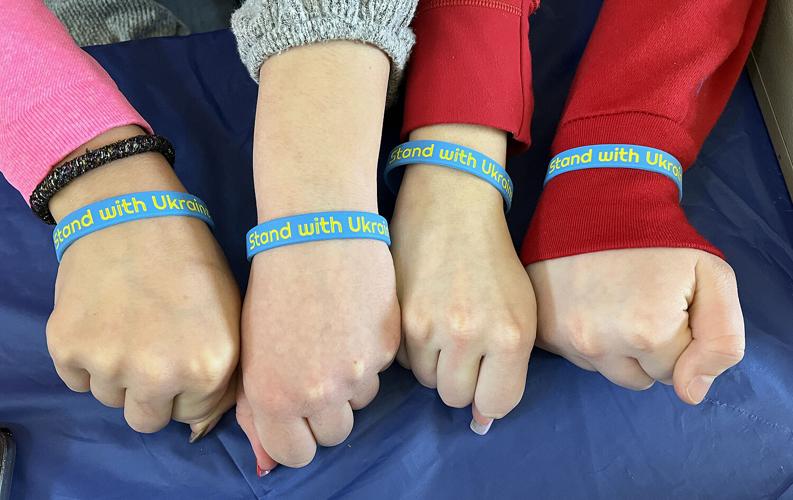 Stand With Ukraine wristbands are being sold at Upper St. Clair High School.

They are selling blue and yellow bracelets for $3 each or two for $5.

For Vilensky and Semenov, the cause is personal.

Vilensky is half Russian and half Ukrainian. Her cousin and aunt were shot and killed on the border of Ukraine while trying to escape.

Vilensky added she is aware of many children who have lost their parents in the same manner. They are now in Ukrainian orphanages.

“It’s bad enough having to mourn someone so close to you, but it’s infinitely worse when on top of that, you have to worry that you’re alone in a warring country,” she added.

Meanwhile, both of Semenov’s parents’ families immigrated to the United States from the former Soviet Union.

“Having a personal connection with this war, it has been hard for my family to watch and listen to the news,” Victoria said. “Seeing all of the senseless devastation in Ukraine, I felt I really needed to do something.”

The response from classmates has been overwhelming.

“While some have a personal connection, others just wanted to help in any way they could,” McNally said. “We noticed how eager students were to donate. Selling bracelets gives everyone an opportunity to help out.”

Bracelets are being sold during lunch periods at the high school. Since April 4, nearly $1,000 has been raised. The bracelet sale will resume following spring recess.

Additionally, the students are exploring opportunities to sell the wristbands within the community.

All of the money is being donated to a local church to cover the cost of shipping donated items to Ukraine.

“People have been really great about donating items to various churches and such. The problem, however, lies in actually getting those items to Ukraine,” Vilensky said. “The money will go to funding transportation of essential needs, such as diapers, clothing, medicines, etc., to Ukrainian orphanages.”

For the students, raising awareness and showing support for the people of Ukraine were as important as collecting donations.

“We came up with the idea to specifically make bracelets because we thought that they would be the most effective way to not only to fundraise, but also to raise awareness,” McNally said. “We knew bracelets would be the best option because more people will be willing to give when they see a bracelet.”

The students are hoping the bracelets will serve as a reminder that others in the world are suffering and that students in Upper St. Clair can make a difference in the world.

“Living in a suburban community in Pennsylvania, we tend to have more comfortable lives and aren’t always aware of the dangers that other people need to face,” Vilensky said.

“This fundraiser not only is going to allow us to play a part in solving a worldwide crisis, it’ll also expose us a bit to the issues outside of Upper St. Clair, thus expanding our perspective and teaching us how to take initiative in difficult times.”