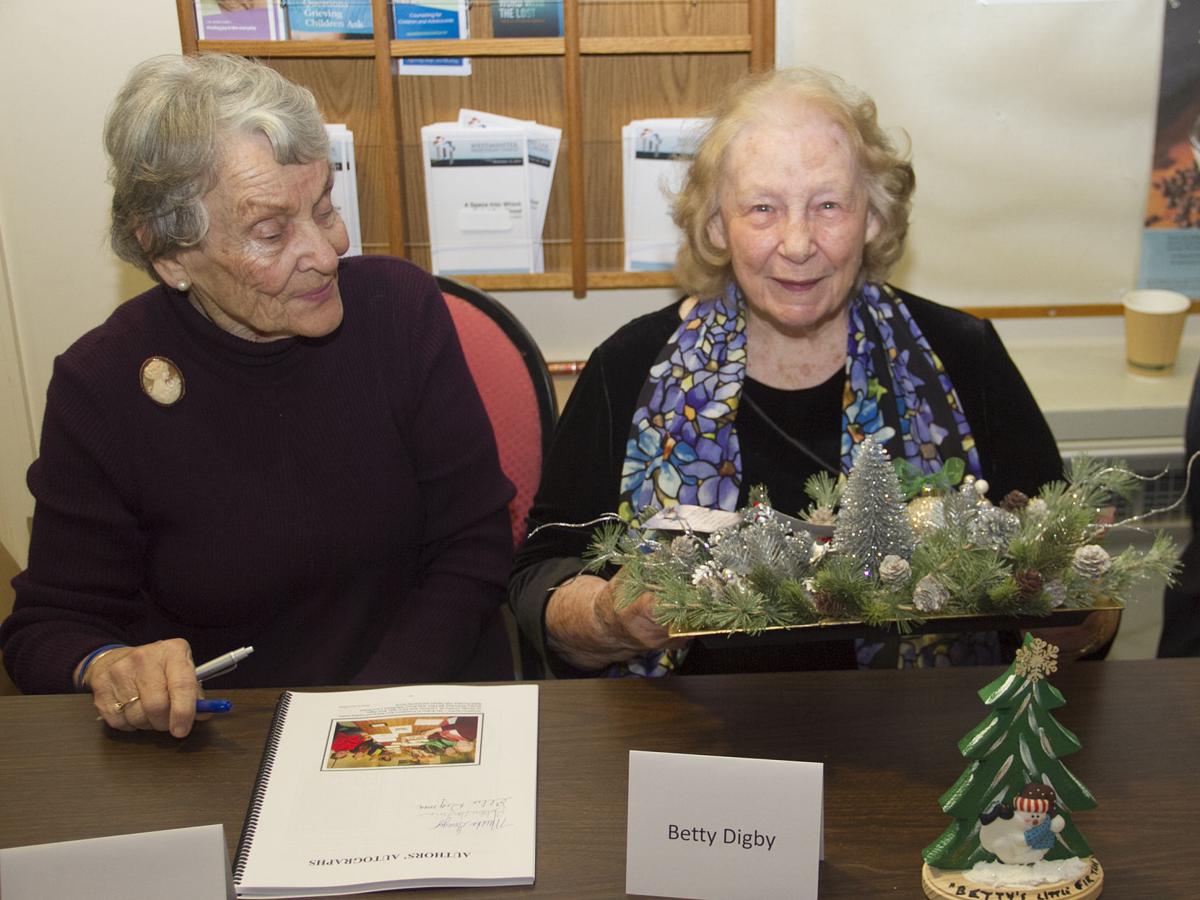 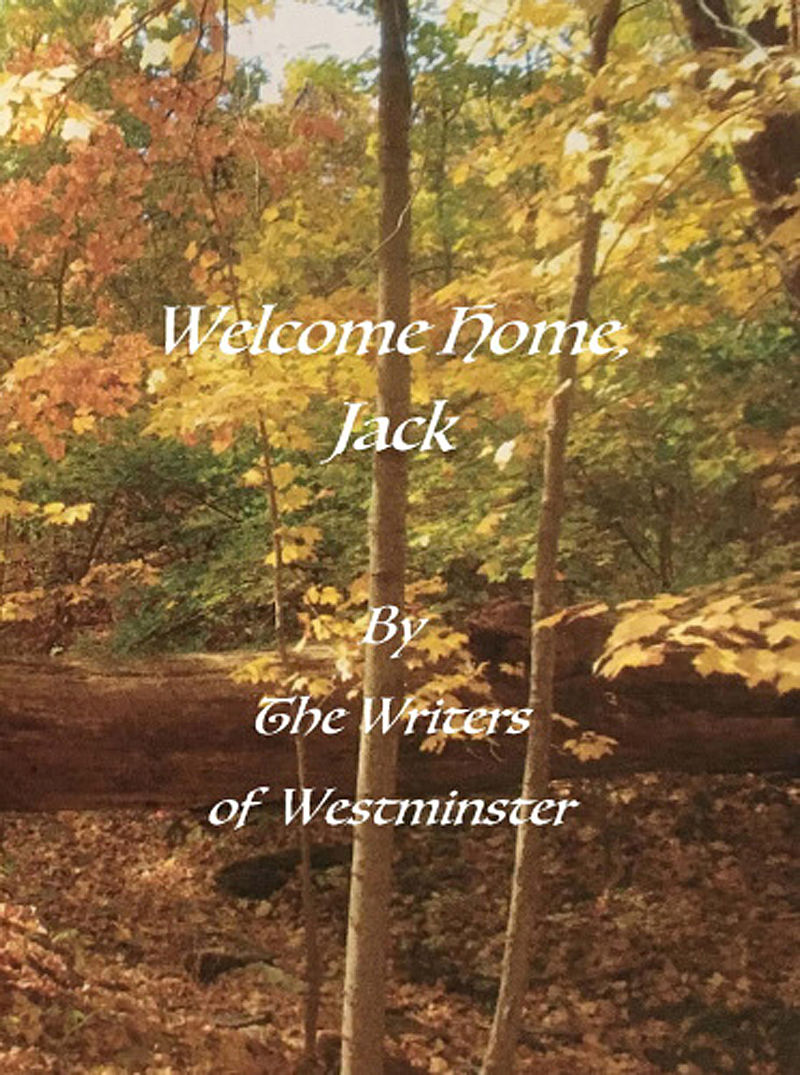 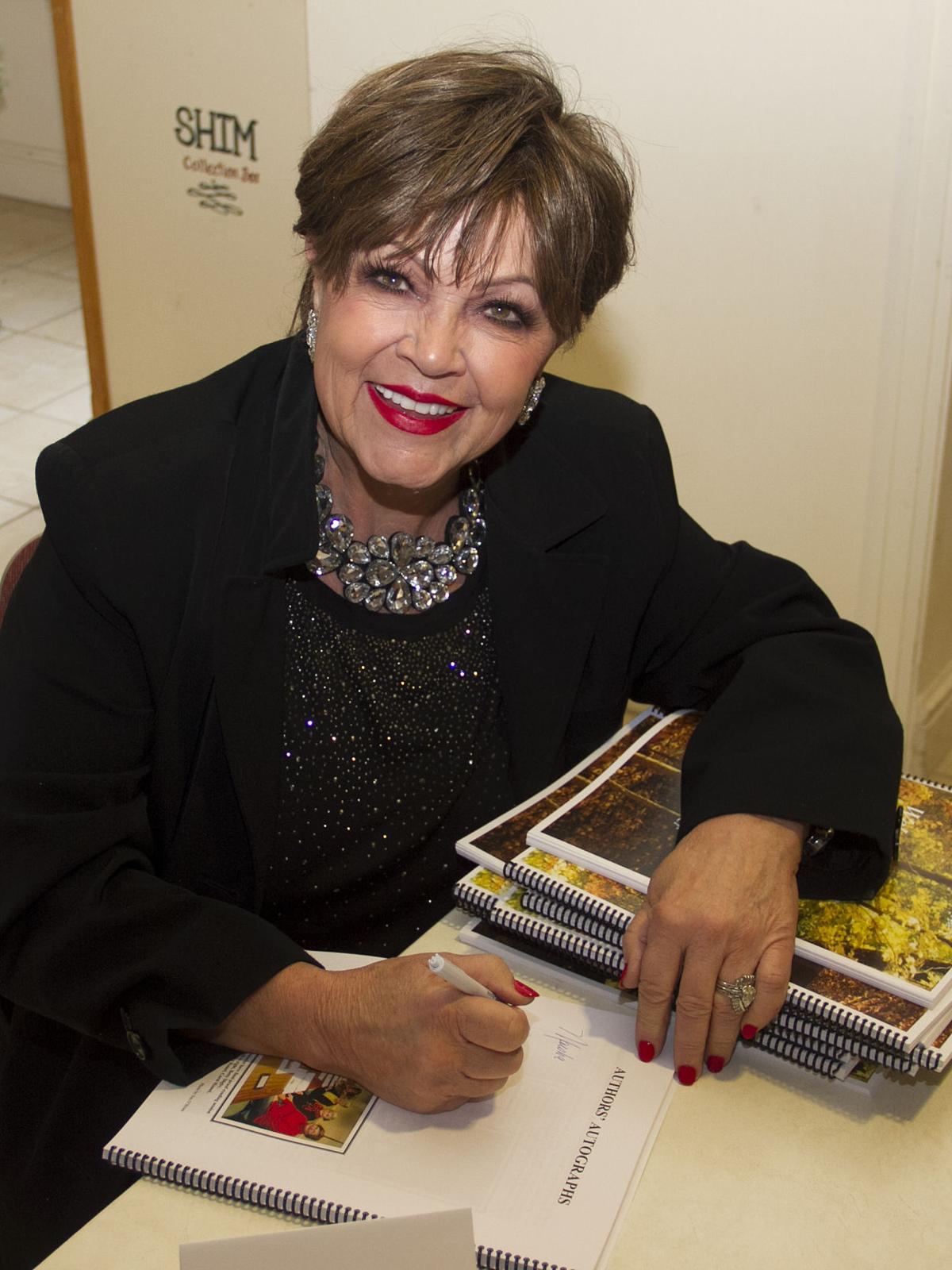 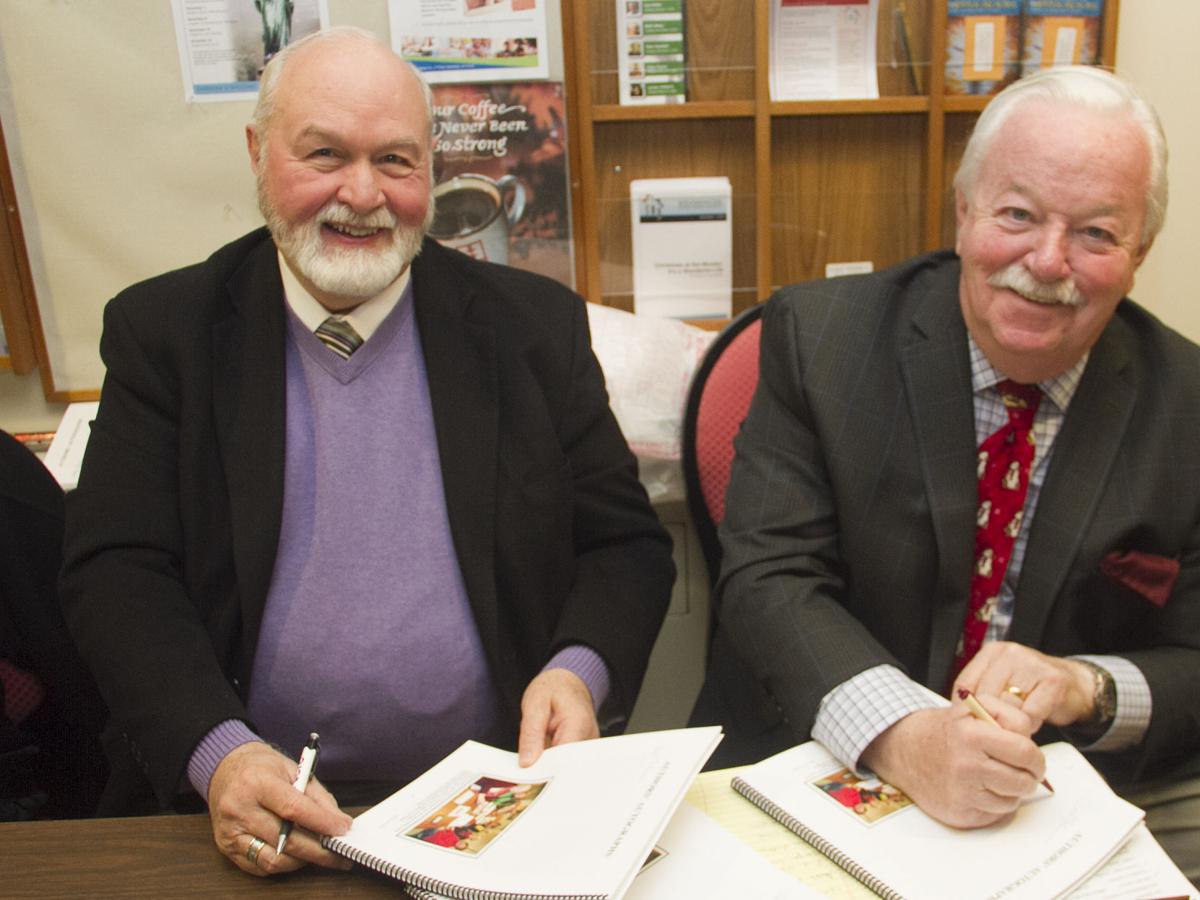 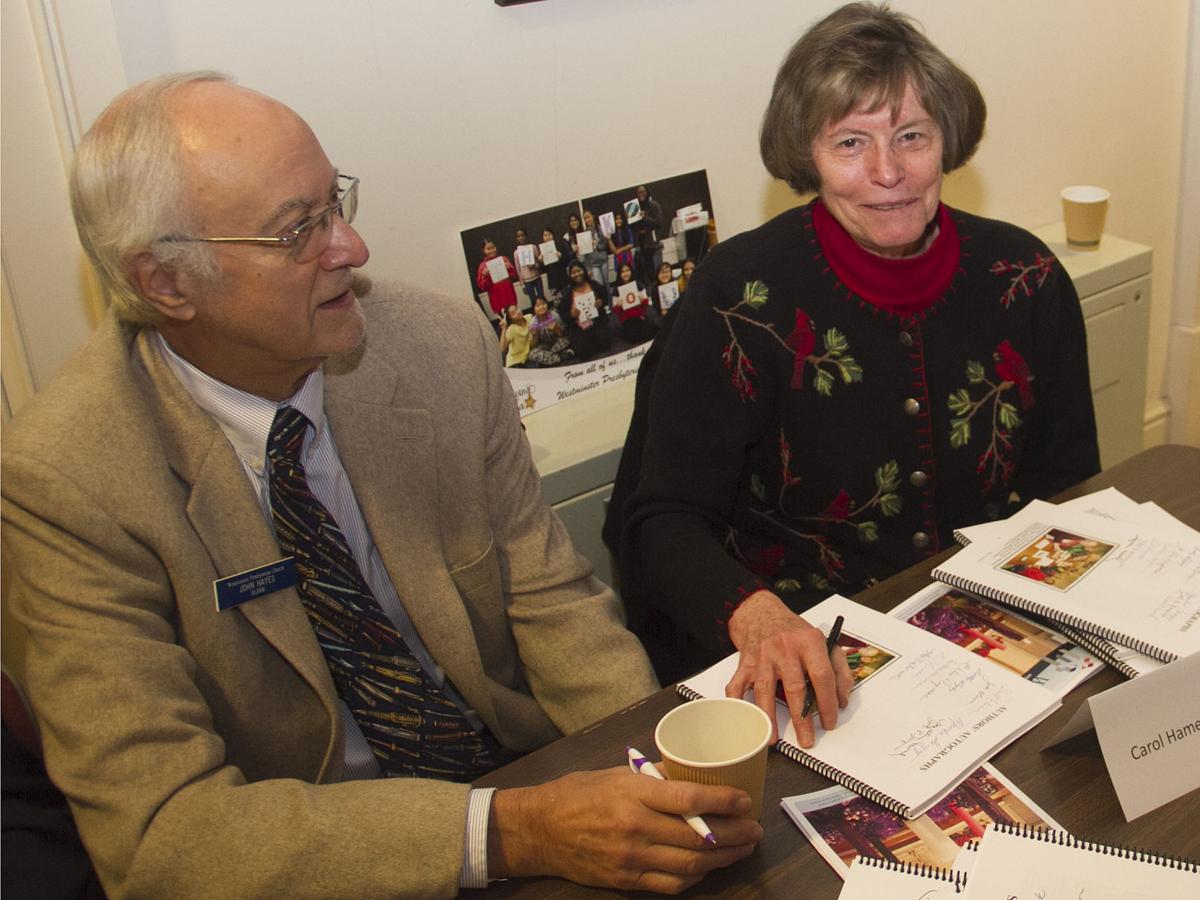 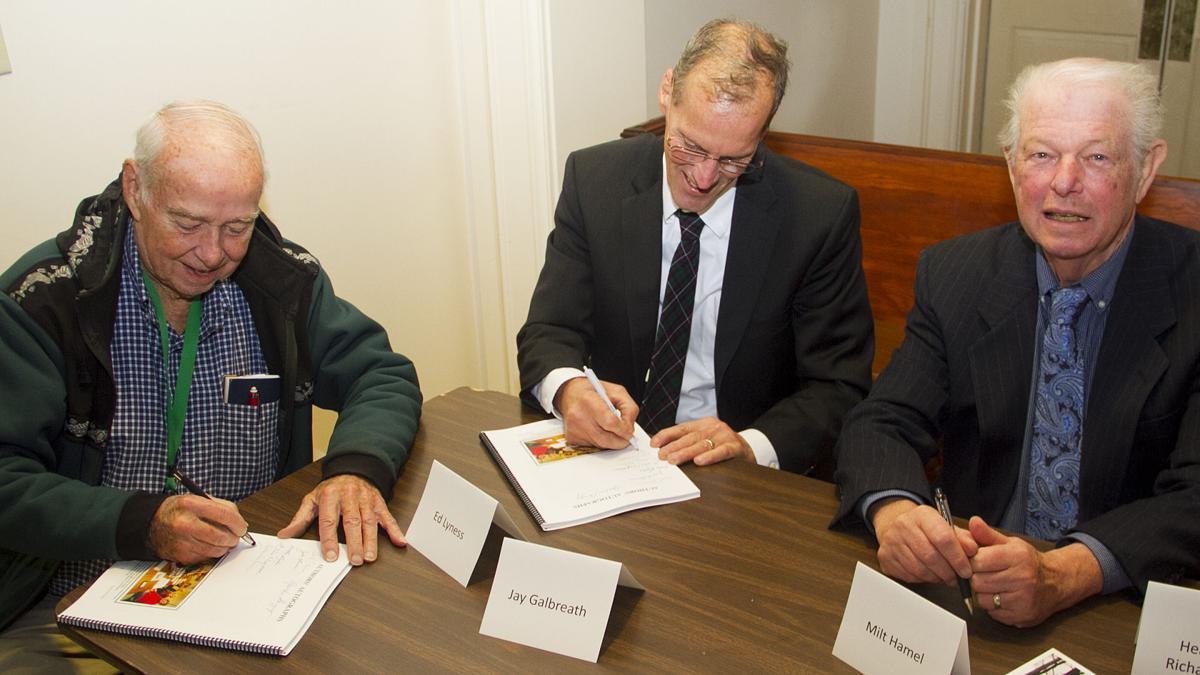 From left are Ed Lyness, Jay Galbreath and Milt Hamel. 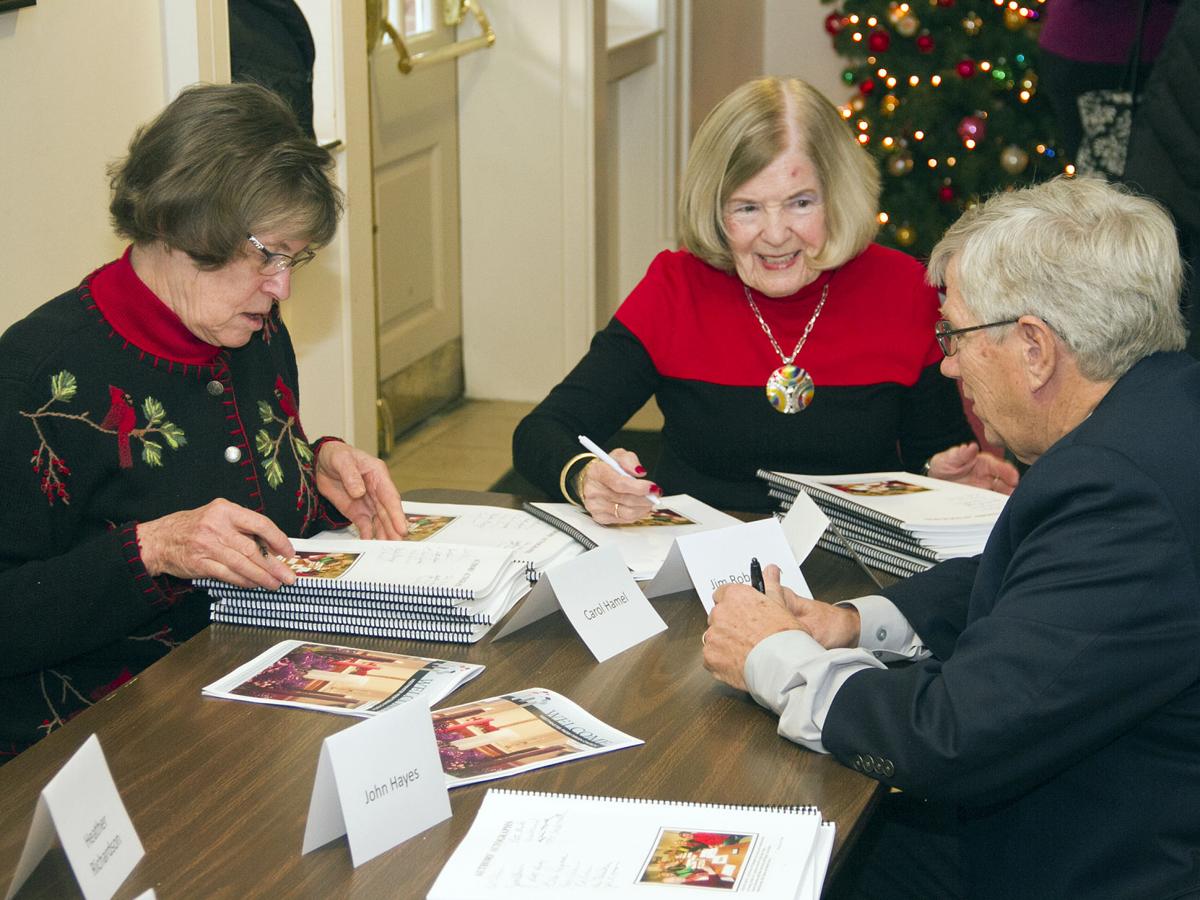 From left are Carol Hamel, Ruth Black and Jim Robertson.

From left are Ed Lyness, Jay Galbreath and Milt Hamel.

From left are Carol Hamel, Ruth Black and Jim Robertson.

When it comes to starting something productive at a relatively advanced age, painter Anna Moses continues to serve as a prime example.

Born before the Civil War, “Grandma” Moses was 78 when she kicked into full gear in the late 1930s. Betty, who is 95, took a major creative step within the past two years by joining the Writers of Westminster group, led by author Jim O’Brien.

“He brings out the best,” she said about her mentor. “He tells us to dig down to the bones and tell it like it is, and that’s the secret of writing, I think.”

Betty’s memoir “When the Lights Go Out,” which addresses losses in her family and how the Westminster Presbyterian Church congregation has welcomed her, is part of the third collection of stories, poems and photographs by members of the writers’ group.

Contributors to “Welcome Home, Jack,” titled after a line in a poem by group member John Hayes, gathered Dec. 8 at the church to sign copies of the nearly 100-page collection.

“It amazes me that these people have turned out the stories they have done, and none of them were ever identified in school as a writer,” O’Brien, who has led the group for five years, observed.

Marsha Gnagey, for example, said she hadn’t really done much writing prior to joining.

“It’s been an absolutely amazing experience,” she attested, giving kudos to O’Brien. “He has taught us to have confidence in our writing. He’s very encouraging, and he also allows us to write as we want to. He corrects us in some forms, but he allows us to be truly ourselves.”

In the preface to “Welcome Home, Jack,” O’Brien writes about how he assumed the role of mentor.”

“The Rev. Jim Gilchrist, the pastor of the church, was going over some plans with the congregation. He said he needed a writer for what he had in mind. I ducked my head in a mock gesture, as if to hide. Jim’s eyes found me.

“He wanted someone to interview church members and to write their personal stories. I didn’t want to do that. I am a teacher at heart. I told Jim there was a story in the Bible that if you serve a man a fish, he will eat today, but if you teach a man how to fish, he will eat forever.”

The Writers of Westminster’s latest collection features the work of 21 contributing writers, with O’Brien serving as editor and photographer, and Jim Robertson formatting and providing graphics for the book. Nature-oriented photos by Ellie Pigman grace the front and back covers.

A featured piece is Jay Galbreath’s “A Letter to My Dad, Dr. John Galbreath.” The Rev. Galbreath (1920-2006), the church’s founding pastor, was a Marine Corps chaplain in World War II who served, among other places, at the battle of Iwo Jima.

O’Brien had asked Galbreath to write about his father on a couple of occasions, finally suggesting he do it in the form of a correspondence:

“Tell him what’s going on at the church. We’re looking for a new pastor. The people are telling you what they look for.”

Occasionally, O’Brien advises making additions to the work of his writers, and so Galbreath’s piece wraps up with an extra sentence:

“I think they are seeking someone like you, Dad.”

O’Brien said that part of the proceeds from the book sale will go to Westminster’s endowment fund in memory of Humphreys, and a significant amount is earmarked for helping the church pay off its debt, “hoping we can inspire others to follow through and do the same.”

“I also hope that we’re also going to get some new members for our group for our coming year,” he said.

For anyone who wants to go the Betty Digby route, even if you’re not a nonagenarian, O’Brien conducts Writers of Westminster sessions the third Tuesday of each month at the church.