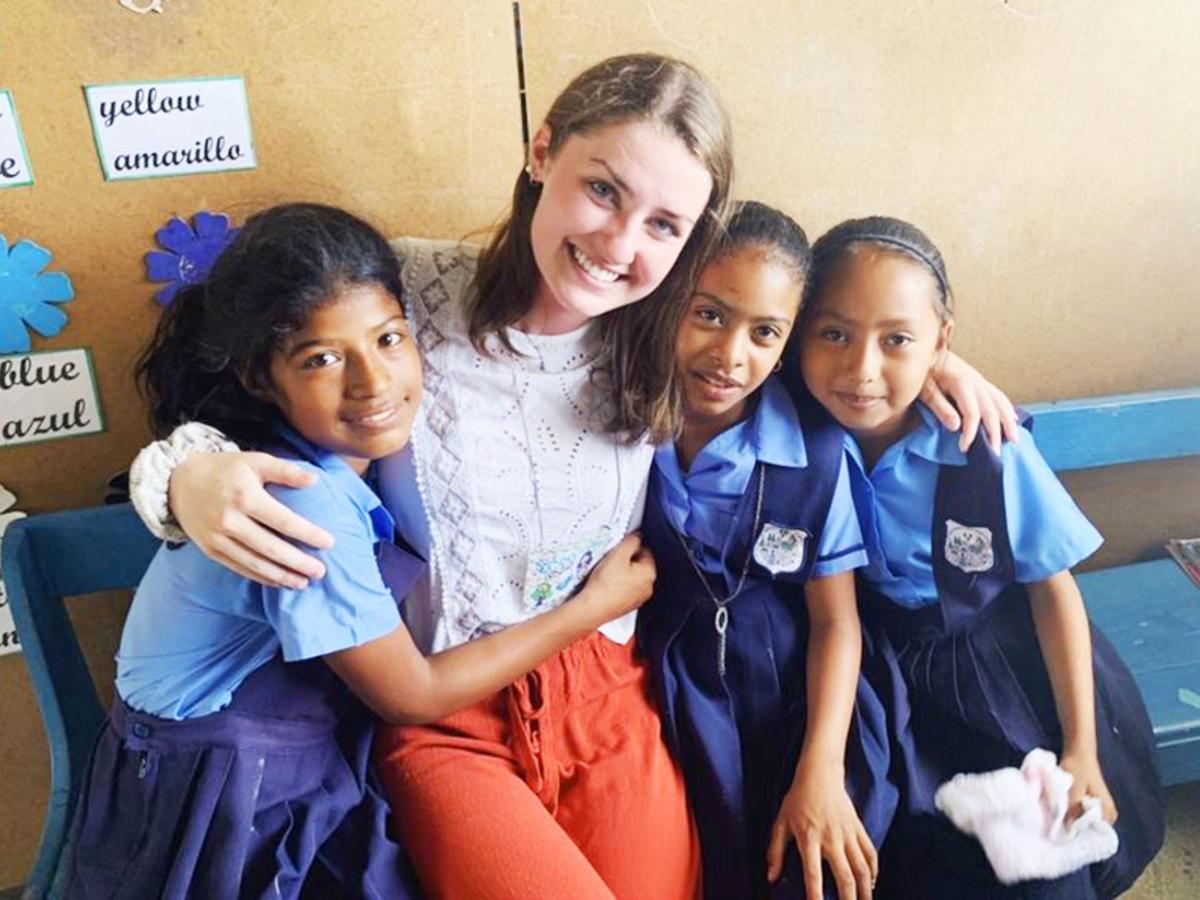 Youngsters in Belize take a liking to Elle Snyder during her mission trip to the Central American nation. 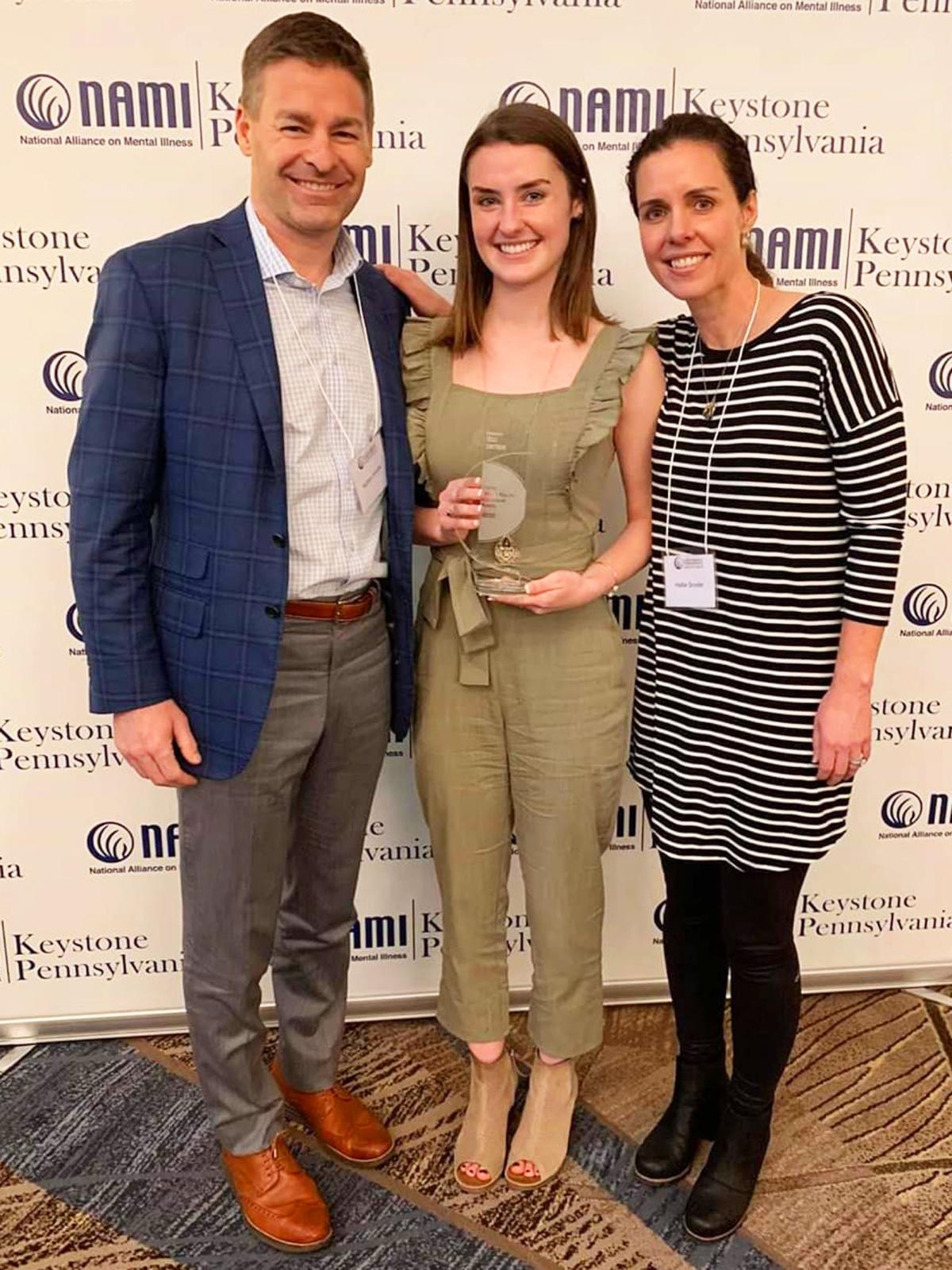 Elle Snyder with her parents, Nathan and Hallie Snyder, during the NAMI conference 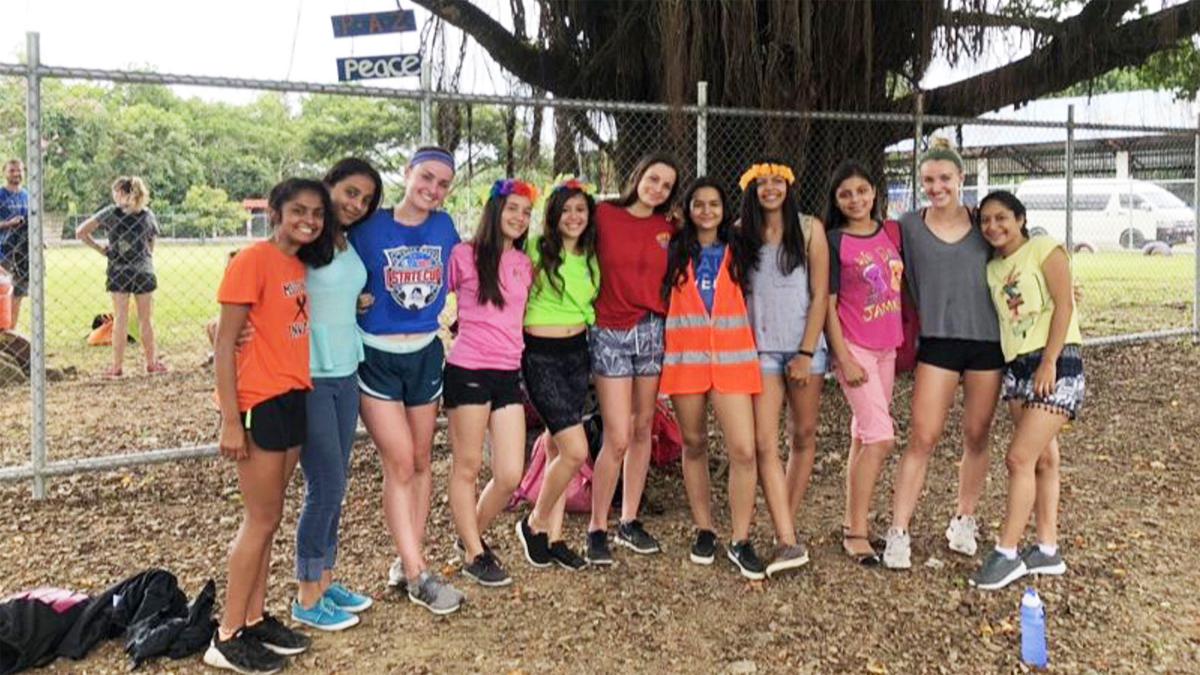 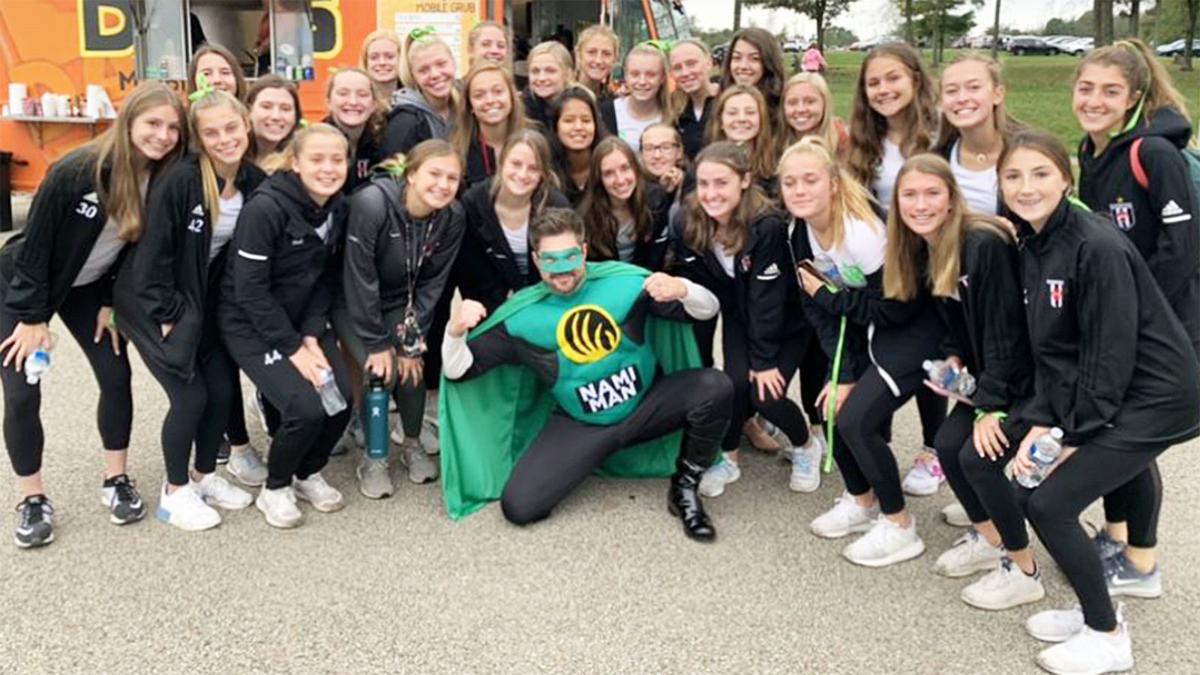 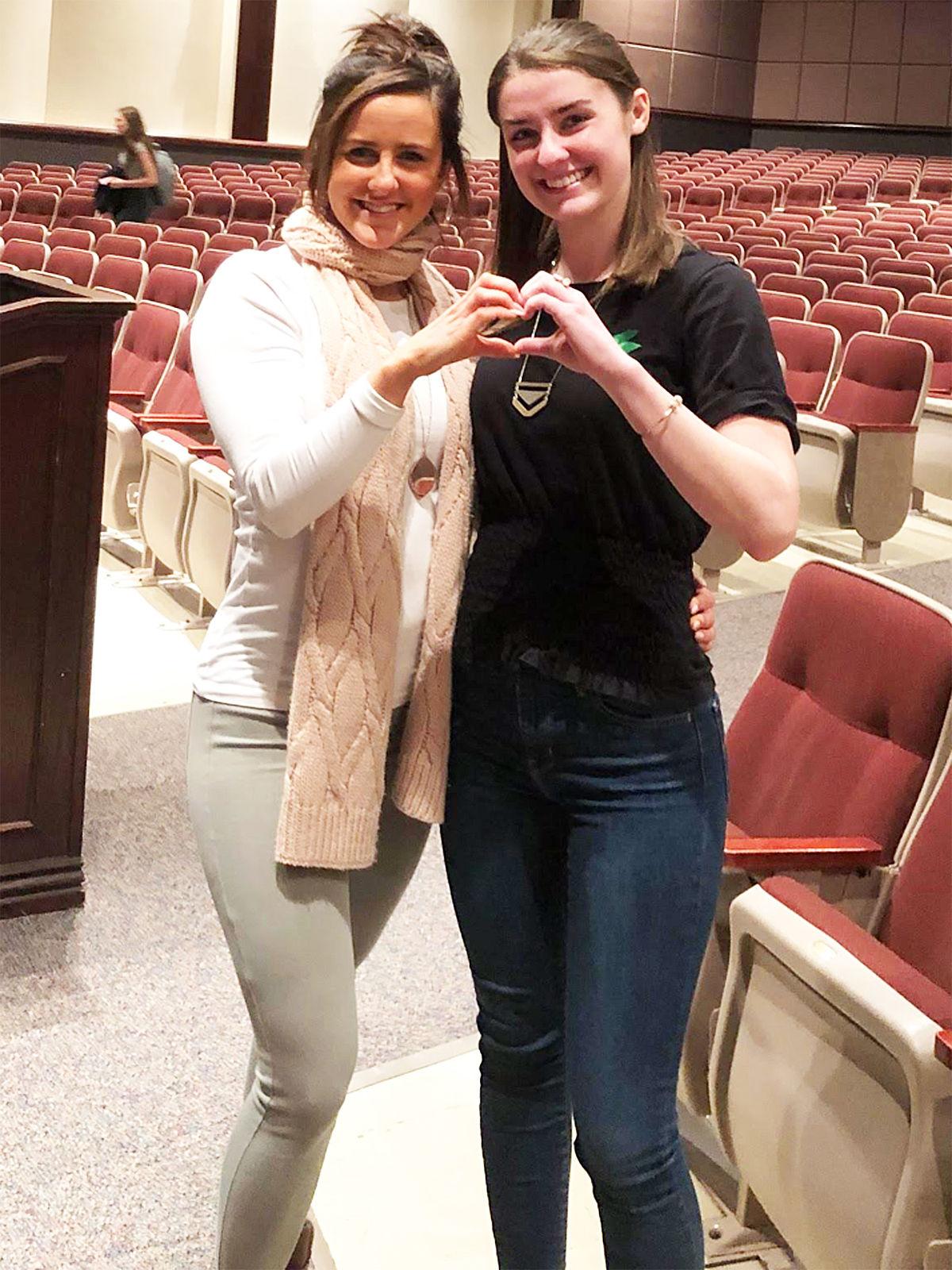 Elle Snyder, right, got the ball rolling in making arrangements to have Kate Fitzsimons speak at Upper St. Clair High School in February. 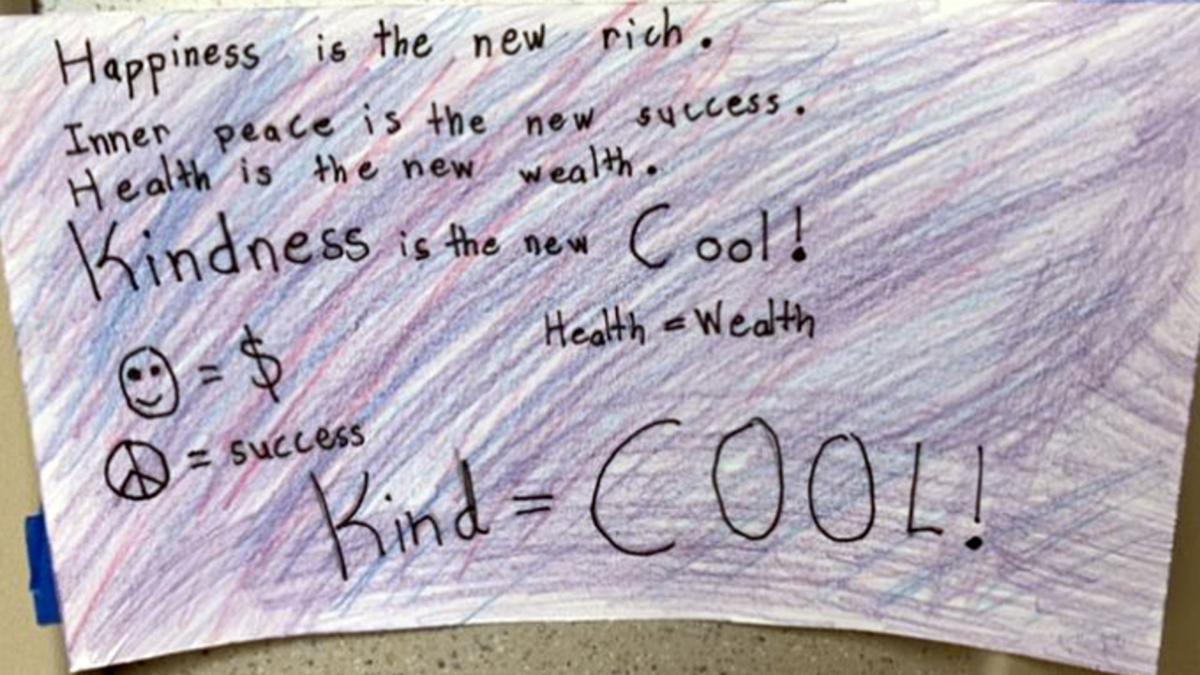 One of the notes posted at Streams Elementary School 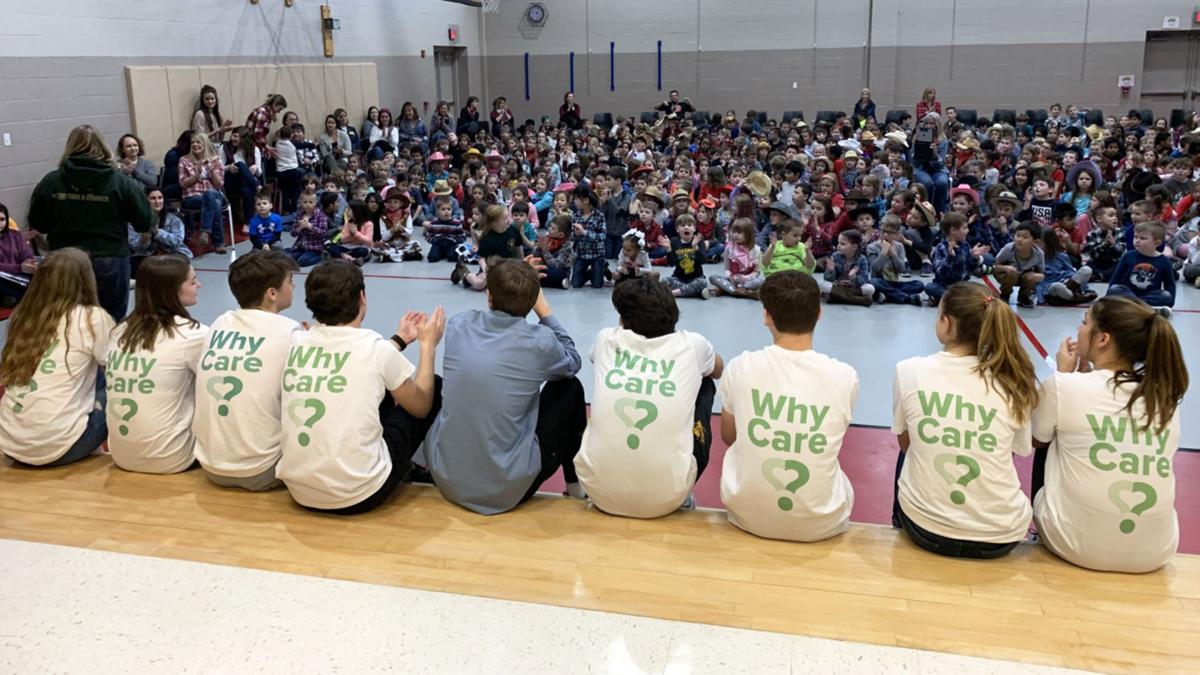 Youngsters in Belize take a liking to Elle Snyder during her mission trip to the Central American nation.

Elle Snyder with her parents, Nathan and Hallie Snyder, during the NAMI conference

Elle Snyder, right, got the ball rolling in making arrangements to have Kate Fitzsimons speak at Upper St. Clair High School in February.

One of the notes posted at Streams Elementary School

At the ripe old age of 16, Elle Snyder already was a seasoned veteran of mental health advocacy.

And so the Upper St. Clair High School junior had a particular interest in an upcoming statewide Child and Adolescent Mental Health Conference, hosted by National Alliance on Mental Illness Southwestern Pennsylvania.

“You know what, Elle?” high school assistant principal Dan Beck told her. “How cool would it be if they had a youth speaker?”

She agreed, to which he replied:

“I’m talking about you!”

On Feb. 28, she had the opportunity to present “Creating a Movement: Why Young Voices Matter” during the conference. And in recognition of the all she has accomplished so far, Elle received the first Youth Mental Health Leadership Award from NAMI Keystone Pennsylvania.

“I was definitely very nervous beforehand, but it went very smoothly,” she said. “All these adults wanted to hear what I had to say.”

Some even asked afterward about the possibility of her speaking to their organizations, and inquired what she charges. Of course, she doesn’t, as her goal is helping to spread the word.

“I feel a lot of young people don’t have any clue what the real meaning of mental health or mental illness is, and we kind of stereotype it as this negative thing, because we’re not educated enough about it,” she said. “A lot of people just think of as this uncomfortable topic and don’t even want to learn about it. But if we’re educated at a young age, it makes a big difference.”

Elle, who recently turned 17, admits to being similarly uninformed when she was assigned as a freshman to attend a meeting of the Upper St. Clair Youth Steering Committee during which a NAMI volunteer spoke, telling of his battles with depression.

“We’d heard stories about people going through similar things. So it wasn’t just his story, but the fact that he went into mental health and mental illness, and what it really was,” she said.

Her interest sufficiently piqued, she became a founding member of her school’s Student Wellness Steering Committee, a group that works to raise awareness in that regard. Then she participated in a pair of eye-opening mission trips to Central America.

“I’d seen all of these social media posts on what missions trips were supposed to be like, or what people portrayed them as,” Elle said. “You kind of expect going in that all these kids are going to be said, and you’re going to have to help them out and be this light in their lives.

“And it turned out to be the complete opposite, which totally blew my mind,” she continued.

“The ways that they communicated and socially interacted with us, it was just so different. And they were just so happy, and they appreciated absolutely everything that they had.”

The revelation, she explained, contrasted with what she’d come to know in the elevated socioeconomic climate of Upper St. Clair.

“We don’t even feel like we can be sad, sometimes,” she said. “There’s all this pressure on us. But then we always feel like mental health can’t even pertain to us, because of how we’re growing up. It’s just unfair that we could even think that way.”

In her NAMI presentation, Elle addressed the impact of a certain relatively recent phenomenon.

“Social media has definitely become a huge part of this, especially in communities like ours, where we’re expected to be something so perfect. And then we see all this stuff on social media, and we’re like, why don’t I have this? This is what I am expected to be like. Why am I not like this?” she explained. “Regardless to how confident anyone is, we’re always feeling compared to these images that people are portraying themselves as.”

Through her involvement with the Student Wellness Steering Committee and as a member of the high school girls soccer team, she has taken the lead on several organized efforts to provide enlightenment and raise funds for NAMI.

For example, soccer players held a “green-out” during one of their games in the fall, following the lead of a Conference USA college awareness initiative.

“The other team got into it, too, and we raised a ton of money in support,” Elle reported. “We had the whole stadium filled with posters, and I got to speak in front of the whole community and say a couple of words about NAMI. It ended up being a huge success.”

Also in the fall, she and some of her teammates participated in a NAMI Walk in Monroeville

“At first, I was very hesitant, because it was this very young crowd of students,” she recalled.

“Students in high school don’t even want to listen to what mental health is and what mental illness is, so how are we going to communicate it in an age-appropriate way to these kids?”

But the effort turned out to be another success.

“We found ways to do it appropriately for their age, and we gave them all these lessons surrounding empathy, and being able to care about themselves and about others,” she said.

Her mother, Hallie, joined Josh prior to the Streams program in hanging posters at the school with the theme “Why Care?” and containing information about the NAMI campaign of that name.

“Then later, at recess, these students started hanging their own little words of inspiration all around the school about why they care,” Elle said. “And this was completely on their own. None of the teachers told them to do this or anything.”

She was instrumental in bringing Australian teen resilience specialist Kate Fitzsimons to the high school in February, prior to her also speaking at the NAMI conference.

“She just made the biggest difference in our school. I know that lot of people usually at assemblies are looking down at their phones and watching Netflix under the seats,” Elle acknowledged, saying that she had some of her friends watch what others were doing during Fitzsimons’ presentations. “They were like, ‘I did not see one person on their phone. Everyone was so intrigued.’”

At the NAMI conference, Elle wrapped up her presentation by summarizing what she’s been saying all along:

“From a young age, students need to be given more opportunities and education about the topic to avoid mental health issues from ever occurring. Who better to stand by this than teens, themselves? Voices like mine need to start being heard for a difference to be made.”

For more information about the National Alliance on Mental Illness, visit www.nami.org.