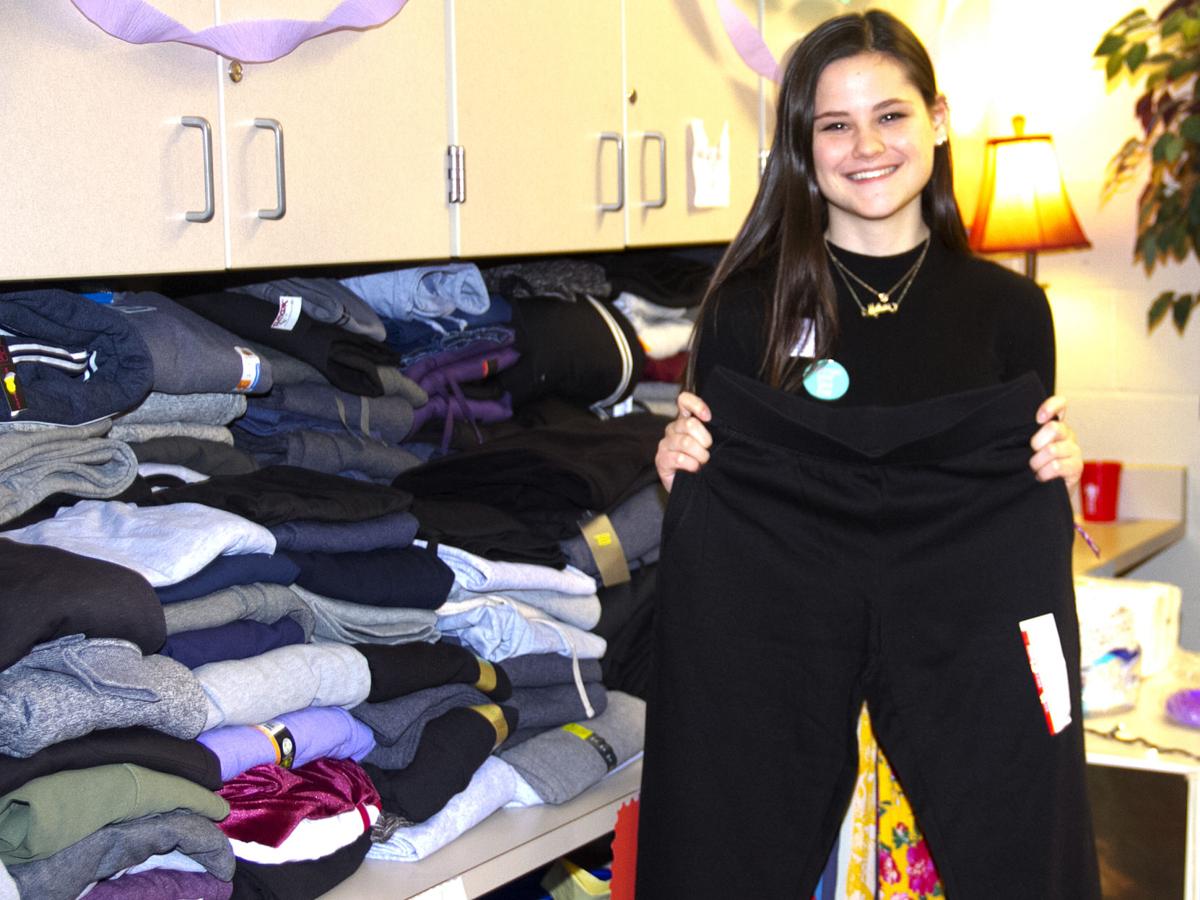 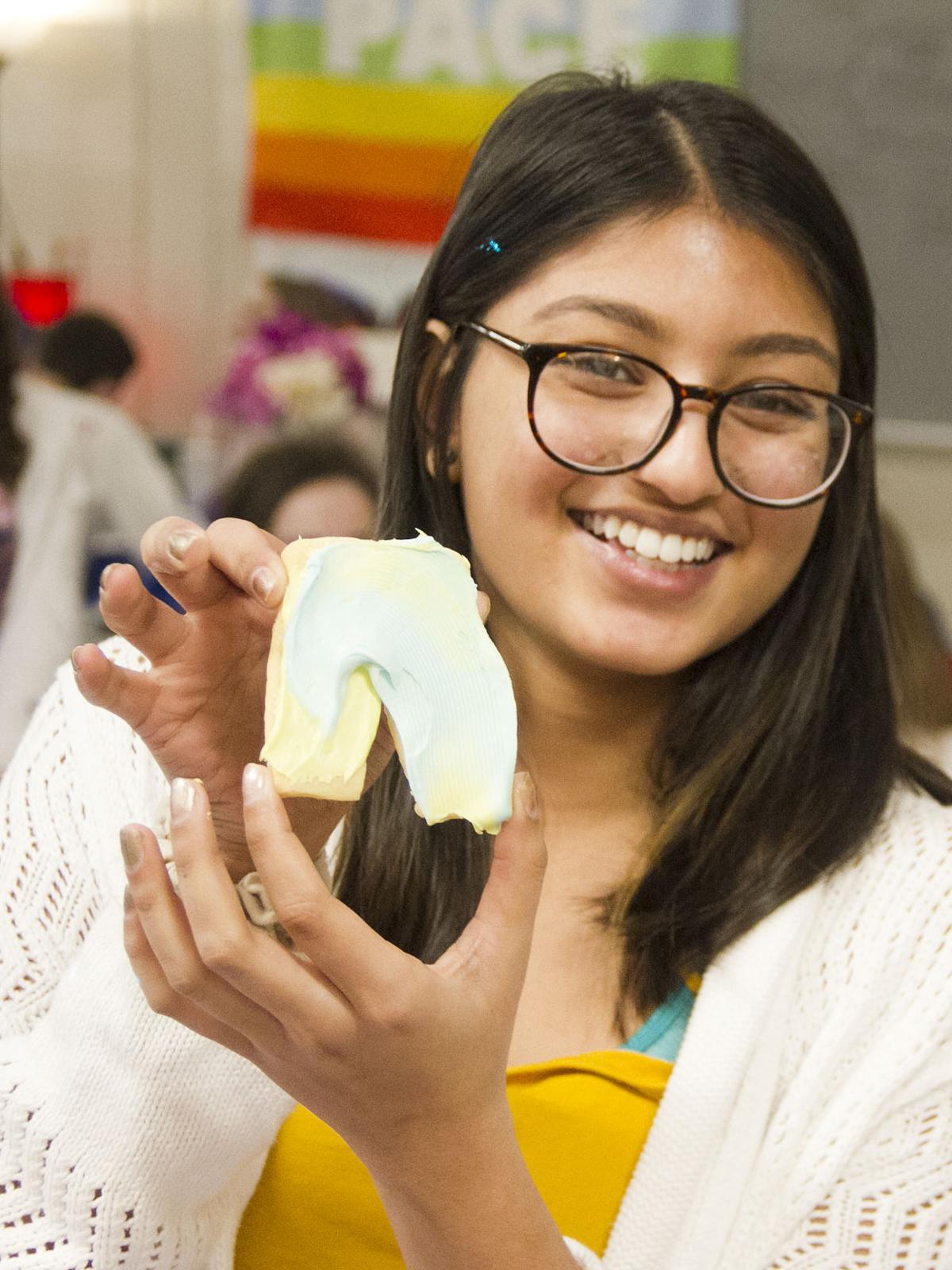 Anika Sinha shows one of the "pants" cookies made by students in her class to show appreciation for support of their sweatpants collection project. 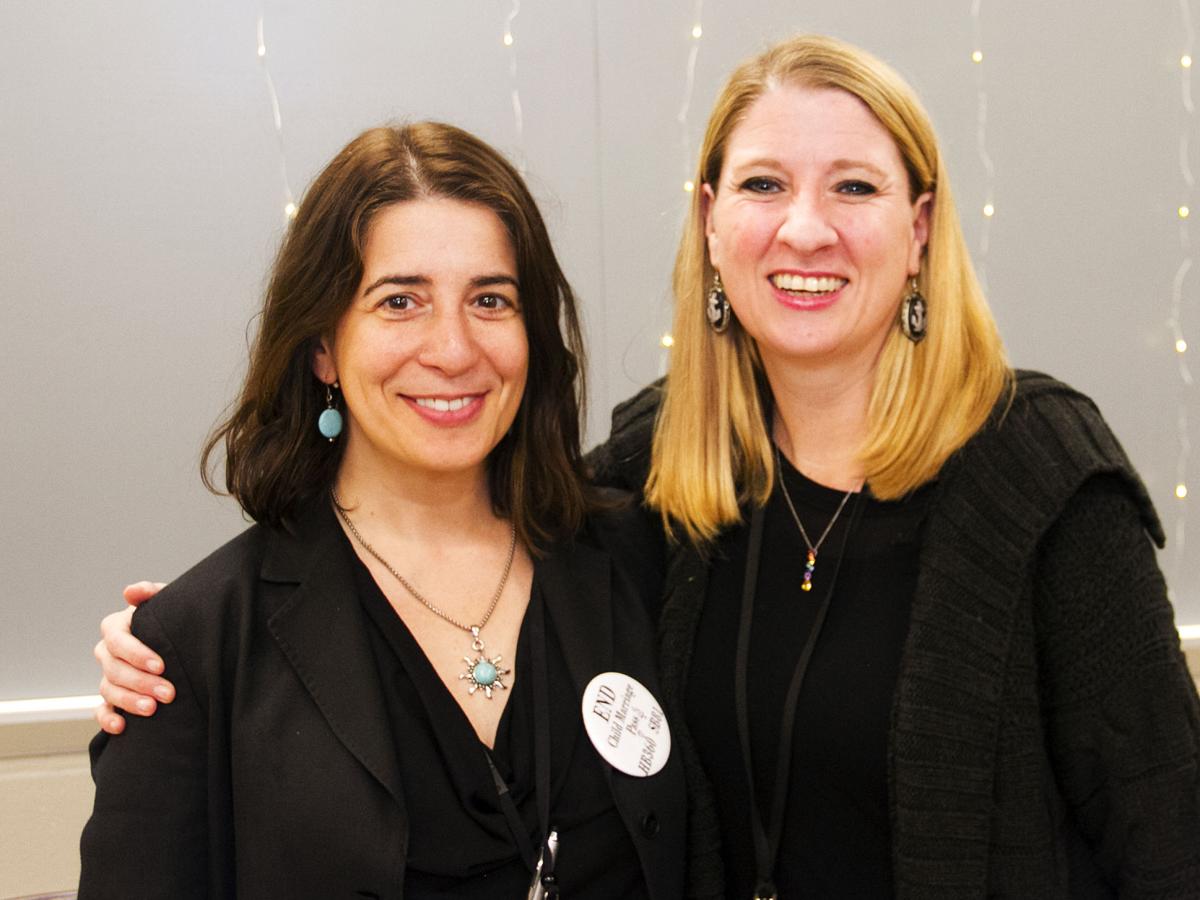 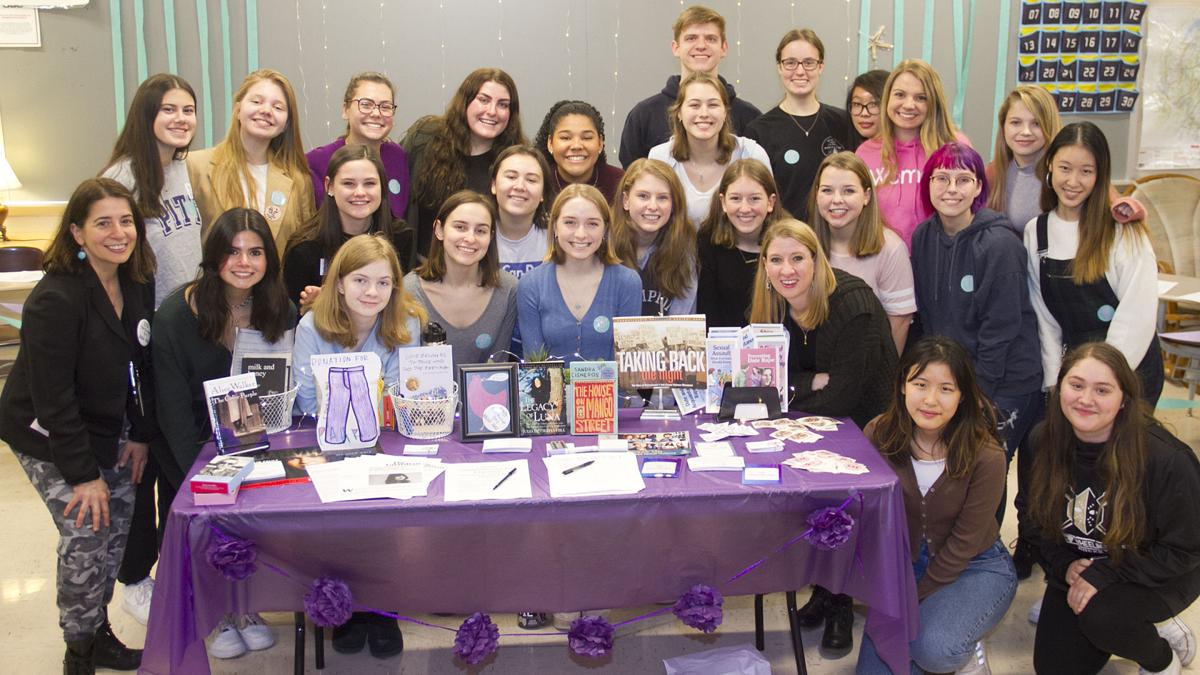 Students and faculty members attend the “pants party” held to acknowledged the support received for the sweatpants drive. 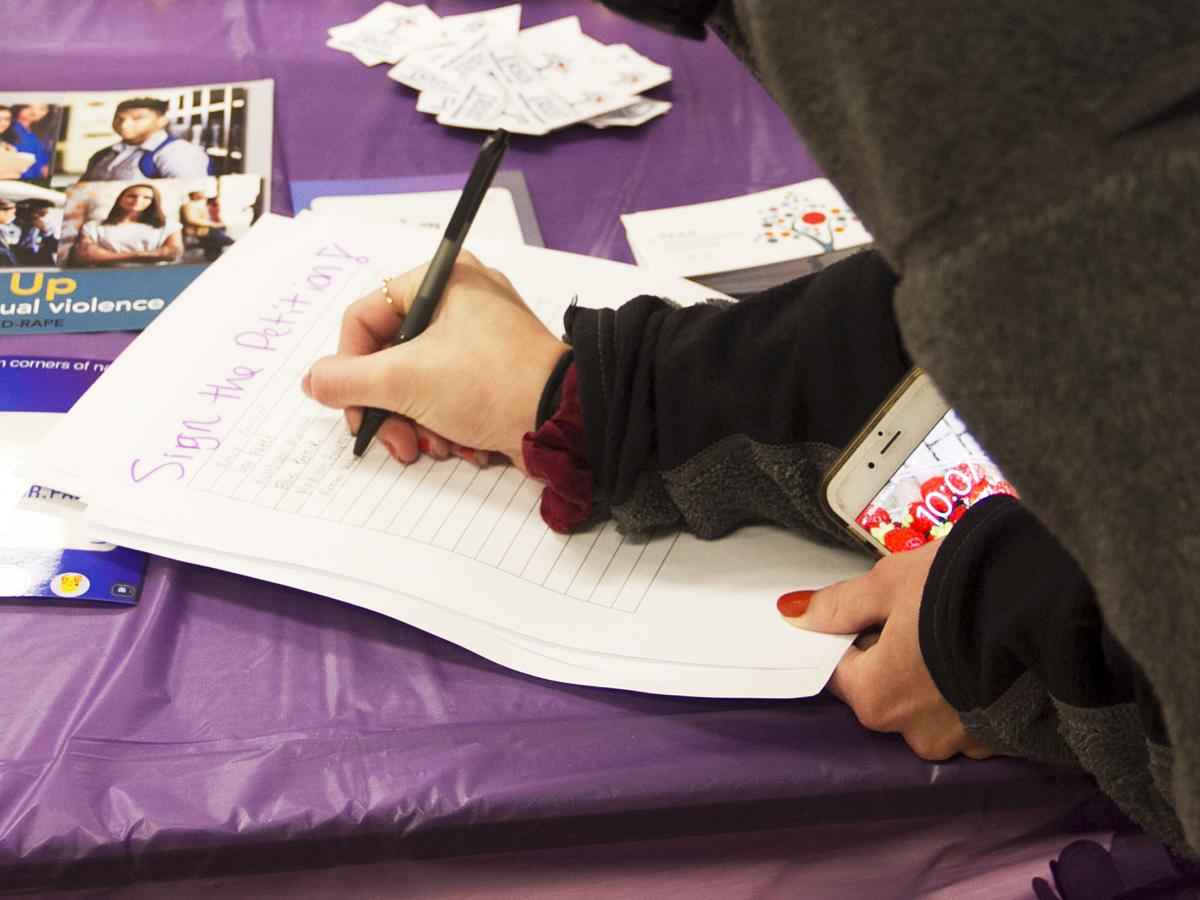 A student signs a petition for a comprehensive sex education course. 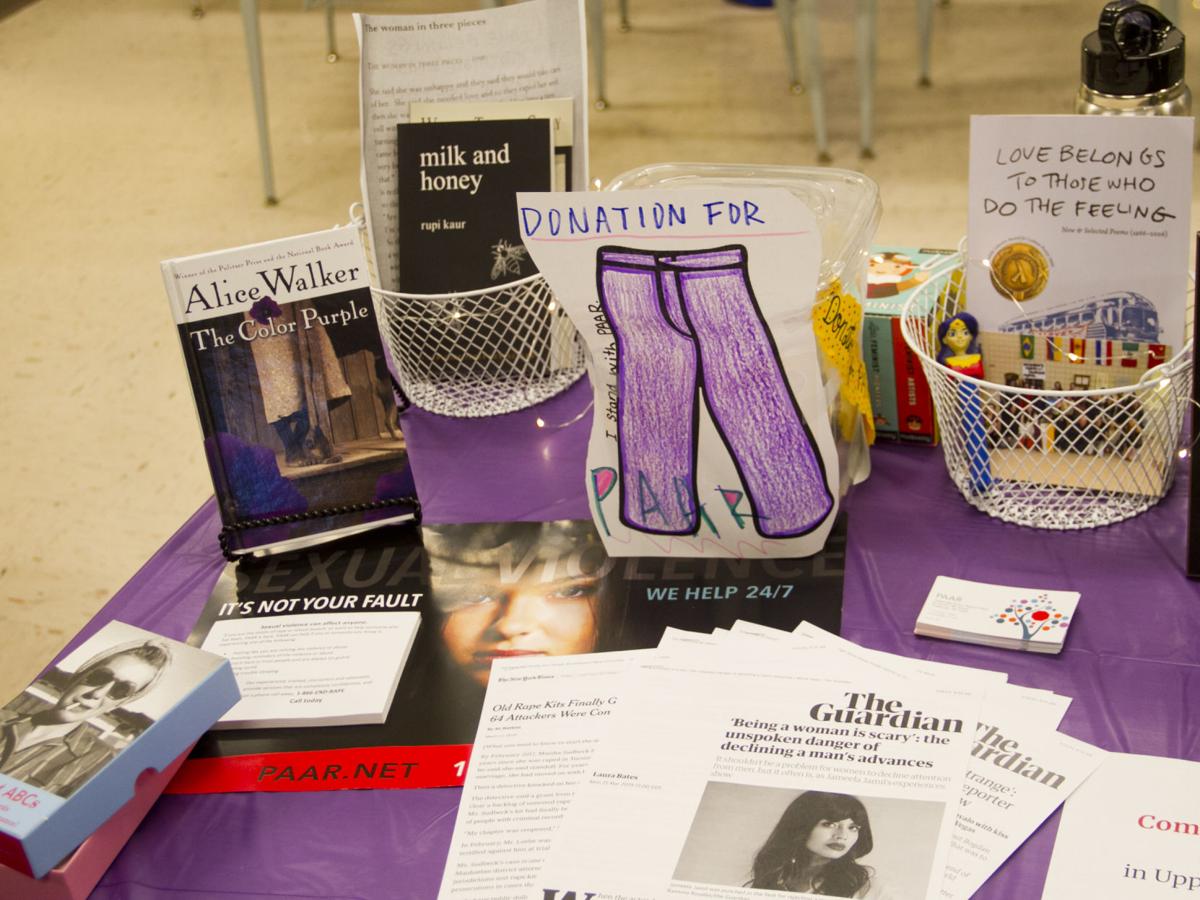 Information and resources on display

Anika Sinha shows one of the "pants" cookies made by students in her class to show appreciation for support of their sweatpants collection project.

Students and faculty members attend the “pants party” held to acknowledged the support received for the sweatpants drive.

A student signs a petition for a comprehensive sex education course.

Information and resources on display

The lengthy counter lined with layers of price tag-bearing sweatpants could have been right at home in the middle of a clothing store.

Rather than being for sale, the 300-plus garments on display represented the largesse of Upper St. Clair High school students, and their friends and family members who donated to a worthy, but relatively little-known, cause.

Explaining the perhaps surprising purpose of the pants was Sadie Restivo, director of development for Pittsburgh Action Against Rape crisis center.

“When we have an advocate in one of our victim response teams who goes out and meets somebody at the hospital, a lot of times the clothing is taken for evidence,” she said. “For years and years, they would leave in hospital scrubs. And you’re really then putting yourself out there. Not only have you had something taken away from you, now you don’t have clothing that is your own.”

And so PAAR collects easily fitting articles of new clothing that go toward helping to alleviate some of the trauma suffered by victims of sexual violence.

Along with conducting a two-week drive garnering an impressive quantity of sweatpants – “I don’t think we’ll have a need for a long time after this,” Restivo predicted – students in the high school’s Integrated Studies: Women in History and Literature course collected $1,000 in monetary donations for the 47-year-old nonprofit, which serves about 3,200 people annually.

To acknowledge the support they received, the students hosted a “pants party” Jan. 14, part of the purpose of which was to promote awareness of PAAR and, by extension, awareness of the foreboding subject it addresses.

“We want to start the conversation and make people feel comfortable talking about it, because it’s very taboo within the school,” senior Mathena Jencka said. “It’s a prevalent issue around us, and it’s unfortunate that we have to have this fundraiser, the fact that so many women, and even men, have to go to a rape crisis center.”

Placed prominently for the event was a table full of resources and materials related to the issue at hand, including various articles and books – Alice Walker’s Pulitzer Prize-winning “The Color Purple” among them – and a certain piece of paper for students to sign.

“We have a petition for a comprehensive sex education course that we’re trying to introduce within the high school,” Jencka said, “because many of the girls have talked about how they don’t really gain anything from our current health education.”

She and the other 20 or so students taking the women’s studies course, instructed by English teacher Daniela Buccilli and social studies teacher Leah Humes, are learning a lot about taking such initiatives.

“The girls are really, really hungry for knowledge on how to change things. It kind of comes organically from literature and history and civics,” she said about the integration component of the class. “There’s something about that mix that lends itself to these kinds of projects.”

The teachers regularly invite speakers to enlighten the students, and a recent guest was Gail Brown, manager of prevention services at PAAR.

“She was really impressive, and I think we all left with this deep sense of gratitude that Pittsburgh has the center that it does,” Humes said. “We wanted to support them and let people know there is a group like that out there, because we didn’t know.”

Jencka said many of the speakers have shared an unfortunately common theme.

“The topic that came up almost every seminar was the prevalence of rape in our society and how it’s not really talked about. It’s sad to say, but most of the girls in our class have a fear of rape,” she said. “There are girls who carry around pepper spray when walking to their cars at night, because it’s just that fear that it could happen.”

While it does make for difficult conversations, confronting the realities has led to greater awareness and, in turn, more efforts to provide assistance.

“Probably the last three years, sexual violence has been in the news much more prevalently, and we have seen such an uptick in different organizations doing what we would call third-party fundraising,” Restivo said, with the Upper St. Clair students’ project a prime example.

“They’re leading the charge,” Hart said. “It makes you feel confident about the future.”