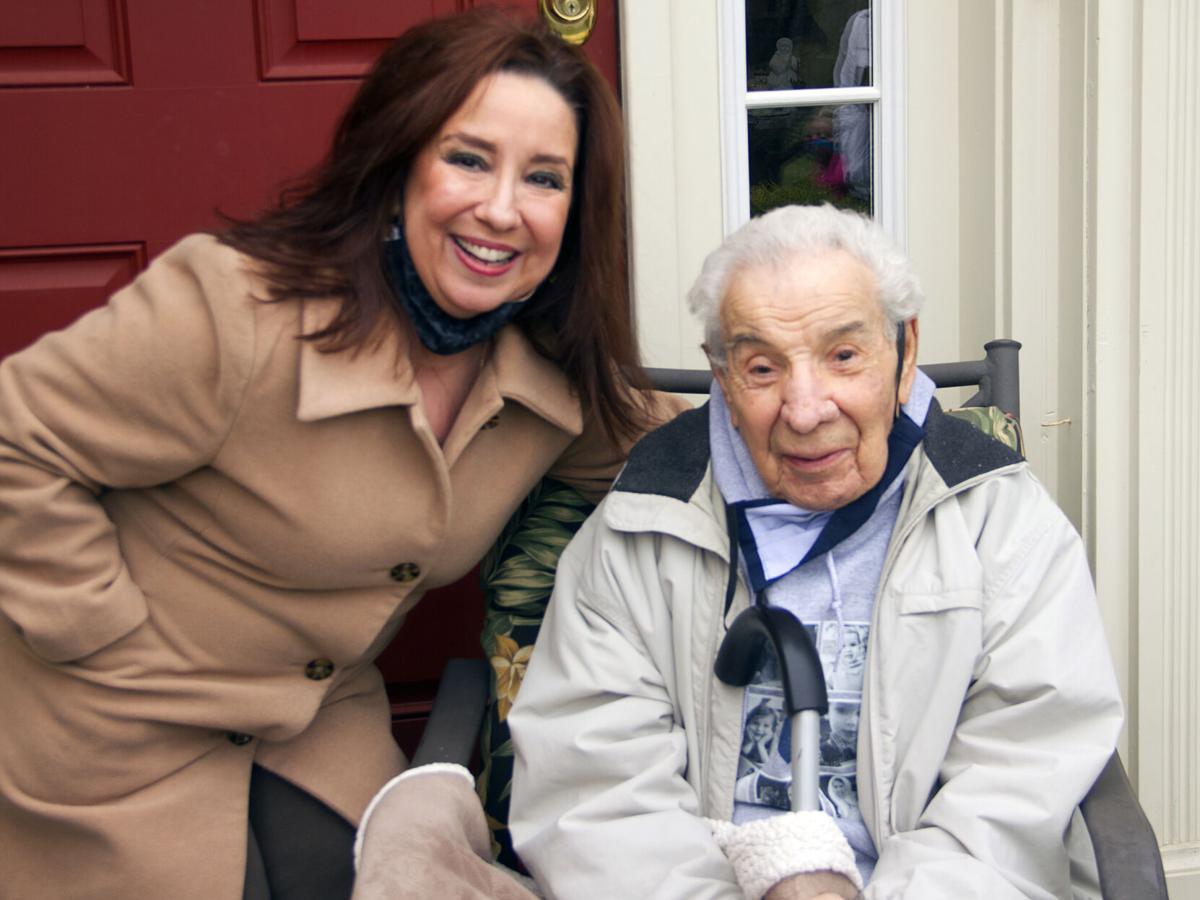 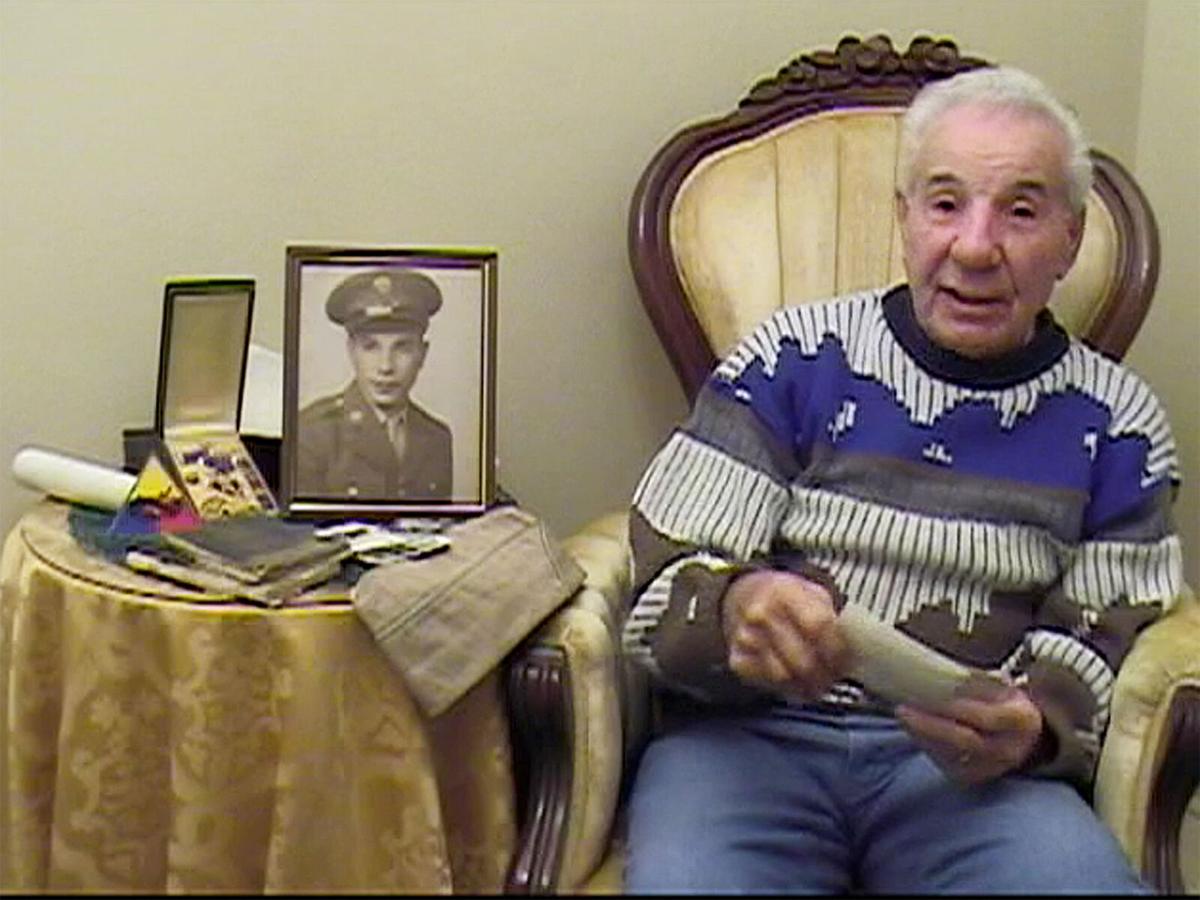 Alfred Luconti shares memories in a video made for the Library of Congress American Folklife Center's Veterans History Project. 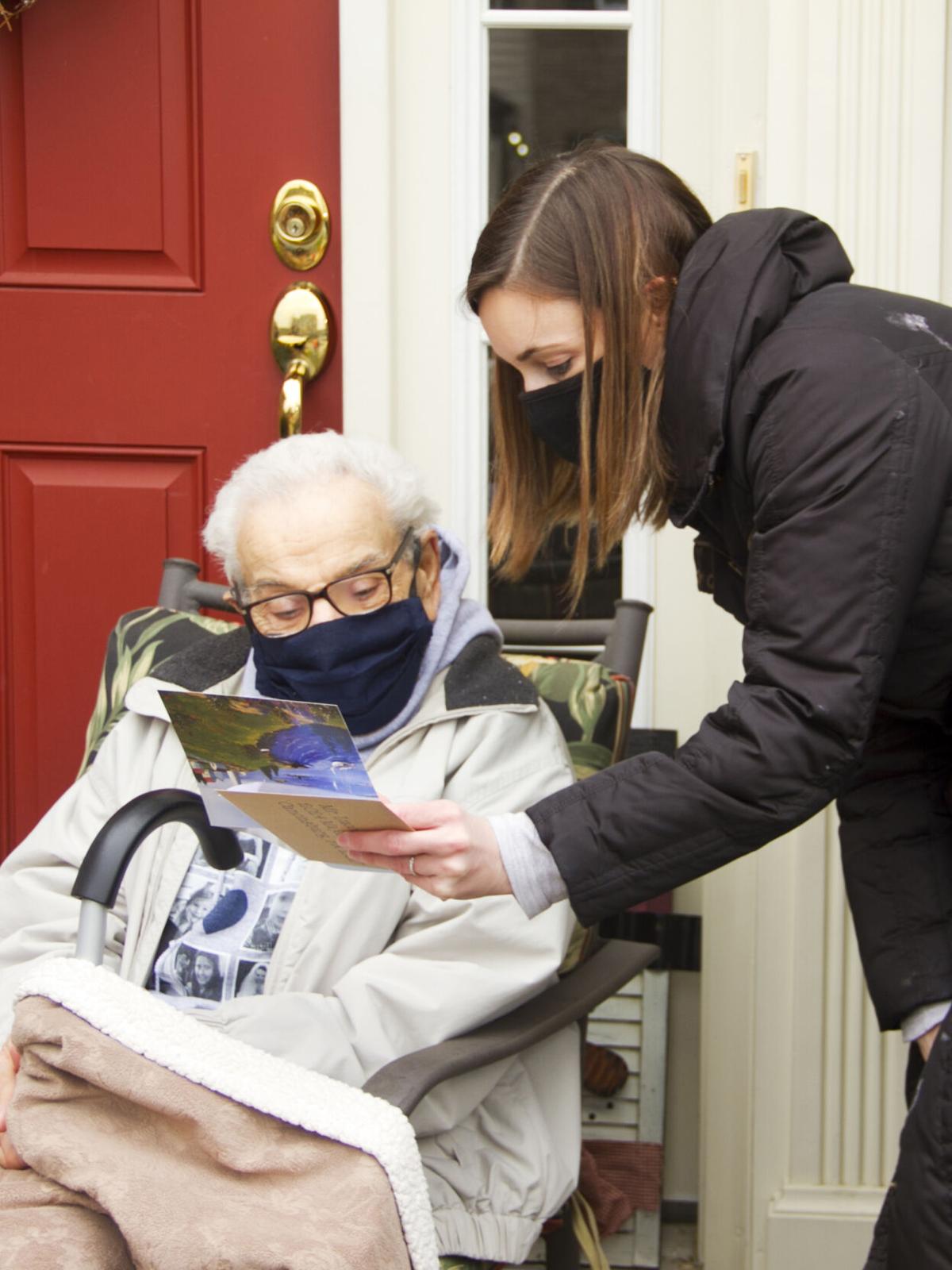 Meagan Truong of Mt. Lebanon shows a birthday card to her grandfather. 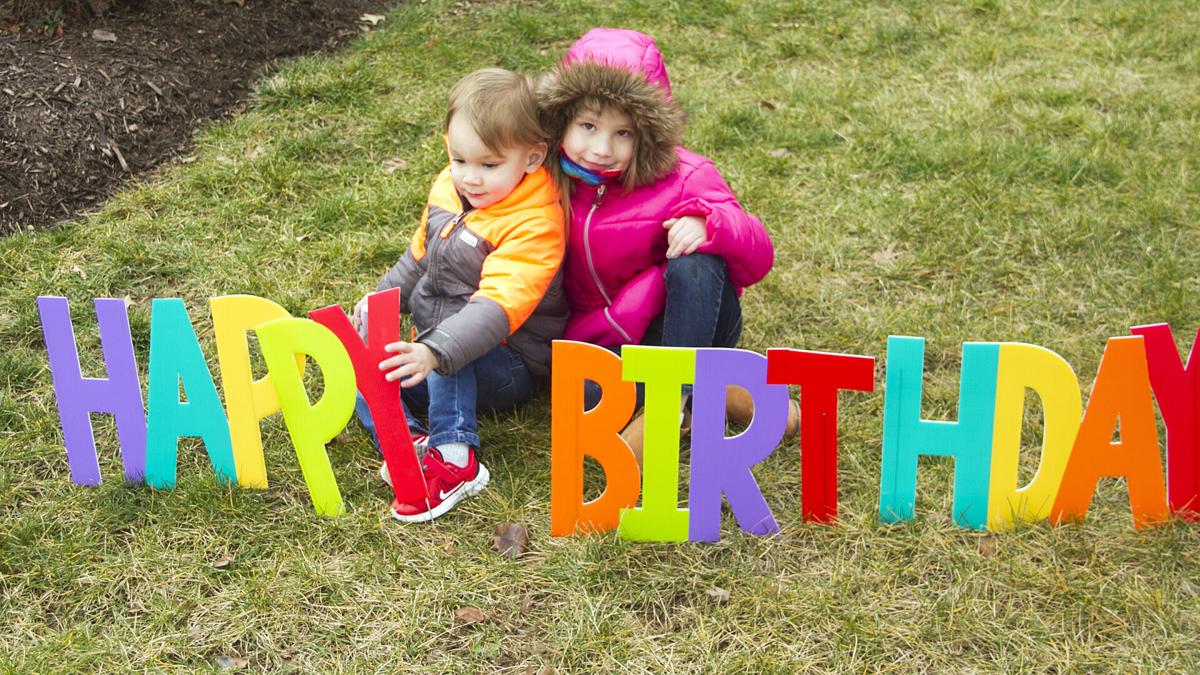 Milo and Charlotte Truong of Mt. Lebanon wish their great-grandfather a happy birthday. 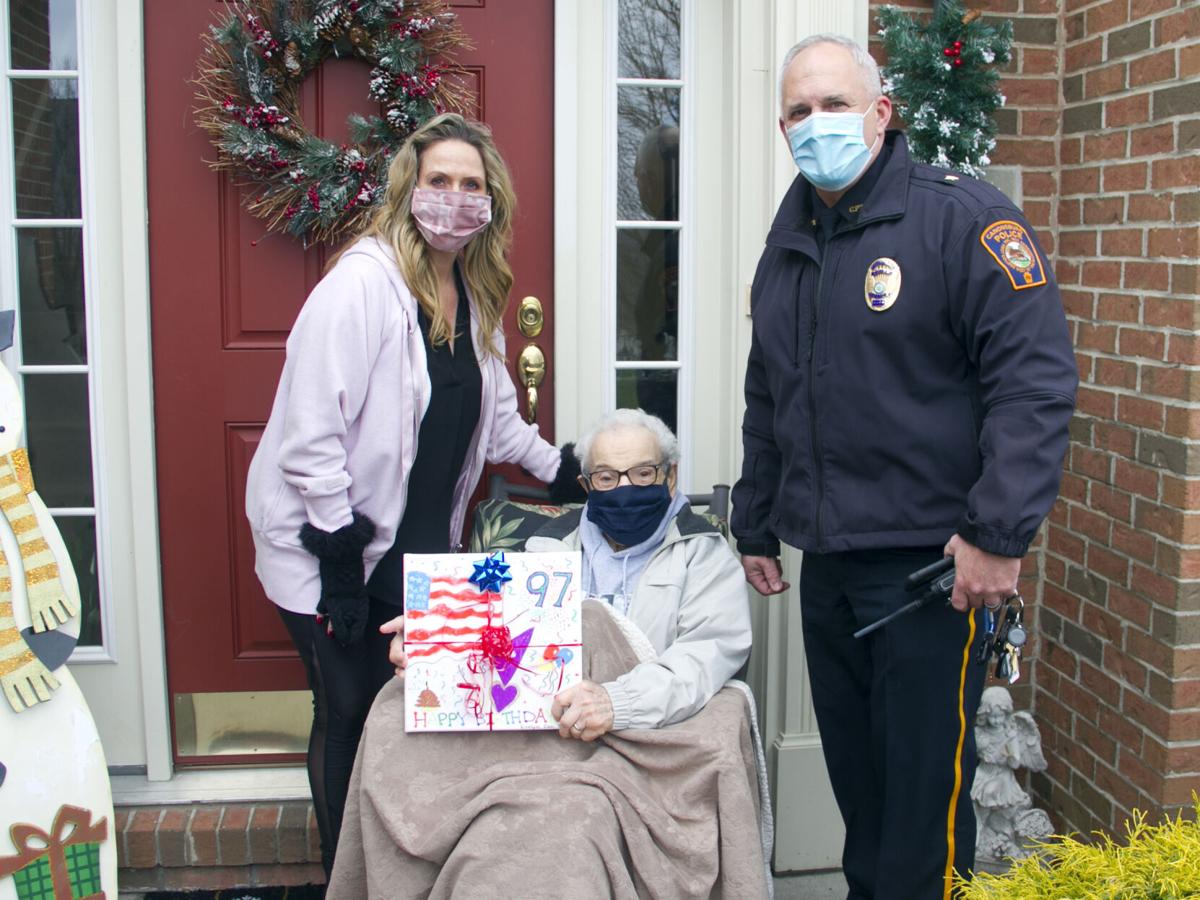 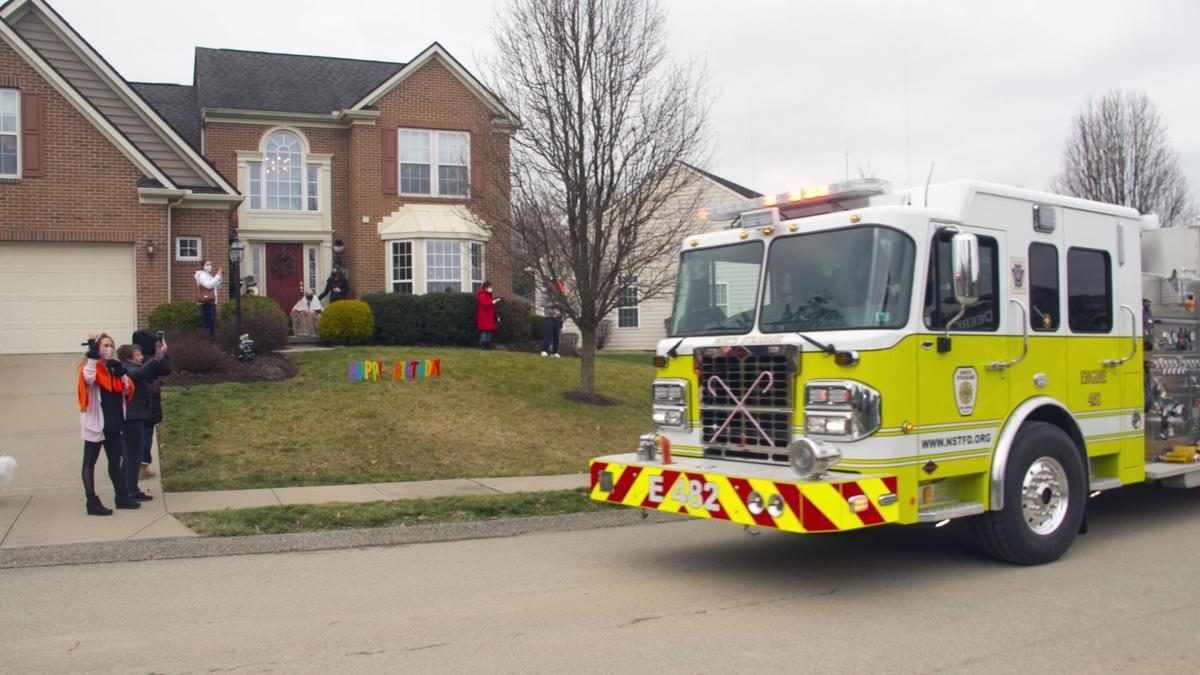 A few weeks before he turned 21, Alfred Luconti injured his hand so badly that he eventually underwent three operations.

That turned out to be good news.

“Had he not been wounded, he wouldn’t be with us,” said Mary Anne Fassinger, his daughter. “We’re very lucky to have him.”

The injury occurred in December 1944, shortly before the U.S. Army tank on which PFC Luconti was serving took part in the Battle of the Bulge, the last German offensive of World War II. Had he stayed with the tank instead of being hospitalized, the likelihood is that Luconti would not have survived the battle.

As it turns out, he was able to celebrate his 97th birthday Jan. 7 at his North Strabane Township home, with family members, friends and neighbors gathering as local police and fire vehicles passed by to mark the occasion.

Bundled for protection against the chilly afternoon weather as he sat on his front porch, the former longtime resident of Bethel Park recalled being sent to France in the wake of Army casualties suffered during Allied landing operations on D-Day, June 6, 1944.

“I think it was two days after the invasion,” Luconti said. “I went through all of Normandy, all of northern France, Luxembourg. I got into Germany, and we got into a big tank battle.”

He provided further details in a video interview recorded for the Library of Congress American Folklife Center’s Veterans History Project.

“When we did get inside of Germany, we were so happy to get that far,” he said in the interview. “We just raised the gun as high as we could and let out a couple of shells. We didn’t know where they were going to land. We just wanted them to hit somewhere in Germany.”

His duties with Company C of the 741st Tank Battalion included operating his vehicle’s 75 mm gun, and he sustained his hand injury in a loading accident.

“It jammed my fingers up against the back of the tank, and I ended up with one of my fingers just a piece of skin holding it, and the other one was split wide open,” he said in the video. “Shortly after that, the Battle of the Bulge began, and I know our outfit participated in it. And I’m thinking that our tank must have been hit.”

He had sent a letter to his tank commander, and it was returned marked “deceased.”

Following his injury, for which he was awarded a Purple Heart, Luconti was sent to hospitals in France and England, and then to the Army’s Crile General Hospital in Cleveland.

“They wanted to operate again once I came out of the service,” he said in the archival interview, “and I refused it because I figured, if they can’t fix it with three operations, why go for a fourth?”

Around that time, he embarked on his 73-year marriage to the former Columbia Scalese, who passed way Dec. 21, 2019.

A native of Pittsburgh’s Lower Hill District, Luconti lived in Brookline before moving to Bethel Park. He worked for the U.S. Postal Service, retiring in 1990.

More than three decades later, he gave a succinct reply to the inevitable question about his longevity.

In the Veterans History Project video, he talks about Columbia having sent him a letter that included a copy of the Prayer to St. Jude.

“She said, ‘Say this every day,’ which I did,” Luconti recalls.

“I used to say that thing, and I think it got me through the war.”

Perhaps it has applied to the next three-quarters of a century, as well.