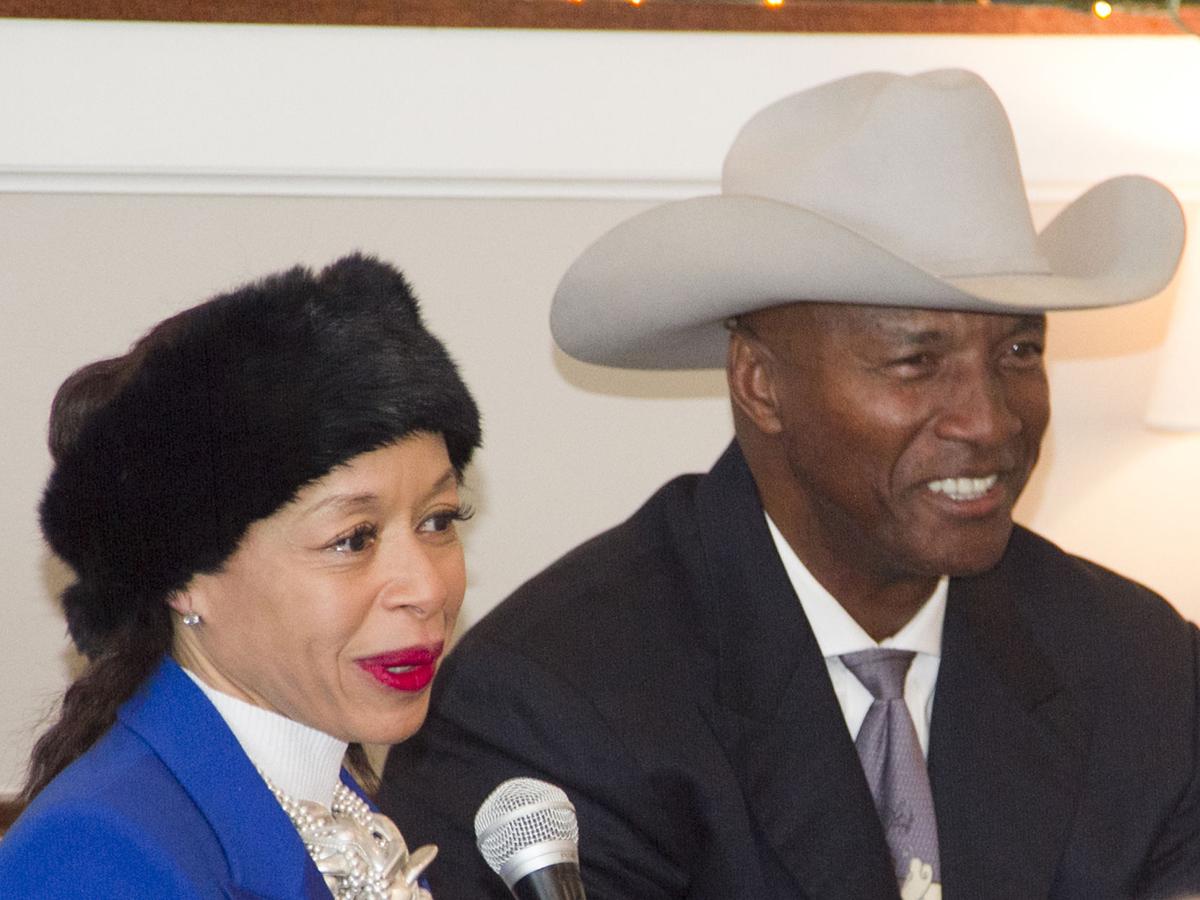 Mel Blount is joined by his wife, TiAnda, at the luncheon. 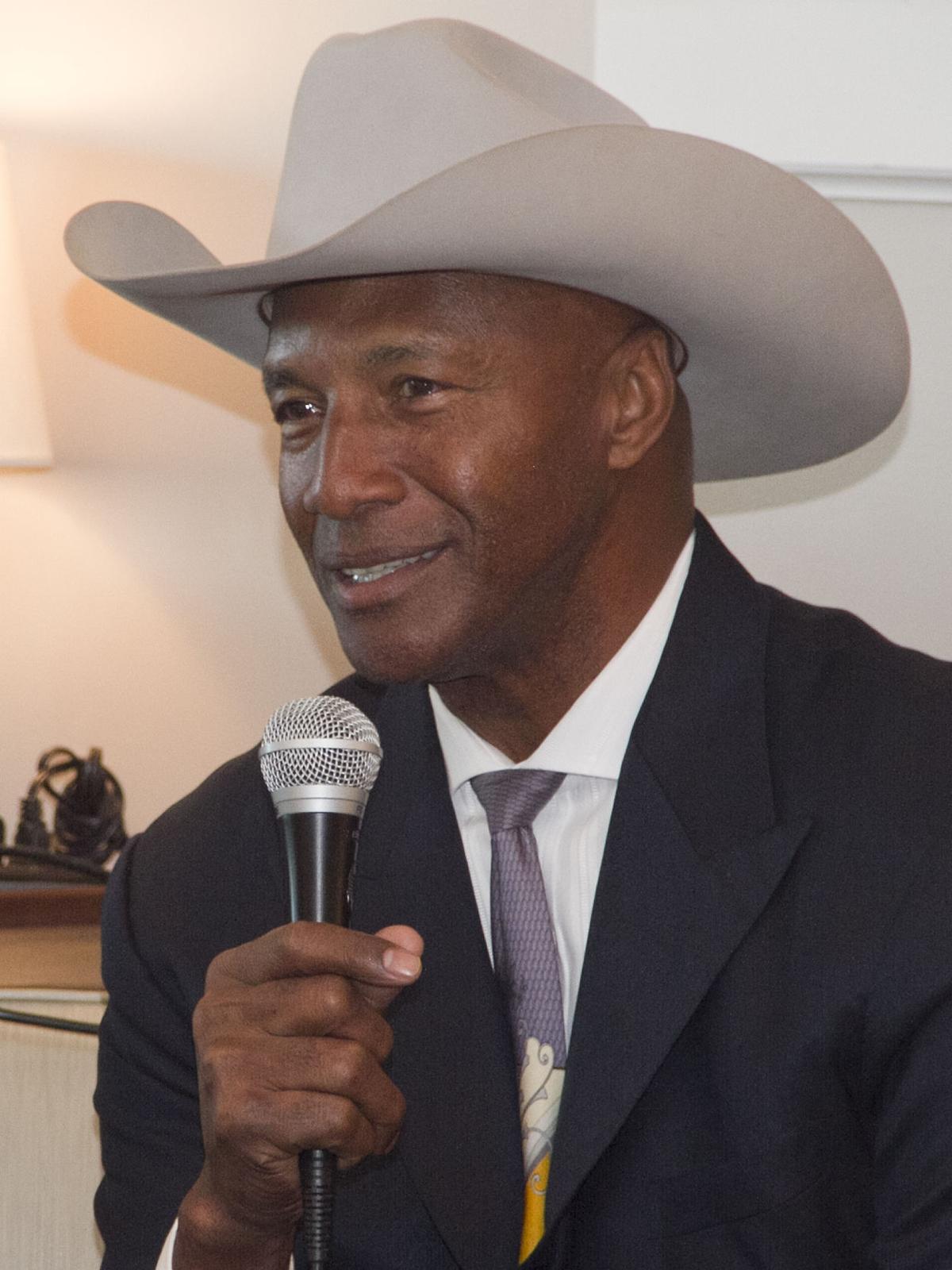 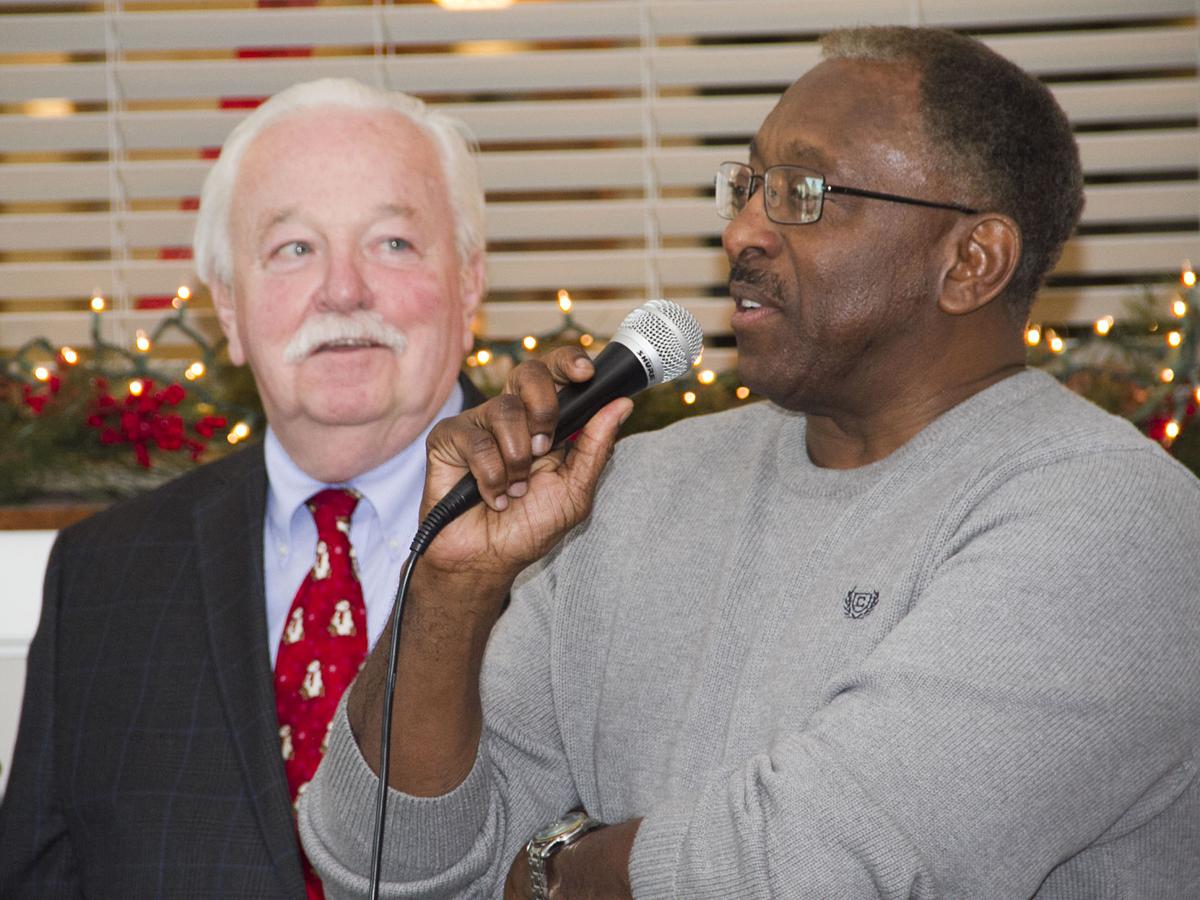 J.T. Thomas, a defensive back on the Pittsburgh Steelers' first four Super Bowl-winning teams, is another Good Guys guest of Jim O'Brien, right.

During a playing career that rates among the finest in National Football League history, Mel Blount often would visit his family home in Georgia.

“All the kids who knew my nieces and nephews, they would come out to the farm, and they wanted pictures taken. They’d want autographs. They’d want you to throw them the football,” the Pittsburgh Steelers legend recalled. “It’s like the Lord spoke to me and said, you know what? These kids are craving more than autographs and footballs, and you can do more than just sign autographs.

“And out of that experience, the youth home was born.”

For 25 years, he housed at-risk boys on his Buffalo Township property, which now hosts programs in connection with the Mel Blount Youth Leadership Initiative. On Dec. 19, he joined former teammates Dwayne Woodruff and J.T. Thomas as special guests at the year’s final Good Guys luncheon, organized and hosted by author Jim O’Brien at Atria’s Restaurant in Peters Township.

Along with his Hall of Fame career as a cornerback, Blount spoke about his experiences with the Mel Blount Youth Home, which he founded on the same farm in Toombs County, Ga., where he grew up as the youngest of 11 children. The first youth home resident was a boy from southern Florida who had gotten into considerable trouble.

“There was a young person working in the Fort Lauderdale area in the court system who had heard about me starting this youth home,” and Blount was contacted, he recalled. “I flew down to Fort Lauderdale, went to court to hear this kid’s case, and in the process, the judge awarded me this child.”

Newspapers all over the country printed the Associated Press photograph of Blount hugging the boy following the award.

“In today’s world, they would say it went viral. That picture actually became the logo for our boys’ home back in 1983,” he said, reporting that the young man has had a successful life as a family man.

In 1989, Blount opened his second home for youth, in Washington County. The problems he faced in seeing the project to fruition are detailed in the revealingly titled book he co-wrote with Cynthia Sterling, “The Cross Burns Brightly: A Hall-of-Famer Tackles Racism and Adversity to Help Troubled Boys.”

His perseverance led to numerous success stories among the residents, including this example he provided at the luncheon:

“We had a young man who now is working on his master’s degree, who came to us and could never figure out why he was in the boys’ home. The problem was his parents didn’t want him, and Children and Youth Services had sent him to our facility.

“We helped him get through high school and sent him to Morehouse College in Atlanta. He graduated from there, and now he’s at Mississippi Valley State.”

Another resident later served on active duty in the Middle East.

“He came back in his military uniform, and he was at one of our dinners that we have every year,” Blount recalled. “He talked about how the Mel Blount Youth Home, what he had learned there and his faith, had helped him get through the war in Iraq.”

Until 2014, the home was a licensed residential facility for adjudicated youths. Following a shift in state policy, no more long-term residents were housed there.

Blount said he often receives questions about his motivation.

Although he tends to downplay his accomplishments on the playing field during his 14 years with the Steelers – including the AP naming him the NFL’s defensive player of the year in 1975, to go along with those four Super Bowl rings – Blount apprised the luncheon crowd of a recent turn of events that caught his attention:

“I can brag about this, because it has impressed me. There have been 25,400 men who have played one year or more in the National Football League, and I have been selected as one of the 100 greatest players in the history of the game.”

He also spoke of his upbringing and especially about his mother, Alice Sharpe Blount (1907-2010), who gave birth to every one of her seven sons and four daughters at home.

It seems that she never attended a game in which Mel was playing football, at Lyons High School or Southern University, or even with the Steelers. A reporter once asked her why.

“She looked at him and, just as sincerely as she could, she said, ‘Somebody had to stay home and pray,’” her son reported. “Of all the quotes about my mother, I think that is one of the most profound answers that I’ve ever heard. You know what’s amazing about that? I never got hurt. And so I think there’s something about prayer that God does answer.”