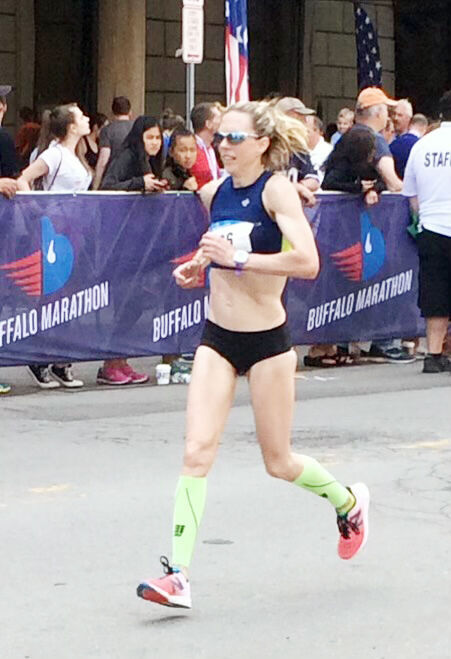 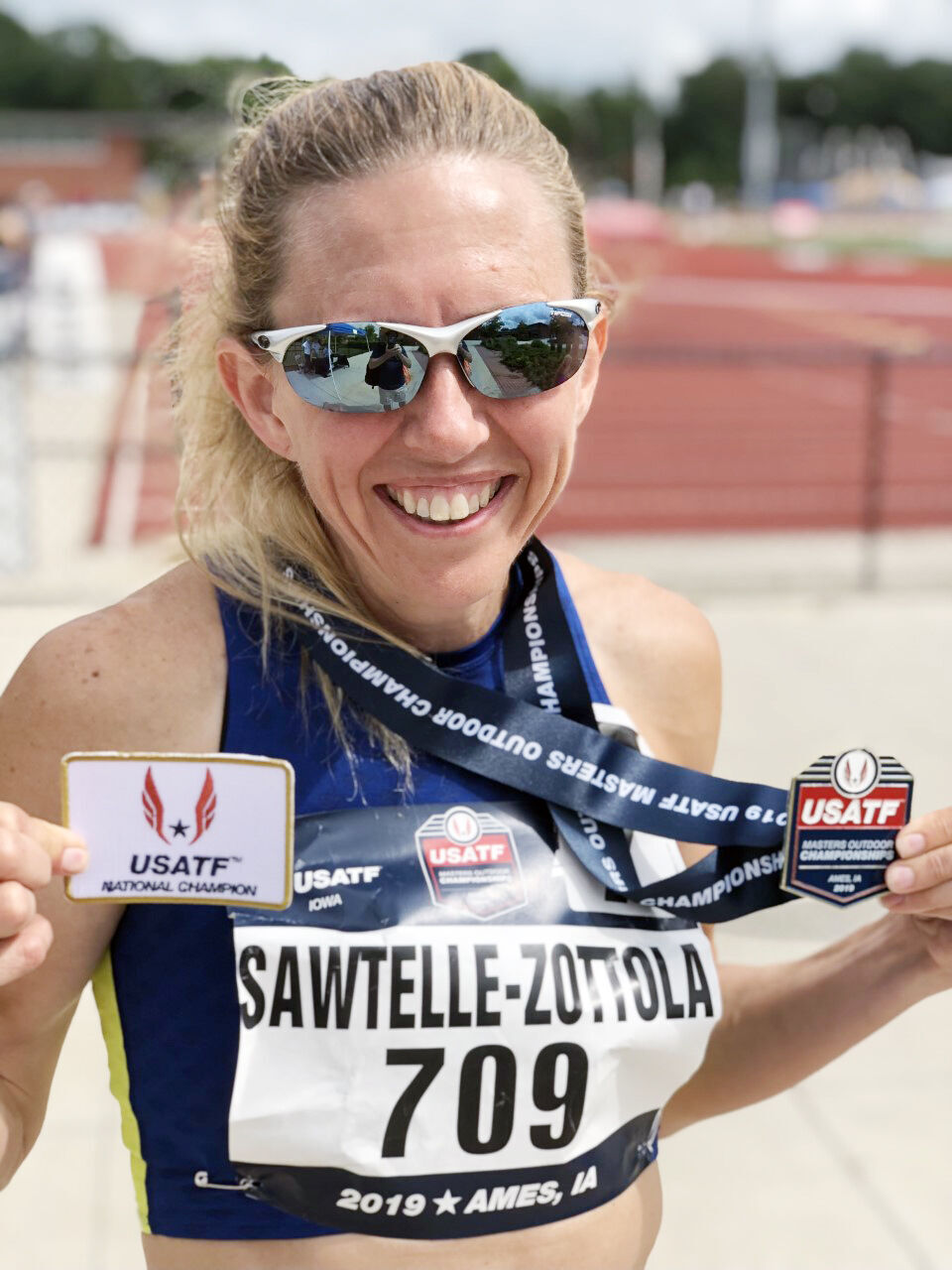 Mindy Sawtelle-Zottola won the 5K national title at the USATF Masters Championship in 2019. 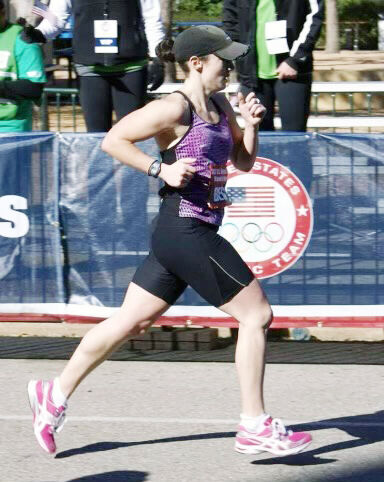 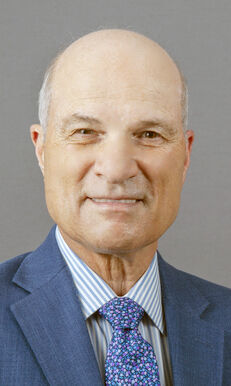 Mindy Sawtelle-Zottola won the 5K national title at the USATF Masters Championship in 2019.

On Tuesday, the four-time Olympic gold medalist returned to competition to claim the bronze medal on the balance beam.

Her decision has sparked discussions about the importance of prioritizing mental health, especially for athletes, whose mental well-being has long been secondary to physical health.

Upper St. Clair swimming coach Dave Schraven, who competed in the U.S. Olympic Trials in 1988 and coaches 2021 Olympic qualifier Josh Matheny of Upper St. Clair, praised Biles for making mental health a priority and for talking openly about the subject.

“One of the things I’ve thought about is the weight of the expectations of other people, and that’s at the heart of what this is about, the mental well-being of these athletes,” said Schraven.

Schraven, a Buffalo, N.Y., native, remembers vividly the pressure he faced as a six-time New York state champion and a swimmer on Standford University’s NCAA Division I national championship teams as a freshman and sophomore.

“I was probably the best, or one of the best swimmers ever to come out of Buffalo, and people would say, ‘Dave is going to be in the Olympics some day.’ But I was swimming with the best of the best,” said Schraven. “On the one hand, there were the perceived expectations of people I grew up with, and then there was the reality that yes, I’m swimming at the highest level, but I’m nowhere near the best.

“It was a rude awakening,” he added. “I couldn’t worry about how I was performing compared to other people, I really had to just kind of compare my performances to what I had done previously, and it took me several years in college to figure that out.”

Anna Beck-Lee, a former Washington High School and Clarion University runner whose storied career included qualifying for the 2012 U.S. Olympic Marathon Trials, said she understands and supports Biles’ decision to drop out of the competition.

“What Simone Biles is doing now is impactful, and she’s serving as a role model,” said Beck-Lee.

Beck-Lee, who placed 10th at the Pittsburgh Marathon in 2009 and finished 28th at the Boston Marathon in 2011, said discussions about mental health didn’t occur when she was running in high school and college.

“It was hush-hush,” she said. “Simone and other athletes are opening the door to the realities of the pressures in sports and making it all right to have the conversation.”

Mental health experts are also applauding the decision of Biles and other athletes, including Naomi Osaka and Michael Phelps, who have shared their mental health struggles.

“I think it’s wonderful that really great athletes are coming forward and acknowledging their mental health issues, their experiences, and their anxieties. Just because you’re a great athlete doesn’t mean you’re immune,” said Dr. Anthony Mannarino, Allegheny Health Network Chair of Psychiatry and Behavioral Health, and director of the Center for Traumatic Stress in Children and Adolescents. “For these athletes to be a role model for other teenagers and young adults, to let them know that it’s OK to have these concerns and to get help if you do, is really important.

“Mental health issues affect many of us, including great athletes,” he added. “These courageous young men and women, by acknowledging what they’ve been through, are setting the tone for others to come forward and seek help.”

Mannarino noted it’s not just elite athletes who feel the pressure of competition.

“Our local athletes in high schools and colleges in our communities feel pressure to succeed and bet the best, and there’s anxiety about that,” said Mannarino. “With Simone Biles coming out and acknowledging the pressure, saying the weight of the world was on her shoulders, I can see high school athletes trying to get a scholarship or college athletes trying to keep a scholarship, knowing that this happens to world class athletes, too, helps them not to be afraid to get help.”

Schraven said he encourages his swimmers, at all levels, to “distinguish between the things you can control and what you can’t.”

“You can’t control what other people’s expectations are, so why worry about it? It’s not easy to do, but that needs to be the message,” he said.

Mindy Sawtelle-Zottola of Indiana, 49, an elite marathon runner who placed fifth in the 2016 Pittsburgh Marathon and qualified for the 2000 U.S. Olympic trials, believes Biles made the right choice, noting the gymnast risked serious injury if she had continued. By stopping, Biles chose to put her herself and her safety first.

“I was so happy for her when she made the decision. I hope people start focusing more on mental health,” said Sawtelle-Zottola, who started running at age 6 and, after graduating from high school in 1991, gave up running and a full scholarship to Penn State University.

“I was burned out and exhausted, and I needed a mental break,” said Sawtelle-Zottola, who began running again in 1996 after watching two runners she competed against in high school competing as members of the U.S. Olympic Team.

Sawtelle-Zottola’s own quest to compete in the 2000 Olympics ended at the Olympic marathon trials when she shattered her tibia at mile 6.

She trained for the trials despite having a stress fracture, and despite her doctor’s warning that the leg likely would give out during the race.

“But I’d earned that ticket to the Olympic trials and I wanted the Olympic dream bad, and I didn’t want to let my whole support team down,” Sawtelle-Zottola. “I felt like I let everybody down. People expect you to perform, the expect you to win. I feel like I did it for everyone else.”

At the age of 30, Sawtelle-Zottola earned a full scholarship to Indiana University of Pennsylvania to run track and cross country, where she was an eight-time All-American and set the school 6K record.

In October, she will compete in her 40th marathon.

“Now, when I run, it’s for me,” said Sawtelle-Zottola. “Mental health is so important. I think Simone Biles will be more known for doing this, for bringing awareness to mental health, than for winning medals.”

Joe Sarver of Washington, a seven-time All-Conference runner at West Liberty University who has coached athletes that have run in national, Olympic trials and World Game races, said Biles was under “a tremendous amount of pressure to perform for herself and team.”

“You’re on a razor’s edge to perform, and there are things that can take you off of that edge, but you do not want to let your teammates down and so you keep going,” said Sarver, acknowledging he competed when he was injured. “She has a ton of pressure on her, the pressure of being the best in the world, the pressure from sponsors if she doesn’t medal, the pressures of being on a team that has a chance to win a championship.”

Mannarino said he was happy to see Biles return to capture a medal.

“To see her come back and gets the bronze, wow isn’t that something?” he said. “That’s pretty remarkable.”

“Who are we to judge Simone Biles? I think she’s earned the benefit of the doubt,” he said. “They say until you’ve walked a mile in someone’s shoes, you don’t know what they’re going through. She’s earned our empathy.”

Karen Mansfield is an award-winning journalist and mom of five who has been a staff writer for the Observer-Reporter since 1988. She enjoys reading, the Pittsburgh Steelers, a good glass of wine and nice people.