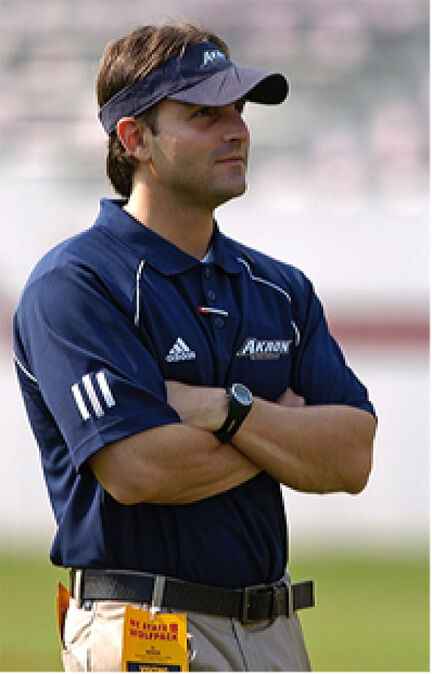 Mauro Monz has been hired to become the next Seton LaSalle football coach.

Mauro Monz has been hired to become the next Seton LaSalle football coach.

Even though Seton LaSalle experienced back-to-back losing seasons, Mauro Monz of South Fayette views the task as his alma mater’s latest head football coach as that of reviving rather than rebuilding the program.

A member of a Rebels team that reached the WPIAL semifinals almost 30 years ago, Monz said he intends to recapture that “lightning in a bottle” that produced six district titles, a dozen conference championships and three appearances in the state finals in the program’s storied past.

“We’re not rebuilding, not trying to be on the map. We are on the map. We have the tradition and history,” he said. “We have been to the pinnacle. Our vision is our past.

“From uniforms to coaches to players, we are going to evaluate the current program with enthusiasm and a positivity. Our mind set and the identity we see for our team is back to the future. We are looking for a resurgence of the program.”

As a player, Monz knows what it is like to rally around another SLS alumni that resurrected the Rebels. He played for Greg Gattuso, who guided SLS to three playoff appearances, a WPIAL title in 1990 and a PIAA runner-up showing before moving on to the college ranks. After 12 seasons at Duquesne University and a 97-32 record, Gattuso moved on the University of Albany.

Monz said aside from meeting his wife, Dana, who was an SLS cheerleader, playing at the school provided him with some of his fondest memories.

Monz said he learned a great deal from Gattuso and his staff, which included Bob Palko, now at Mt. Lebanon after winning eight district championships at West Allegheny, Central Catholic’s Terry Totten and Lou Cerro, who played and coached successfully at SLS before turning Montour into a champion.

“Thirty years ago this fall, I was the quarterback and what other way to express tradition as for these kids to see one of their own back here trying to help the school. Who wouldn’t want to be part to that — the energy and be enthused about it?”

After his playing days at Duquesne University, where he twice gained All-Metro Conference and All-America acclaim as a defensive back, Monz became enthralled with coaching.

His first assignment was as an assistant to Joe Walton in 1997 at Robert Morris University. He helped the Colonials win five NEC titles.

His 25-year coaching career includs stints at Duquesne, Akron, Carlynton, Mt. Lebanon and Baldwin high schools. He also became the youngest head coach at any level in the country at West Virginia University Institute of Technology in 2003.

“Football is such a great game. It has given so much to me,” Monz said, noting he earned both a bachelor’s and masters degree during his playing days. “It’s done everything to me and the life lessons learned are innumerable.

“Football teaches you leadership, discipline, tenacity. It gives you a combination of all that. It’s the ultra, camaraderie sport. If I can help the next young kid gain that and maybe help them get into a school, then I think that will make me be a success in this position.”

With 30 players on roster, Monz’s immediate objective is to “generate enthusiasm” to increase the numbers. The school has scheduled an introductory meeting with the new coach for Dec. 10.

Monz said he is working on putting together a “quality” supporting staff and establish an offseason strength-and-conditioning program.

“We are hoping to wake a sleeping giant,” he said. “We want to develop players and instill in them a strong work ethic as well as provide a vision. We want to get the kids and parents to trust in me but it’s a two-way street. We also want to gain the support of alumni and reconnect with them.

“Obviously, we want to have a resurgence in the community,” he added. “Bridge our history and catch fire among those in the community. Get them on board and channel their enthusiasm. Hopefully all of that brings success.”

What they are saying about Mauro Monz

“I’ve known Mauro Monz since I coached him as a starter in high school. He’s played for me and he’s coached for me, and his dedication to excellence in every aspect of the game has been consistent throughout his career. I believe in him 100%, and I know that he will do a great job in leading the Seton LaSalle Rebels.”

“I want to commend Principal Lauren Martin and President Lisa Osterhaus on how they’ve conducted (the search) process, bringing in professionals on a committee to help narrow their head coaching search. It really made me proud as a Seton LaSalle alumnus to see all of the amazing applicants who submitted their resume for the job. We had some tremendous talent from which to choose and I’m glad the opportunity has gone to an alumnus. Mauro has extraordinary passion and knowledge of the game, and it is time for the entire Seton LaSalle community to offer our full support as he leads our football program into a successful future.”

“We conducted our search with the goal of finding a head coach who could also serve as a mentor to the young men on our team, and whose personal integrity is just as commendable as his football acumen. Coach Monz excels in both areas. We look forward to seeing his positive impact on our football program’s success, and on the lives of our players and students.”

“This is an exciting time for the entire Seton LaSalle community. The committee worked tirelessly and upheld the integrity of the vetting process to put forward the best candidates for the job. This experience confirms what we already knew...Rebel pride runs deep.  We are "ALL IN" for a new era of Rebel football.