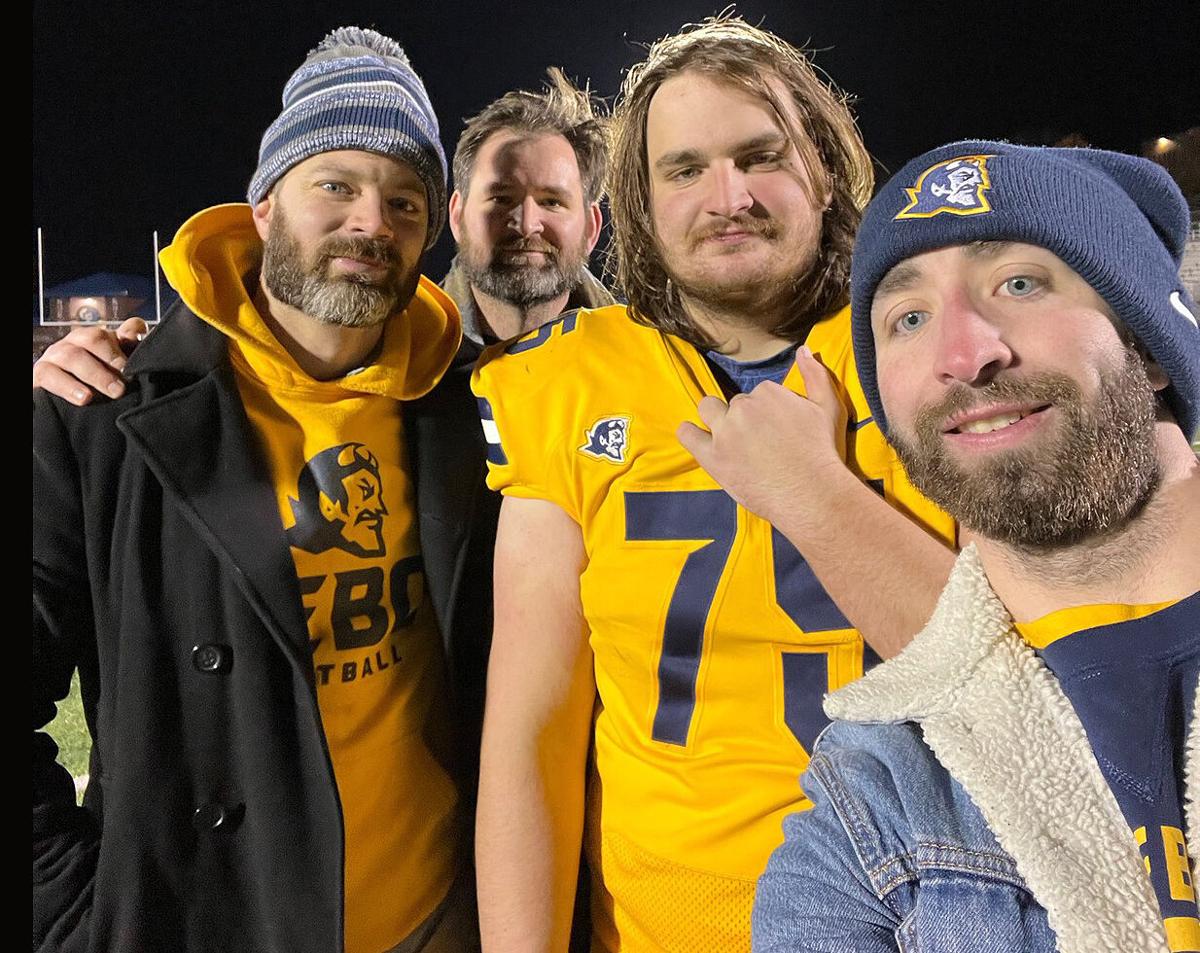 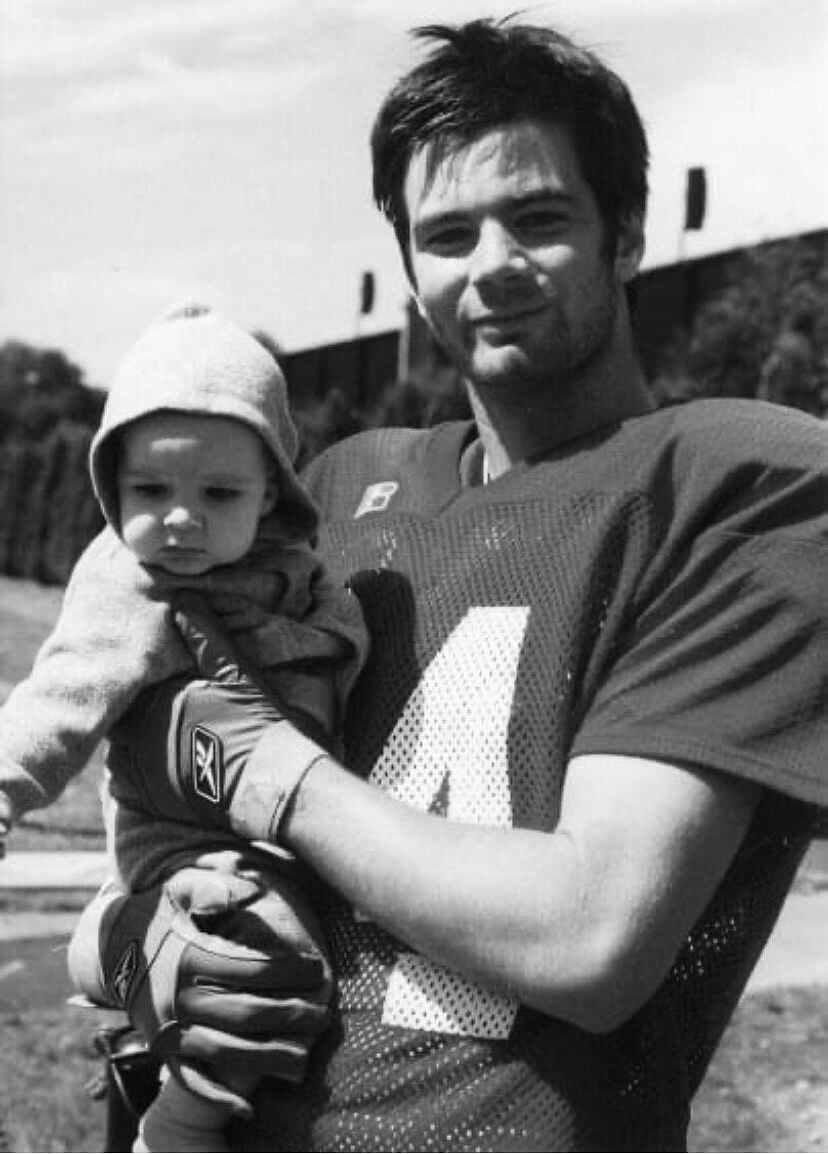 The patriarch of the Harvey clan, Tom, sported the No. 75 jersey worn by his youngest son, William, during this year’s WPIAL and PIAA championship games. 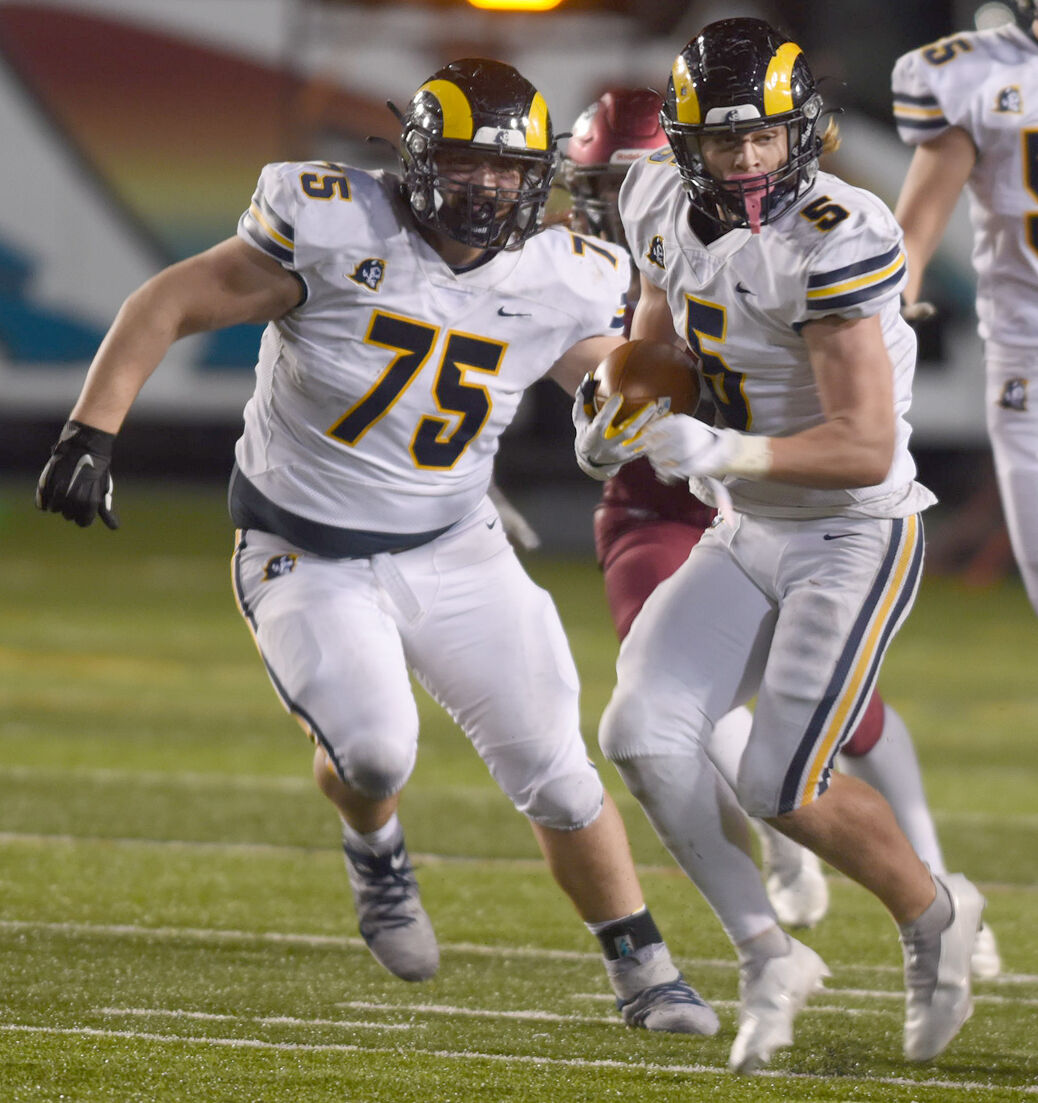 William Harvey (75) cleared a path for Alex Tecza (5) to rush for 89 yards and three touchdowns during Mt. Lebanon's 35-17 victory against St. Joseph's Prep in the PIAA Class 6A championship football game. 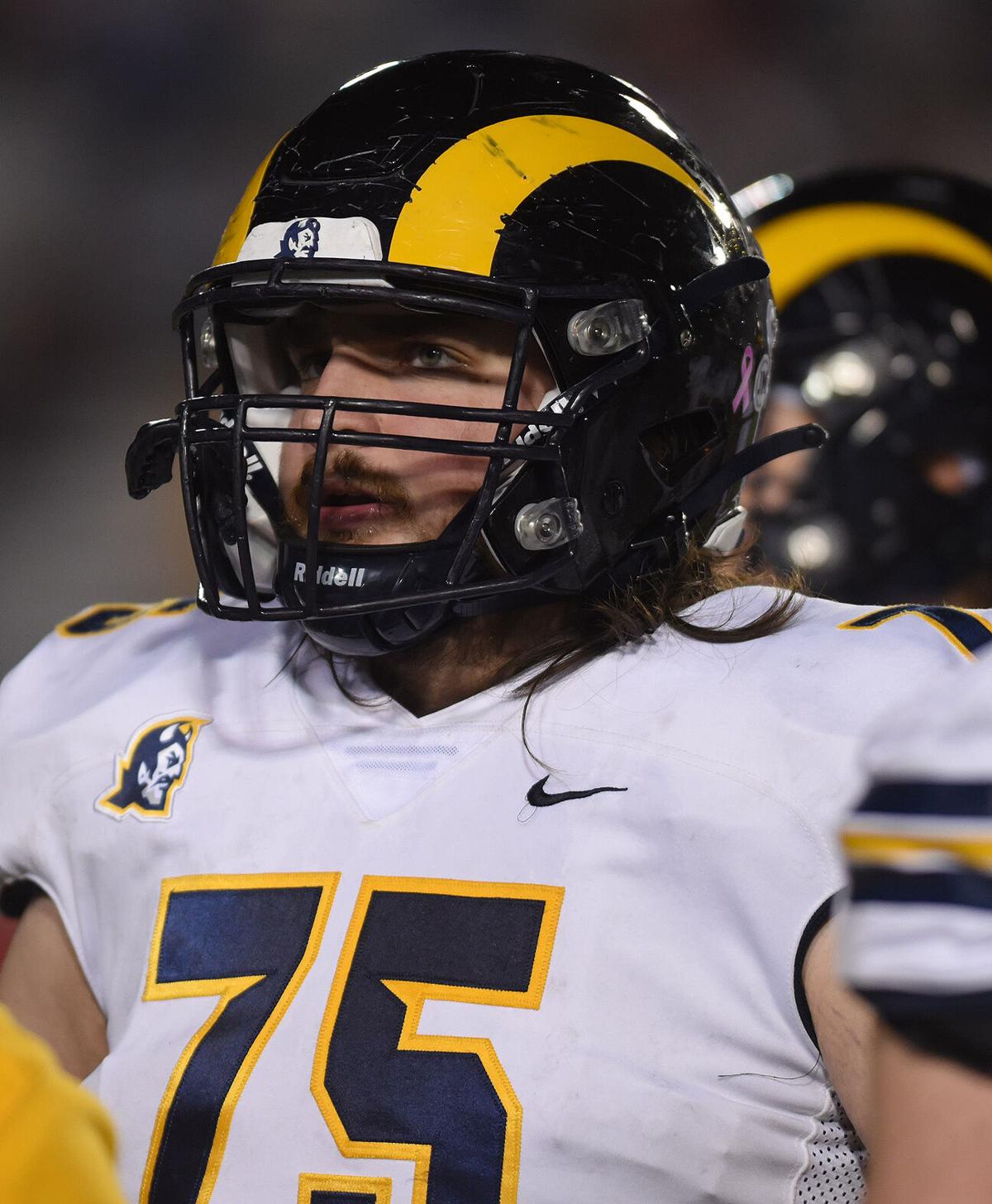 William Harvey keeps his eye focused on helping Mt. Lebanon win its first state championship in football. A two-way lineman, he is being recruited by Patriot and Ivy League schools, including Brown and Bucknell.

The patriarch of the Harvey clan, Tom, sported the No. 75 jersey worn by his youngest son, William, during this year’s WPIAL and PIAA championship games.

William Harvey (75) cleared a path for Alex Tecza (5) to rush for 89 yards and three touchdowns during Mt. Lebanon's 35-17 victory against St. Joseph's Prep in the PIAA Class 6A championship football game.

William Harvey keeps his eye focused on helping Mt. Lebanon win its first state championship in football. A two-way lineman, he is being recruited by Patriot and Ivy League schools, including Brown and Bucknell.

For more than two decades, the Harvey family has made its mark on Mt. Lebanon’s football program.

“It’s awesome,” said William, “but it is a little strange having a brother that is so much older than I am.”

At 39, James is the eldest of Thomas and Mary Harvey’s eight children. Peter, John and David all played football for the Blue Devils. There is also Theresa, who won a state champion at Lebo in volleyball, as well as Patricia and Kathleen.

James and his wife, Ali, have three children — Lochlan, 6, Marnie, 5, and Simone, 3. A Harvard graduate, James moved back to Mt. Lebanon two years ago after living in New York City where he worked for BBDO, a worldwide advertising agency.

“It’s crazy to think that William wasn’t even born when I was playing football at Mt. Lebanon,” James said. “It’s shocking to think that it has been that long since they won (a championship).”

In 2000, James was a wide receiver and defensive back on a Blue Devils team that defeated Woodland Hills, 14-13, at Three Rivers Stadium to capture a WPIAL title. The Wolverines featured Steve Breaston at quarterback. A Michigan graduate, Breaston went on to play wide receiver in the NFL.

James recalled having an interception in the WPIAL championship game, but also giving up a reception that almost led to the game becoming tied.

“I think a lot of players will tell you this, that there are a lot of life lessons you glean from football,” James said. “One is the amount of work that goes into doing something meaningful and the other, perhaps the biggest thing, is there are going to be a lot of ups and downs. Mistakes will be made. There will be failures along the way. It’s how you bounce back from them that matters.”

James stressed these points to William when he narrated a tape of the 2000 WPIAL championship game to him before the 2021 game.

“One thing that is tough growing up with older brothers or successful parents is you only hear about the glory. You don’t really hear about the mistakes,” James said. “I wanted to give William a sense of reality that you can come back from mistakes and even his older brother was not a perfect player. Not even close.”

James said it was a great bonding experience because the only memories William has of him as a youth are on film. He said the age difference gives him more of an “uncle vibe” than that of a sibling.

“It is kind of different,” William agreed. “I enjoy it though. James definitely has helped me.

“He’s gotten me mentally prepared and psyched up for games,” he continued. “He’s basically told me to play my heart out and that I can be better than he was.”

William managed to outdo his brother when Lebo defeated State College, 49-28, in the state semifinals. James and his Blue Devils lost to eventual state champion Cathedral Prep, a squad that featured 11 Division I prospects, in the PIAA quarterfinals.

Similarly in this year’s PIAA championship contest, Lebo faced a powerhouse from Philadelphia. St. Joseph’s Prep had won six of the past eight PIAA titles in the state’s highest classification, including three in a row at the Class 6A level.

The Hawks featured a plethora of Division I prospects and descendants of former NFL stars, including Josiah Trotter and Kennan Nelson, who was elected to play in the All-American Bowl. St. Joseph’s Prep averaged 31.5 points per game, sported a nine-game winning streak and surrendered 11 points per game.

Yet William and his mates rose to the occasion. A two-way starter, William helped anchor the offensive line and recorded three tackles, assisted on three others, and managed 2.5 tackles for a loss on defense.

“What linemen like Will, Owen (Halter), James (Kline) Kade (Capristo), Cooper (Austin), Joey (Peters) did was super special, amazing,” said Mt. Lebanon running back Alex Tecza. “To me, it’s the best front you could have on a football team. And it wasn’t just on offense, it was on defense, too. Credit goes to those guys. Those linemen have really stood up all season.”

“It’s funny we have had the debate as to who had the better team,” said James. “The WPIAL championship team has said they would love to line up and play against these guys. We’d never accept or admit another team was better than ours.”

James noted, however, the 2021 team’s ability to blow teams out. Mt. Lebanon outscored their five WPIAL and PIAA playoff opponents by a combined score of 206-83.

“Our games were all close, a touchdown or less,” James said. “What this team has done is mind boggling, difficult and so rare.”

Out of 553 high school football teams in Pennsylvania only Mt. Lebanon and Central Valley finished the year undefeated and with a coveted state championship.

“It’s difficult to come out and win one game let alone do it consistently day in and day out. It’s a monumental thing and a testament to these kids. They didn’t make mistakes. They were prefect. A once-in-a-generation group,” James said.

“I have never seen such a team work together so well with such amazing discipline and character. It was incredible to see how many of the guys worked so well and hard for zero recognition. All they wanted to do was win.”

“We believed in one another and every one doing their jobs,” he said. “It worked out. We all believed we could do this and we did. Being the best in the state is nice and it’s awesome also knowing that I will be able to have bragging rights in the family now.”

The Harveys hope the time span until Lebo’s next championship team won’t last as long as the previous 21-year gap in titles.

James and William are uncles to 12, including two boys. Their nephew Ronan Silva, whose father played for the Indianapolis Colts, is a third-grade student. He just capped his first season of tackle football with a youth championship.

“I felt I lived vicariously through this team. I wanted them to win and I would like to take some credit to contributing to the legacy that is Lebo football,” said James. “It’s a shame you only get a couple of years to watch them play because they were so fun to watch. You wish you can bottle it up and keep it around.

“My only regret is I’m bummed my parents didn’t have more kids,” he added. “I wished they had had four or five more.”