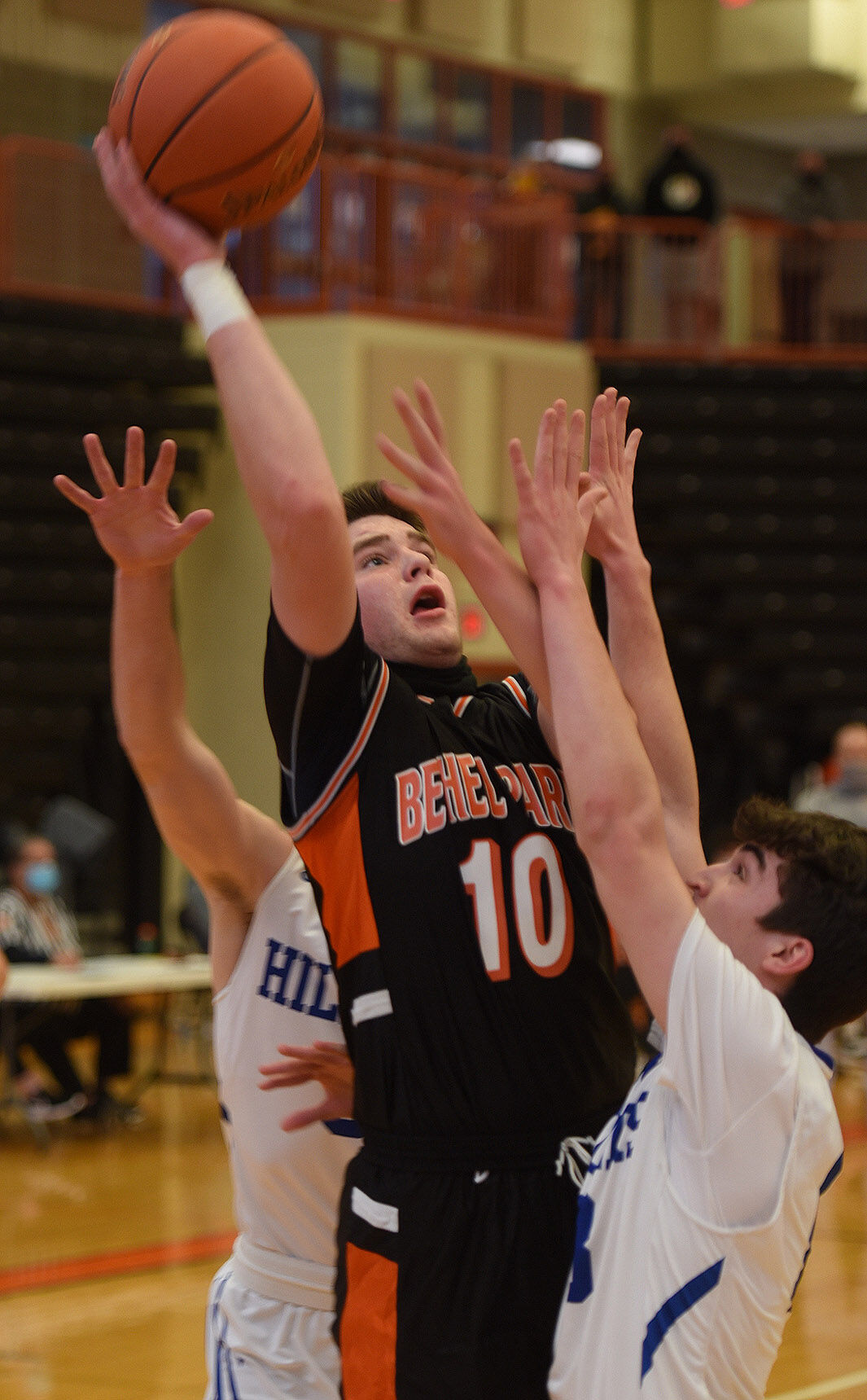 Bethel Park's Max Blanc gets off a shot against Trinity. 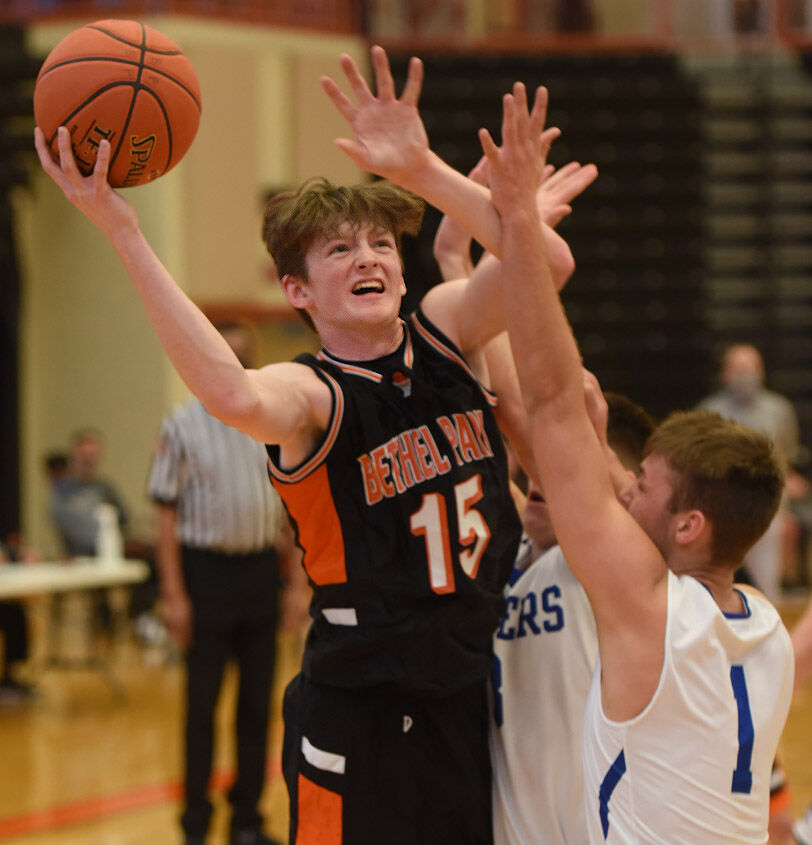 Bethel Park's Dolan Waldo puts up a shot against Trinity. 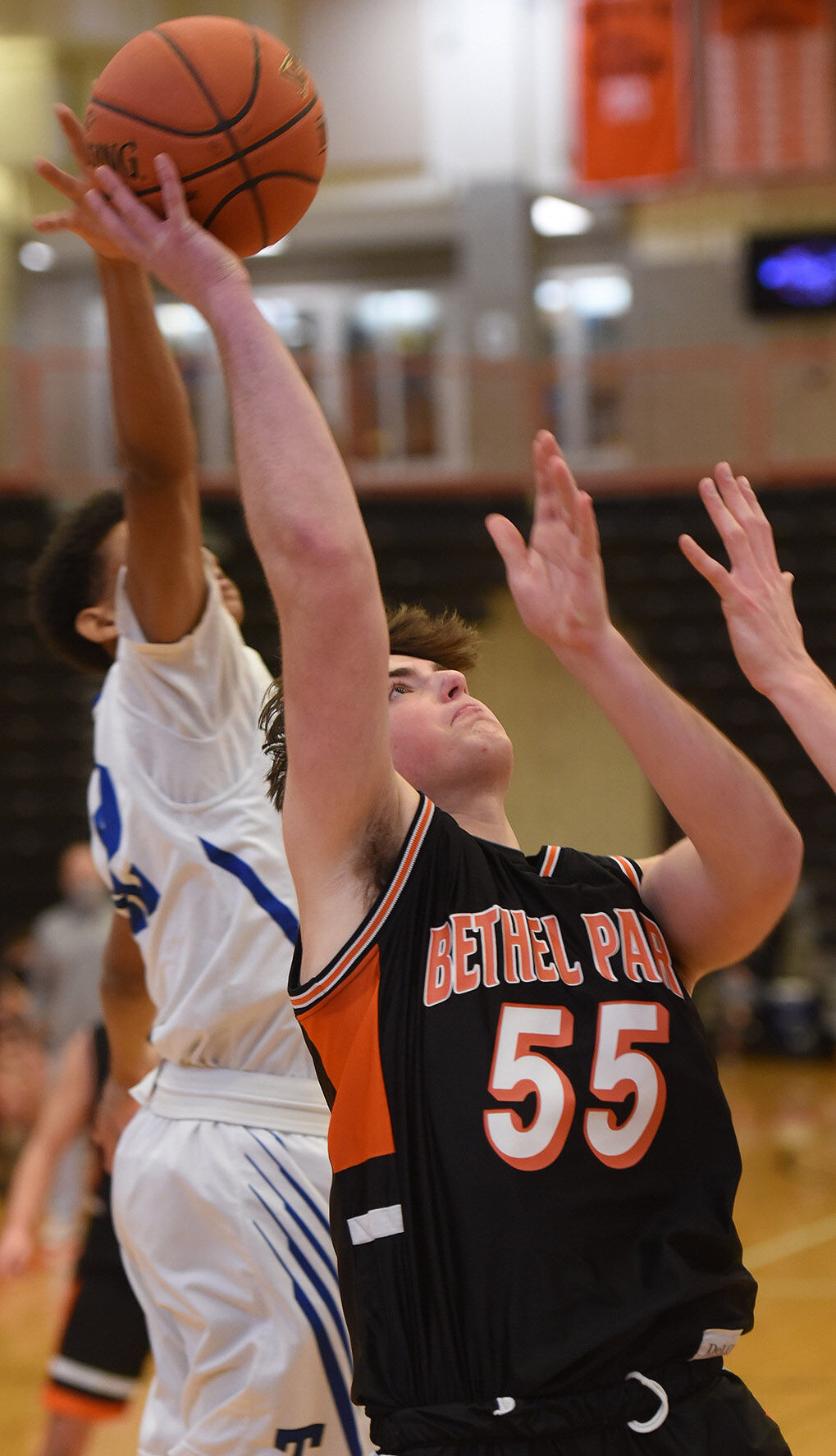 Bethel Park's Max Blanc gets off a shot against Trinity.

Bethel Park's Dolan Waldo puts up a shot against Trinity.

The Bethel Park boys basketball team rebounded from a 52-51 loss to Trinity and defeated Canon-McMillan, 44-31.

With the win, the Hawks evened their Class 6A Section 2 record to 1-1.

Dolan Waldo led Bethel Park’s offensive attack in both contests. He had 15 points against C-M and scored 25 against the Hillers.

The Blue Devils improved to 4-0 in section after posting a 54-52 overtime win against the Big Macs, and a 53-37 victory against Baldwin.

Against the Highlanders, Reinke scored 17 points. Evan Sentner scored 12 for the Blue Devils and Zach D’Alesandro followed with 10 points.

Both the Hawks and the Blue Devils dropped non-section contests against Pine-Richland.

In BP’s 62-43 loss, Waldo and Anthony Watson each contributed 10 points.

With the loss, Lebo fell to 5-4 overall. The Blue Devils’ battle at Peters Township, scheduled for Feb. 5, was postponed until Feb. 22.

The Indians, meanwhile, slipped to 3-6 overall after a 76-49 loss to Fox Chapel and a 68-53 setback against Central Catholic. Neither of the losses were section games.

Against the Foxes, Gavin Cote topped out with 12 points.

Against the Vikings, Cote finished with 11 while Julian Masco pitched in 10.

Although only 2-0 in Section 2, Upper St. Clair continued to dominate the WPIAL competition. The Panthers are 9-1 overall.

The Panthers cannot play league opponents, like Lebo, Peters and Baldwin because they require opponents to wear face masks while competing. Thus they have scheduled willing non-conference foes.

Porter Rauch scored a team-high 20 points for the Panthers, while Dave Pantelis scored 12, Luke Banbury and Luke Gensler each chipped in 11 points.

Chartiers Valley completed the first half of Section 2 play with a 4-1 record after posting a 73-57 win over Montour and a 53-33 victory over South Fayette.

Against the Lions, Garrett Alauzen scored 15 points and Brayden Reynolds added 13. Kaden Ring had nine for the Lions.

Against the Spartans, Reynolds fired in 22 points. Carter Mastovich followed with 12.

Reynolds propelled CV to an 84-53 non-conference win against Trinity. He exploded for 31 points, while Alauzen chipped in 12.

It was the fifth time this season Reynolds scored 30 or more points. He ranks sixth in the WPIAL in scoring with a 25.8 average.

In other Section 2 action, South Fayette succumbed to West Allegheny 59-56, but rebounded to beat Trinity, 57-40.

In the win against the Hillers, Alex Hall poured in 23 points for the Lions, who improved to 1-2 in the division and 4-3 overall.

Logan Yater followed with 11 points for South Fayette against the Hillers. He provided 11 points in the loss to the Indians.

Seton LaSalle evened its Section 2 record with a 65-28 victory over Freedom, before knocking off New Brighton. The Rebels are 5-4 overall.

Emmett Harris led the offensive attack in both contests. He had 15 points against Freedom and 22 against New Brighton.

Jacob Scarff was also in double figures against Freedom with 12 points.