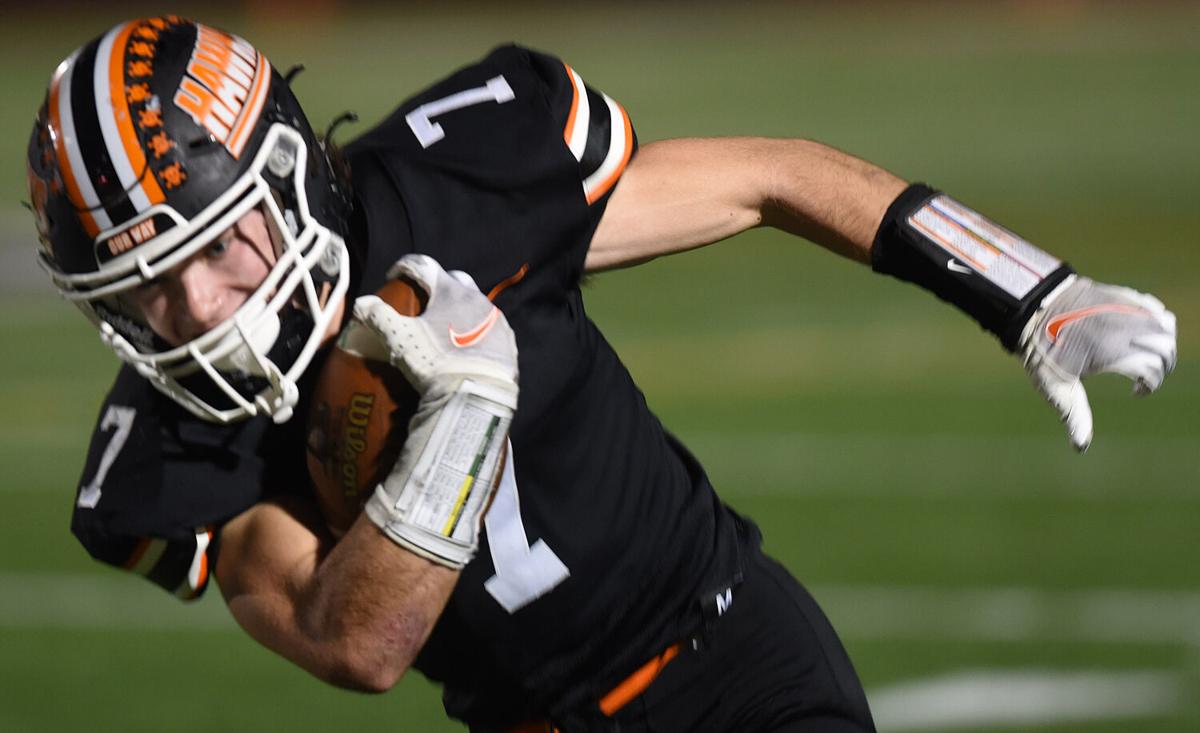 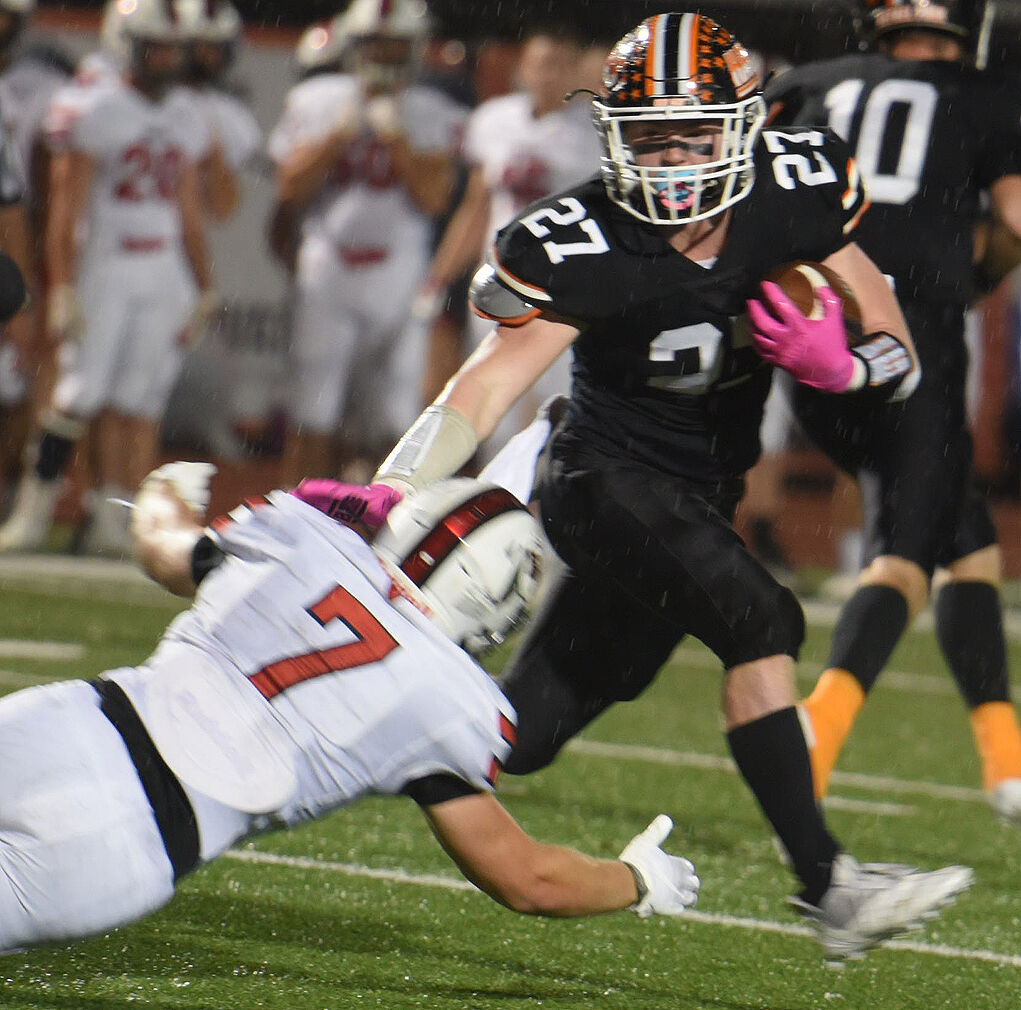 Bethel Park's Troy Volpatti shakes off a tackle attempts by Peters Township's Nico Pate during the Black Hawks' 38-8 victory over the Indians. 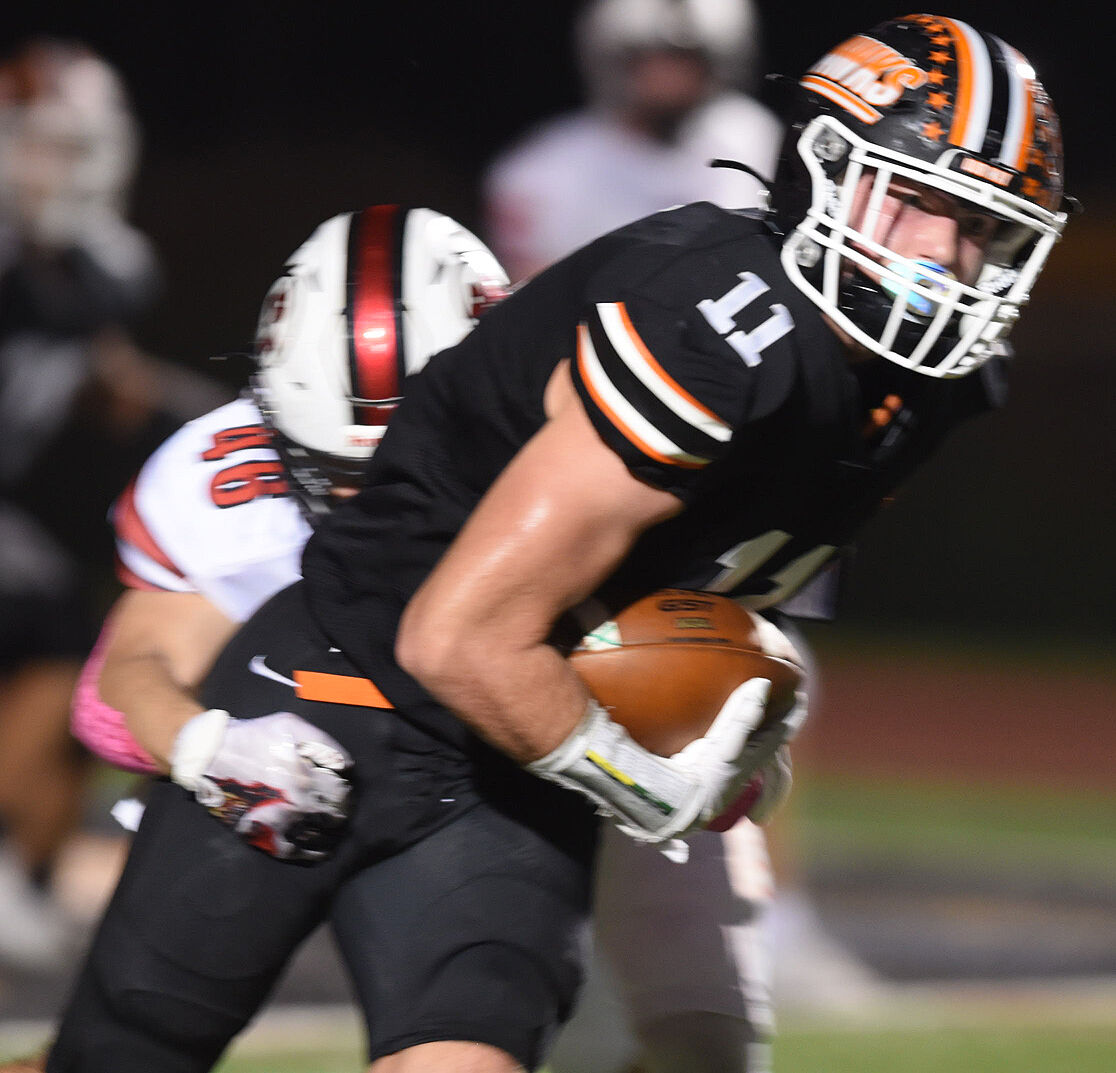 Bethel Park's Aidan Currie picks up some extra yardage before being dragged down by Peters Township's Carson McCoy. 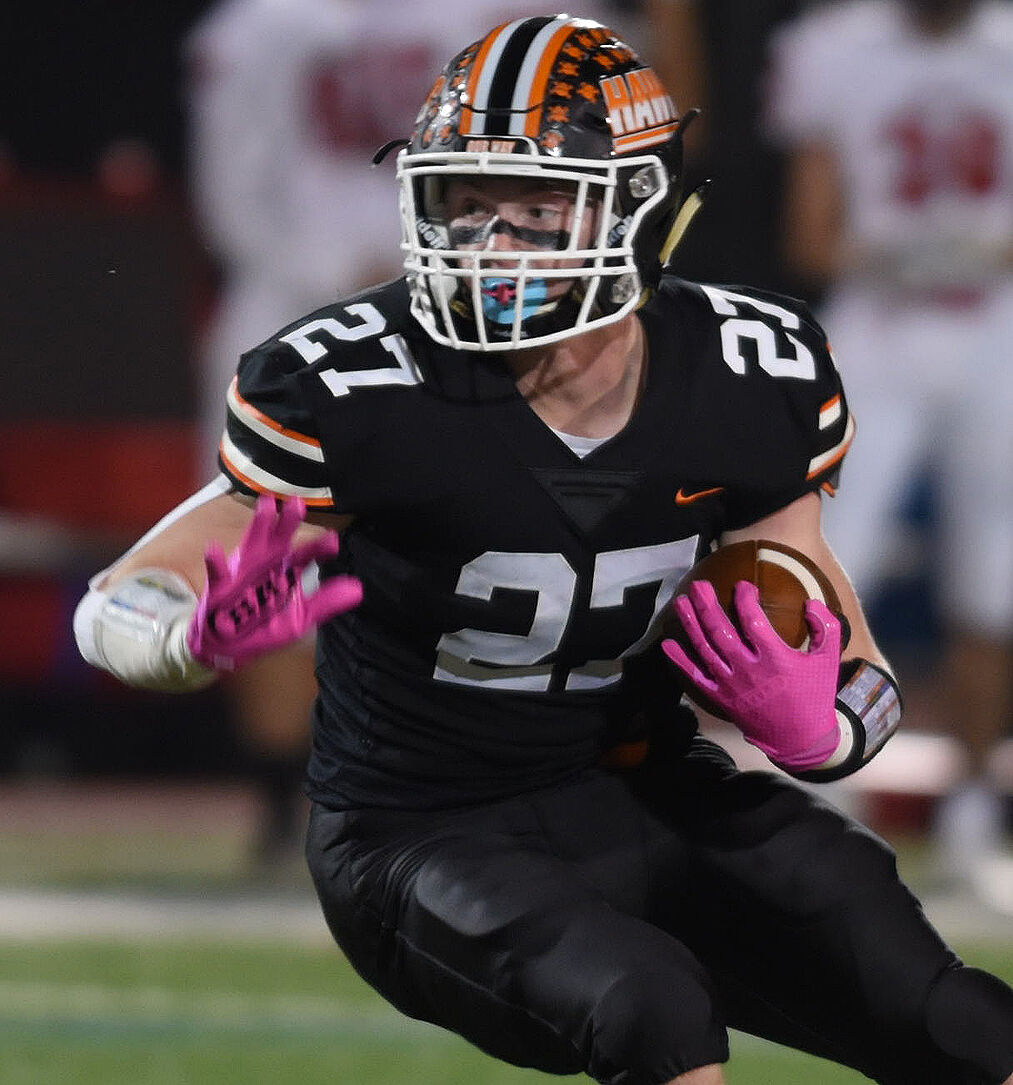 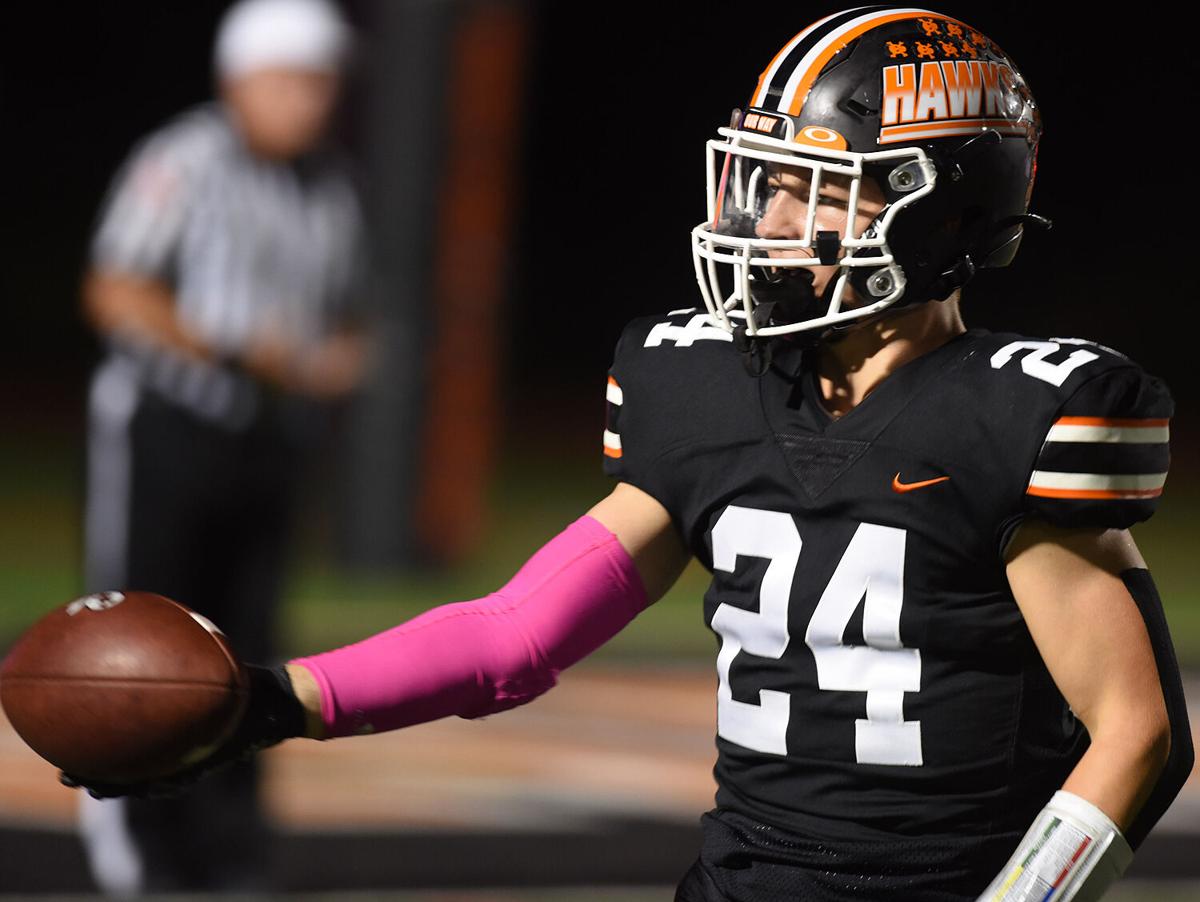 Bethel Park's Austin Caye recovered a fumble that led to a score during the Black Hawks' 38-8 win over Peters Township.

Bethel Park's Troy Volpatti shakes off a tackle attempts by Peters Township's Nico Pate during the Black Hawks' 38-8 victory over the Indians.

Bethel Park's Aidan Currie picks up some extra yardage before being dragged down by Peters Township's Carson McCoy.

Bethel Park's Austin Caye recovered a fumble that led to a score during the Black Hawks' 38-8 win over Peters Township.

“Our bus was pelted with hot dogs on the way into the stadium by a group of tailgaters. Fortunately my window was up,” said USC coach Mike Junko. “Their fans are pretty passionate over there.”

The Black Hawks will be fired up when they entertain the Panthers at 7 p.m. Oct. 29 in their regular season finale.

The triumph was BP’s best performance of the season and prepared the Hawks for what’s in store against the Panthers.

“I think the Peters game was our best but we still have a lot upon which we can improve,” Bethel Park head coach Brian DeLallo said. “We need to be more disciplined because USC has tough kids and they are well-coached.

“Mike (Junko) might be the best playcaller in the WPIAL,” he added. “I spent a lot of time breaking them down this offseason, and he does some really smart things with formations, tempo and play selection. Add their new Wildcat dimension to it, and it’s a lot of preparation. We have to be able to get lined up and disguise our blitzes and coverages. If they know what we’re doing, they will make us pay.”

“Defensively they are anchored by the solid play of their linebacking core and their secondary is one of the most skilled groups we have seen all year,” Junko said

“Moul is a throwback linebacker,” he continued. “He plays the game with great intensity and you need to always be aware of where he is on the field. They have done a great job in their scheme of freeing him up to make plays.”

BP made the plays offensively by utilizing its one-two punch of Max Blanc at quarterback and Troy Volpatti at tailback.

Volpatti rushed for 101 yards and two scores of 3 and 32 yards on 19 carries against Peters Township. He leads Class 5A with 15 touchdowns.

A Youngstown State commit, Blanc completed 10 of 19 passes for 106 yards. He hooked up with Jack Kirchner for a 24-yard scoring strike and added a one-yard sneak into the end zone.

Gody Geddes contributed the extra points and tacked on a 38-yard field goal.

“Their run game has been dominant at times this year. Their quarterback is also a Division I talent that has a firm grasp on their system. This has made their offense a very balanced attack.”

USC struggled offensively in its 16-13 loss to No. 1-ranked Moon.

The Panthers managed two field goals, measuring 42 and 31 yards, from Bennett Henderson. Nick Debrubeis recovered a fumble at the 2-yard-line and ran into the end zone on USC’s opening possession.

Defensively, first-year player Tim Speer made a number of key plays in the secondary for the Panthers.

“Even though we didn’t come out on top, I feel like we took another positive step forward as a football team,” Junko said of the Moon loss.

Junko and DeLallo expect the USC-BP battle to be typical of past affairs.

“We anticipate a close game that will be decided in the fourth quarter, which is how just about every game in our league and in this rivalry seems to go,” DeLallo said.

“In order for a successful result, you have to eliminate turnovers, no penalties and don’t give up big plays. That’s the formula.”

The recipe has worked for the Black Hawks and that concerns the Panthers.

“They do a great job of taking care of the football and they have been able to establish a solid run game that limits their opponents’ offensive opportunities. We have to get off the field on third down and control the line of scrimmage to have success,” Junko said.

Mt. Lebanon looks to put the exclamation point on its most successful regular season in six years when the Blue Devils visit Baldwin at 7 p.m. Oct. 29 in their Quad County Conference football finale.

The WPIAL playoffs are scheduled to start Nov. 5 with the top five teams in Class 6A.

That game ended too late to be included in this edition.

The Blue Devils last started a season 7-0 in 2015 before losing to Woodland Hills. They finished 9-2 after losing to Pine-Richland in the quarterfinals of the WPIAL Quad-A playoffs.

In the Highlanders, the Blue Devils face the same challenges they encountered when they beat Norwin, 35-7.

Coming off a resounding 35-17 win against Central Catholic, Lebo struggled to find its footing against the winless Knights. The game was deadlocked, 7-7, at halftime.

Alex Tecza rushed for back-to-back scores of five and 34 yards to vault Lebo into the second-half lead before Eli Heidenreich caught a 77-yard touchdown pass before Joey Daniels hauled in a 25-yard scoring strike.

Owen Halter recovered a fumble in the end zone for Lebo’s final score.

Daniels ranks among the WPIAL leaders in passing with 95 completions for 12 scores and 1,159 yards.

Before facing West Allegheny on Oct. 22, the Indians suffered a 38-8 defeat to Bethel Park.

In the loss, Sam Miller completed nine passes for 127 yards and a 10-yard scoring strike to Carter Shanafelt. Miller also rushed for 103 yards.

Before tackling Upper St. Clair Oct. 22, the Lions dropped a 28-0 decision to West-A.

Anthony Mackey completed four passes for 110 yards and scoring strikes of 56 yards to Abraham Ibrahim and four yards to Austin Stein before leaving the game with an injury.

Ibrahim had five catches in the game for 79 yards. He also caught a seven-yard touchdown pass from Gavin Owens, who rushed for the Colts’ final score on a five-yard run.