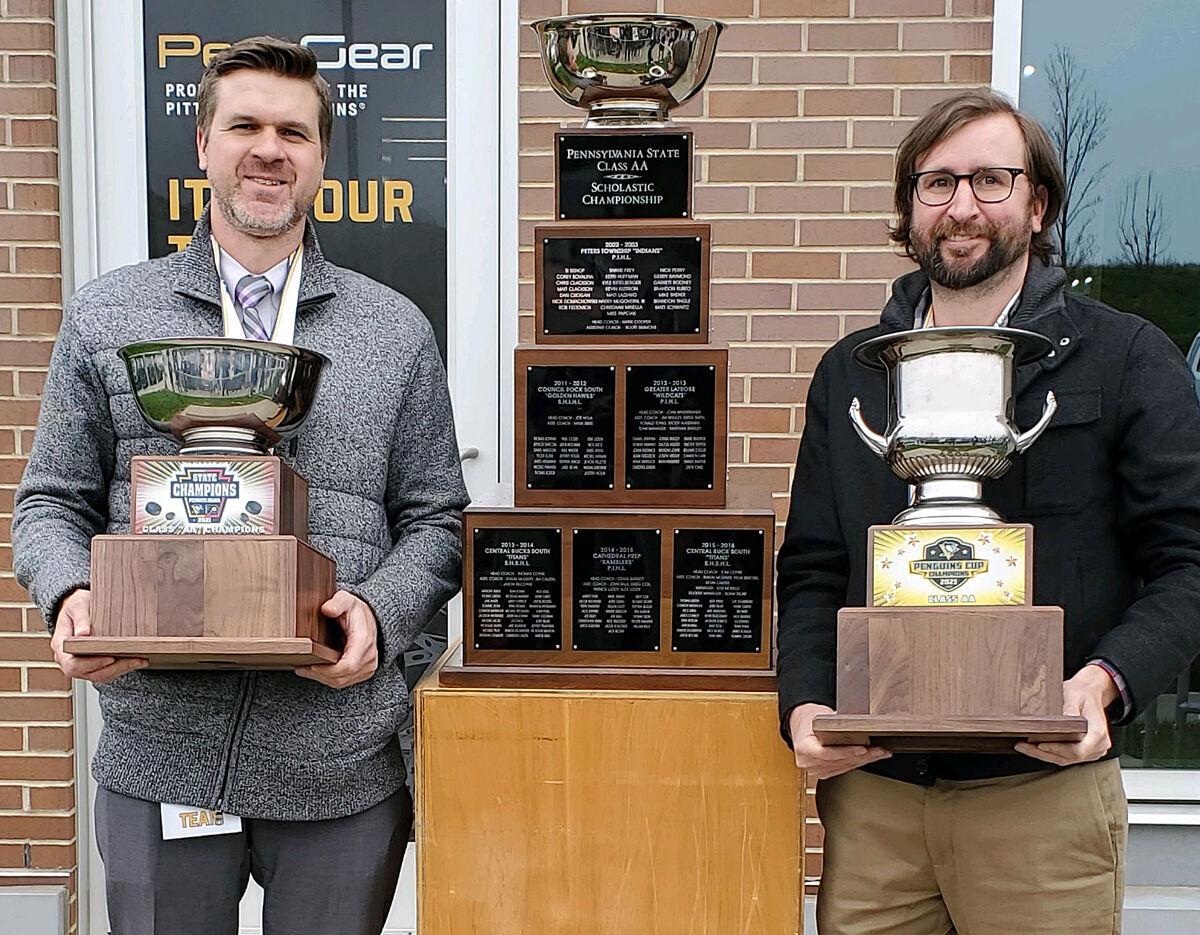 Baldwin hockey head coach Justin Glock, left, and his assistant coach Rob Farmerie, who are both Bethel Park graduates, pose with the hardware they helped the Highlanders capture this season. Baldwin won the Penguins Cup as well as the Pennsylvania State Class AA championship title. 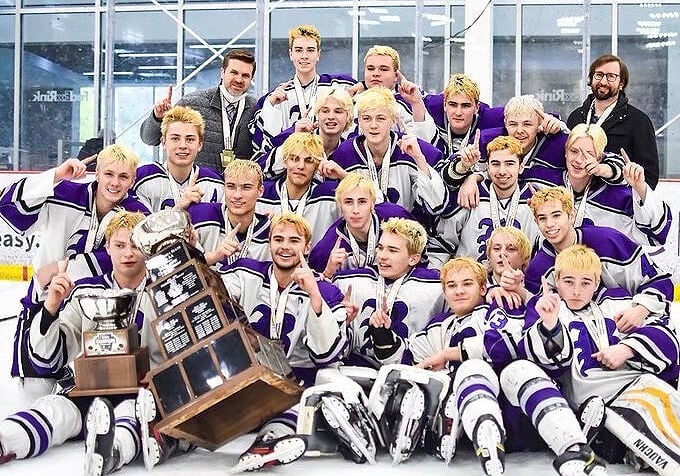 Baldwin defeated Haverford to win the Class 2A Pennsylvania Cup in high school hockey this season.

Bethel Park’s Justin Glock, back row at left, coached Baldwin to the Penguins Cup and Pennsylvania Cup in high school hockey this season.

Baldwin hockey head coach Justin Glock, left, and his assistant coach Rob Farmerie, who are both Bethel Park graduates, pose with the hardware they helped the Highlanders capture this season. Baldwin won the Penguins Cup as well as the Pennsylvania State Class AA championship title.

Baldwin defeated Haverford to win the Class 2A Pennsylvania Cup in high school hockey this season.

Bethel Park’s Justin Glock, back row at left, coached Baldwin to the Penguins Cup and Pennsylvania Cup in high school hockey this season.

Glock, 37, coached Baldwin to it first Pennsylvania Cup since 1988 on April 24 as the Highlanders defeated Haverford 4-1 at the UPMC-Lemieux Sports Complex.

Glock said he ranks his championships won as a player and coach as “equal.” He said the most recent achievements, however, came at a greater cost.

Glock recalled his carefree glory days on the ice. He scored 50 points as a junior and nearly as many as a senior on his way to being named The Almanac MVP in consecutive seasons as well as receiving Stellar 6 accolades.

“As a player, you are on the ice playing the game,” he said. “You can score a goal and have a true impact on the outcome of a game.”

As a coach, Glock said his responsibilities shifted to being concerned about bringing together the “20-plus players” on his roster to be successful.

When that happens, “it’s super gratifying,” he said.

“To bring these kids together and see all of them accomplish one big goal like winning the state championship is rewarding — the ultimate in a coach’s career,” said Glock, who played a year with the Lumberjacks in the Cleveland Suburban Hockey League before matriculating to to the University of Pittsburgh.

Glock spent four seasons as head coach of Upper St. Clair’s hockey team after serving as an assistant and junior varsity head coach in the Panthers’ program. He has now completed his fifth year at Baldwin.

Glock said because he had “good memories” of his scholastic playing days, he was able to relate to his current players. He said he was able to apply the strategic things he has acquired from a lifetime in hockey to get his message across and gain the “attention” of his players.

“At their age, I thought I knew everything too and I thought I was indestructible but I am wiser with age,” he said. “I’ve taken from my experiences and have tried to use them with my players.”

Not until the Highlanders got closer to the state championship game did Glock relate those playoff experiences.

“I told them how rare and special an opportunity it was. You never know if you’ll get back there so cherish the opportunity,” he recalled telling his players. “There was a lot of celebration after winning the PIHL, but I reminded the players the ultimate goal was the state championship. Nobody could take that away from them.”

COVID-19 took title bids away from Baldwin in 2020. The Highlanders had reached the Penguins Cup final, but the championship game against Latrobe was postponed and the season was eventually canceled.

“When I played at Bethel, our sophomore year, we were naive,” Glock said. “We had a good team, but we had no idea we would win a state championship. But Baldwin had a lot or returners and state was the goal last year. We just never fathomed a pandemic.

“Last year and this year, I truly believed if they listened, worked hard and put egos aside we had what it took to go all the way, win a state championship,” he added. “If we were clear-headed and focused, this team had a great opportunity.”

The Highlanders had no easy road to their titles.

Baldwin defeated Penn-Trafford 4-1 in its first playoff game despite being deadlocked heading into the third period.

The Highlanders then knocked off Thomas Jefferson 5-2 in the semifinals before blanking Franklin Regional 2-0 for the championship.

Glock said all the games were equally important, but the TJ contest mattered most for many reasons. The Jaguars were beating teams convincingly and had won 16 of their last 17 games.

“They were a very talented team, but we wanted to do something different against them to throw them off their game,” Glock said. “We needed to try and surprise teams and catch them off guard in the playoffs and the players got behind the plan. We didn’t have a lot of time to implement it, maybe one practice, but it was a testament to them and their ability to adapt.

“The players buying into what we were telling and preaching to them provided a huge momentum swing for us. For the kids to believe in what we do and to be able to change and all get on board showed what can happen when we all believe. We can be successful.”

In the process, Glock discovered he could be successful at a program Bethel Park used to face on a regular basis. He said the transition was not hard at all even though the players were aware of the teams for which he previously coached and played.

“When I first got here, I just tried to gain the respect of everyone. We never brought up what I had done personally,” he said. “I have coached so many great groups of kids and have worked with some great parents that I have fallen in love with the community and the people.”

Glock said he is “extremely happy” to be coaching the Highlanders.

“They have adopted me and I’m a part of Baldwin now,” he said. “I’m putting all my efforts there. Right now, I’m enjoying what we accomplished and I’m looking to continue moving the program forward.

“I’m loving coaching and hockey as much as I ever did,” he added. “I’ll see where it goes from here.”