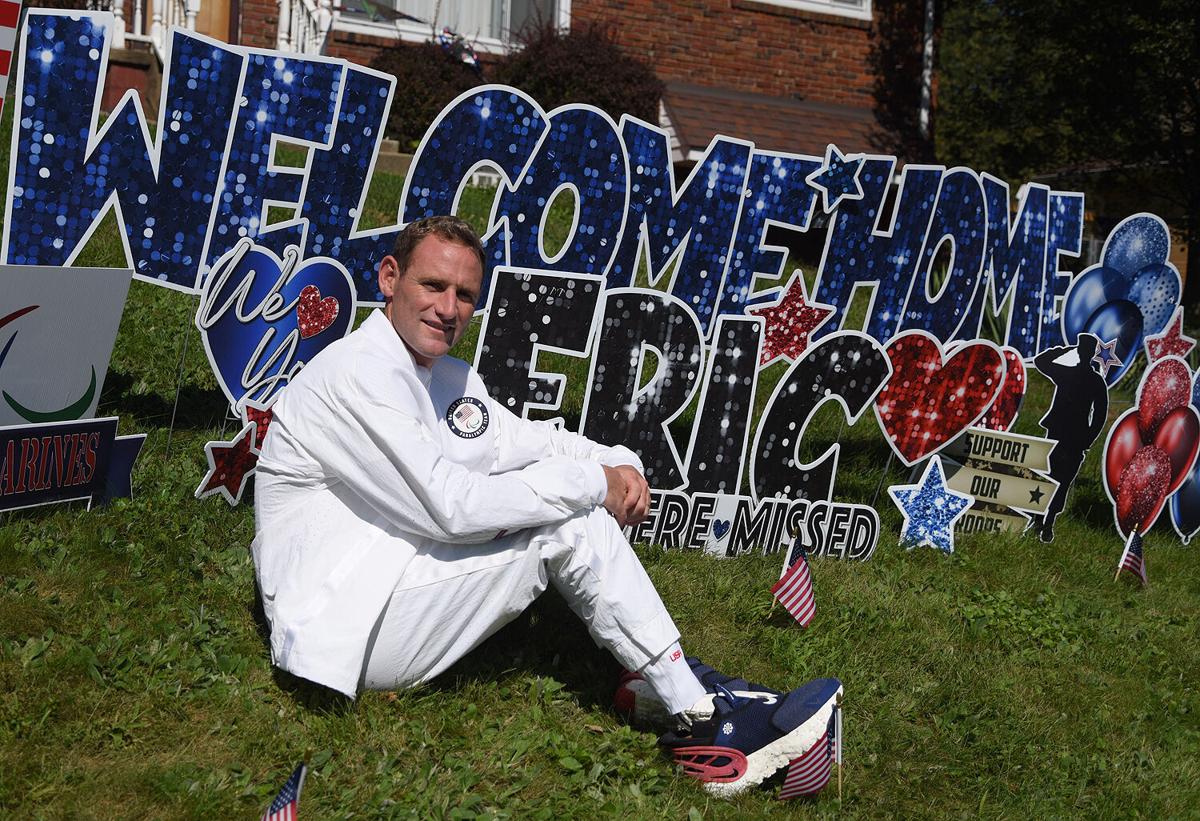 Eric McElvenny was welcomed home after his sixth-place showing in the triathlon during the Paralympics Games held recently in Tokyo. 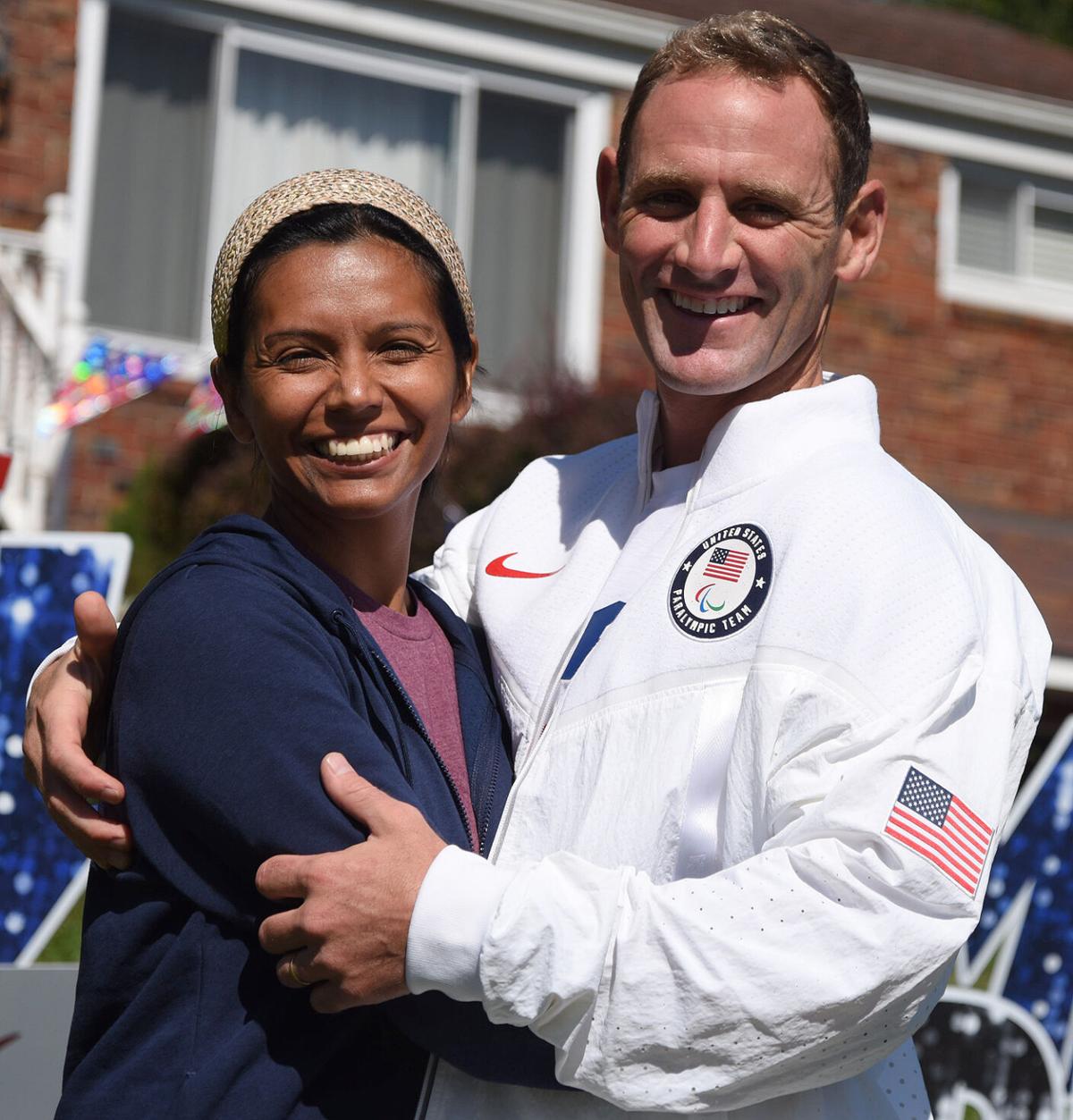 Eric McElvenny gets a hug from his wife, Rachel, after competing in the Paralympic Games held in Tokyo. 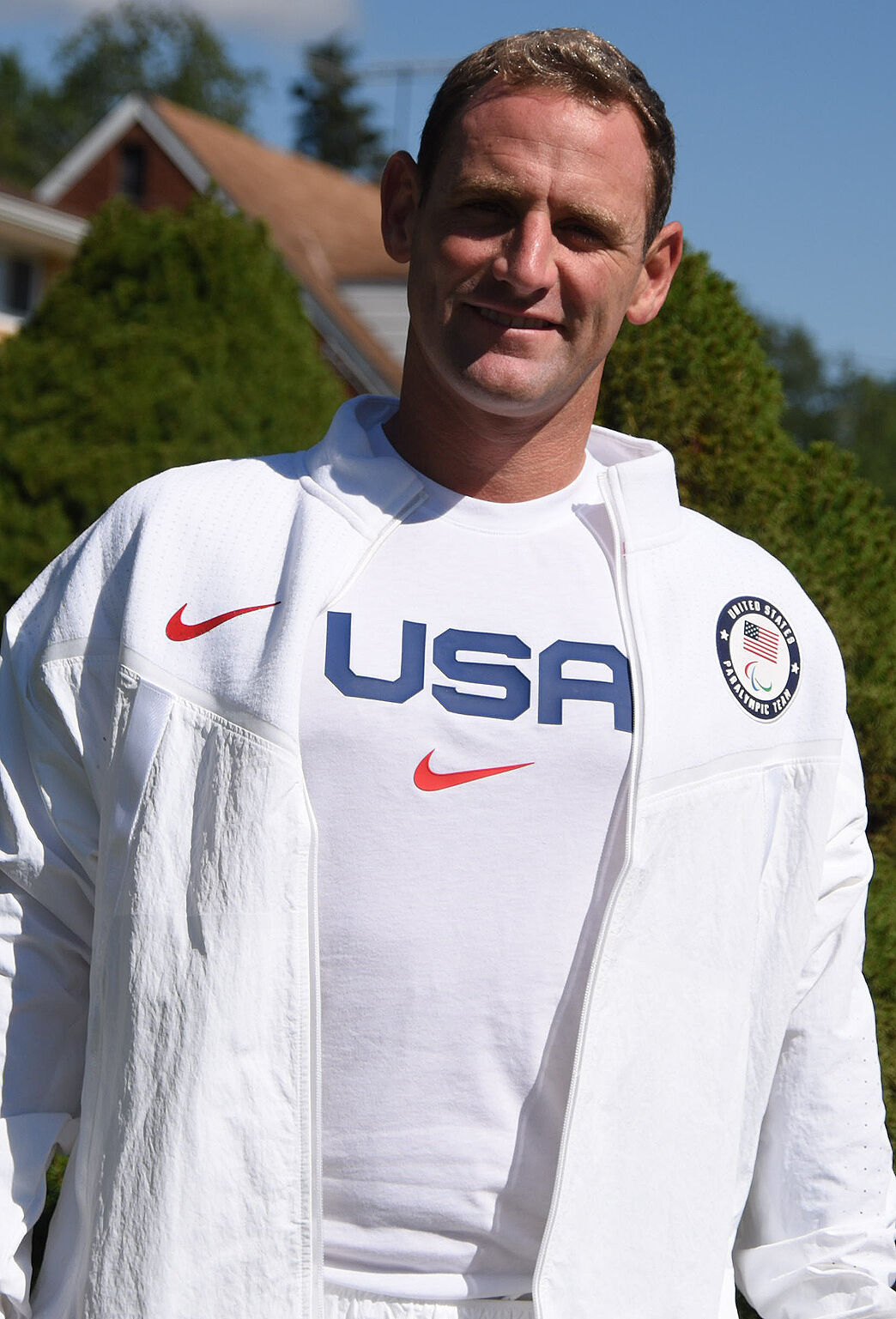 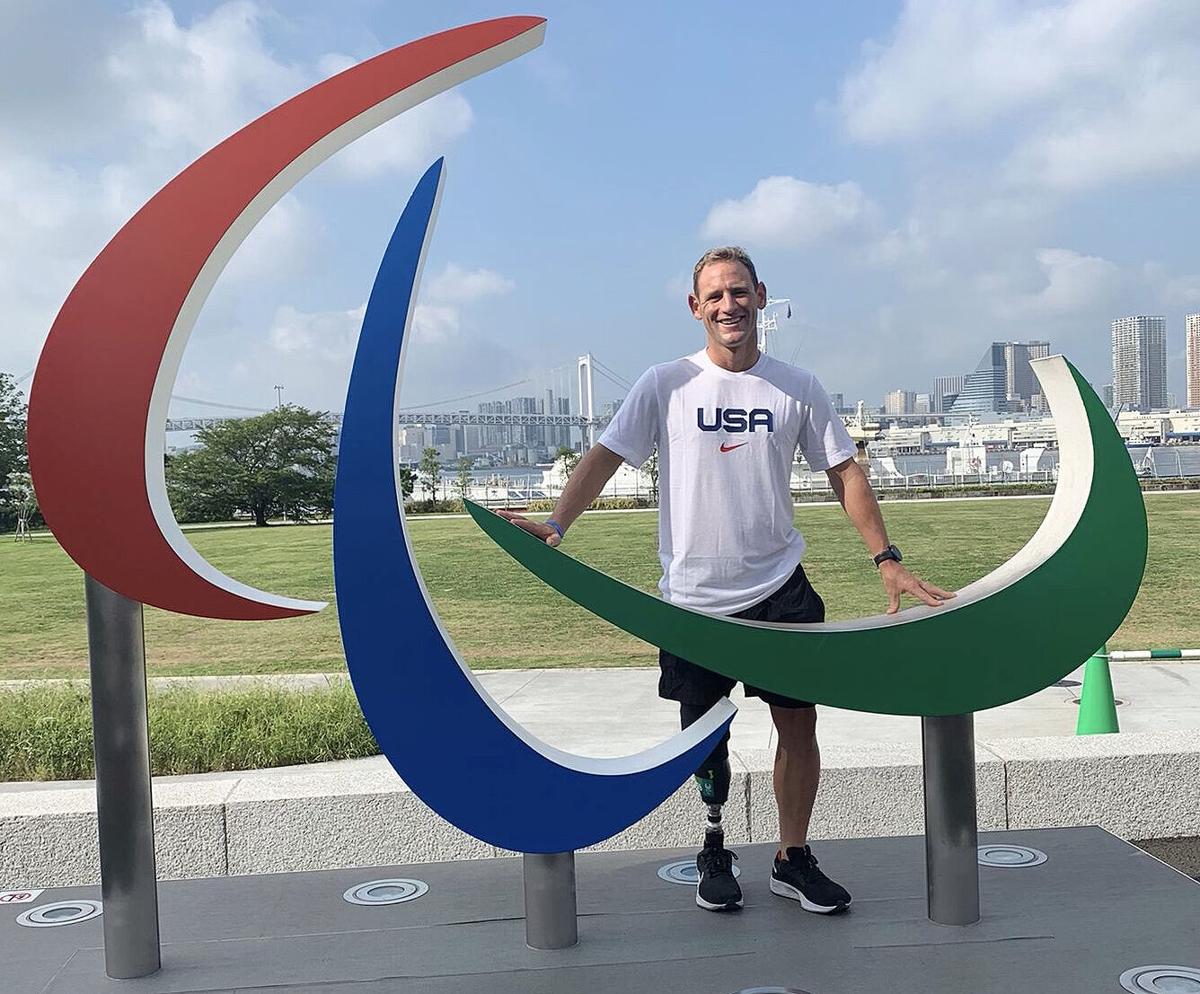 Eric McElvenny poses near one of the figures erected in Tokyo. The Bethel Park resident and Belle Vernon graduate finished sixth in the triathlon during the Paralympic Games. 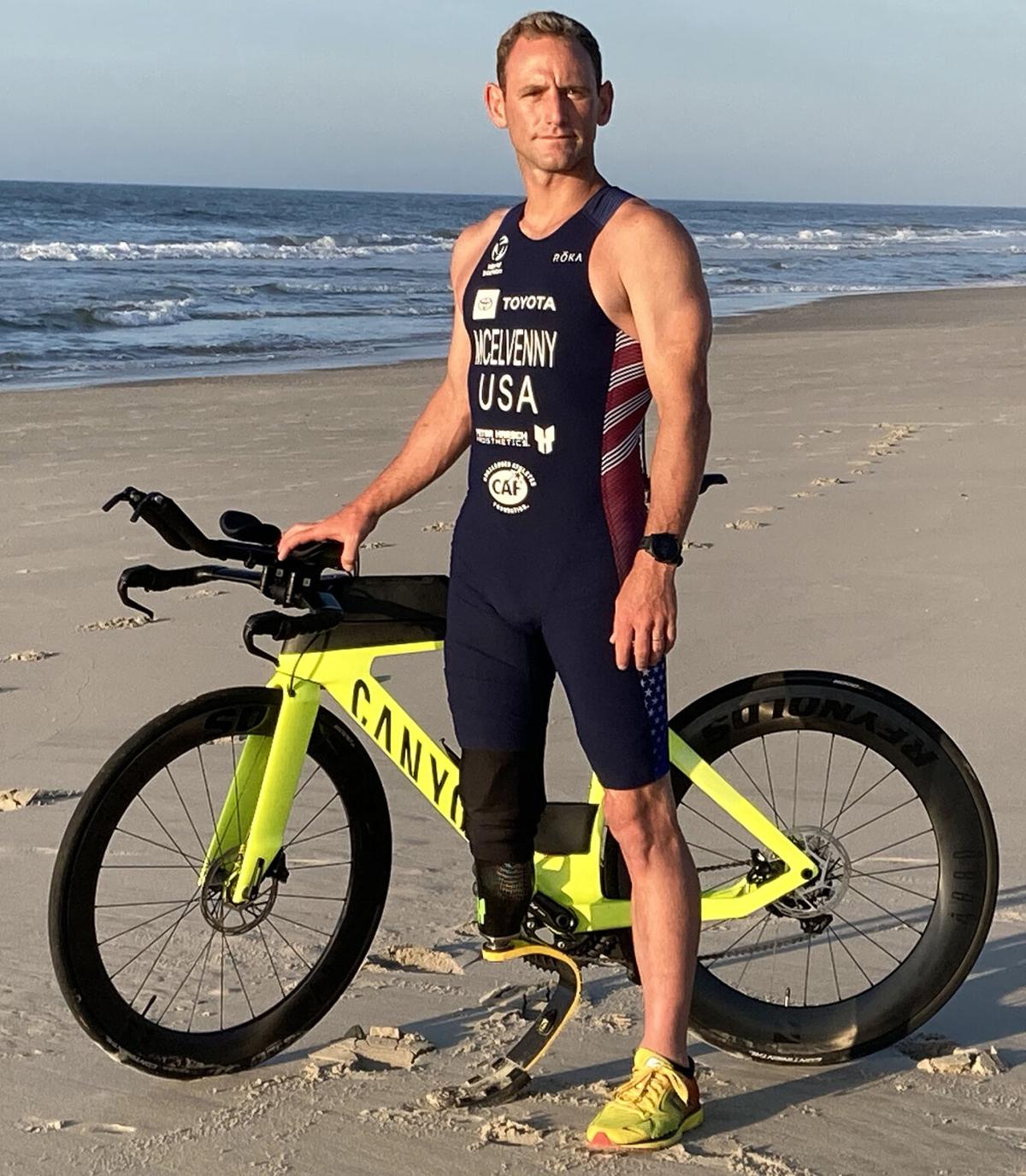 Eric McElvenny poses on the beach with his bike during a training session in preparation for the Paralympic Games held recently in Tokyo.

Eric McElvenny was welcomed home after his sixth-place showing in the triathlon during the Paralympics Games held recently in Tokyo.

Eric McElvenny gets a hug from his wife, Rachel, after competing in the Paralympic Games held in Tokyo.

Eric McElvenny poses near one of the figures erected in Tokyo. The Bethel Park resident and Belle Vernon graduate finished sixth in the triathlon during the Paralympic Games.

Eric McElvenny poses on the beach with his bike during a training session in preparation for the Paralympic Games held recently in Tokyo.

At nearly midnight, Eric McElvenny thought he would silently slip home after traveling from Tokyo, Japan, where he recently competed in 2021 Paralympic Games.

Instead, the Bethel Park resident and Belle Vernon graduate received a hero's welcome. Congratulatory signs lined the lawns and tiny American flags were unfurled along the curbs on the street where he lives.

McElvenny took sixth place in the PTS4 Triathlon. He also was the first American to cross the finish line in the event.

“We are so proud of Eric as a neighbor,” said Shawn McCaffrey. “He is an inspiration to all of us. Everything that he has done. He has worked very hard to recover from his injury and now he is an Olympian.”

A U.S. Marine veteran, McElvenny lost his lower right leg after stepping on an IED during a deployment in Afghanistan in 2010. He said he did not realize how much support he had from the community.

“It’s been so amazing,” McElvenny said. “I feel loved and that people care about me. It’s so cool to represent the United States of America, my community and my neighbors.”

For McElvenny the experience has been a dream come true. As a kid, he said he watched the Olympic Games and envisioned some day being part of the event and donning the USA gear.

“When it really happens, it’s emotional. Hard to put into words,” he said.

McElvenny left for the Paralympic Games in mid-summer. From July 23-Aug. 12, his team trained in Colorado Springs, Colo. From Aug. 12-21, the team acclimatized in Hawaii to prepare for the heat and humidity that awaited in Tokyo. From Aug. 22-Sept. 4, McElvenny prepared for competition while he also participated in events. He attended the opening ceremonies because they were far enough away from his race.

“It was great to see all the countries and the athletes and though it was a long wait because the USA was the third to last to be announced, just entering the stadium gave you chills," McElvenny said of the opening ceremonies.

Because of the COVID-19 pandemic, no fans were admitted. Only volunteers, athletes, the performers and officials attended the event.

“There were USA chants and such positive energy,” McElvenny said. “You could only imagine what it would have been like if the stadium were packed.”

A veteran of many triathlons and Ironman competitions, McElvenny envisioned his race would be familiar as well. He would survive a 750-meter swim, cycle 20 kilometers and run 3.1 miles within a 1:06:28 timespan.

“When the gun goes off, you stop being nervous and the chaos ensues,” McElvenny said.

McElvenny said the first 100 meters of the swim is all out because athletes are trying to gain position and execute their game plans. McElvenny found himself first among a small group of racers behind the lead pack.

“Swimming is not my best but I have gotten better at it," he said. "I knew I wasn’t getting out of the water first but I got into a groove.”

“As practiced,” he said.

McElvenney put on his prosthetic leg and mounted his bike.

“It was a fast transition and I was very happy with getting on the bike without issues,” he said. “The bike went alright. I was doing what I wanted to do, felt good and was making good times but at the same time, because it was a four-loop ride, I could see the guys ahead of me.

"In the moment it’s frustrating,"he added, "because you are asking yourself how are these guys beating me when I’m executing my plan.”

McElvenny did not make up ground on the bike. He maintained his position as he headed into the second transition. There he changed into a leg, fitted with a blade for running.

McElvenny passed a few competitors and avoided being passed himself as he reached to the finish line.

“It was definitely memorable,” McElvenny said. “At that point, I enjoyed it. I ran well. I looked up and saw myself on the screen so I savored the moment. Even though no part of me wanted to smile, I put a smile on my face for the people who supported me so much because they would be seeing me on television.”

McElvenny's teammate and best friend, Jamie Brown, finished in ninth place. He said Brown was one of the reasons he want to come to Tokyo.

“I wanted both of us to be on the podium,” McElvenny said. “We gave it our all and we knew that one of us might finish ahead of the other.”

McElvenny’s rise in triathlons has been swift. In May, he was ranked 16th but jumped up 10 spots in the world.

“Although I was disappointed not to secure a medal for my team and country, I’m proud of the and progress I made in a few months and the accomplishment because this was my first triathlon in a Paralympics," he said.

McElvenny has already commenced preparations for the 2024 Paralympics in Paris. After competing in an Ironman held in St. George, McElvenny will participate in the World Championship Para Triathlon World Championships to be held Nov. 5 in Abu Dhabi.

“It’s not much of a break but if I want to go to Paris and medal, I need to start rolling with the races," he said. "Yes, I’m sad the Paralympics are over, but luck for me, I don’t have to take a break. It’s always what’s next for me.”

While Eric McElvenny was competing at the Paralympic Games in Tokyo, he watched in anguish as Afghanistan fell to the Taliban.

“It was hard watching things unfold,” he said.

“Here I was getting ready to compete in international games and there still were men and women putting their lives on the line in service. It got more real when the bombing occurred and killed 12 marines and a sailor. That hit me pretty hard.”

On McElvenny’s third deployment to Afghanistan he lost his lower right leg, amputated four inches below his knee, when he stepped on an IED. He suffered the injury in 2010.

“I did not know how this (war) was going to end but I am okay with this. I have no regrets. Obviously I did not want to lose a limb but things happen in life that you can’t control and I can’t change (losing my leg).

“I wouldn’t want to live through that day again but then again I was able to move through it. It created an opportunity I would not have had otherwise.”

McElvenny would not exchange his experience in Afghanistan. When he thinks of the country and his time there he says he things about those he fought alongside of as well as the children he had gotten to know.

“I worked directly with the military, villagers and kids and my heart and prayers go out to them. It’s a difficult situation. A lot of people have sacrificed for that country.”

McElvenny feels his own sacrifice has been worth it. He says that for 20 years the United States has helped keep the world safe and that’s a big positive.

“I do not look at it as a waste. At the time, the men and women with whom I served had a mission and we performed it to the best of our abilities.

“I’m proud of my service. I would leave the safety of my own country to help a played that needed help.”