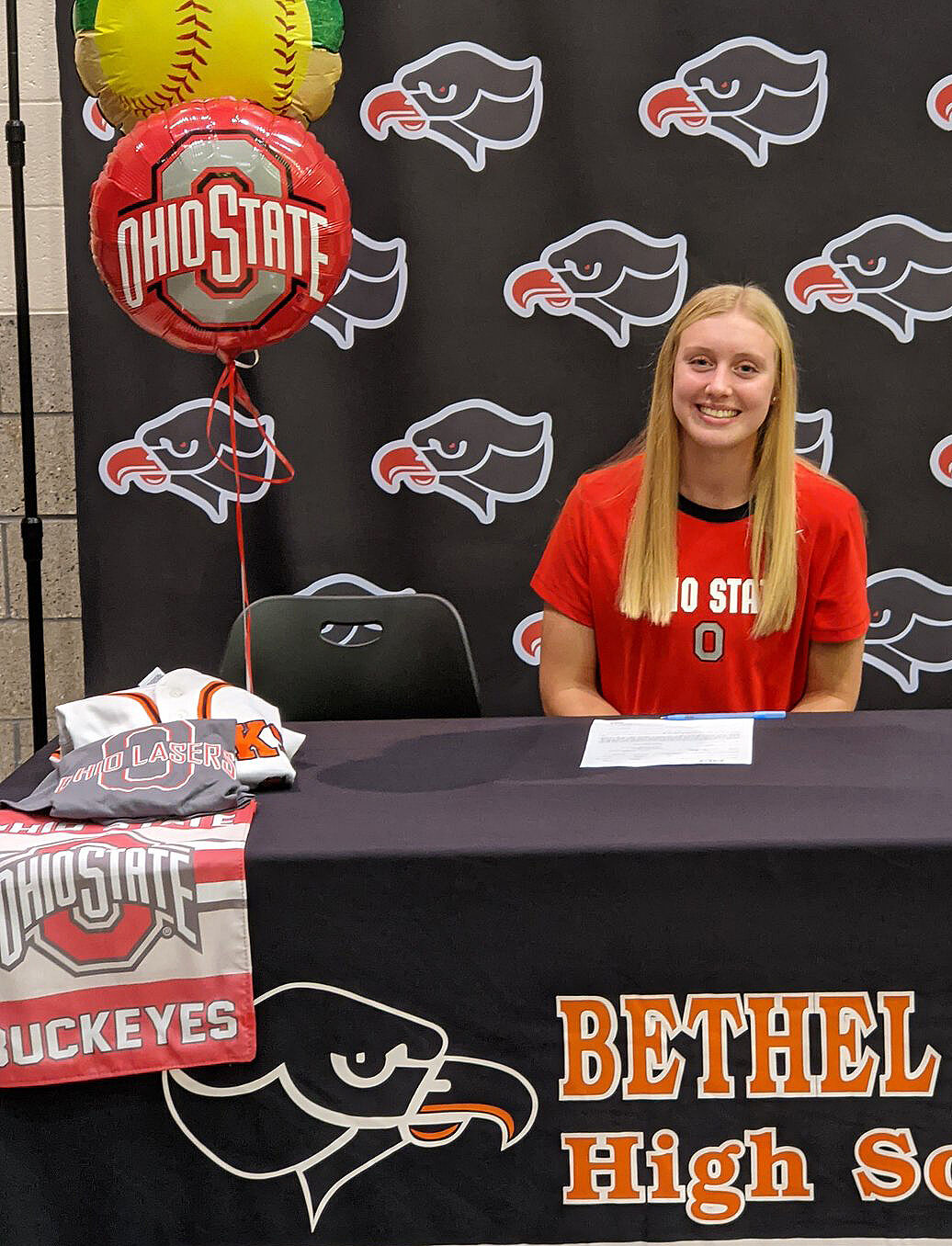 Reagan Milliken made her commitment to Ohio State official when the Bethel Park High School senior signed her National Letter of Intent to play softball for the Buckeyes. 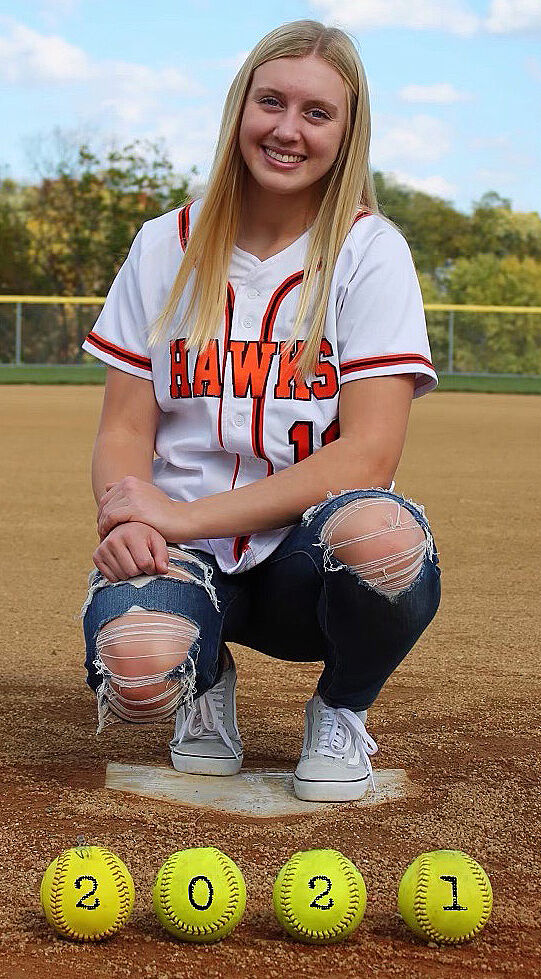 Bethel Park's Reagan Milliken will continue her career at Ohio State University after graduating in 2021.

Reagan Milliken made her commitment to Ohio State official when the Bethel Park High School senior signed her National Letter of Intent to play softball for the Buckeyes.

Bethel Park's Reagan Milliken will continue her career at Ohio State University after graduating in 2021.

Reagan Milliken excels enough in softball and basketball for Bethel Park to have accumulated a number of memorable moments. Her proudest achievement, however, has not occurred on the field or the court.

“Honestly,” she said of committing to play softball at Ohio State University, “signing is the highlight.”

Milliken officially signed a national letter of intent to play for the Buckeyes beginning in 2021.

Ohio State was her only choice.

Since she started playing travel softball for the Ohio Lasers seven years ago, Milliken said she learned a lot about the fan base and culture at the school.

“I knew I really wanted to go there. OSU was my goal. It took a lot of work but it was worth it.”

Milliken began working toward her goal as a 5-year-old playing in a league in Waynesburg, where she resided until eighth grade. Her father, Mike, taught in the Bethel Park School District and served as an assistant varsity football coach. Though he knew little about the sport, he proved instrumental in Milliken’s progression to a Division I recruit.

“My dad has two sides to him. The coaching side and the dad side,” Milliken said. “He’s a great dad. Honestly, he didn’t know much about softball until I started but he learned from other coaches and helped me out a lot with sports in general and softball in particular.”

While basketball is her second sport, the activity has helped Milliken’s softball game. Milliken contributed to the Black Hawks’ 23-3 championship season. BP won a section title, finished runner-up in the WPIAL and advanced to the PIAA quarterfinals before the 2020 campaign was suspended by the COVID-19 pandemic.

“Reagan is such a hardworking kid. She comes early and stays late,” said BP girls basketball coach Jonna Burke. “She’s one of the most physically strong kids I’ve ever worked with. Incredibly coachable, too.”

Milliken, who will again play hoops for the Hawks this winter, said she is keen on the sport because it enables her to “stay in shape” for softball. She said the sport also improves footwork, which she feels is essential for success on the diamond.

However, hitting is Milliken’s forte. She batted .509 as a freshman and .508 as a sophomore. Her junior year was canceled because of the coronavirus.

Additionally, Milliken earned first-team All-WPIAL and second-team All-State recognition in 2019. She was a second-team all-district performer in her first varsity season.

Although she has played the interior spots at second base and shortstop for the Hawks, Milliken was recruited to primarily play first base for the Buckeyes. She can also be utilized at third base.

“She will play the corners for us and add home run power to our lineup,” Sckoenly said. “Reagan has a pure swing, tremendous hand-eye coordination and the ability to hit for power to all fields with confidence. She loves the big moments and has the mentality to make a difference in the game with one swing.”

Milliken works with a personal hitting instructor, Gina Fuchs, a former Pitt assistant who is currently coaching at Baldwin.

“Gina’s helped me a lot but truly the secret to my success has been hard work,” Milliken said. “Hitting a bucket and a half of balls a day or working on the fundamentals like fielding.”

Milliken said she plans to continue down the same path with the Buckeyes.

“Keep working to get better. Watch and practice,” she said.

Milliken’s goals at OSU are similar to her objectives at BP this winter and spring. Milliken hopes to help the Hawks win WPIAL championships in basketball and softball then lead the Buckeyes to the Big 10 championship.

“I’m looking forward to the winter and the spring because I’m hoping we make it back to the WPIAL basketball championships because that was a very cool experience and I’m hoping to help the team in the softball playoffs and win a WPIAL title, too,” she said.

“At OSU, I’m hoping to get to play and help the team make the Big 10 tournament and do well in that and eventually make it to the college World Series. After that though I’m not sure. There are pro leagues but that’s not a top priority.”

Milliken maintains a 4.0 grade point average and is an honors student at Bethel Park. She plans to major in nursing at OSU.

“It’s going to be a big adjustment. It’s always been a balancing act,” she said of the academics and athletics. “But, I’ve learned to push through the tough times and the many obstacles. I think playing very competitive travel softball and having coaches that have prepared me, especially mentally, that I’m going to be ready to handle this.”

Who would play you in a movie: My sister. She knows me best.

Dream destination: Greece. “It looks so nice and pretty.”

People might be surprised to know this about you: I grew up in Waynesburg and lived there until eighth grade when I moved to Bethel Park because my dad taught in the school district.

Person you would like to have dinner with: My mom’s grandma, Margaret Litwinovich. “My gramme and I were real close until she died four years ago.”

Lesson sports has taught you: Never give up on anything. “If you have a bad day, just relax. It will go away. Just come back to it and try again.”

In 15 years, I will be: “Hopefully living in Pittsburgh with a stable job in a hospital.”