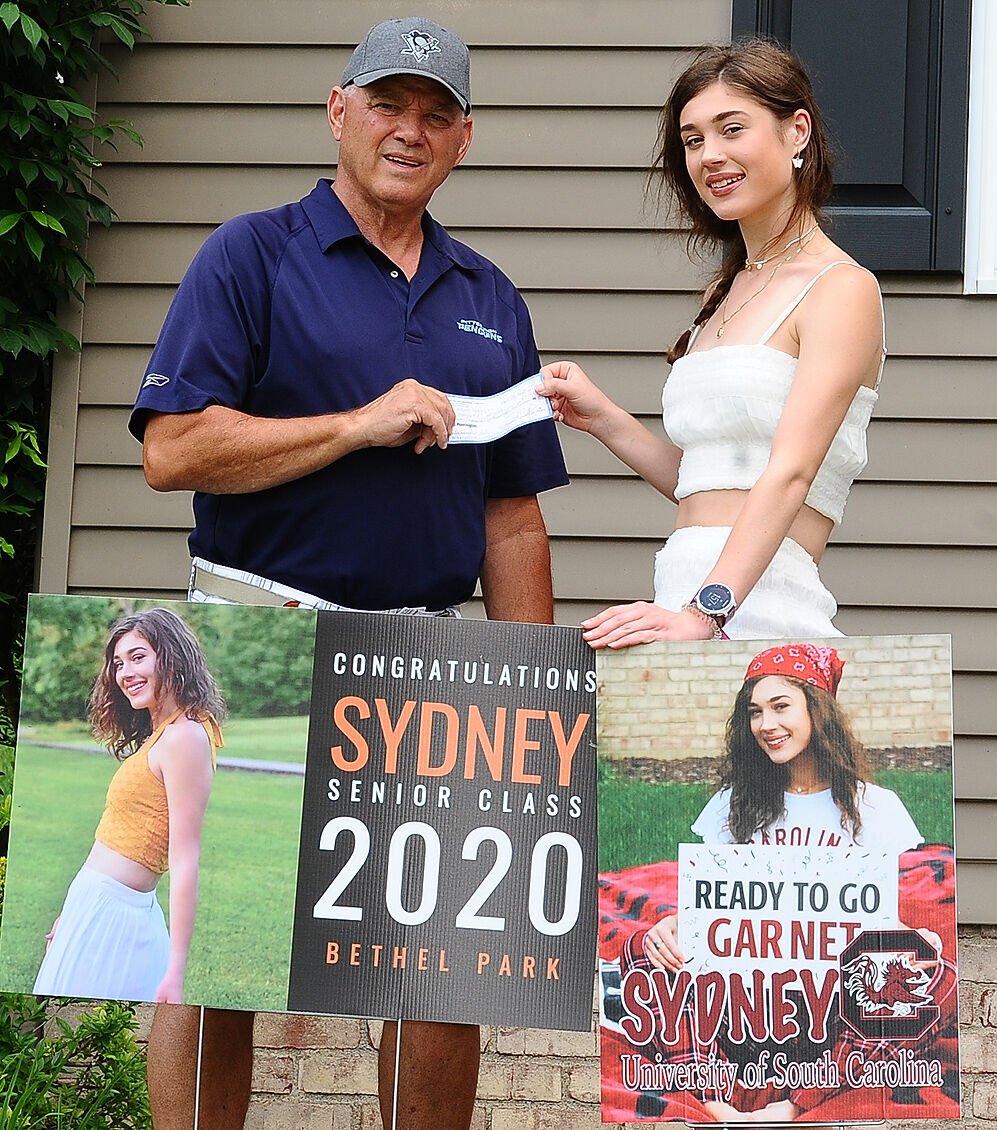 Terry Crump presents Sydney Burns with a check as the recipient of the Ken Waldie Memorial Scholarship. The Bethel Park senior cross country runner will use the funds toward her education at the University of South Carolina. 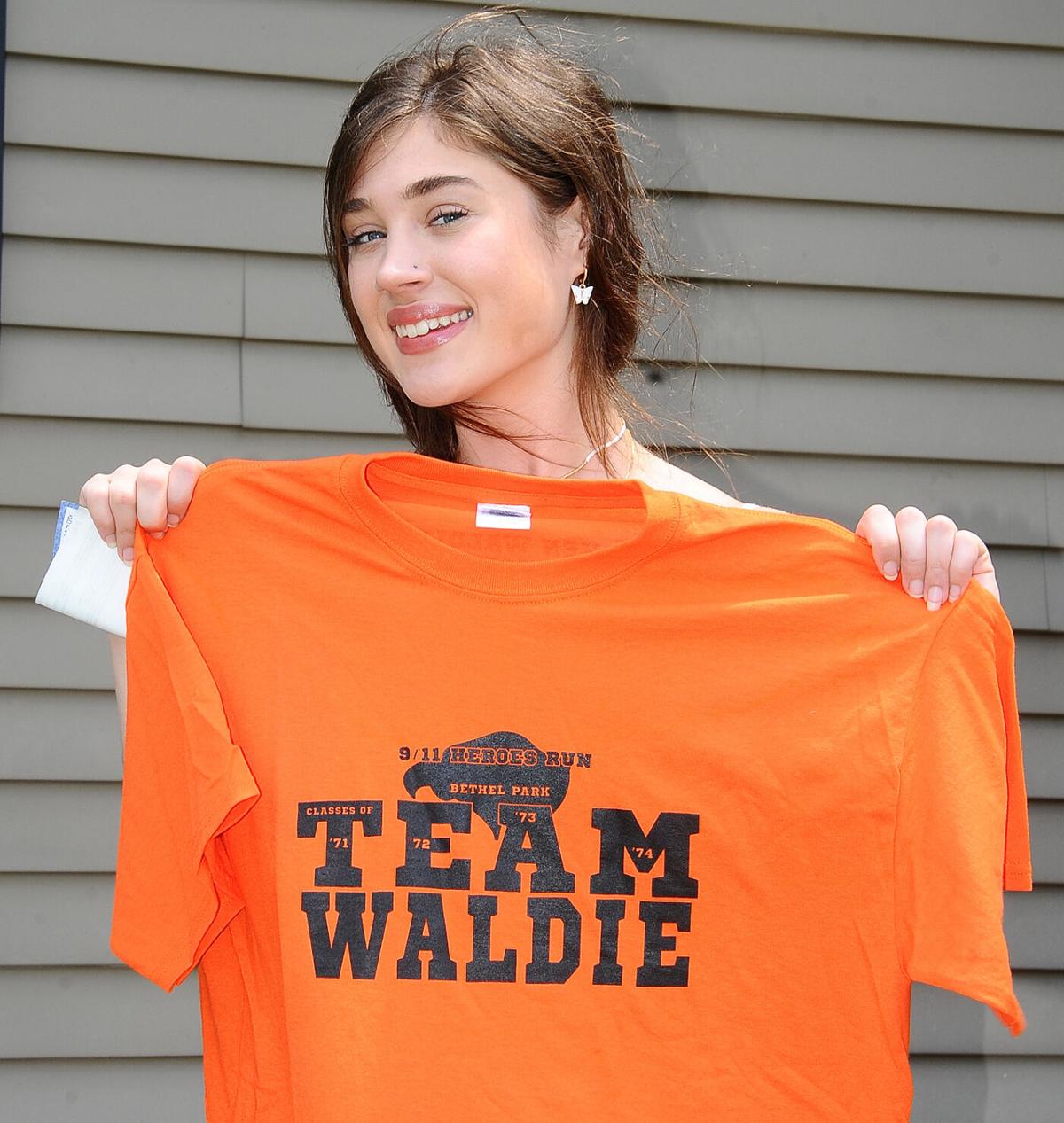 Terry Crump presents Sydney Burns with a check as the recipient of the Ken Waldie Memorial Scholarship. The Bethel Park senior cross country runner will use the funds toward her education at the University of South Carolina.

“I swore I would never run,” said the Bethel Park graduating senior.

Burns had grown weary of comparisons to her mother, Angela, who continues to excel in marathon races.

“People say I look like my mom,” Burns said. “I act like her. So I decided I was going to be different.

“I ended up doing the same thing.”

That’s because Burns learned a valuable lesson regarding loyalty and friendship. The concepts, she said, are reinforced through running.

Before she entered high school and joined the cross country team, Burns said she learned her mother’s friend, Joe, developed a heart issue and was unable to participate in the Pittsburgh half marathon, which they both had entered.

Even though she had never run before, Burns said she “begged” to race in the friend’s place.

“My mom said, ‘what is wrong with you?’ but I answered, ‘please, I want to do it.’ I like to push myself. I’m stubborn that way,” Burns said. “Besides there are free snacks at the end and I didn’t want to see the (race) packet wasted.”

Burns covered the 13.1-mile course in 2 hours, 5 minutes. She earned a medal, which she proudly wore to Independence Middle School the following day.

“I absolutely fell in love with running,” Burns said. “It’s something about feeling so free. It’s so rhythmic and when I’m running all my stress melts away and I can sort through things in life.”

In four years of running cross country for Bethel Park, Burns said she sorted through more things than just “how fast” or “how far” she could go.

While the 18-year-old daughter of William Burns covers a course in 21.03 and has had a nearly top 100 finish in the WPIAL championships, she has settled on important issues like career goals. Burns plans to become a lawyer and advocate for animal rights. She will enroll at University of South Carolina and begin her studies in public relations in the fall. Burns selected USC over Penn State main campus and Virginia Commonwealth University in Richmond.

“I wanted somewhere that was far out of my comfort zone,” Burns said. “I’ll have time to reflect on who I am as a person and how to handle myself and situations. There is no pressure to please or let anyone down. It’s not a short drive home and there are no friends but it’s an opportunity for growth.”

Running has promoted growth in Burns. In fact, her role as captain enabled her to delve into the true meaning of friendship and leadership. The combination led to her winning an $11,000 stipend from the Friends of Waldie. The group established a memorial fund in Ken Waldie’s honor after he died Sept. 11, 2001.

Along with athletics, the scholarship acknowledges excellence in the classroom and the application required a 250-word essay on friendship.

Burns maintained a 4.4 GPA and belonged to National Honor Society. She was the editor of the school’s literary magazine and vice president of the Principal’s Advisory Council. She volunteered at UPMC-Mercy hospital and was team captain of the GOLD Teen Leadership Corps.

Burns used her running experiences to expound on the essay topic. She said running “taught her the value” of having a loyal friend. As a captain, too, she straddled a fine line between encouragement and enforcement.

“True friends are people that take as much joy in your success as you do, even if it means their own failures. They are not envious or spiteful. They are uplifting and encouraging, willing to throw their own success away when you are in dire need of assistance,” she wrote.

Burns said running has taught her about “getting back on your feet after you have been thrown down.”

“Running has also taught me patience and reliance,” she said. “You can’t get good over night. It takes long run and takes times. Without my teammates believing in me when I didn’t believe in myself also taught me the true meaning of friendship.”

Burns also believes she is connected with Waldie and his friends. She was born three days prior to the 2001 terrorist attacks on the United States.

“How amazing it occurred when I was born,” she said in awe. “It all fell into place. I am honored and thrilled to receive this award. Cross country and the relationships these men have had with each other since high school has taught me so much about friendship.”

Burns said she plans to complete a marathon some day, perhaps Columbia or Pittsburgh while she crusades for furry friends like her deceased dog, Jack, a rescue mix of collie, greyhound and German shepherd.

“Jack was so starved and emaciated when we got him. I’m passionate about animal rights as much as running,” she said. “Running is something I can fall back on through and through. For me, it’s a lifelong thing. I love and enjoy it.”

Book: Catcher’s In the Rye

People might be surprised to know this about you: I used to compete in dressage in horseback riding and I am a vegetarian.

Person with whom you would like to have dinner: President Barack Obama. “I’ve always looked up to him and his family. I admire their work and the roles they have taken on with so much grace and maturity. They improved the world.

Where do you hope to leave your mark: Promoting rights, particularly animal rights.

Ken Walde Memorial Fund, Inc was established by the Friends of Waldie Organization as a tribute to the Bethel Park High School graduate, who was tragically killed on Sept. 11, 2001.

The group consists of classmates Steve McGinnis, Frank DelPercio, Terry Crump and Tom Etzel, To date, Waldie’s classmates have awarded more than $100,000 to distinguished seniors for their college pursuits. Additionally, they have contributed to The Almanac’s Waldie/Shaeffer Scholarship Award from 2002-2017.

Waldie, who was a passenger on American Airlines Flight 11 that struck the first World Trade Center Tower, was a swimmer in high school and at the United States Naval Academy.

In addition to captaining the Black Hawks to their first ever WPIAL title under head coach Pat Campbell, Waldie was a leader outside the pool. He was voted class president each of his four years at the Naval Academy, something that had never been accomplished before at the tradition-rich institution.

After fulfilling his five-year military commitment, Waldie used his mathematics degree to gain employment with Raytheon Corporation. While working, he earned a masters degree and graduated first in his class.

Forty-six at the time of his death, Waldie left behind a wife, Carol, three sons, Andrew, Jeffrey and Jonathan, and a daughter, Meredith, along with a brother, Jack, and three sisters, Jane, Mary Louise and Grace.

Visit: www.forukenny.com for more information on the scholarship or to submit an application for next year’s award.