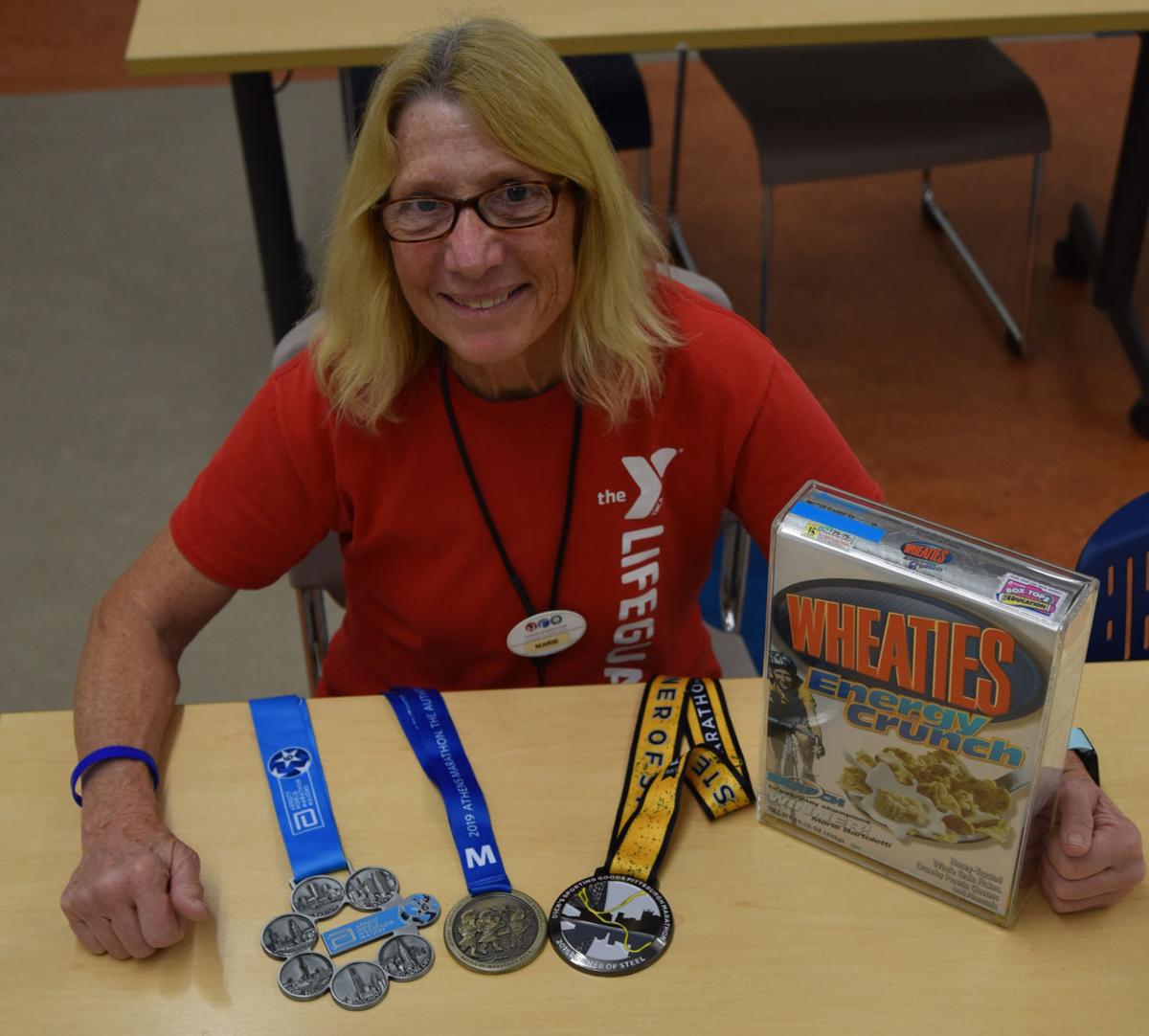 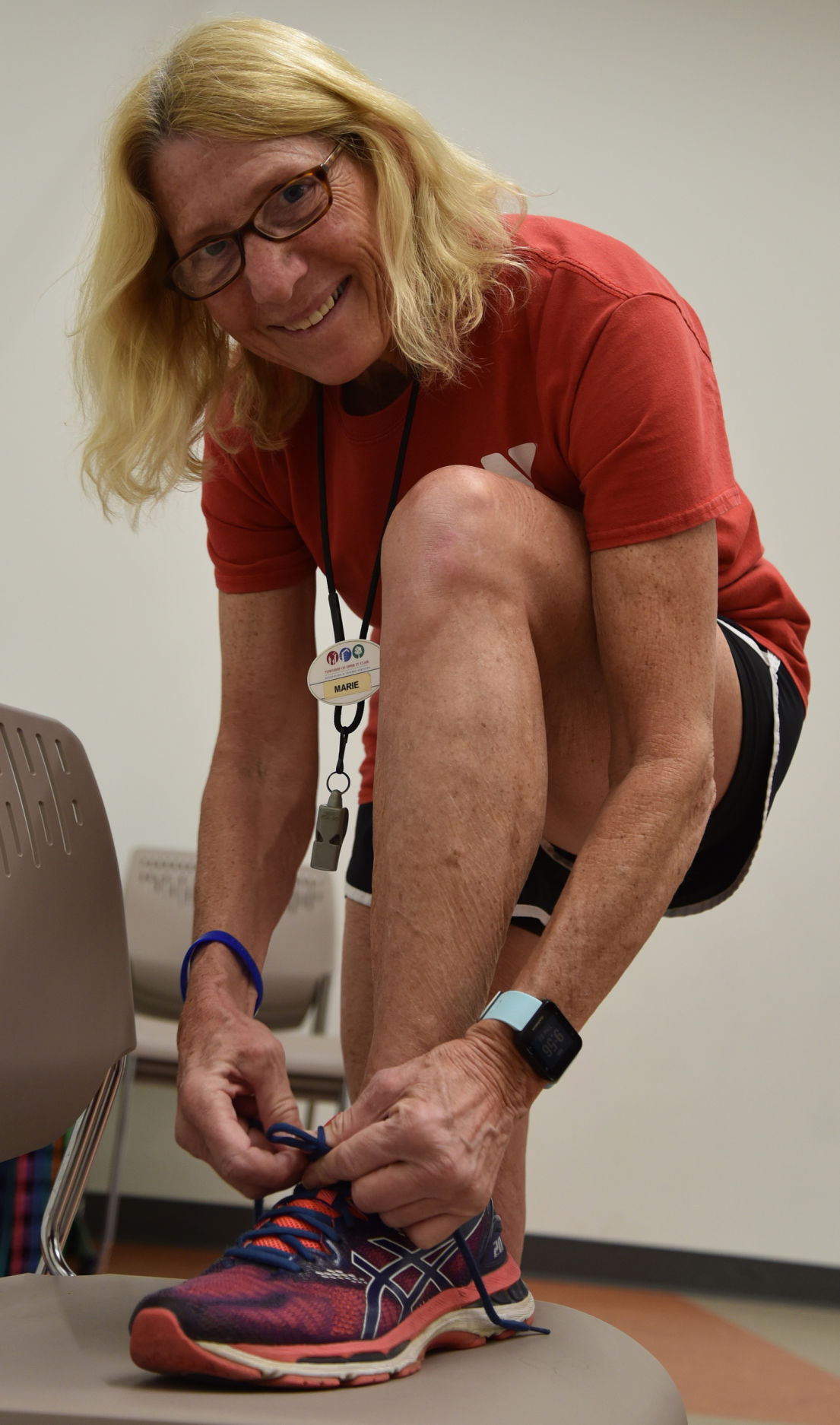 Marie Bartoletti laces up her shoes in preparation for a workout run. 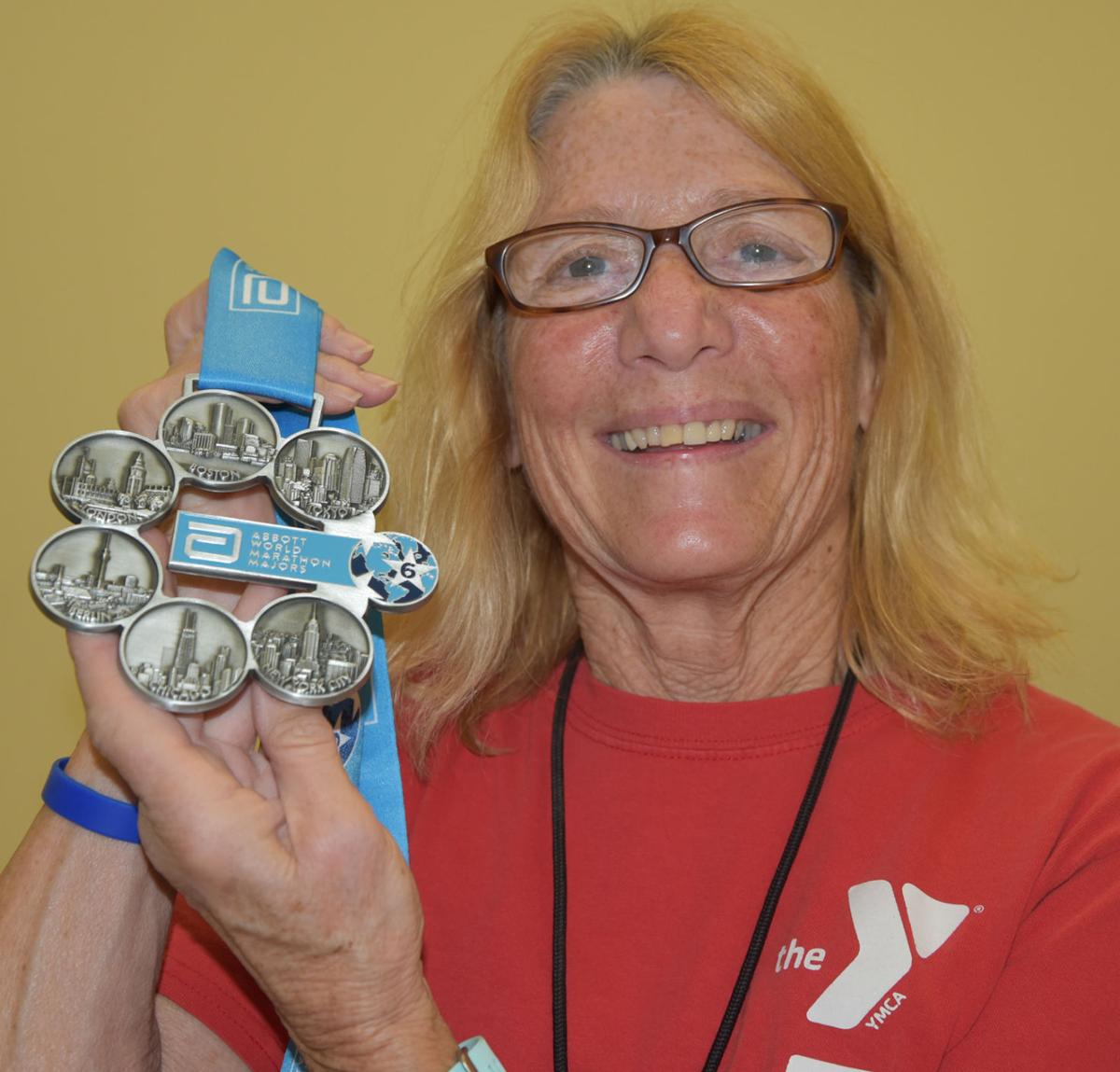 Marie Bartoletti with her medal for completing six major marathons around the world. 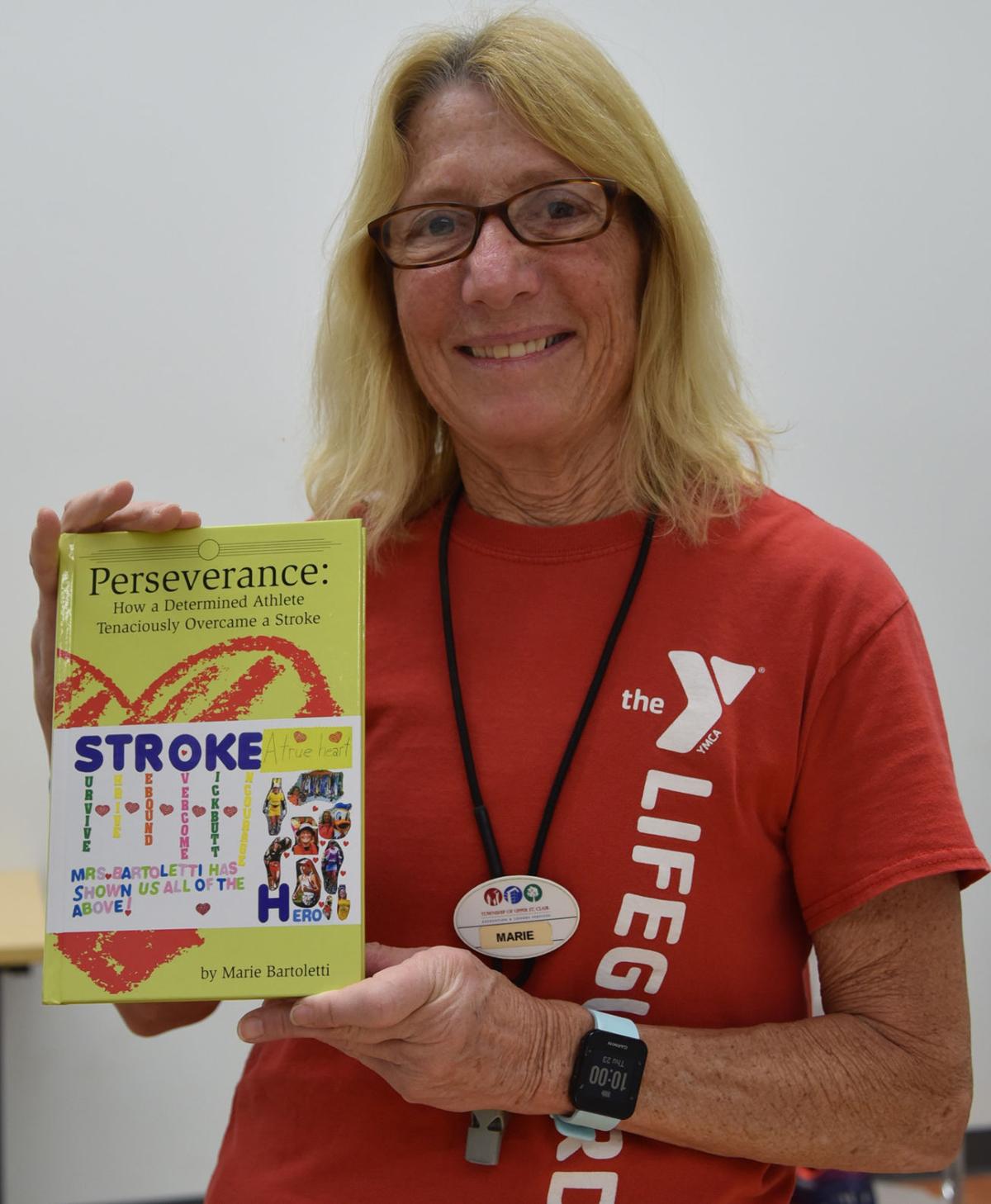 Marie Bartoletti with the book she wrote after suffering a stroke 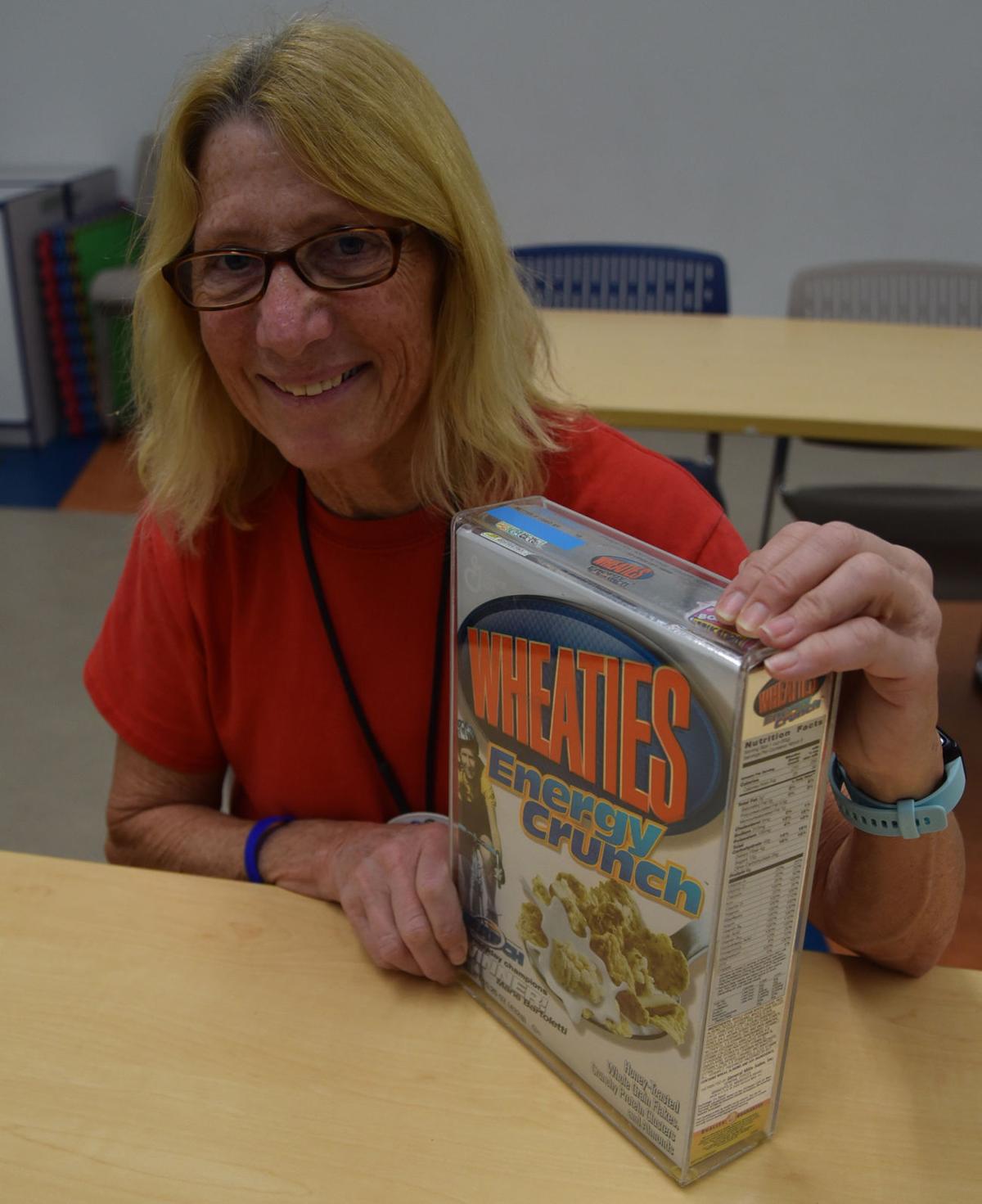 Marie Bartoletti was once featured on a Wheaties cereal box. 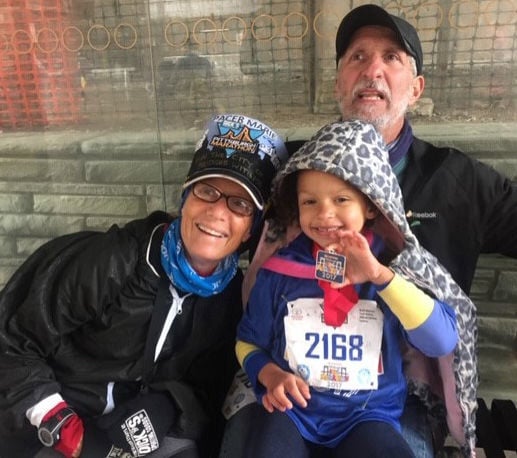 Marie Bartoletti is pictured with her pacer pal, Noelle Malstrom.

Marie Bartoletti laces up her shoes in preparation for a workout run.

Marie Bartoletti with her medal for completing six major marathons around the world.

Marie Bartoletti with the book she wrote after suffering a stroke

Marie Bartoletti was once featured on a Wheaties cereal box.

Marie Bartoletti is pictured with her pacer pal, Noelle Malstrom.

To say Marie Bartoletti possesses a passion for running is an understatement. The Bethel Park woman has completed 481 marathons – 180 of them after suffering a stroke a little more than four years ago.

When asked how she has been able to accomplish such amazing achievements, the 62-year-old grandmother hangs her head. Softly and slowly she says, “I don’t know.”

Only twice in her life has Bartoletti ever been uncertain about keeping up the pace.

The first instance occurred more than 30 years ago. While teaching physical education at Sacred Heart school, her students asked her if she wanted to run a 10-kilometer race with them.

“I never ran one mile before,” Bartoletti answered.

Although she struggled to cover the six miles, she completed her first City of Pittsburgh’s Great Race. She admitted that three miles in she was “huffing and puffing” because she had only trained for that distance. She decided to increase her workouts.

“That’s why I started running marathons,” she explained.

She completed her first long-distance run again on the city streets. On May 7, 1995, she finished the Pittsburgh Marathon in 4:01:48, much to the delight of the faculty and students at Ringgold High School, where she was working as a substitute.

As her teaching career blossomed, so did her marathon exposure.

Bartoletti taught PE at Pleasant Hills Middle School and McClellan Elementary School at West Jefferson Hills. She also coached volleyball, track and tennis at Thomas Jefferson High School. Within that school district, she helped establish the Kids Of Steel Program in Pittsburgh. The initiative, which started with 345 participants and has grown to 8,000, encouraged young runners. They would train for four months, building up from one to 25 miles to complete their 26th mile during the Kids Marathon.

It was in 2003 that a parent of one of Bartoletti’s fifth-graders nominated her for a competition that would feature the winner on a Wheaties Energy Crunch cereal box. As one of five finalists among 5,000, Bartoletti not only earned a trip to New York City, she met Mary Lou Retton. The Olympic gold medal gymnast announced Bartoletti as the winner. She was awarded a $10,000 prize, which she donated to the American Heart Association.

After her trip to the Big Apple, Bartoletti adjusted her running aims. She set out to complete a marathon in every state. She accomplished the feat from 2004-20005, culminating Dec. 11 in Honolulu, Hawaii.

In between and in the years leading up to her medical emergency, Bartoletti raced around the world.

She was honored with a medal for completing six of the major marathons in the world: Boston, Chicago, New York City, London, Berlin and Tokyo. She posted her best time ever, 3:41, at age 50 during the Boston Marathon. Bartoletti also ran in an Ultramarathon (56 miles or 90 kilometers) in South Africa, and even competed in the World Championship Ironman in Kona, Hawaii, completing that triathlon in under 15 hours (14:50:27).

However, 26 marathons into the 2015 calendar year, and shortly after finishing her 300th race, Bartoletti faced her second moment of uncertainty.

On Thanksgiving Day, while on a trip back home to Kalamazoo, Mich., John Rossetti knew something was wrong with his significant other. As a fireman, he recognized the first signs of stroke and immediately called for an ambulance. Though she was administered the clot-breaking drug TPA, Bartoletti incurred injuries that impacted her speech significantly and limited her physical abilities. She had suffered an ischemic stroke that blocked her left medial cerebral artery. Her right hand is compromised. She lost strength in her right foot.

After six days, the hospital discharged Bartoletti and less than a week after her stroke, she went for a six-mile run. Two months later, she ran a marathon in Miami in 5:30.

“Amazing,” said Rossetti, “but that’s Marie. She is literally the toughest person mentally I know ... She is very humble, and her low-key personality is more an inspiration to me than those that go around bragging.”

In 2019, Bartoletti finished 59 marathons, including five in five days. She also competed in last year’s prestigious Athens Marathon, which replicates the original distance covered during the Battle of Marathon in 490 B.C.

With each race, her times have decreased. While she is still off her best, pre-stroke pace of 4:04, she placed first in the Bahamas Marathon in mid-January with a 4:43 time.

More impressive is how Bartoletti has turned her limitations into new career opportunities, unable to teach because of her cognitive issues.

After months of speech therapy, Bartoletti taught herself how to talk again and how to work. She renewed her long-lapsed lifeguarding certification–she served as an aquatics director and summer camp counselor during her collegiate days at Central Michigan University–and is currently employed at the Spencer YMCA in Bethel Park and the Community Recreation Center in Upper St. Clair.

Noting all strokes are different and affect various areas of the brain, Bartoletti explained her sickness did not affect her motor skills. That was why she was able to resume running right away.

Through reflection, Bartoletti is coming to grips with her circumstances. When she goes for a training run, she “thinks” and recites “prayers.” She also says she has prayed while swimming.

“I owe a lot to Him,” she said as she points skyward.

While God graced her with speed, her father inspired her athleticism and instilled her determination. Bartoletti is the third of Rosemary and Richard Soisson’s seven children and first daughter. Mr. Soisson played sports at North Catholic High School. After serving as a fighter pilot during World War II, flying combat missions over Germany, he attended Notre Dame University, where he started at quarterback his freshman year before suffering a career-ending injury. He later became a teacher and a coach.

Today, Bartoletti inspires runners through pacing. While her normal pace is 4:45 for a marathon and 4:15 for a mile, she runs with others to help them reach their goals.

“I love pacing. I love running with people,” she said.

People are equally enthused about Bartoletti and her kindness in sharing her time and talents.

The Spencer YMCA membership navigator also noted that Bartoletti is quick to offer training tips if members mention they are preparing for a race. She’ll even run with them, particularly if it is their first race.

Bartoletti values the time spent pacing because she is able to see other people accomplish their goals.

“Yes, yes,” she said enthusiastically about her favorite aspect of pacing. She added, “I love people. All kinds. Little and big kids.”

Of course, Bartoletti loves her family most. She had two sons with her husband, Mark. David, 35, and his wife, Erin, live in Maine and have two daughters, Maddie, 3, and Ella, seven months. Michael, 34, and his wife, Ashley, reside in Florida and have one daughter, Hannah. They are expecting a baby boy in April.

Not only can Bartoletti boast she is a grandmother and stroke survivor, she is also a published author. Proceeds from “Perseverance” are donated to the American Stroke Association. She noted the book’s title along with a positive mental outlook enabled her to “get through” the stroke. Through speaking engagements as well as interviews, she offers sage advice.

To runners tackling their first race or marathon, she said, “Take your time and just have fun.”

To stroke survivors, she said, “No matter how bad it is, you will get through it. Never give up.”

She added she didn’t really know how she’s done it herself.

Marie Bartoletti’s footprint is everywhere, including all of the United States but she has left the biggest impression on Joanne and Noelle Malstrom.

Three years ago the mother-daughter duo met Bartoletti when she was employed part-time as a lifeguard at Heathtrax in Bethel Park. Bartoletti offered to help Noelle as the 5-year-old trained for the Kids of Steel one-mile marathon. They have run together since and will again on May 2 when the event is held in conjunction with the Pittsburgh Marathon.

Marie and Noelle met each week at the South Park track and trained. In addition to running around the oval, they climbed the steps, jogged backward, stretched, talked strategy.

“And hugged,” added Joanne. “Marie has a heart of gold for helping others. She is ours and so many others Energizer Bunny.”

Indeed, Marie has completed 481 marathons, 180 of them since suffering a stroke on Thanksgiving Day in 2015. She is also a marathon pacer so she travels the globe and encourages others to run.

“She is such an inspiration,” added Joanne. “She has such a big heart to go along with her mental strength.”