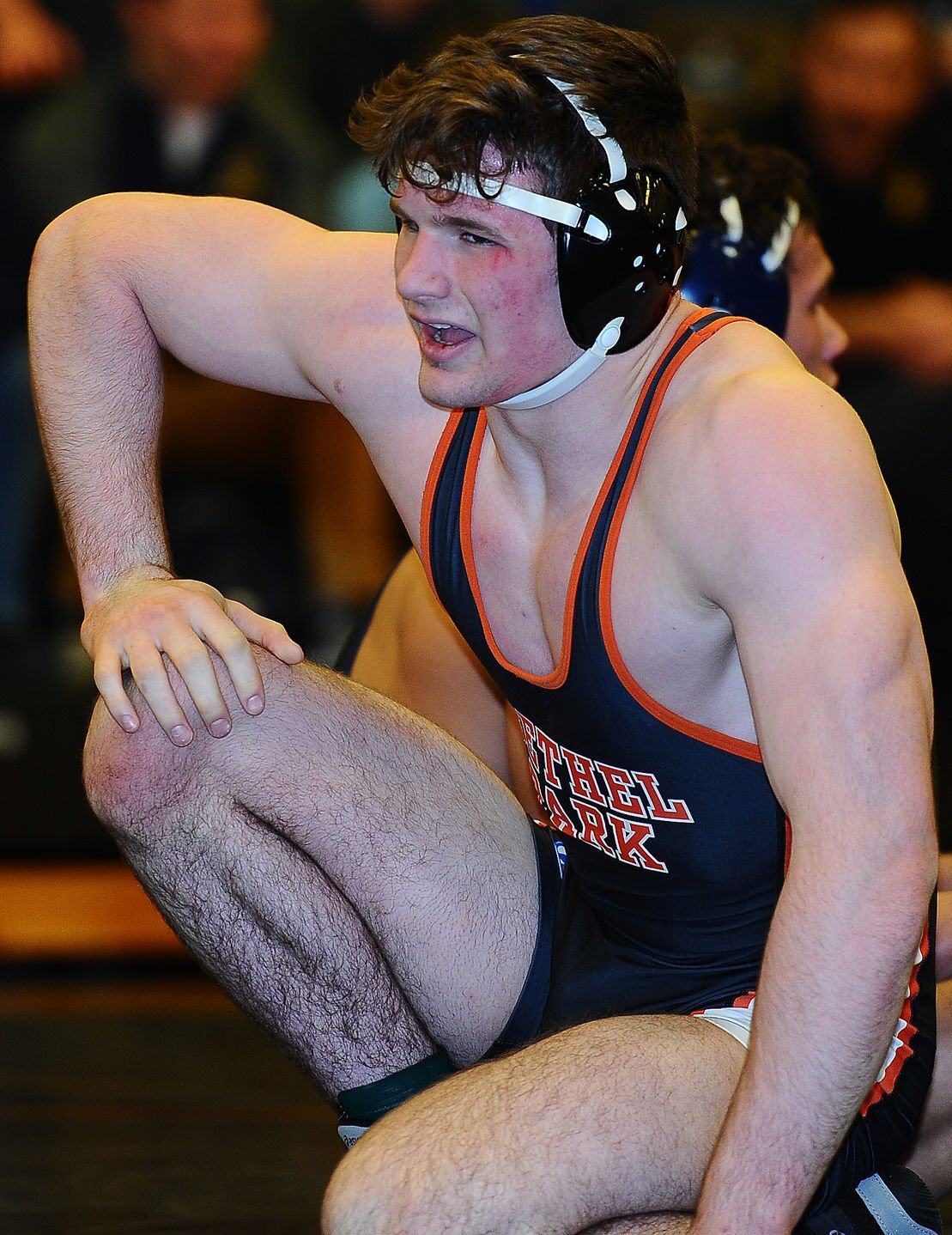 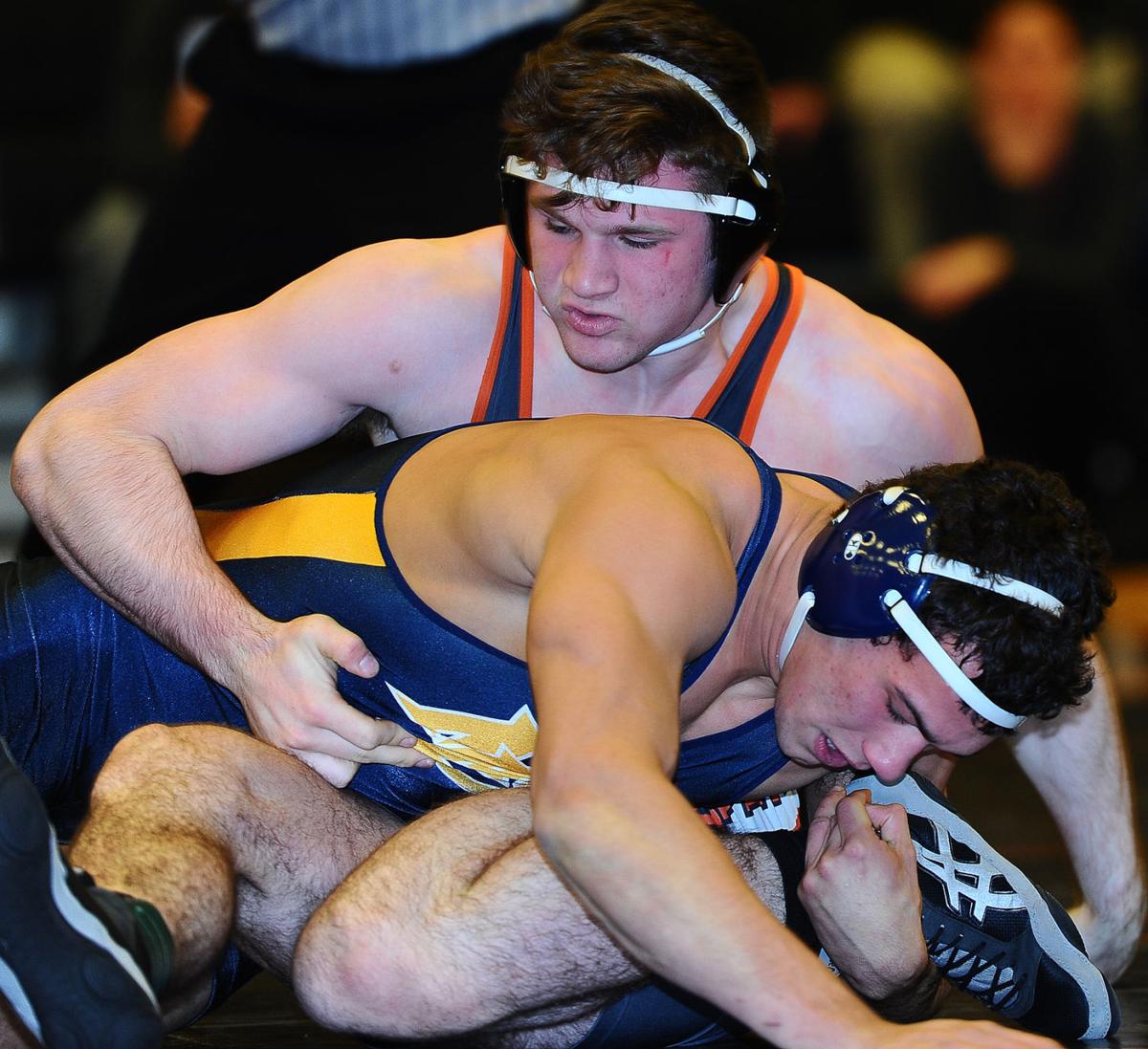 Luke Montgomery and Luke Stout get tangled up during recent wrestling action. The two Lukes rank among the top 195-pound grapplers in the WPIAL as well as the PIAA. 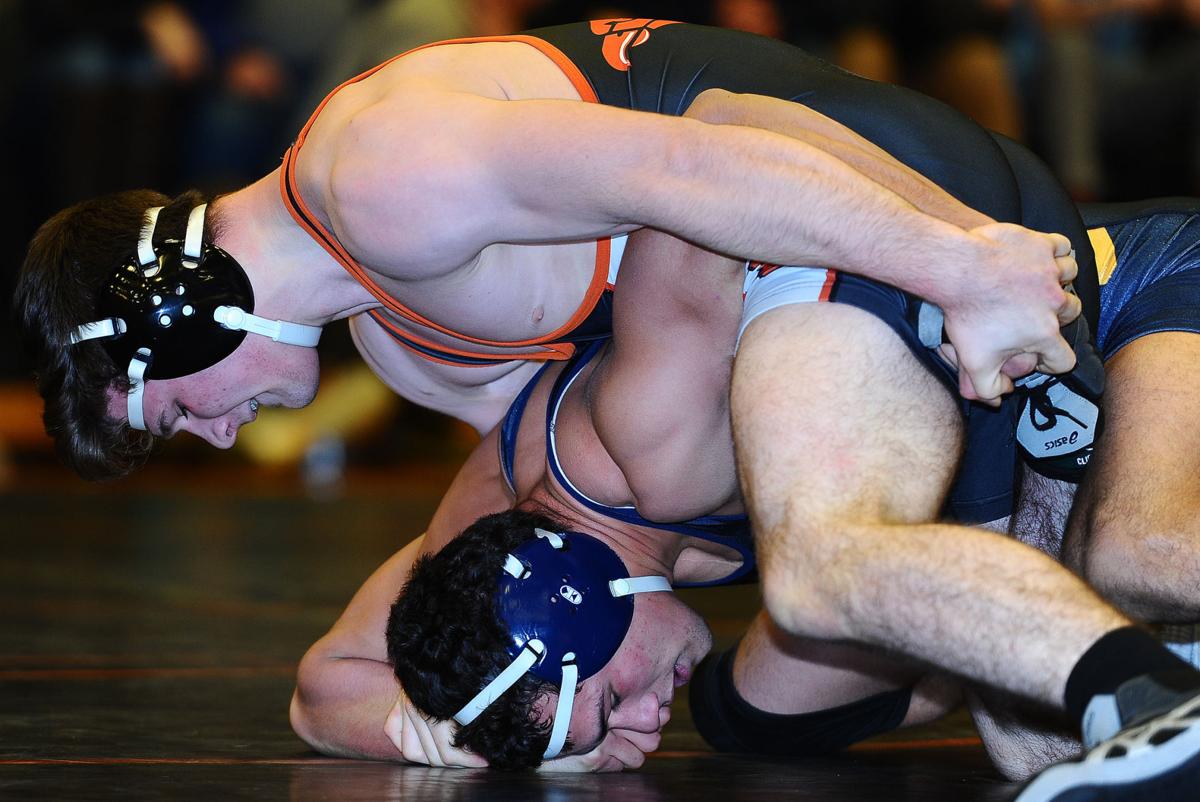 Luke Montgomery controls the early action with a strong grasp of Luke Stout's leg. Despite his fast start, the Bethel Park grappler dropped a 6-2 decision to rival Luke Stout of Mt. Lebanon 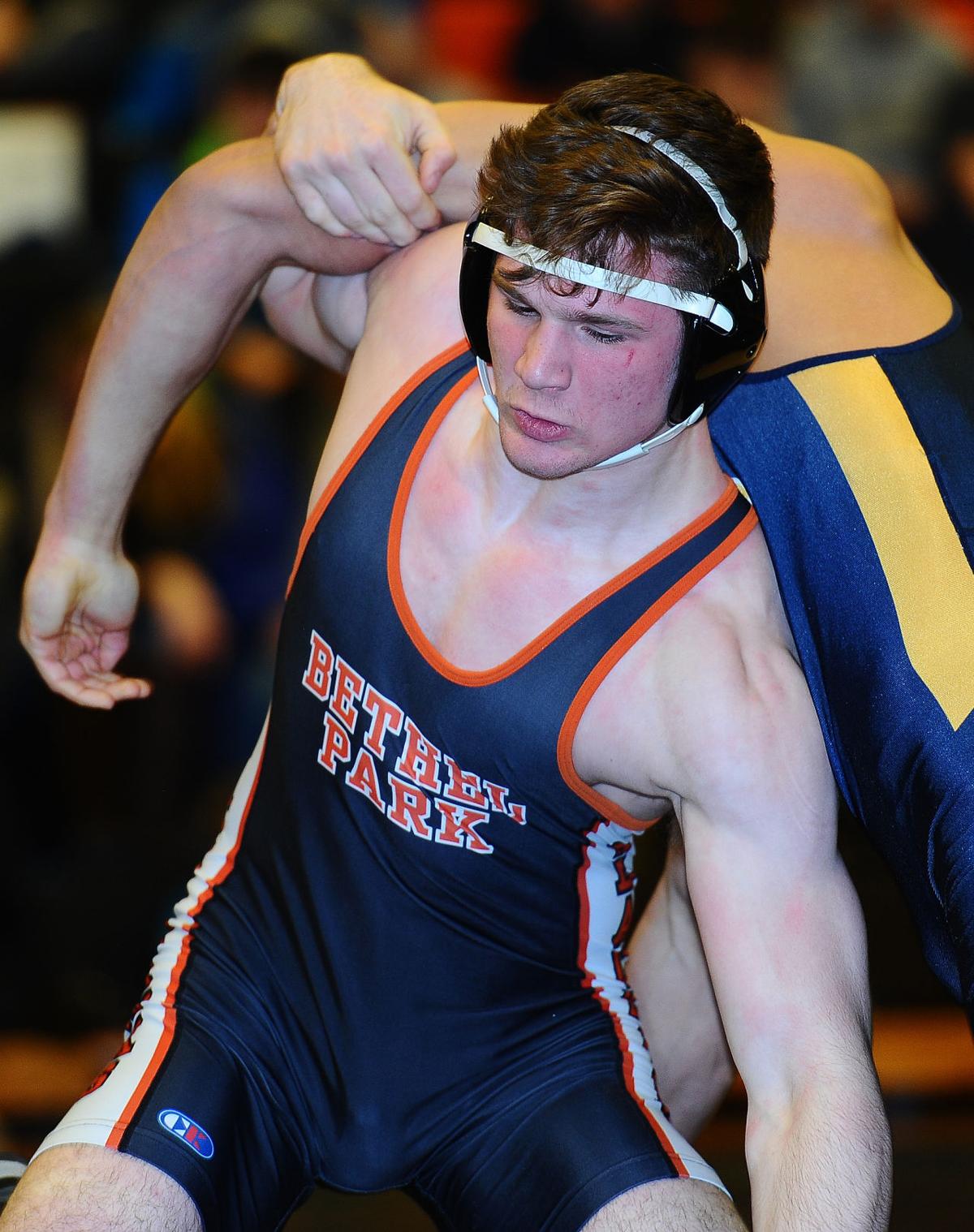 Bethel Park’s Luke Montgomery attempts to escape from a hold during a recent match against Mt. Lebanon’s Luke Stout.

Luke Montgomery and Luke Stout get tangled up during recent wrestling action. The two Lukes rank among the top 195-pound grapplers in the WPIAL as well as the PIAA.

Luke Montgomery controls the early action with a strong grasp of Luke Stout's leg. Despite his fast start, the Bethel Park grappler dropped a 6-2 decision to rival Luke Stout of Mt. Lebanon

Bethel Park’s Luke Montgomery attempts to escape from a hold during a recent match against Mt. Lebanon’s Luke Stout.

Luke Montgomery tries to come at opponents like a tsunami.

As a result, few wrestlers left in the Bethel Park senior’s wake have found much success.

Montgomery is 16-2 this winter with his lone losses coming both to Mt. Lebanon’s Luke Stout, who is the WPIAL and PIAA’s No. 1 ranked 195-pound wrestler.

Montgomery is the No. 2 ranked district and state at 195 pounds.

“I’ve been trying to create a wave,” said Montgomery of his secret to his success so far this season.

Montgomery worked during the summer to prepare for the 2020 campaign. He said he gathered a lot of tools and has begun to “refine” them at this point.

In addition to training in the weight room at Bethel Park, Montgomery works out at Quest School of Wrestling in North Strabane and Naaman Club in West Mifflin.

“A lot of it is techniques and figuring out what works at all levels,” he said. “What works on a mediocre wrestler won’t against the top opponents so you figure it out by working on good guys (at the club) and I’ve been able to carry that out during the season.”

The neutral position has worked best for Montgomery and enables him to exploit the weaknesses of his opponents.

“His neutral position is his strength because he has some good freestyle moves and is explosive from his feet,” Crawford said. “He has a lot of tools. He doesn’t just have one take down that he sticks too. He has several.”

And there are other tools Montgomery has used to become one of the state’s top wrestlers.

For starters, he took to sports naturally.

His father, David, wrestled in Maine where he grew up. His mother, Renee, played basketball. His brothers, Adam and Jason, preceded him in wrestling at Bethel Park. Jason is currently wrestling at the University of Pennsylvania.

“My brothers got me started,” said Montgomery who began wrestling in first grade. “There was no sibling rivalry or competition like that between us because we all wrestled at different weights. But they helped me mature and get better.

“No, I’m not the best in the family,” he added, “but they certainly set the standard.”

Montgomery has a WPIAL runner-up and seventh-place medalist at the PIAA championships to his credit. He is also a three-time place winner at sectionals.

This season, he has already won a title at the Southmoreland Holiday Classic and a runner-up trophy in the Eastern Area Tournament.

Montgomery posted a 5-0 record at the Southmoreland event. He defeated the top seed in Hunter Tremain of North Star in the finals. En route to his title, he also recorded a pin and a technical fall.

In addition, Montgomery had a strong showing in the Moon Duals, where he beat two wrestlers that were ranked in the top 8 in the state.

His primary nemesis, however, is Stout. The Mt. Lebanon wrestler, who was a WPIAL champion and PIAA runner-up last season, beat Montgomery, 5-2, in the finals at the Eastern Area Tournament. Stout also scored a 6-2 decision in Bethel Park’s dual-meet loss to Lebo, 50-21, last week.

In each bout, Montgomery forged a 2-0 advantage.

Crawford said Montgomery and Stout have developed quite a rivalry.

“Those two are going to see each other again at sectional finals, WPIAL finals and hopefully the state finals,” he said. “With the returning state champion going down with a torn labrum, that makes them the top guys in the state right now. So we are hoping to close that gap. We need to get a little better. I think we can do that.”

Conditioning is the key.

Montgomery said he prefers lifting to running. He also trains against teammates like Tyler Thimons and Nathan Currie, who are BP’s stronger heavier weights, as well as his coaches and alumni that drop in for practices.

“Honestly, my condition was worse than his,” he said of his losses to Stout. “That is why I wanted to stay on my feet as much as possible. My first match was worse than the second, but my cardio and conditioning have improved to the point that I knew I could take him down.”

Montgomery vows improvement, which he said his necessary to attain his goals of becoming a WPIAL and PIAA champion.

“I’ve got to get bigger and stronger,” he said. “I’m undersized right now and I need to get more conditioned. It’s not good right now, but it’s getting better. I also have to analyze what I do right and wrong, how I hold down or take down an opponent.”

Montgomery said he will continue to work and wrestle.

“Wrestling teaches you a lot of life lessons,” he said. “There are a lot of challenges you can overcome and work ethic pays off. But losing in wrestling is pretty hard, especially because you are all into it. It builds character.

“But I like winning,” he added. “I like that it’s an individual sport and what you put into the sport, you get out of it.”

Montgomery will likely get a scholarship out of wrestling. Several Division I schools already have expressed interest and because of his 4.0 GPA, he has paid visits to Stanford, Brown, Pitt and Penn. Montgomery hopes to major in business and work on Wall Street some day.

Sport: Wrestling. Played football as a freshman and ran cross country as a sophomore.

What you do in your spare time: Bowl with my friends

Food: My mom’s pulled pork. “During the season, I don’t have it a lot because I adhere to a good diet. I cut out the needless sugars, pop and snacks. It’s been effective.”

Who would play you in a movie: Matt Damon. “I think he has the same composure as me. It is an asset in a match. I treat my matches like practice. I don’t feel nerves out there.”