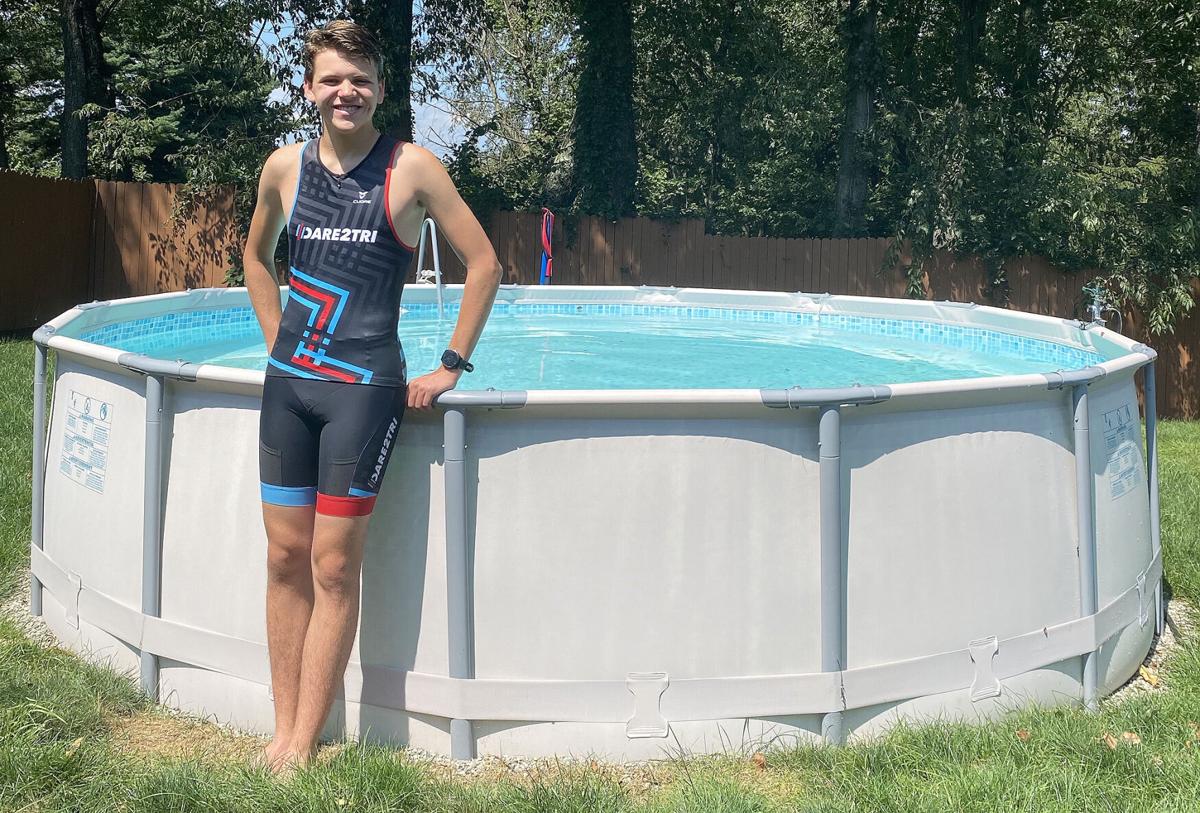 Brock Kitterman stands beside the inflatable pool he purchased for his backyard so he could practice for his triathlon events because most indoor and outdoor facilities were closed during the pandemic. 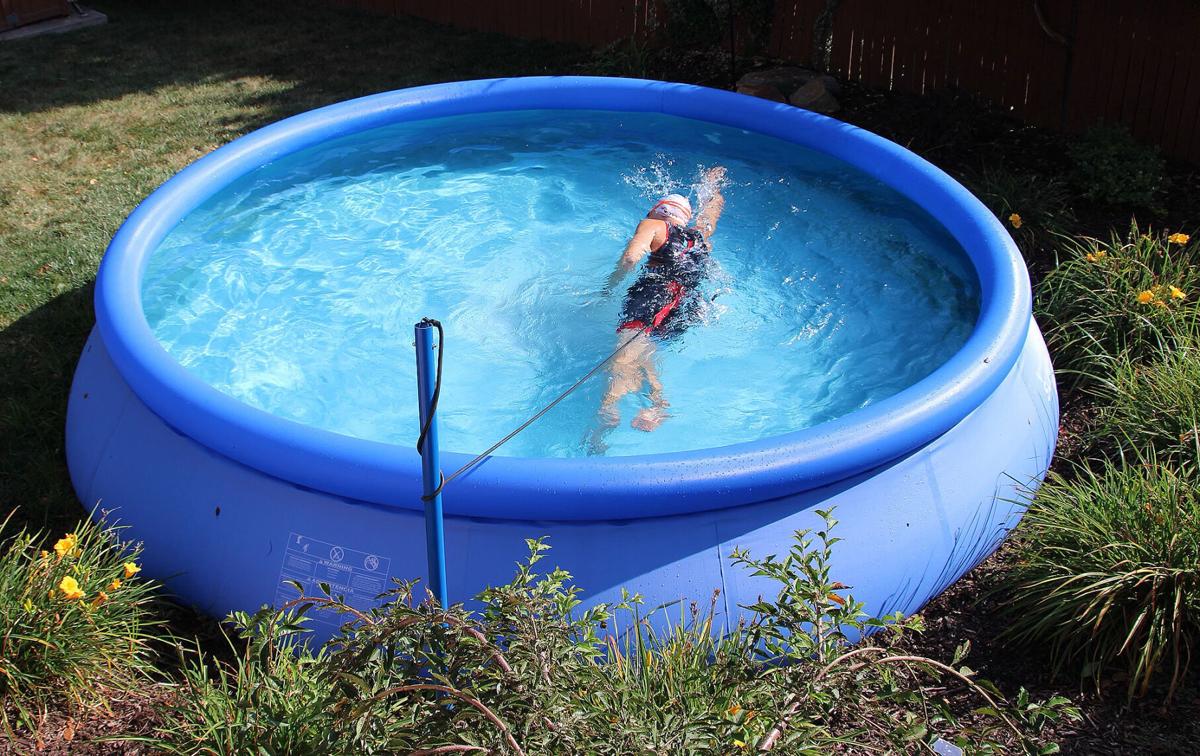 Brock Kitterman swims tethered to a pole in his inflatable backyard pool. 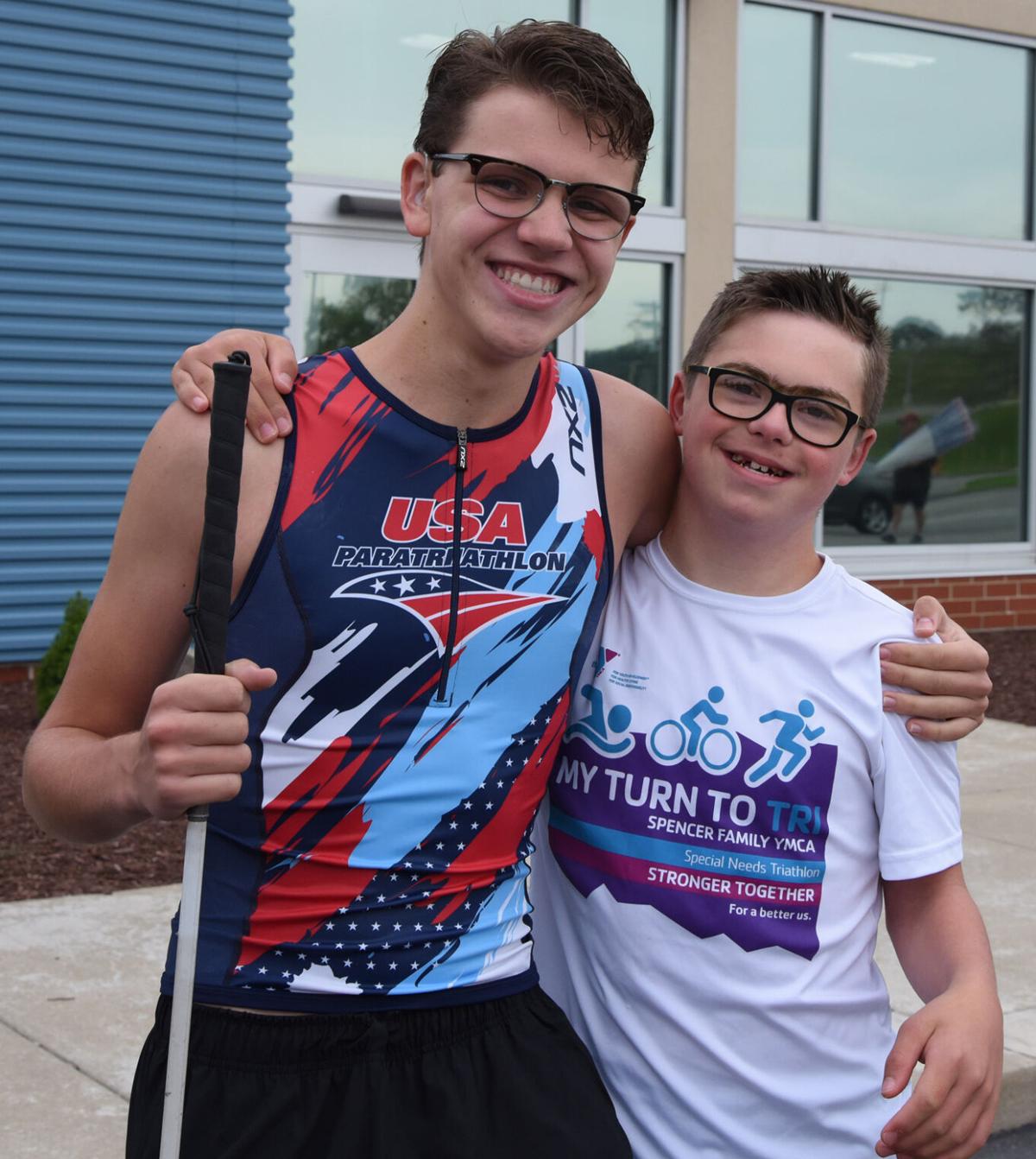 Brock Kitterman poses with Christian Fishell during the My Time To Try special needs triathlon. Kitterman was a special guest speaker and presenter of the post-event awards.

Brock Kitterman stands beside the inflatable pool he purchased for his backyard so he could practice for his triathlon events because most indoor and outdoor facilities were closed during the pandemic.

Brock Kitterman swims tethered to a pole in his inflatable backyard pool.

Brock Kitterman poses with Christian Fishell during the My Time To Try special needs triathlon. Kitterman was a special guest speaker and presenter of the post-event awards.

He excels in his AP and honors classes with the hopes of one day being accepted in a college engineering program. His dream schools are Purdue and Penn State.

Kitterman also competes in triathlons during the warmer months of the year and ice hockey during the winter.

“I’m normal except I lack sight and hearing,” said the 16-year-old Kitterman.

At 12 weeks of age, Kitterman was diagnosed with Bilateral Retinoblastoma. The chemotherapy he received to treat the cancer damaged his hearing leaving him deaf as well as blind.

Kitterman said he was “very unlucky” because the cancer attacked both eyes. The disease usually only impacts one pupil. He said colors are perceived as a blur and shapes are ill-defined, while he is aware of objects, but only within a five-foot radius.

“I would never know if you were smiling at me or not. I can’t make out facial expressions or impressions,” he said. “Eliminates prejudices.”

While his hearing loss was a side effect of the chemo, Kitterman contends he hears “decently” but has trouble distinguishing phonetic sounds like words with the letters S and T. High-pitch noises are inaudible and he hears musical instruments differently.

“I’m missing nothing nor am I jealous,” Kitterman said. “I just don’t see the world as well as everybody else does.

“It’s all I have ever known and I am at peace with it,” he continued. “I love my life for what it is. I couldn’t ask for anything more.”

Kitterman’s life is that of a seasoned athlete endeavoring to earn a spot in future Paralympic Games.

On Oct. 21, he will travel to Utica, N.Y., to participate in a blind hockey tournament and five-day training camp that will determine the U.S. Paralympic national hockey team.

“I would love to make the team as a reserve but I’m still very young and a minor to make a team that is made up of the 30 best players in the country,” Kitterman said.

Kitterman is hopeful blind hockey will be included in the 2026 Paralympic Games to be held in Milano, Italy. Two new teams and two new countries need to be added for inclusion in the games.

By 2028, Kitterman plans to compete in the Summer Paralympic Games in Los Angeles. He has the resume to support his spot in the triathlon event.

In 2020, he was one of five members selected for the USA Triathlon and Challenged Athletes Foundation’s junior development program. The first-of-its-kind collaboration was designed to support aspiring para-triathletes, ages 12-17, with grant funding, coaching guidance, apparel and other development resources.

“Being the reigning champion and winning the race in Ohio again as well as the race in California have been my biggest highlights this year,” Kitterman said. “No matter how good or bad I did, it was just great to compete because I am very young and there is a lot of life left in me (for triathlons).

“Triathletes peak in their mid-30s,” Kitterman added. “That’s a lot longer than football and hockey. As long as I am physically able, I plan to do both sports.”

To train for triathlons, Kitterman chisels out multiple 30-minute workouts throughout his busy day. He sprints 3.1 miles, rides a bike trainer for 10 miles, swims a mile at the Spencer Family YMCA pool or in his inflatable backyard pool, performs a strength workout with resistance weights. Then he takes 30 hockey shots.

“Seven days a week, 365 days of the year,” Kitterman said of his workout routine.

Kitterman also follows a strict diet. “No sweets. No sugar. No soda,” he said. Once in a while, he’ll indulge in a little ice cream.

“It’s mainly fruits and vegetables. My mom is a good chef. She runs the best kitchen,” said the son of Tammy and Grant Kitterman.

Because of their visual impairment, triathletes like Kitterman are tethered to a guide during competitions. They also ride tandem bikes during the cycling portion because they are dependent upon them to steer and see where they are going.

“I have to really trust (my guide),” Kitterman said.

In hockey, Kitterman’s teammates must trust him and depend on his sight. Those with 10% or less vision are forwards, defenders’ blindness ranges from 5% completely blind and goalies are completely blind.

“We still find a way to blame him for a loss,” Kitterman laughed.

A left winger, Kitterman said he is a playmaker not a goal scorer.

“I make the pass,” he said. “Others take the shots and I get credit for the scores.”

Kitterman’s primary responsibility on the ice is giving direction. He shouts out where the puck is on the ice for his visually impaired playmates.

“Communication is so important and playing hockey really helps me with communication,” Kitterman said.

Hockey and triathlons are complementary yet on the opposite ends of the spectrum. As a result, Kitterman enjoys both equally.

“It’s hard to pick which I prefer because they both have their pros and cons,” he said. “A triathlon is very solo and individual thing while hockey incorporates the team aspect. I think I prefer that. But a triathlon helps with hockey especially because of the running and cycling and the endurance and speed needed, especially at the end of a shift.”

Whether performing on ice, in the water, on a bike or on the run, Kitterman sees himself as anybody else. He does not view his impairments, his blindness and hearing loss, as negatives.

“I’m just a modified me,” he said “I will do all the things that you do, just differently.”