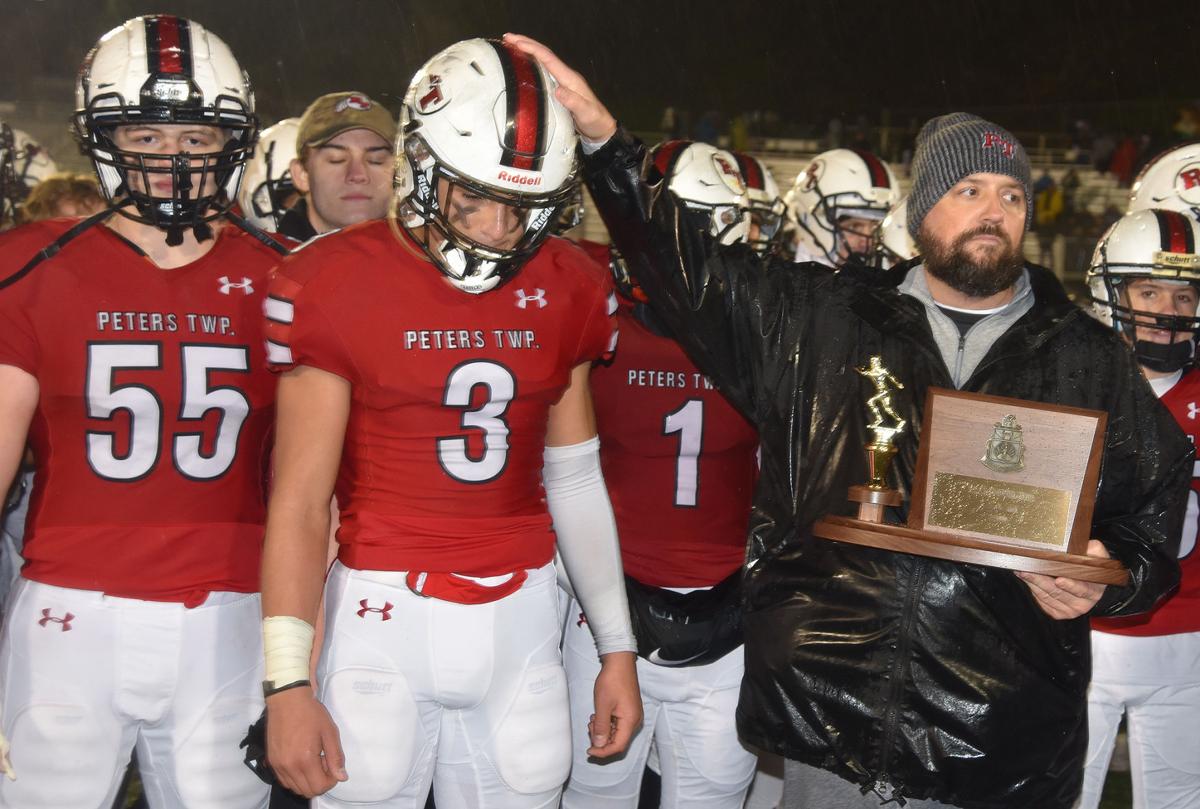 T.J. Plack attempts to comfort Donovan McMillon (3) and Ethan Spangenberg (55) while accepting the WPIAL runner-up trophy after Peters Township’s 21-20 loss to Gateway in the Class 5A final. 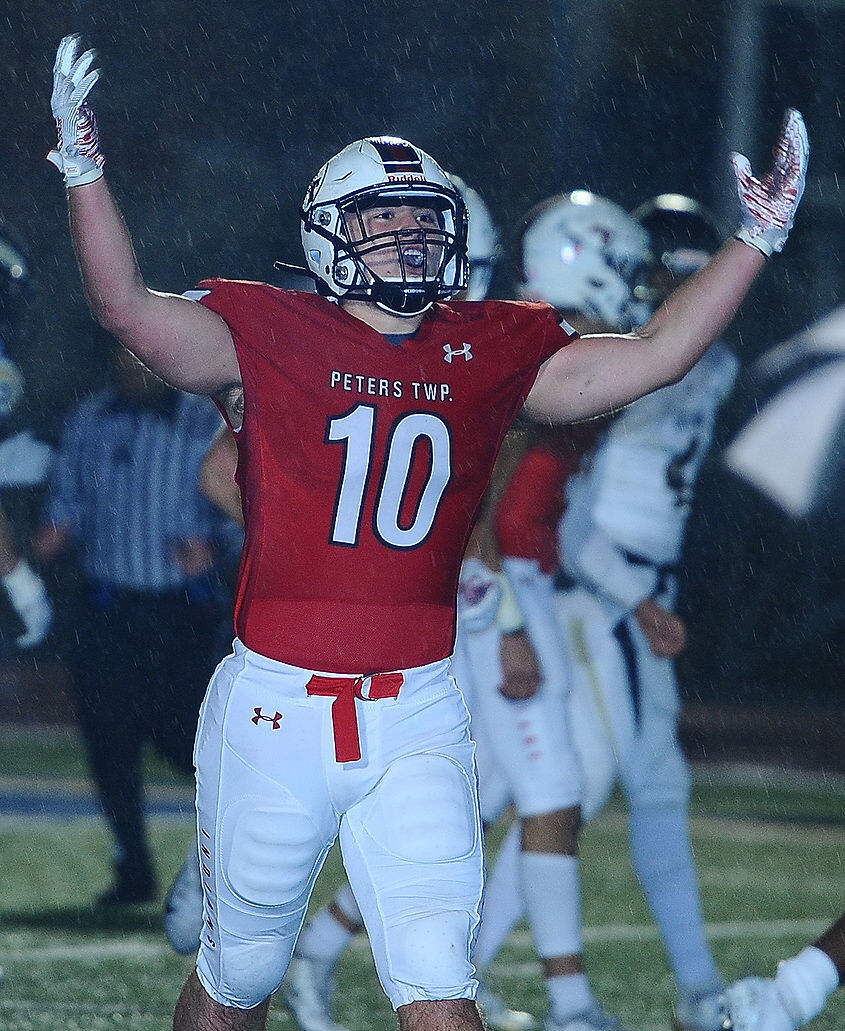 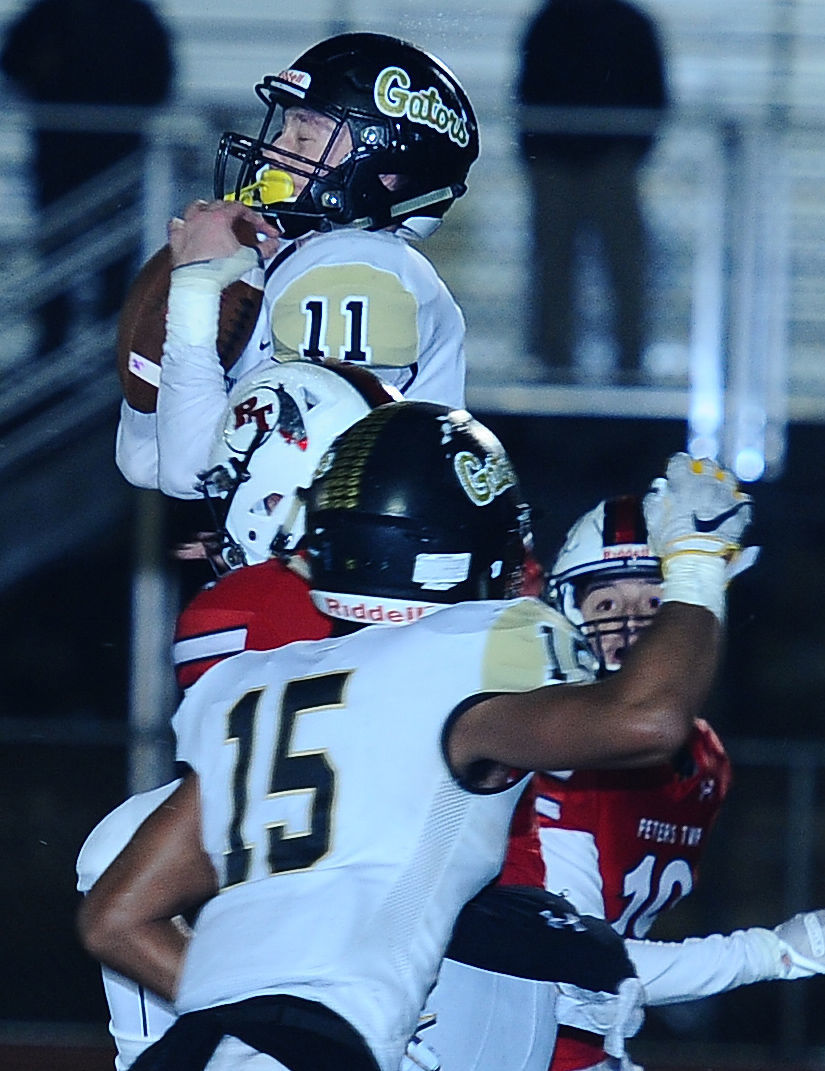 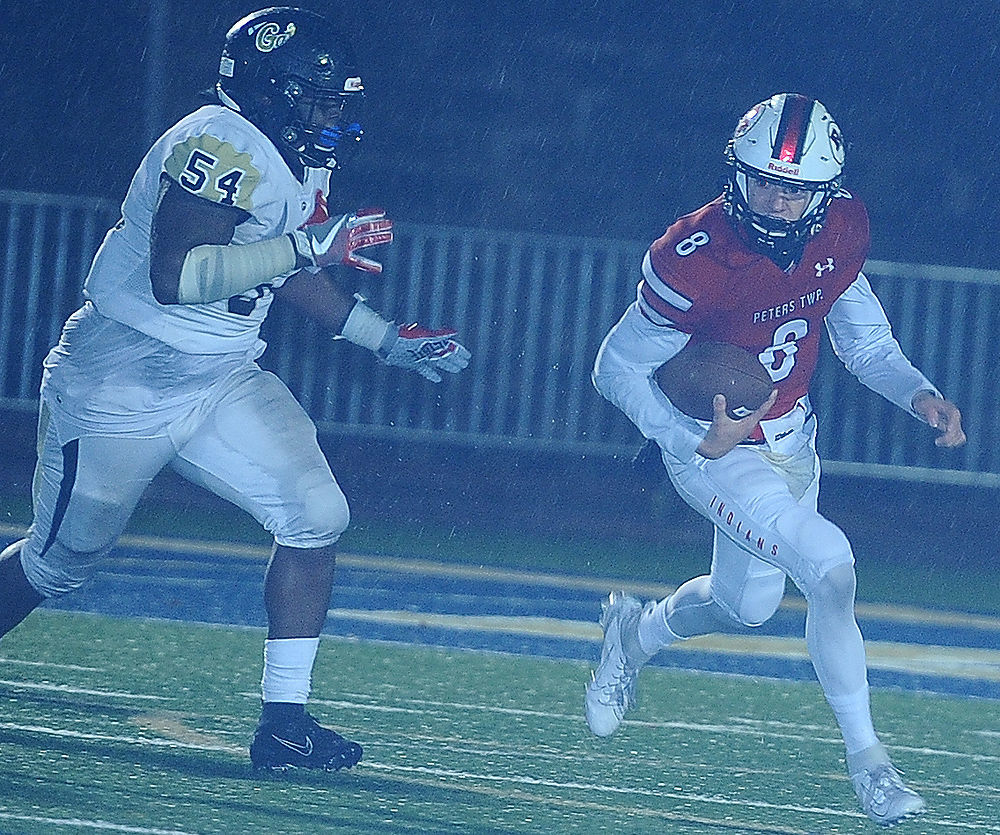 Logan Pfeuffer (8) attempts to avoid a sack by Kevlon Nelson (54) during WPIAL Class 5A championship action. 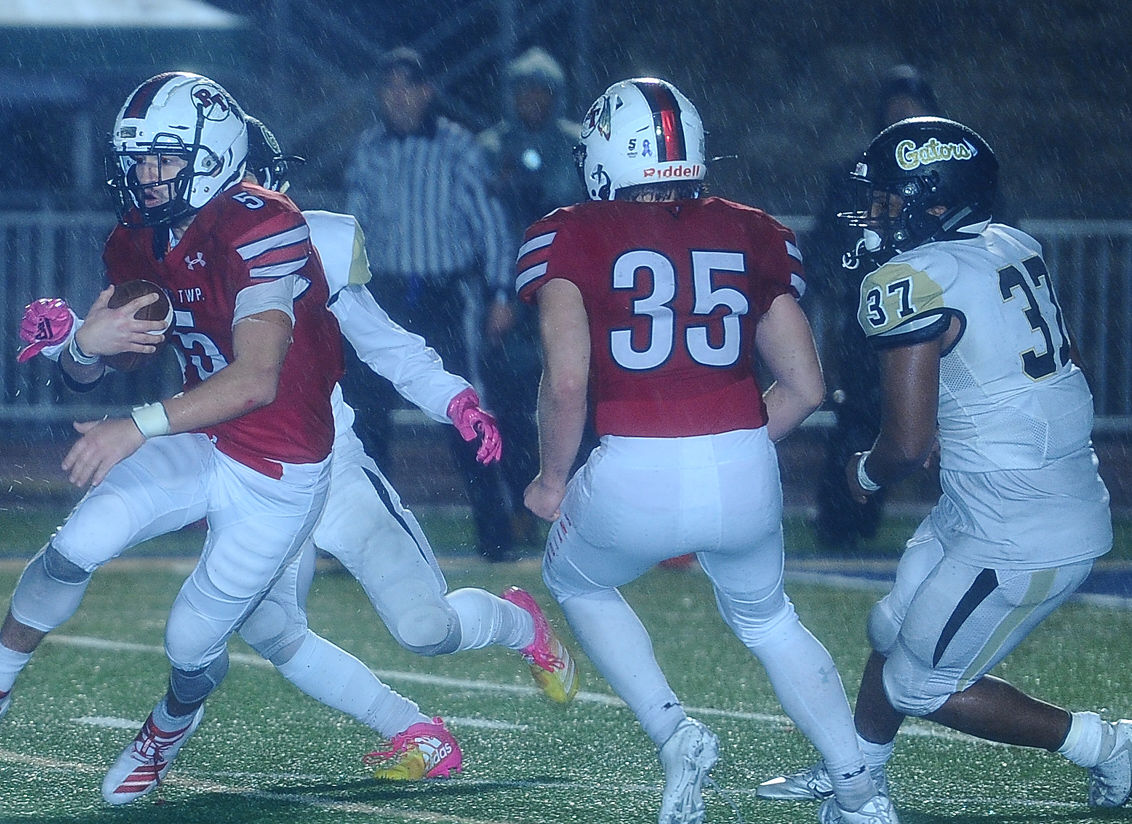 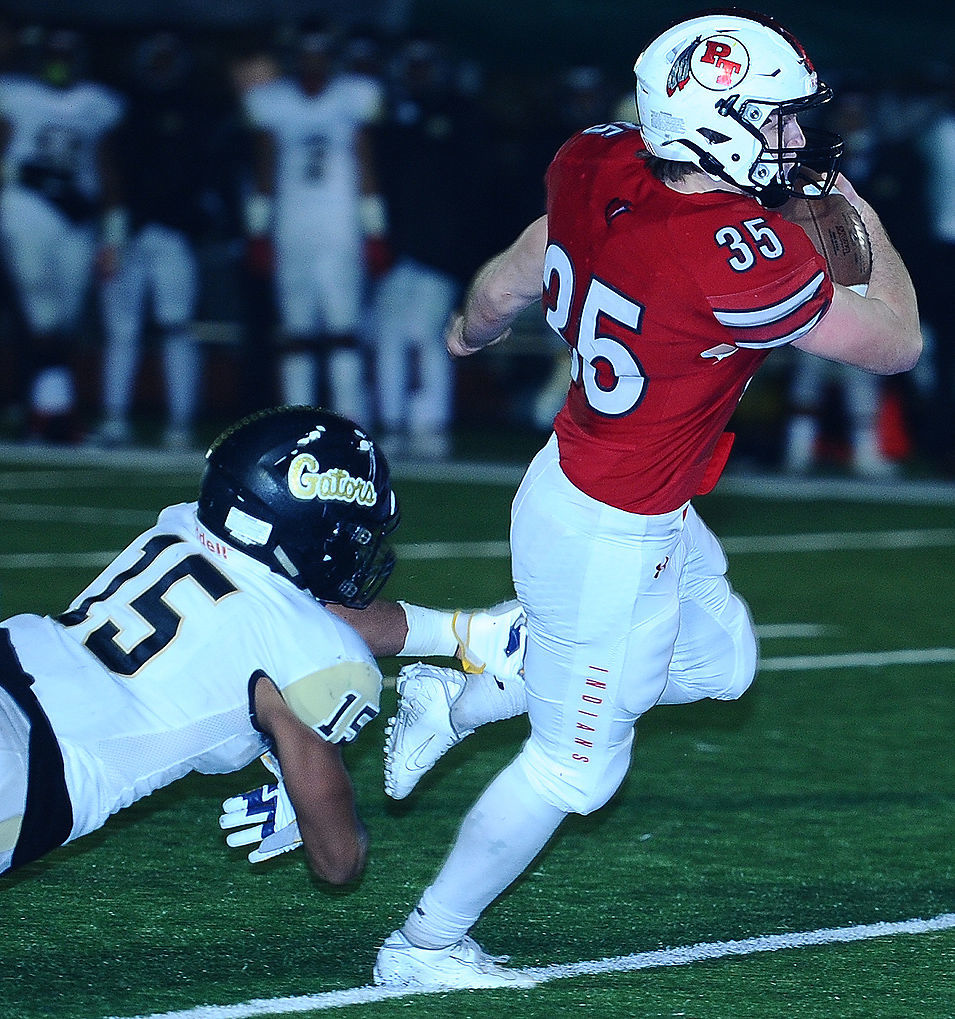 Ryan Magiske (35) eludes the grasp of Tui Faumuina-Brown (15) after making an interception. 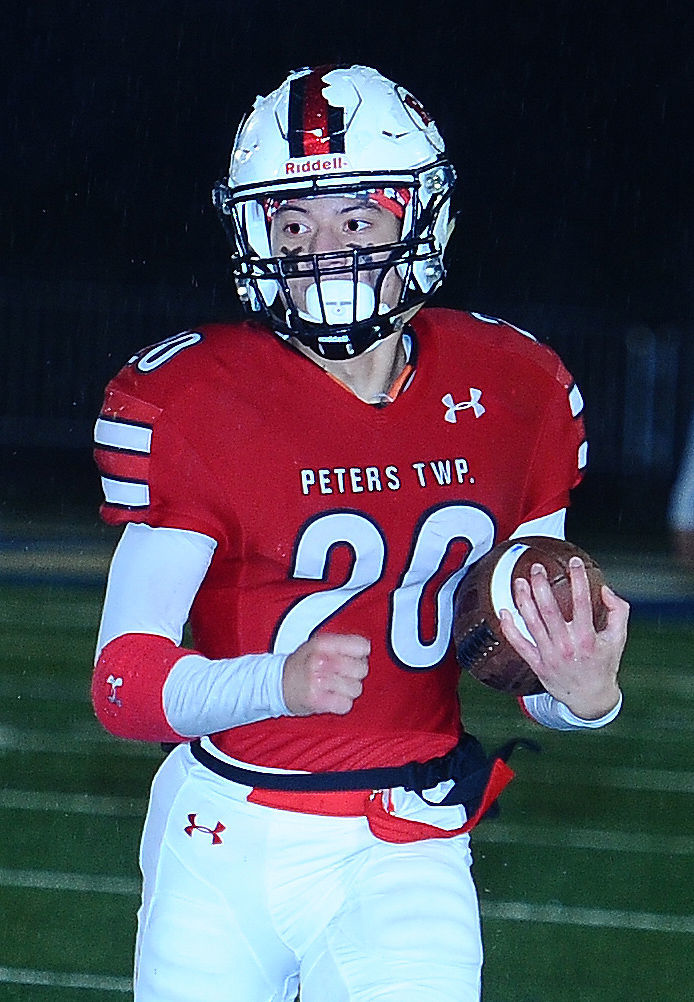 Adrian Williams (20) picks up big yardage after making a reception during Peters Township’s 21-20 loss to Gateway in the WPIAL Class 5A final. 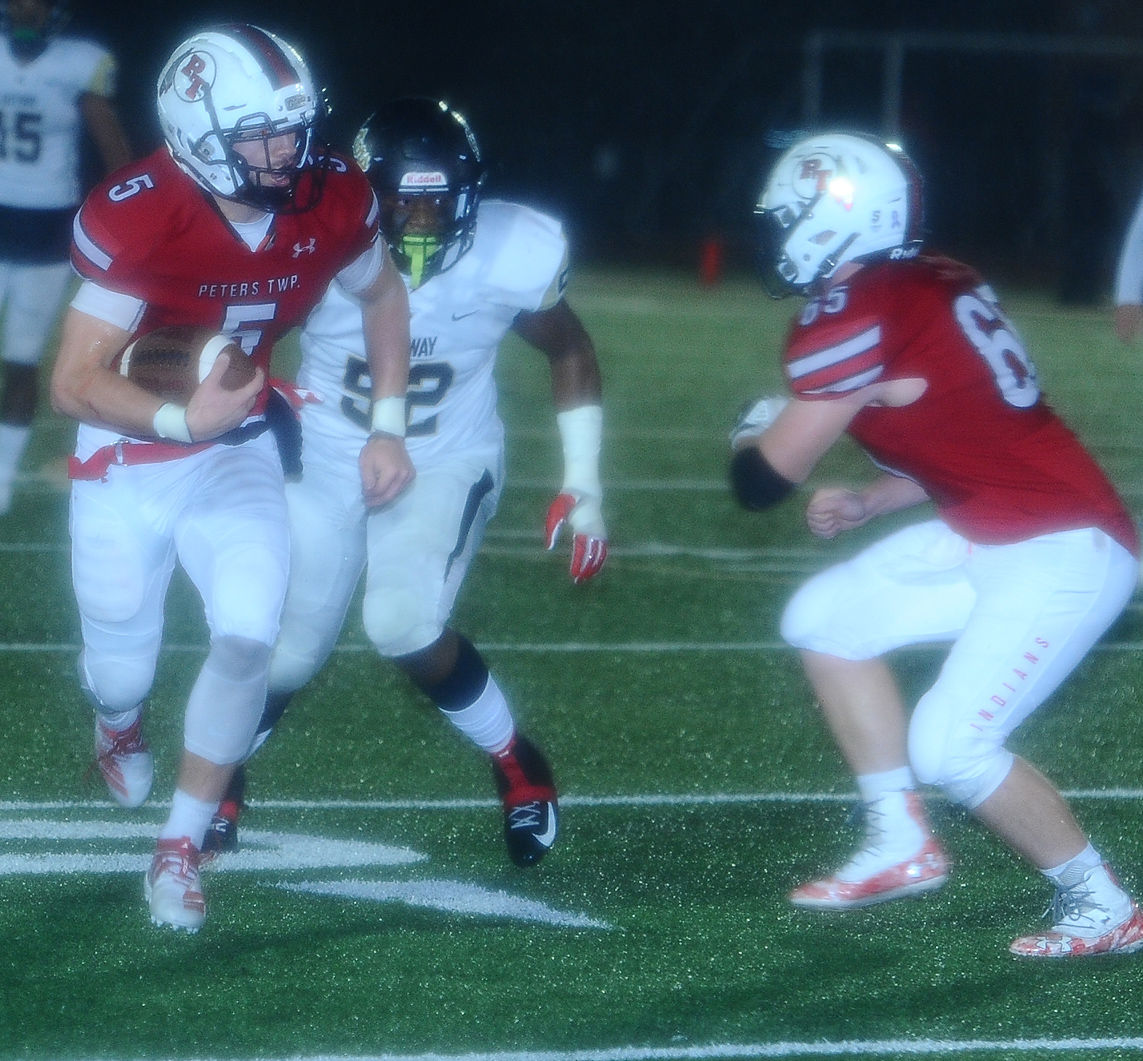 Josh Casilli (5) races downfield after making a reception during first-half action of the WPIAL Class 5A championship game.

T.J. Plack attempts to comfort Donovan McMillon (3) and Ethan Spangenberg (55) while accepting the WPIAL runner-up trophy after Peters Township’s 21-20 loss to Gateway in the Class 5A final.

Logan Pfeuffer (8) attempts to avoid a sack by Kevlon Nelson (54) during WPIAL Class 5A championship action.

Ryan Magiske (35) eludes the grasp of Tui Faumuina-Brown (15) after making an interception.

Adrian Williams (20) picks up big yardage after making a reception during Peters Township’s 21-20 loss to Gateway in the WPIAL Class 5A final.

Josh Casilli (5) races downfield after making a reception during first-half action of the WPIAL Class 5A championship game.

T.J. Plack knew exactly what to worry about against the Gateway offense.

The Peters Township High School football coach wasn’t solely focused on one particular player, not even highly recruited Derrick Davis. It was particular plays, big-yardage plays to be exact, that he knew his defense would have to prevent.

The Indians didn’t stop them and paid for it.

“We knew coming in that their game comes through the play-action,” Plack said. “It’s all built into the same thing with a lot of run-action. We were ready for that ... not as much as we wanted to be.”

Gateway (12-2) scored on touchdown passes of 35 and 61 yards to build a first-half lead, which it desperately had to cling onto in the second half.

The win gives the Gators seven titles in program history and two in the last three seasons, also winning in 2017. It also sends them into the PIAA semifinals against Archbishop Wood next weekend. Archbishop Wood beat Gateway in the state title game two years ago.

The subtle play-action used by the Gators was enough to cause the aggressive Peters Township (12-2) defense to pause, which created opportunities downfield.

The deciding touchdown for Gateway – a one-yard rushing score from Jay Johnson – was set up by a 70-yard fake reverse. Johnson’s touchdown gave the Gators a 21-10 lead with 8:10 left in the third quarter.

Peters Township then got life from its defense. Ryan Magiske intercepted a pass and returned it to the Gateway 13-yard line with three minutes left in the third quarter. Less than one minute later, Magiske split the defense for a 10-yard touchdown run.

Magiske had 13 carries for 45 yards and two touchdowns.

A 10-play drive by the Indians in the first few minutes of the fourth quarter led to kicker Andrew Massucci making a 33-yard field goal to trim the deficit to 21-10 with 8:10 remaining.

Peters Township had two more possessions, both starting inside its 10-yard line, and went three-and-out each time as Gateway dared the Indians to throw by sometimes putting eight players in the box.

“That’s kind of who we are,” Don Holl said. “Some would call it high risk, high reward. It’s hard to beat guys in tough coverage. (Peters Township) has great players and got us a couple times but we will live with those. We think the majority of the time we will be successful and limit the other things you can do.”

Logan Pfeuffer completed 10 of 19 passes for 247 yards for the Indians. A 33-yard screen pass to Josh Casilli led to a 29-yard field goal for Massucci as the first half expired, trimming the Gateway lead to 14-10.

Both of the Gators touchdowns in the first half came off big plays. Quarterback Bryson Venanzio took advantage of a broken coverage to find a wide-open Chamor Price for a 35-yard touchdown on its opening possession of the game. In the middle of the second quarter, Gators wide receiver Patrick Body got behind a defender and hauled in a 61-yard touchdown pass from Venanzio to give Gateway a 14-7 lead with 6:28 left before halftime.

“I know the weather wasn’t ideal for throwing the ball, but we felt maybe to attack this defense, with the way they morph in the back end and are good with run reads, was to try and suck them up,” Holl said. “(Peters Township) is great at diagnosing plays because they are well coached and have good players.”

Venanzio finished 18-for-28 for 242 yards and the two early touchdowns. Davis didn’t come back into the game after tweaking his ankle on the 70-yard run early in the third quarter. After being limited to seven carries for 16 yards in the first half, he finished with 87 yards on 10 carries.

“That’s their offense. That’s our offense,” Plack said of the big plays. “They made one or two more big plays than us. That put them in good position. They are a big-play team with athletes and were able to hit a couple things on us.”

Luke Campbell has been handling a multitude of tasks since joining the Observer-Reporter in 2015, following his graduation from Waynesburg University. He graduated from Waynesburg with a bachelor’s degree in sports broadcasting and information.