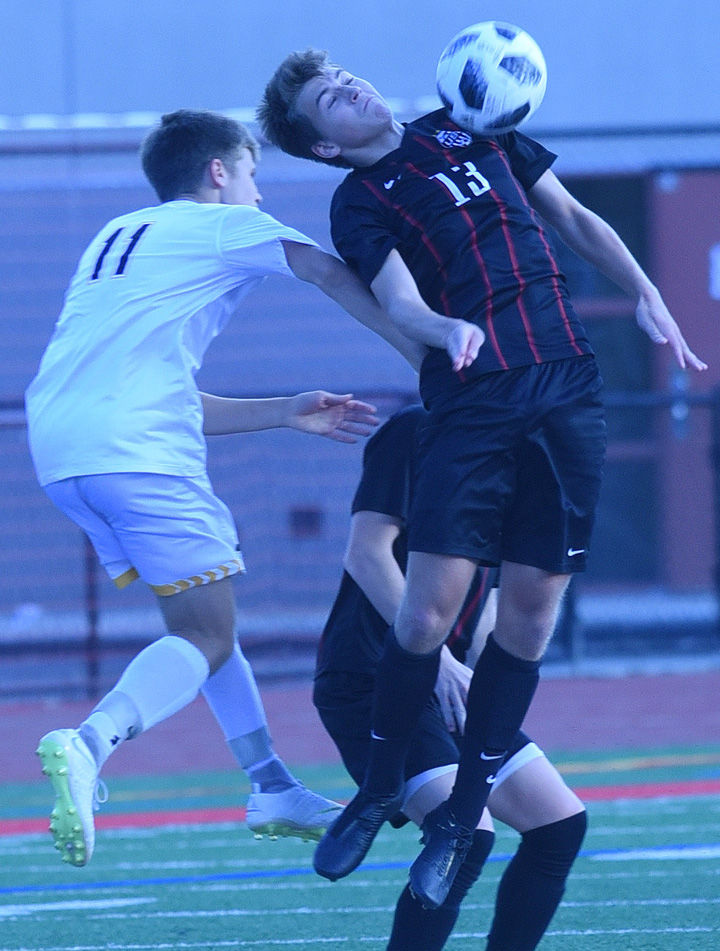 Mitch Friday (13) heads the ball away from Jacob Hopkins during Upper St. Clair's 2-0 win against Blackhawk in the first round of the WPIAL Quad-A boys' soccer playoffs. 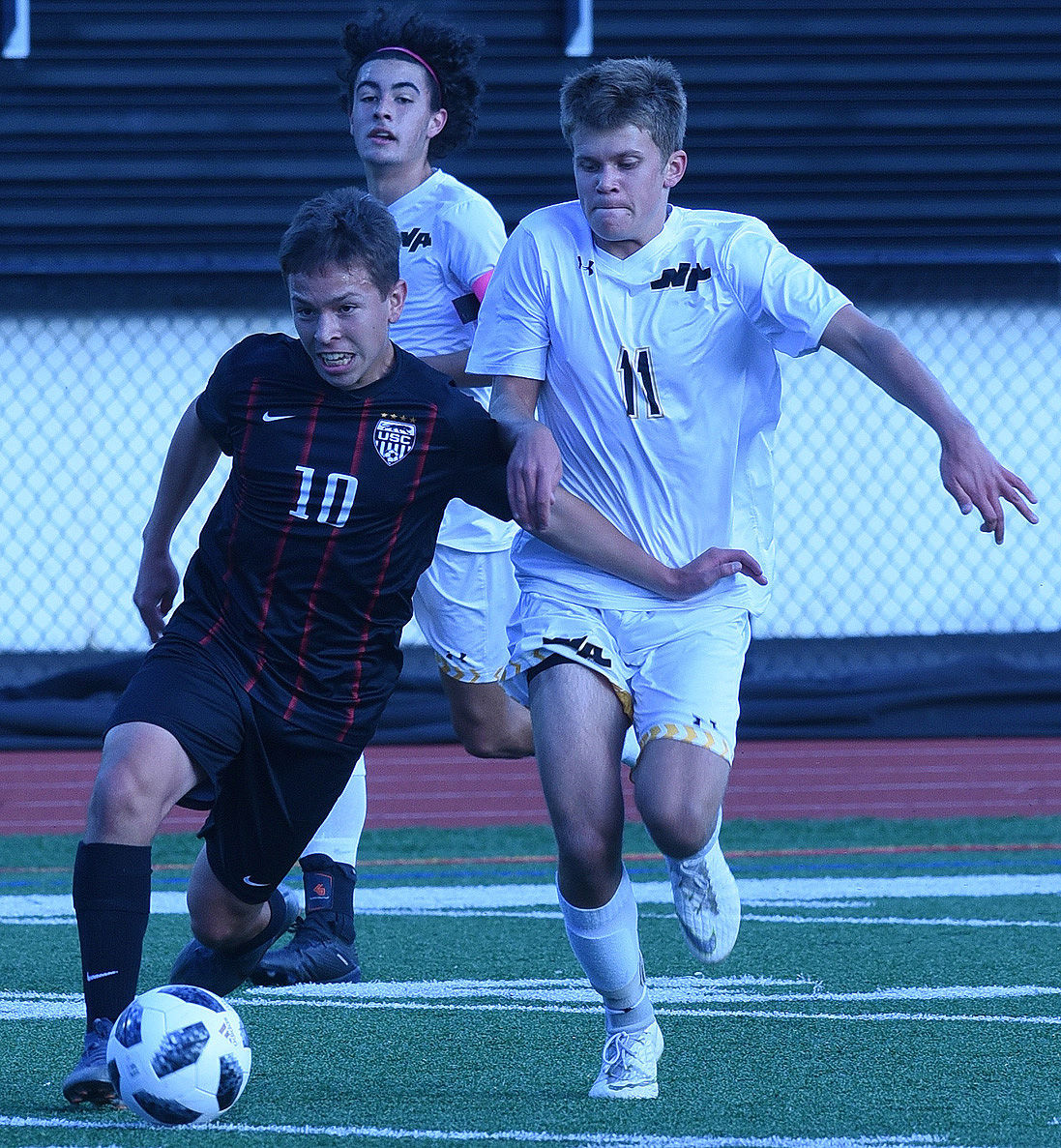 Jack Myers (10) fends off Jacob Hopkins as he drives to the goal. During Upper St. Clair's 2-0 victory against Blackhawk, Myers scored in the game.

Mitch Friday (13) heads the ball away from Jacob Hopkins during Upper St. Clair's 2-0 win against Blackhawk in the first round of the WPIAL Quad-A boys' soccer playoffs.

Jack Myers (10) fends off Jacob Hopkins as he drives to the goal. During Upper St. Clair's 2-0 victory against Blackhawk, Myers scored in the game.

Mt. Lebanon needed a hand to keep its soccer title hopes from sinking and Bulter unwittingly provided one.

With 70 seconds remaining in regulation in a WPIAL quarterfinal playoff game on Oct. 23, the Golden Tornado committed a handball violation and the Blue Devils took advantage. They exploded for three unanswered goals, defeated Butler, 3-1, and saved their 14-4-1 season.

Trailing 1-0 with 1:10 to play, Lebo advanced all of its players, including goalkeeper Steven Vines. With that many players in the box, Butler committed the foul and Giuseppe Croce promptly placed the penalty kick into the net to tie the contest.

“There was a lot of traffic in there so I couldn’t see what it was,” Lebo coach Bill Perz said of the handball call. “I’m just glad Giuseppe stepped up and was cool under the moment and got it done.”

Danny Simboro put the exclamation point on the triumph with the final tally.

The triumph netted the Blue Devils an opportunity to challenge for a spot in the WPIAL championship game set for Nov. 2 at Highmark Stadium. Lebo battled Seneca Valley (14-3-1) yesterday in a semifinal contest at Moon.

“Butler made his work for every second. They were really organized. An athletic team,” Perz said. “We had to throw everything at them to get back in it.”

After Carson Knight gave the Golden Tornado the lead midway through the first half, Lebo attacked, particularly in the second half where they held a 15-9 advantage on shots, especially on several back-to-back corner kick chances.

“They capitalized on an opportunity in the first half and then did a really good job of clogging up the middle. We were having a hard time breaking that down.

In the second half we did a better job of getting the ball wide and that let us get numbers forward. We had that hope. We had that faith,” Perz said of it only being a matter of time before Lebo punched a goal into the net.

While the Blue Devils received a first-round bye in the playoffs as the tournament’s No. 2 seed, they realize each opponent would be of the caliber of Butler.

While the Panthers defeated North Allegheny, 2-0, in the first round, they succumbed to top-ranked Plum, 4-0, in the quarterfinals.

Against NA, the Panthers snapped a scoreless contest five minutes into the second half on a goal from 25 yards out by Cyrus Khani off a corner kick.

With 36:06 left in the game, Jack Myers sealed the victory with his tally.

With 26:33 remaining in the game, Nolan Finkbeiner deflected a throw-in and headed it into the net for the lone score and to preserve the Cougars’ nine-game winning streak.