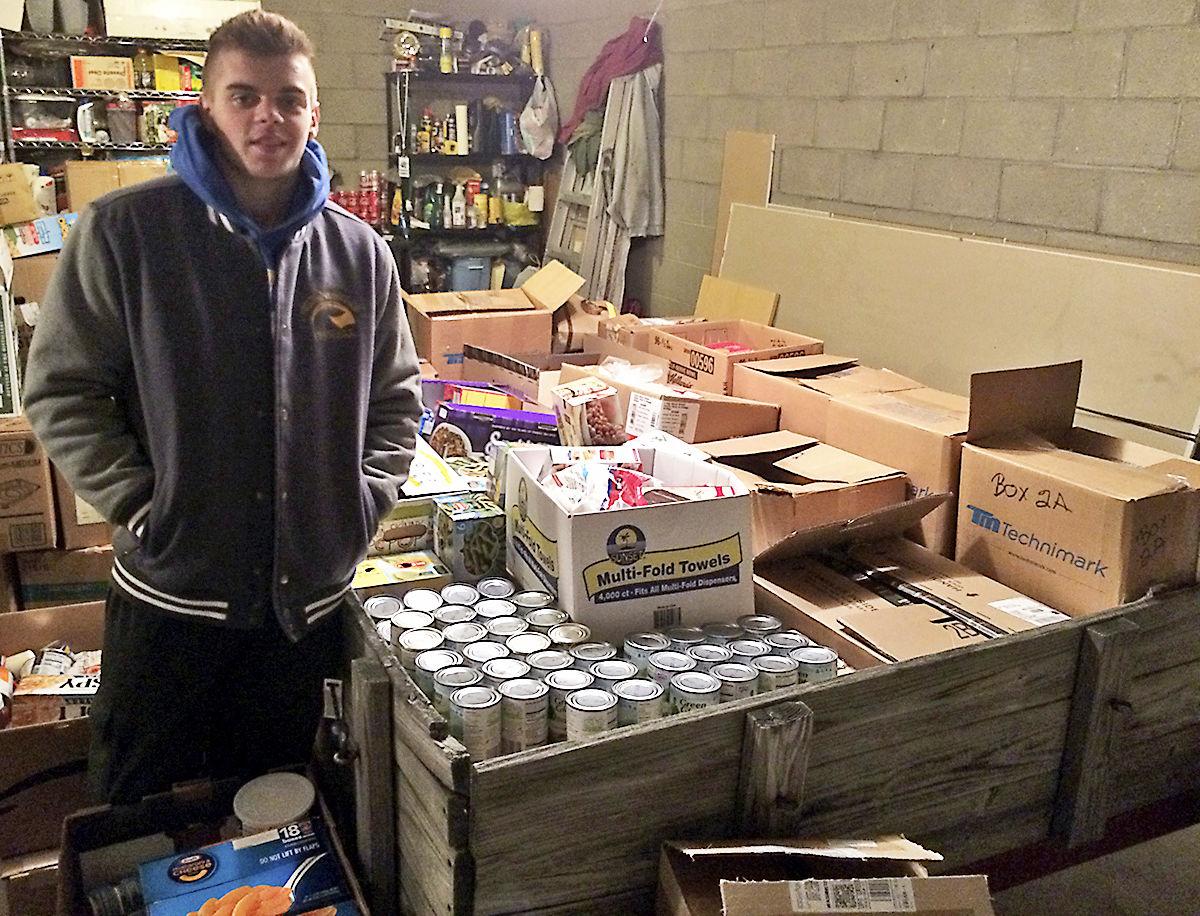 Drew Engel stands beside the donated items he collected for the Canonsburg Food Bank. 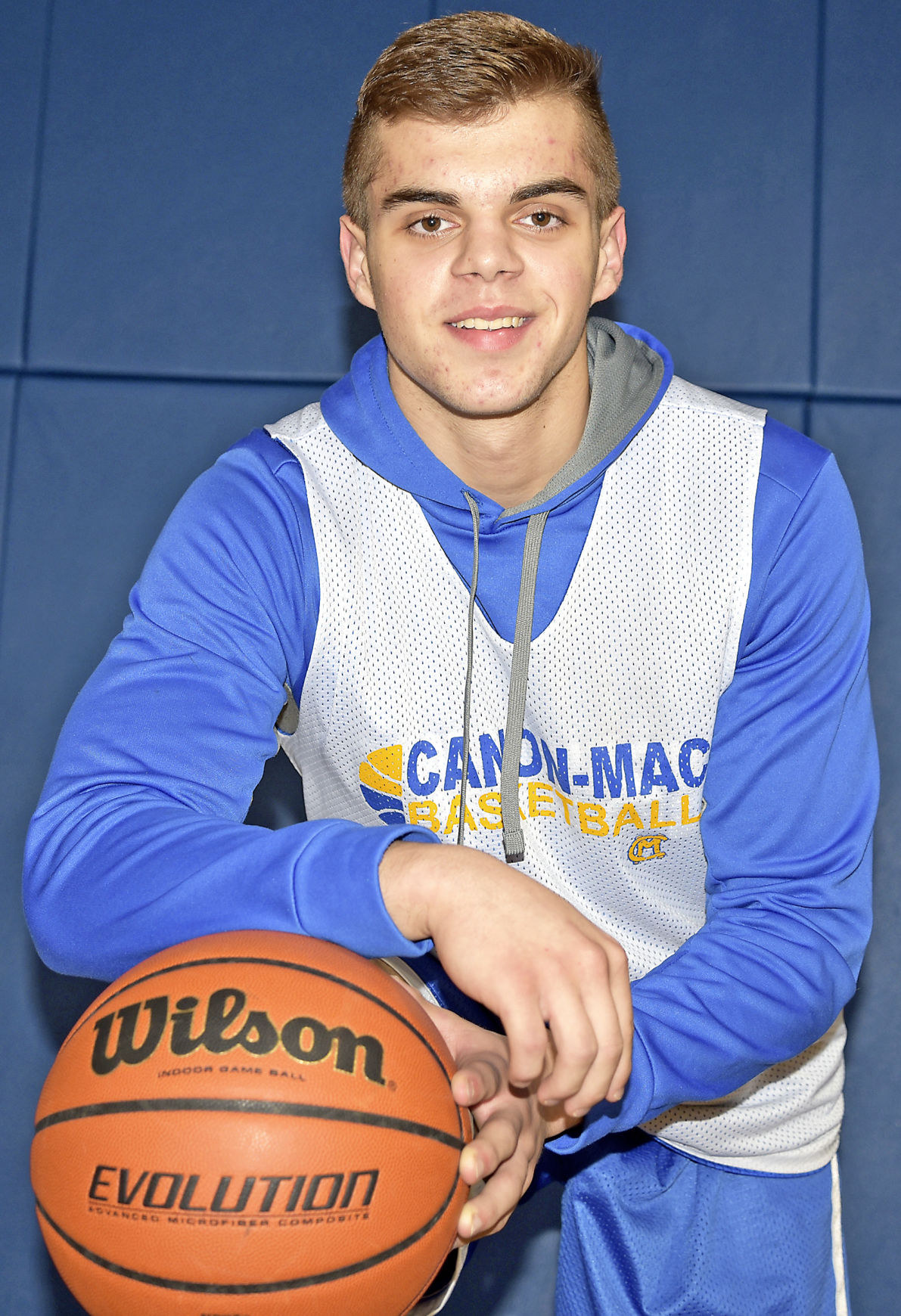 Drew Engel stands beside the donated items he collected for the Canonsburg Food Bank.

Hungry, Drew Engel peered into the well-stocked pantry in his family’s kitchen. Disgusted, he slammed the door shut and yelled, “There’s nothing in here to eat.”

The response drew a stern rebuke from his mother, Linda. She works in the Canon-McMillan High School cafeteria and routinely volunteers at the Canonsburg food pantry.

“Basically, she said I didn’t know how fortunate I am, and that there were kids out there, right in our community, that don’t have what I have,” Engel said of the incident that occurred four years ago.

Engel admitted Mom was right. They did have food. The shelves were stacked. “Just with stuff I didn’t like,” he said.

Today, the shelves are stuffed with more stocks than Engel can imagine. Sparked into service, he has collected nearly 15,000 items for the community food bank. From the time he sheds his football uniform in early November until the start of the basketball campaign and before the Christmas break, Engel emails prospective donors and makes announcements over the public address system at school.

When he started the drive as an eighth-grader, he collected 800 items, including clothing. Each year, he has more than doubled his donations, topping out at 7,380 contributions to the food bank this past collection period. In 2018, the challenge is to exceed 9,000.

“It’s not all me,” said Engel, who drafted the ad copy for the flyers and emails. “A lot of people donated. I’ve been surprised and happy with how it’s turned out and has helped the community.”

While delighted, too, Michael Evans is not shocked by the efforts. The Canon-McMillan football coach describes Engel as an “unbelievable person” who helps whenever he can.

“Drew has it all. High character,” Evans explained. “He is a strong student, good athlete and a very good person. The kind of kid you love to coach. He wants to be perfect. He is motivated and competes in everything he does.”

For two seasons, he has competed on the gridiron for the Big Macs. As a receiver, he has 48 receptions for 750 yards and nine touchdowns. He averages 15.6 yards per catch. As a defensive back, he has racked up 60 solo and 11 assisted tackles. He has intercepted eight passes and managed six tackles for loss.

“Drew has certainly helped us on the field but he also helps draw people to the program,” Evans added of Engel’s charisma. “The team looks up to him and he is in an outstanding position to lead this team in 2018. More importantly, he is an outstanding example of what a student-athlete is supposed to be in the classroom, on the field and socially. Drew wins at everything he does.”

On the basketball court, Engel is also a proven winner. The 6-1 guard has helped the Big Macs to their best season. Engel is averaging 8.5 points, 5.5 rebounds and 1.3 assists per game.

“Drew means a lot to our program on and off the court,” said C-M floor boss Rick Bell. “On the court, he is one of our more consistent shooters. He is also our most physical player. Off the court, Drew is an excellent role model. He excels in the classroom and the community as demonstrated by his work for the community food bank.”

Though just 16, Bell noted, Engel is mature beyond his years. His family, not just his mother, has played a keen role in that regard.

Thanks to his father, Engel developed pride in his work and a strong ethic. Mark Engel works for the Perryman Company in Houston, making artificial joints, like hips and knees. Because his parents died when he was 17, the elder Engel could not afford to go to college but he did raise enough money working to help fund higher education for his sister, Lisa.

“My dad’s job is precise and it’s a detailed process. He works hard, day in and day out, just for me to have what I have,” Engel said. “I understand and respect that.”

Engel appreciates his grandparents Linda and Butch Rozanc, both of whom are deaf. Thanks to his mother, he has learned sign language so he can communicate with them. And, his aunt, Janet Rozanc, instilled her optimism in Engel before she passed away. “She was the most upbeat person I knew. She never let you know that she was in pain. She was one of my best friends.”

His childhood chums are the reason why he participates in sports. He started playing flag football in first grade. He continued through the travel and Little Mac programs while picking up recreation basketball.

But battles on the gridiron are where Engel will long leave his mark as he is being recruited by a number of institutions. His 3.85 GPA is attracting Dartmouth, Penn and Lehigh. Toledo and Kent State are also interested in Engel. He plans to pursue a career in business management or marketing. Perhaps one day, he will own a business.

Whatever his pursuits, Engel promises he will persist in his philanthropic endeavors.

“There’s a food bank out there wherever I go. There is always someone in need,” he said. “It makes me happy and glad that I am able to help give something back to my community. People don’t know how much it helps. It makes me excited and happy to know that people don’t have to starve because we can help make things better for people in our own communities. It means a lot to give back. I can’t explain it in words.”

Through witness, he can. The first time, Engel helped at the food bank with his football friends. They lent a hand to an elderly lady. When they placed the boxes of food into her car, she began to cry. She turned and said, ‘Hopefully, next year, I can give out food and not take.’

“That hit home,” Engel said. “That showed me what people go through. It’s drove me to do this and more.”

Turning philosophical, Engel added, “Sports are great but they can’t affect things. Sports can’t put a meal on a table at night. For sure, there are more important things than any victories and things so much bigger than sports.”

Color: Blue. “Because I’ve grown up around it. Second would have to be gold.”

Dream Destination: Los Angeles. "I know it's not very exotic but I went there to see the Rose Bowl when Michigan State played Stanford in the 100th anniversary game and it was one of the greatest experiences, especially because I went with one of my best friends, Dom Dodson and his dad, Will.

People might be surprised to know this about you: "I know sign language. My grandparents are deaf so my mom taught me how to sign since I was born."

With whom would you like to have dinner: My aunt, Janet Rozanc. "She was the most upbeat person that I knew. She had many things wrong with her, including a rod down her back, and she was in a lot of pain, especially when she got ill, but she never let you know it. She was one of my best friends."

What has sports taught you: If you work hard and work together as a team, then you can accomplish things. It may not necessarily be a win but you will reach something else. It's like the saying 'if you shoot for the moon, you may land among the stars. In other words, ultimately, you will succeed."