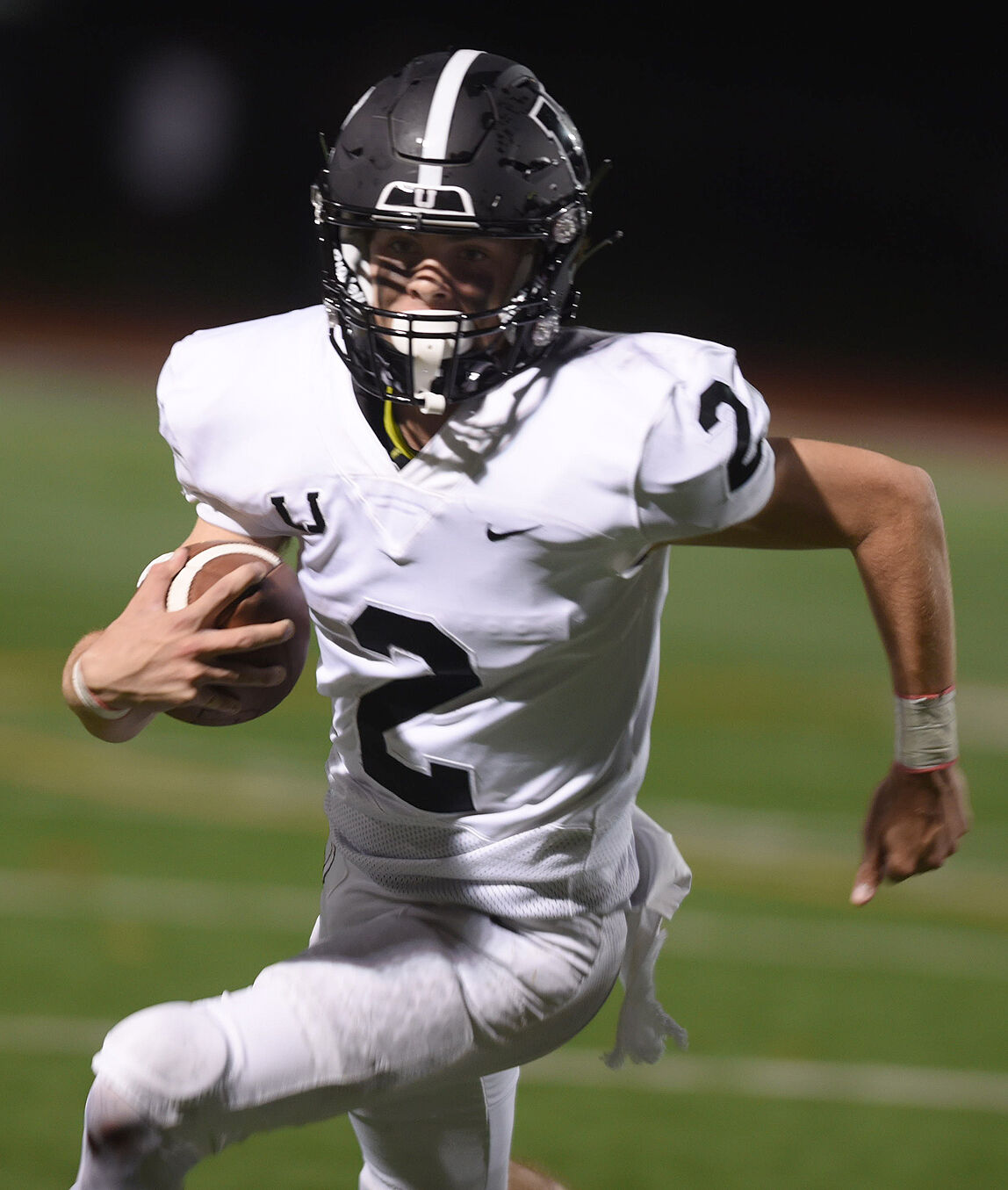 Mateo Cepullio has Upper St. Clair on the move after his switch to quarterback. The senior had ranked among the receiving leaders in the WPIAL when he took over the signal calling for the Panthers two weeks ago. 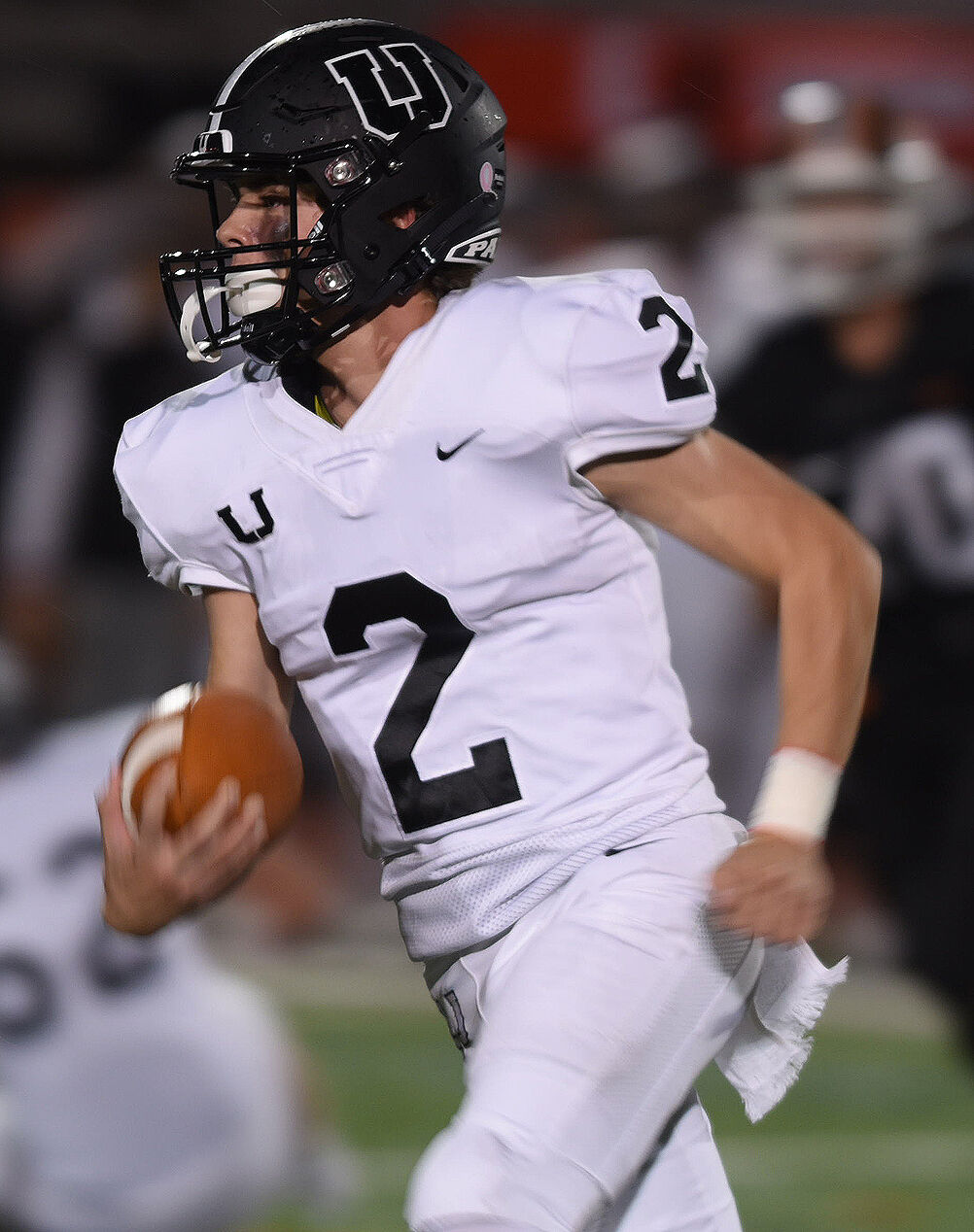 Mateo Cepullio picks up yardage during Upper St. Clair's 21-14 win against Bethel Park. Cepullio tossed a touchdown pass to James Smith with 1:22 left in the fourth quarter then returned a blocked field goal 85 yards for the game-winning score with 22 seconds left in the contest.

Mateo Cepullio has Upper St. Clair on the move after his switch to quarterback. The senior had ranked among the receiving leaders in the WPIAL when he took over the signal calling for the Panthers two weeks ago.

Mateo Cepullio picks up yardage during Upper St. Clair's 21-14 win against Bethel Park. Cepullio tossed a touchdown pass to James Smith with 1:22 left in the fourth quarter then returned a blocked field goal 85 yards for the game-winning score with 22 seconds left in the contest.

“Mateo seems to have that ability to always keep his head when everyone around him is losing theirs,” he said.

Cepullio engineered USC’s recent comeback victories in consecutive weeks to cap a 6-4 regular season and hand the Panthers the No. 6 seed in the WPIAL Class 5A playoffs.

He tossed two, fourth-quarter touchdowns to favorite receiver Aiden Besselman on Oct. 22 as the Panthers overcame a 13-point deficit to defeat South Fayette, 31-28. In the overtime triumph, he passed for 155 yards and caught four passes, including one for a 47-yard score.

With 22 seconds left in a 21-14 come-from-behind win against Bethel Park on Oct. 29, Cepullio returned a blocked field goal attempt for 85 yards and the decisive score. Cepullio completed a fourth-down, 24-yard pass to James Smith for the tying touchdown with 1:22 remaining in the contest. He also had an interception on defense.

“People may not realize this but I am the calm guy in the group,” Cepullio said. “When everybody is getting all nervous and anxious about a game or before a big drive, I will say something like ‘this is what we are made for’ or ‘we can do this’ to my teammates. Not many people would know that I would be so calm.”

Blame that on baseball. A center fielder, Cepullio, who has committed to play baseball at Akron, excels on the diamond.

This past spring, he batted .354 with an on-base percentage of .492, 11 runs and 14 stolen bases as he led the Panthers to the quarterfinals of the WPIAL 6A playoffs.

“In baseball,” said Junko, who was the catcher on USC’s 1992 WPIAL championship team, “you must overcome a great deal of adversity.

“Two-for-5 is a great day at the plate but it also means you failed three times. Overcoming those failures and just focusing on the current pitch helps to keep you in the moment. Mateo is a football player that stays in the moment and keeps his focus on the next play.”

Those qualities translated spectacularly for the Panthers on the football field.

As a junior, Cepullio ranked No. 2 on the team behind current Yale freshman David Pantelis in receiving with 31 receptions for 432 yards. This fall, he ranks among the top receivers in the WPIAL with 32 catches for 322 yards in eight games.

“Mateo is probably the best center fielder in the WPIAL because of his ability to cover so much ground,” said Junko. “As a receiver he has made some catches on ball we never thought he would be able to run down.

“Mateo has great quickness, speed and, regardless of what position he is playing he has great field vision. He is a relentless competitor that cares deeply about his teammates and coaches. He is a joy to coach because he does not ride the highs and lows of the game.”

That even-keel approach prompted Cepullio’s switch to quarterback the past two weeks. The move sparked an otherwise sputtering offense. In two games, he has passed for 220 yards and three touchdowns.

“I liked wide receiver. It’s a little bit like playing the outfield. Changing direction and tracking the ball,” Cepullio said, “but I wanted to do whatever I needed to do to help the team. Coach Junko told me, he needed someone to make plays for the team and it’s ended up working out for us.”

The Panthers entered their playoff game Nov. 5 against Fox Chapel hoping to ride the thrill of consecutive down-to-the-wire wins to another victory.

“I have never experienced anything like the past two games in my life. It’s been like something out of a movie,” Cepullio said. “Hopefully it helps us continue to climb and get to Heinz Field. Everything seems to be coming together and clicking for us. Obviously there are very good teams in the playoffs but I think we can take this pretty far.”

Book: “Well the last thing I read was Beowulf and that was not the best (for me) but I think Harry Potter are great books. I finished reading one of them.”

Who would play you in a movie: “I’d like to say Leondardo DiCaprio.”

Person you would like to have dinner with: My aunt Dede (Deborah Ryan). She was a special part of my life as kid until she died of breast cancer. I wear a pink wrist band around my ankle in memory of her.”

Life-lesson from sports: Confidence. “If you it in yourself and your teammates, then nothing can stop you.”

In 15 years, I will be: Hopefully playing baseball in the major leagues.

Mateo Cepullio was not the only star in Upper St. Clair's 21-14 win against Bethel Park.

Ethan Hiester submitted a standout performance with 133 yards rushing on 19 carries. He was also credited with the block on BP's 30-yard field goal attempt that resulted in Cepullio's recovery and return for the game-winning touchdown.

The win was costly, however, as USC lost two-way lineman Mark Banbury to a knee injury.