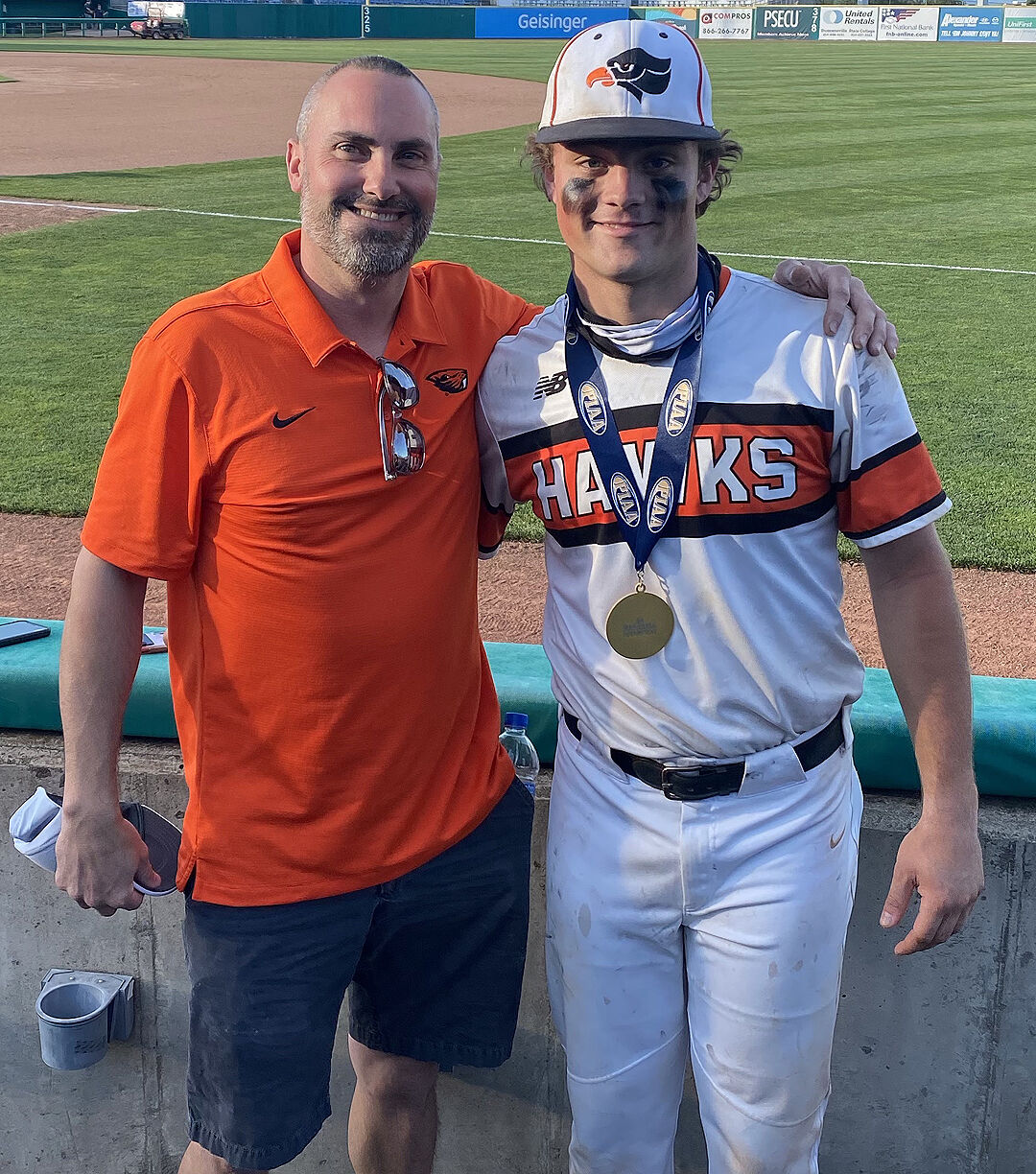 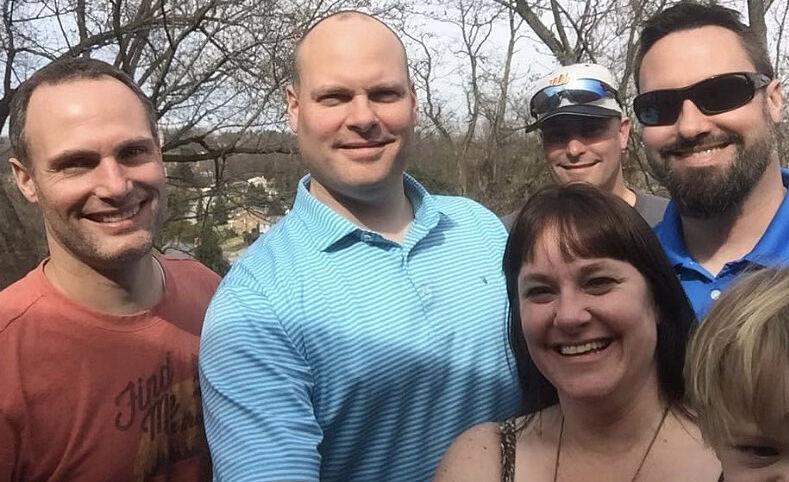 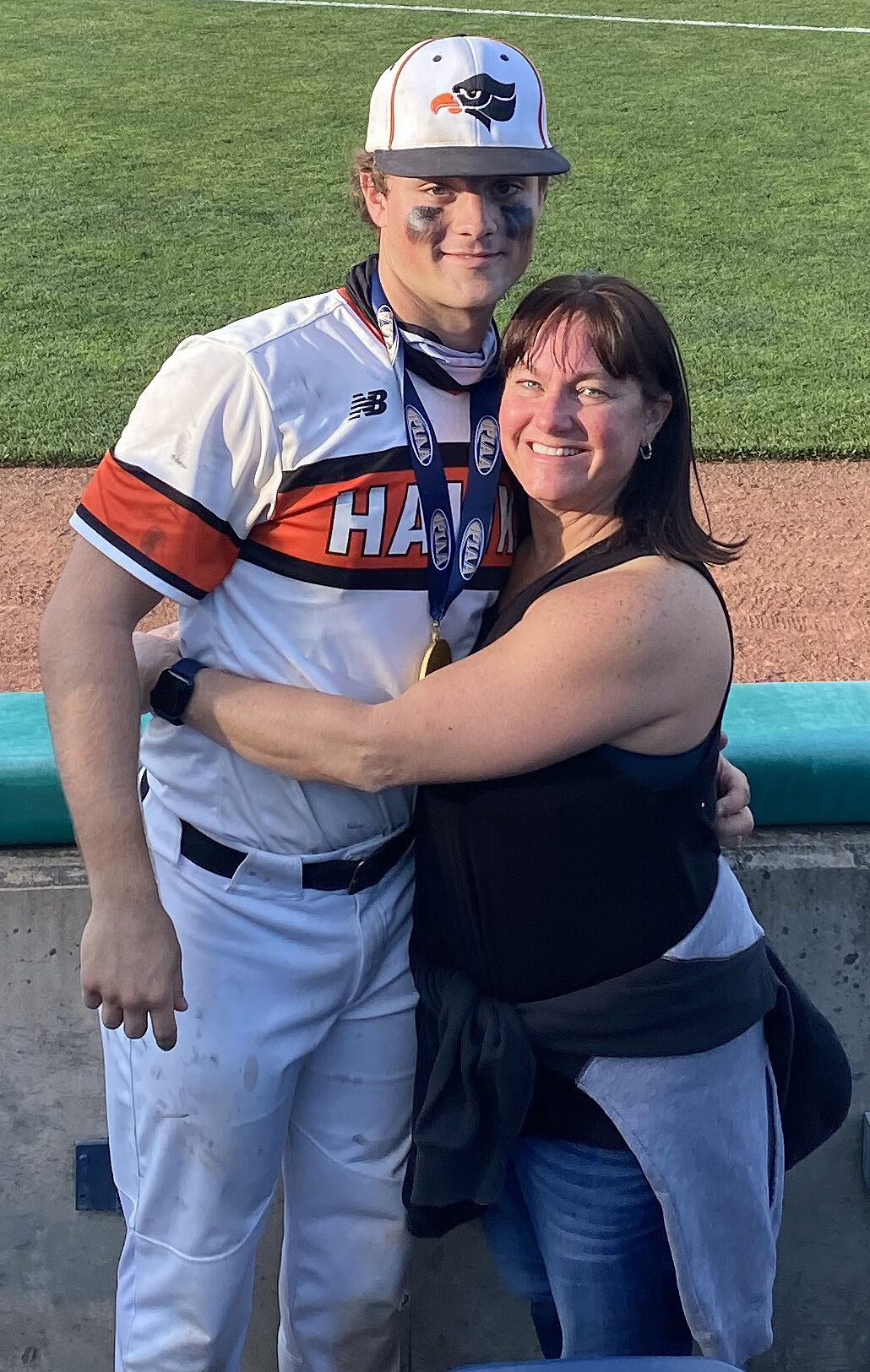 Blade Myers of Central Mountain slides into third base on a steal before Bethel Park’s Cody Geddes can apply the tag during the second inning of a PIAA Class 5A semifinal game. 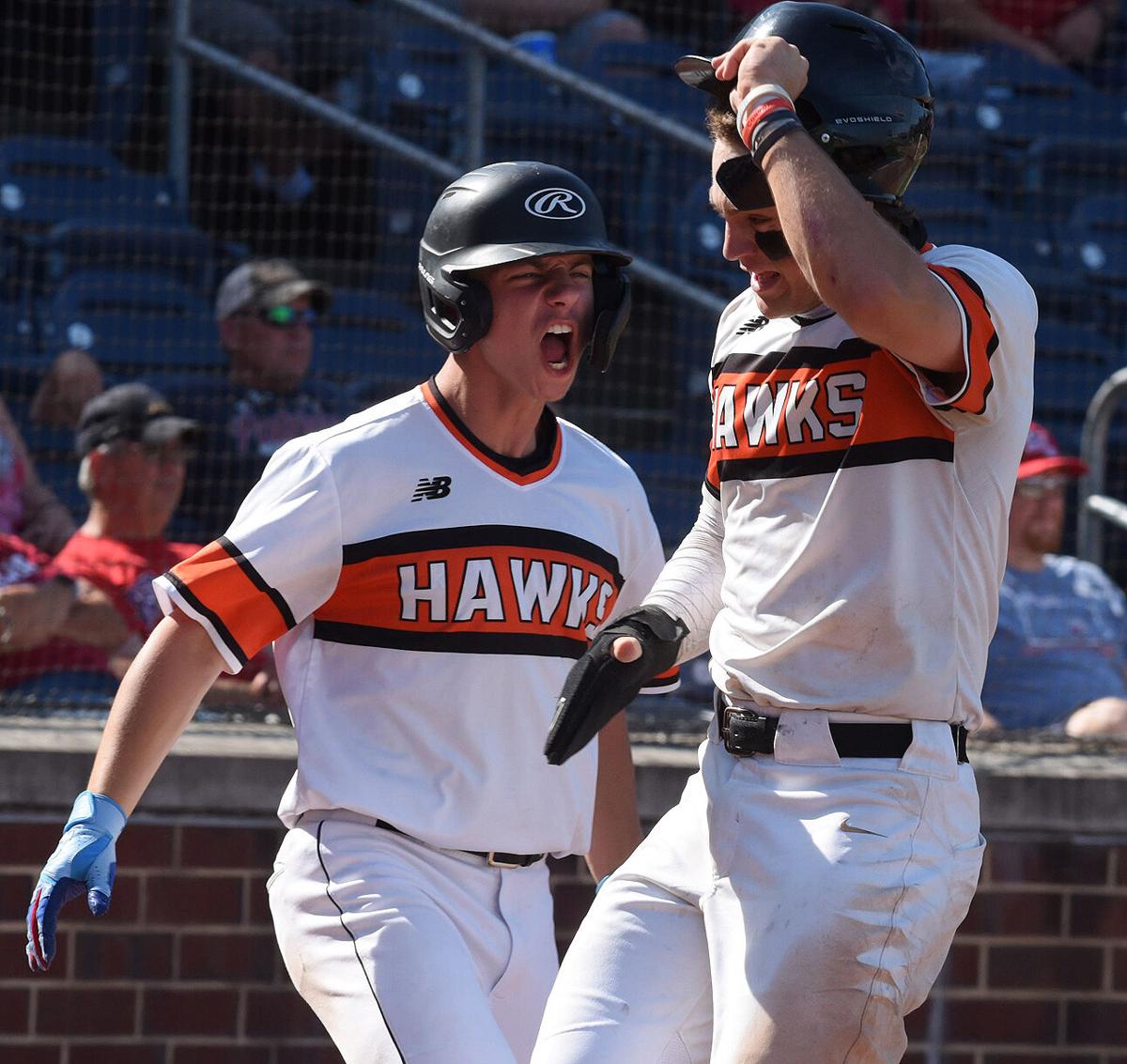 Ray Altmeyer, left, celebrates with Cody Geddes after he tagged a two-run triple and scored a run in Bethel Park's three-run first inning of the state championship game. 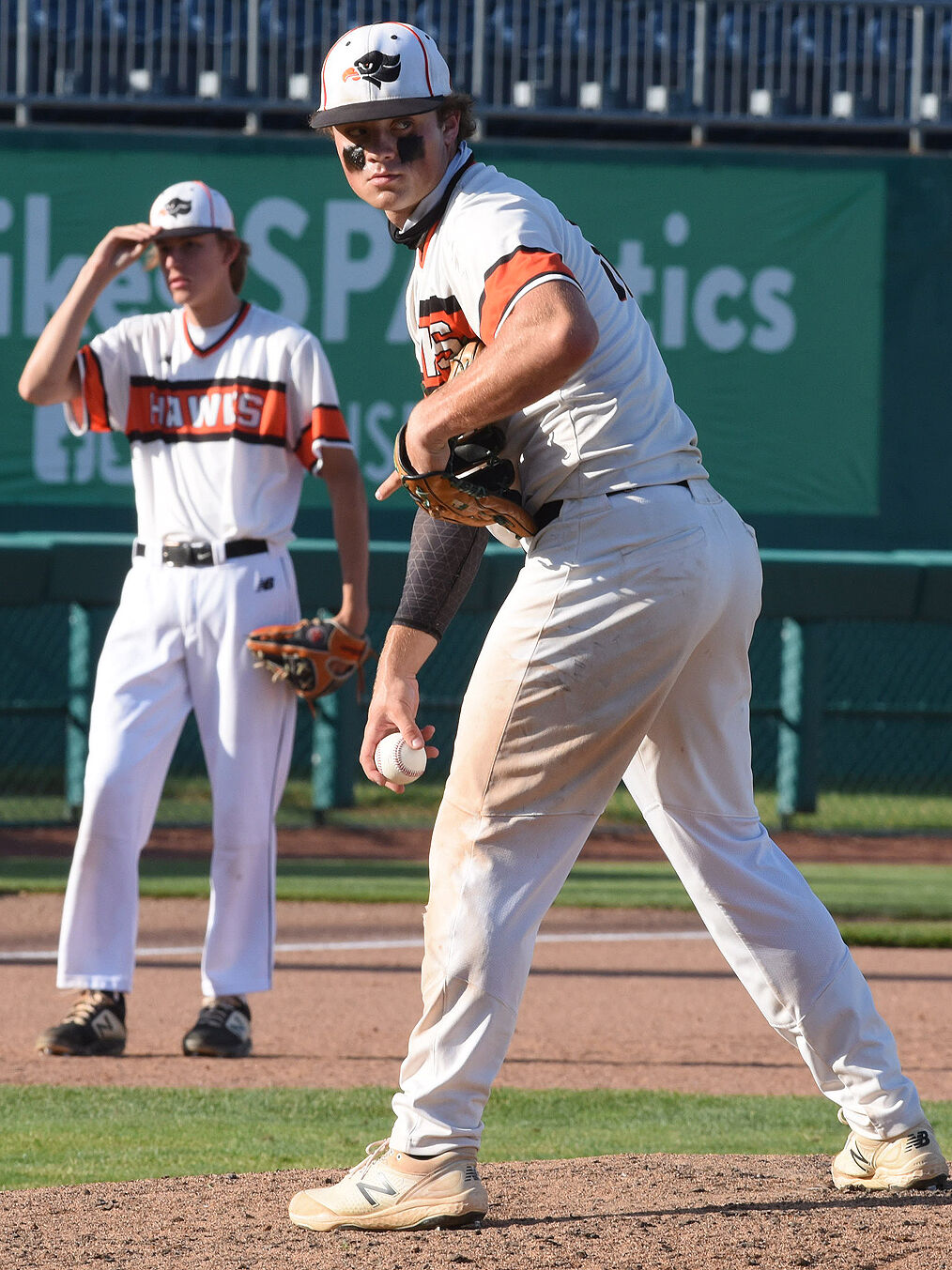 Cody Geddes looks to first base before delivering a pitch to home plate during the seventh inning of the PIAA Class 5A championship game. 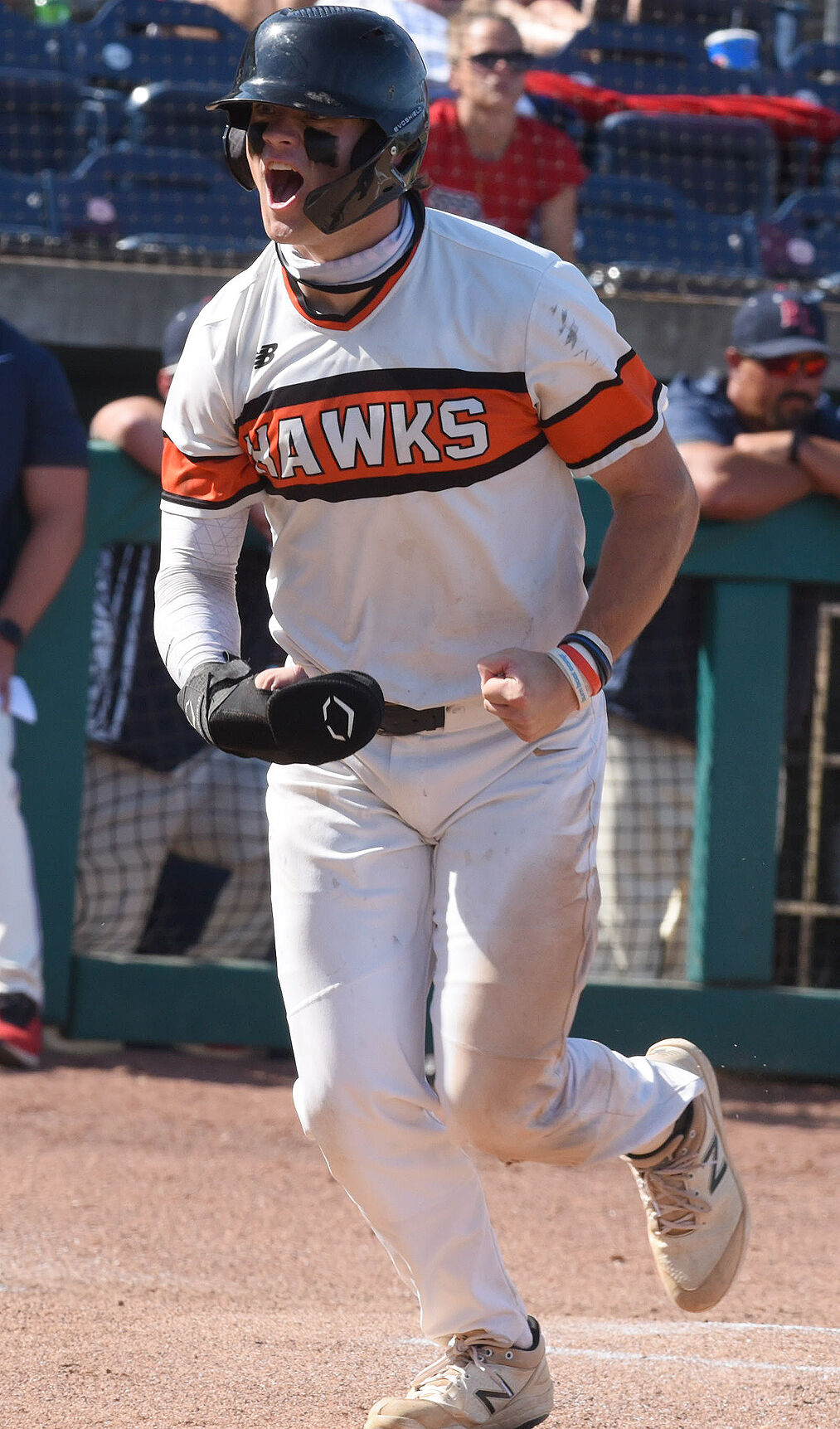 Cody Geddes celebrates after scoring a run in Bethel Park’s 4-2 win against Red Land in the PIAA Class 5A championship game.

Blade Myers of Central Mountain slides into third base on a steal before Bethel Park’s Cody Geddes can apply the tag during the second inning of a PIAA Class 5A semifinal game.

Ray Altmeyer, left, celebrates with Cody Geddes after he tagged a two-run triple and scored a run in Bethel Park's three-run first inning of the state championship game.

Cody Geddes looks to first base before delivering a pitch to home plate during the seventh inning of the PIAA Class 5A championship game.

Cody Geddes celebrates after scoring a run in Bethel Park’s 4-2 win against Red Land in the PIAA Class 5A championship game.

Which member of the White family was the best player?

Brothers Craig, Curt, Corey and Clarke White ruled the diamond from 1983 through 1997. Their nephew, Cody Geddes, dominates this generation. Cody tagged a two-run triple and earned a save on the mound as the Black Hawks defeated Red Land in the 2021 PIAA championship game played June 17 at Penn State’s Medlar Field.

“Let’s not go there,” said Craig of his family’s debate.

As a junior, Craig played on Bethel Park’s first WPIAL championship team in 1985, which also ended up losing in the PIAA title game. He excelled at Slippery Rock University then embarked on brief professional career with the Los Angeles Dodgers and Boston Red Sox. At age 52, he is now the general manager of Grand Vue Park in Moundsville, W.Va.

Craig said Corey and Clarke had the best “all-around talent” because of their strength and ability. He added Clarke was one of the smoothest infielders. Of his nephew, he said, everybody thought Cody would be good because when he picked up a ball he’d do things that nobody else in his age group could do.

“Work ethic is the key. Corey has to continue to put the work in,” Craig said. “I have seen people who were not as good as the star athletes but surpass them because of their work ethic.”

Corey laughed when asked who was the best of his family members to play the game.

“Those were fun years,” Corey said of his playing days. “I loved watching my older brothers win championships but it’s for others to decide who was the best.”

Corey is rooting, however, for Cody.

“We hope that he will be better,” he said. “You always want the next generation to be better. He’s on his way.”

Cody’s mother, Carrie, may be biased. The lone sister among four brothers, she played played softball for the Black Hawks from 1990-94 before competing at Gannon University. An outfielder, she played on BP’s 1993 WPIAL runner-up club. In addition to Cody, she had three other children, Carolina, 22, Courtney, 21, and Connor, 15.

“Everybody had unique talents,” she said. “It’s hard to chose.”

But that doesn’t mean Carrie doesn’t have her own opinion on the family debate.

“Honestly, it was me who was the best. As a package deal and what he brings to the table, then it’s Cody,” she said.

Cody was an anchor in the middle of the line-up Black Hawks’ lineup in 2021, batting .359 with a .448 on-base percentage thanks to his five doubles, three triples and one home run. He also drove in 26 and scored 24 runs.

“Cody seemingly always found a way to drive in runs when needed,” BP head coach Patrick Zehnder said. “He showed the willingness to adapt and make adjustments to become one of our top hitters.”

“As a pitcher, he arguably has the best stuff on the team,” the coach added of his player who closed the seventh inning of the state title game. “Cody has the ability and toughness to succeed in that challenging role.”

Cody’s appearance in State College this year brought back memories for Corey, who also was a third baseman and a closer.

“I watched Cody warm-up and I could see he was ready,” Corey said. “When he hopped the fence out of the bullpen, I knew he had this.

“It takes a special person and mindset to be the guy who wants the ball in that situation. Cody wants to be that guy.”

Though neither Cody nor Corey said they were nervous, Carrie broke out in hives when her son took the mound.

“It was a little intense,” she said. “Cody loves a dramatic finish but he knew the job he had to do. He calmed down and relied on his fielders to do their job.”

Bethel Park’s 1988 championship game had one similarity with the 2021 contest ... the date. On June 17, 1988, the Black Hawks blasted Wilson, 13-6, in the Class AAA final played at Shippensburg University.

It was a different era 33 years ago. There were no cell phones, no text messages, no social media buzz about the team’s arrival back on campus, no police escort or welcome home celebration. Everything was in black and white, even the team’s photograph.

“It’s so different when you think about it,” said Curt.

Curt was a two-year starter at second base for the Black Hawks, when they won a WPIAL title and finished as runner-up in the state in 1987 and then lost the district crown only to win the PIAA trophy in 1988.

Curt played two seasons at the University of North Carolina-Wilmington before transferring to Slippery Rock. For the past 23 years, he has worked for JP Morgan on Wall Street. He has two sons, Griffin, 10, and Cooper, 7.

Technology did however enable Curt to stream a live-feed of the 2021 game onto his laptop computer.

“It was fun to watch. It gave me chills and brought back so many memories,” he said. “The team’s entire run rekindled connections and I was able to reach out to many teammates. When you win something like a state championship, you develop a special bond with the people you did this with. You remain connected and it’s part of your life forever.”

Curt felt connected to the 2021 squad but not necessarily because of his relative.

“It might be selfish to say, but part of me believes we gave these kids the confidence and knowledge that this was doable,” he said, referencing the 1988 team’s 10-7 loss to Plum at Pullman Park in Butler along with the 2021 team’s 2-1 loss to Franklin Regional at Wild Things Park in North Franklin Township.

“We made it real for them,” he said. “Cody would tell me, ‘yes, we heard about your team’ and that they were aware that our team (lost a WPIAL title but won at states).”

This year, Chalus finished 11-0. He was the pitcher of record in the PIAA final. Sophomore Evan Holewinski posted a 9-1 record.

“I feel it all starts with pitching,” said Curt. “Eric Chalus was phenomenal for that team. He and Evan put up amazing stats. When you move through the line-up there was a confidence about the players and they went about playing the right way.”

Clarke was a three-year starter at shortstop for the Black Hawks.

BP lost to North Catholic in the 1995 WPIAL championship game and to Seneca Valley in the PIAA tournament during his senior season in 1997.

Clarke, 42, played at Northeast Louisiana before transferring to Akron. While he works at Donati Florist in Bethel Park, he resides in Mt. Lebanon. He plays baseball in the Federation League and manages a team in the Daily New League.

“Sometimes Cody gets sick of hearing how well we did but he does a great job working to keep up with what we’ve done,” Clarke said. “Keeping hungry isn’t easy to do. But he seems to want to continue to work and grow.”

Because Cody is a junior, the rest of the White clan is in jeopardy of having their claims as the best in the family erased.

Cody is one of seven starters – three sophomores and four juniors – returning for Bethel Park in 2022.

“I don’t know if I was the best one,” said Curt, “but I always had (my gold medal) to bring up to everyone else. Whether Cody or any one else on the team, I am grateful for this to have happened and that they have a legitimate shot to do it again. It will be tough but with what they have returning, it’s a huge start.”

Corey said repeating as champions is easier said than done.

“The hardest thing to do is win the WPIAL and PIAA,” he said. “To do it back-to-back, well, you have to continue to work hard and get a little lucky down the road.”

“It’s nice to have that ring,” said Curt. “For me, in particularly, this championship is sweet because Cody is part of it. I can’t speak for the rest of my team, but from what I’ve experienced, every one on our team is rooting for this team.”