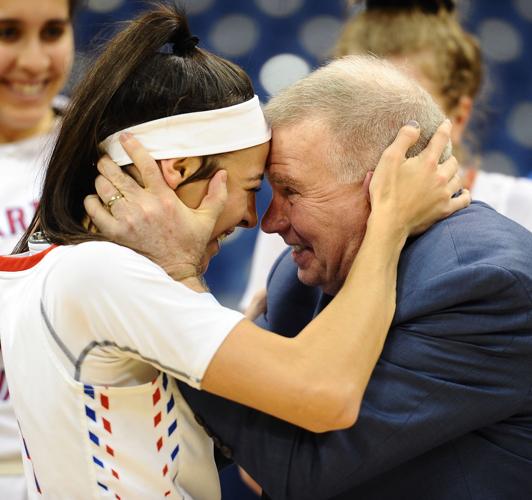 Megan and Tim McConnell saw eye to eye regarding how cool winning a WPIAL title was for a daughter and father. Coaching his children, which included T.J. and Matty, was one of the joys McConnell experienced while Chartiers Valley floor boss. 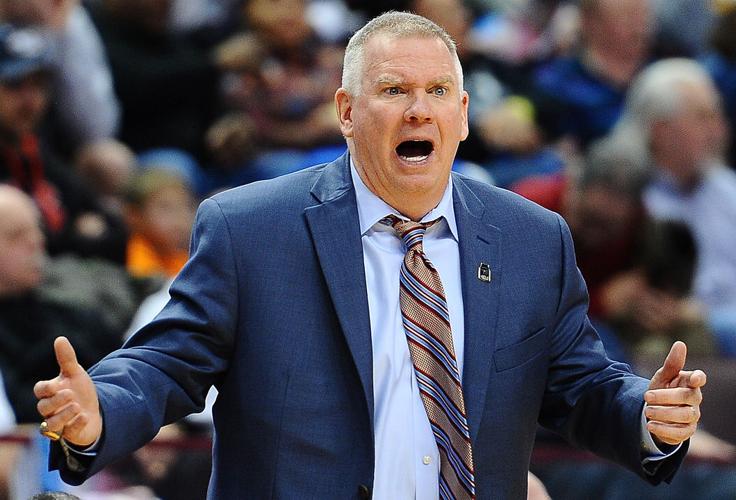 Tim McConnell reacts to a call during a Chartiers Valley basketball game.

Megan and Tim McConnell saw eye to eye regarding how cool winning a WPIAL title was for a daughter and father. Coaching his children, which included T.J. and Matty, was one of the joys McConnell experienced while Chartiers Valley floor boss.

Tim McConnell reacts to a call during a Chartiers Valley basketball game.

After 29 years, McConnell will no longer be a basketball coach at Chartiers Valley High School. He will, however, continue to be the school district’s transportation director.

“I have no plans on retiring. I might be old,” said the 57-year-old McConnell, “but I’m young at heart.

“In all honesty, the relationships that I have had with the (bus) drivers, administrators and people in the district make my job enjoyable. I love my job here and the people here make my heart feel good.”

Nevertheless there was an ache there. McConnell, who coached the Lady Colts for the past four years, wanted to pursue positions on the male side again. He spent 25 seasons as the boys coach, amassing more than 500 victories.

“My years at CV have been unbelievably great but I missed coaching boys,” McConnell said.

Not long after his resignation, McConnell was hired at the new boys coach at Bishop Canevin, a small Catholic school a 10-minute drive up the road from CV.

The Crusaders were two-time WPIAL champions and this year’s PIAA state winners under Gino Palmosina, who left to take a position at Moon. Palmosina was 75-24 during his four-year tenure.

“I’m excited about this new opportunity,” McConnell said. “I hope to keep the program moving in the right direction. My expectations will be that we work harder than our opponents.”

McConnell brings oodles of success to Canevin. His career coaching record is 662-153 with nine WPIAL titles and one state championship.

In 25 seasons as the CV boys coach, McConnell amassed a 552-146 record with six WPIAL crowns and 16 section banners. His teams also were PIAA runners-up twice and district runners-up five times. He reached 500 career victories faster than any boys coach in WPIAL history and ranks 14th on the all-time list for wins.

The past four years, McConnell coached the Lady Colts to record heights. They were 110-7 overall with four district final appearances, three WPIAL titles, three state championship appearances and one PIAA crown as well as a state record for consecutive victories.

“I really enjoyed coaching the girls. It was a great ride and I was lucky to experience it,” McConnell said.

After the 2022 campaign ended with a second straight loss to Cardinal O’Hara in the PIAA Class 5A final at the Giant Center in Hershey, McConnell started to reflect on his career.

“I got to thinking about how much I missed coaching boys basketball and I wanted to get back into it. I’m ready to take on the next challenge.”

When McConnell arrived at CV as a 27-year-old basketball junkie — he was a WPIAL runner-up as a point guard at Seton LaSalle in 1982 and a record-setting playmaker at Waynesburg College, the Colts had only won two playoff games in school history.

The victories though are second to the lives McConnell impacted. He treasures those memories.

“The friends and relationships I have built over the years are what’s most meaningful. It’s overwhelming to think of the young people I have impacted through basketball.” he said.

McConnell noted the many weddings and baptisms he has attended of former players through the passing years.

“That’s what’s most meaningful,” he said. “Getting calls from my players or seeing pictures of them with their babies in their arms.”

T.J. McConnell is the school’s all-time leading scorer with over 2,000 career points. A standout on CV’s 2010 PIAA runner-up squad, he plays in the NBA with the Indiana Pacers.

“Not many get to coach their own children. Seeing their success on the court and in life is the most rewarding thing for me and my wife,” McConnell said. “I cannot begin to describe how special those memories are.”

Many more memories are in the making at Canevin.

“I can’t wait to get started,” McConnell said. “I’m excited about next season and the next chapter in my life.

“I love this place,” he added of CV. “It’s sad to leave but I’m not ready to step back, relax and just enjoy life. Not yet.”