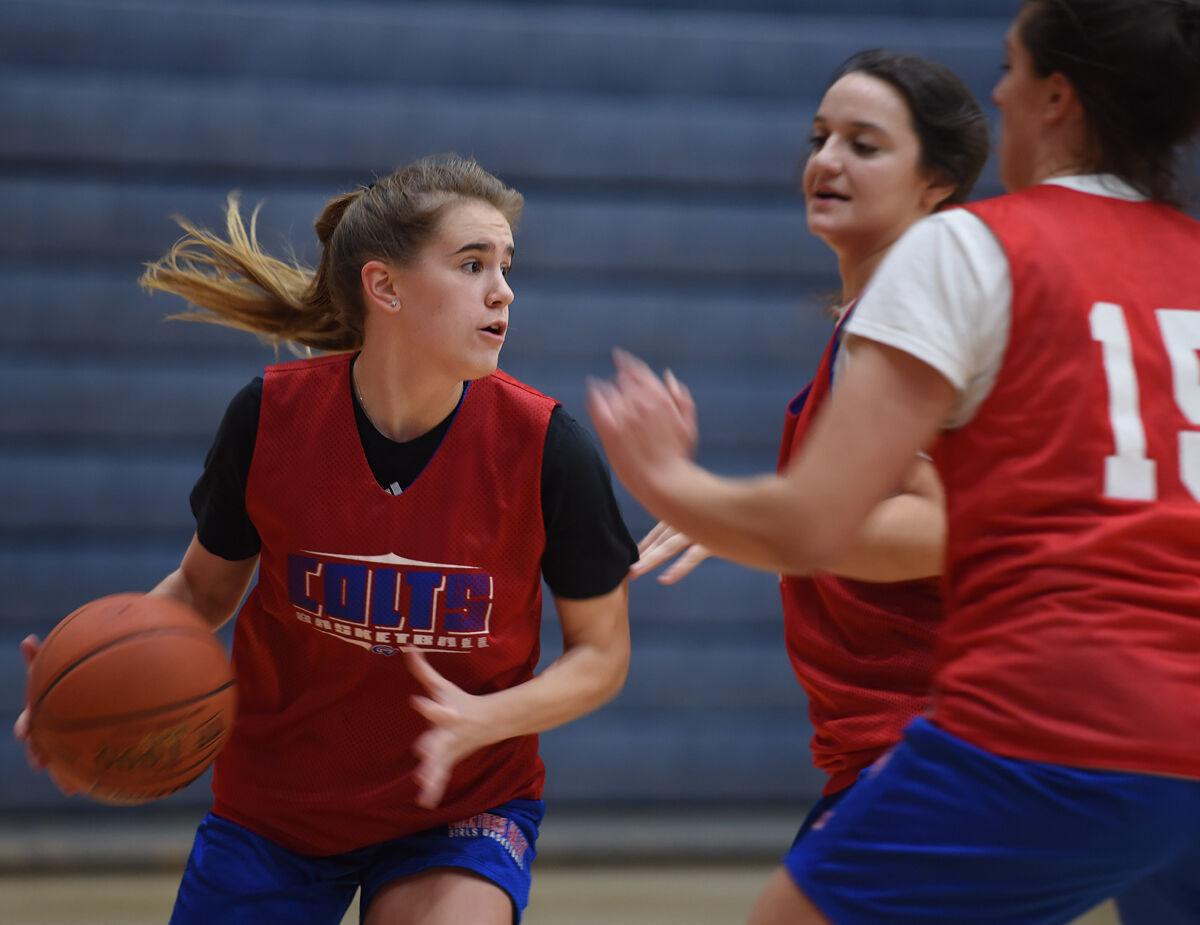 Marian Turnbull looks to dish off the ball after being double-teamed by a pair of defenders during Chartiers Valley girls basketball practice. 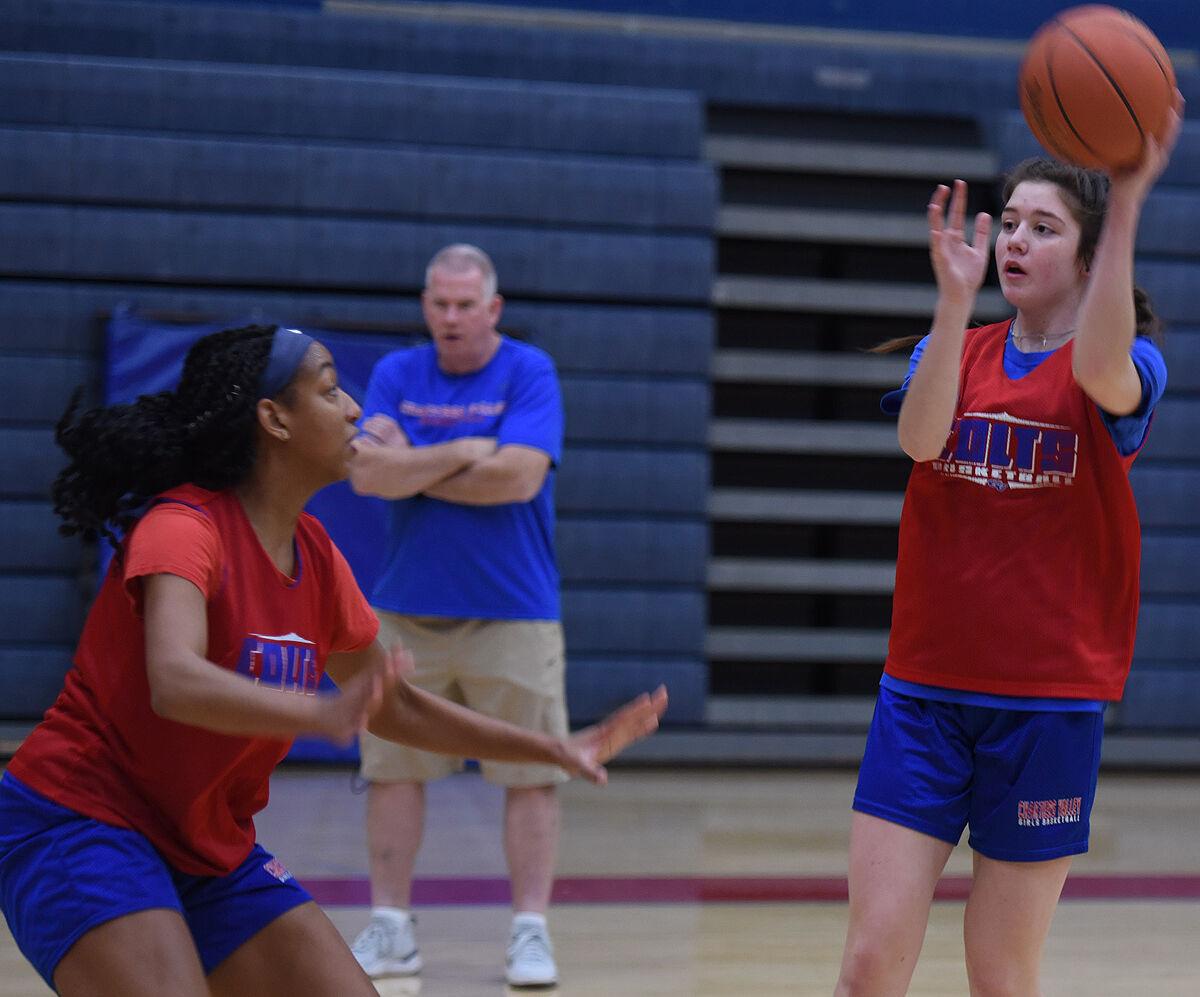 Chartiers Valley senior Aislin Malcolm takes a shot while being defended by Perri Page under the watchful eye of head coach of Tim McConnell.

Marian Turnbull looks to dish off the ball after being double-teamed by a pair of defenders during Chartiers Valley girls basketball practice.

Chartiers Valley senior Aislin Malcolm takes a shot while being defended by Perri Page under the watchful eye of head coach of Tim McConnell.

Tim McConnell enters his 29th season as a Chartiers Valley High School basketball coach with the same philosophy as when he started.

“If there is one lasting lesson I have learned, and I still rely upon today, it’s that no one person is bigger than the program,” he said.

With McConnell back at the helm of the girls program and all five starters returning from last year’s WPIAL championship team, the Colts are sure to thrive.

Under McConnell, CV has won three straight WPIAL and section titles. The Colts also helped him reach a pair of milestones, including his 600th career victory.

McConnell won a state championship on the girls side in 2019 as the Colts rolled up a 30-0 season. Last winter, CV set a state record with 64 consecutive victories and a return to the state finals. The Colts lost to Cardinal O’Hara to end a memorable 25-4 campaign.

The loss also set the stage for this season.

After adding another section and district championship, the goal is to win the state title, McConnell said.

“For us to achieve our goals of winning the section, the WPIAL and the PIAA, we must stay focused and not get complacent,” he said.

With their college choices out of the way, CV’s four seniors are zeroed in on capping their scholastic careers with more championships.

As a freshman, Aislin Malcolm was a starter on the 2019 state championship team. A Pitt recruit, she is a 1,000-point scorer. Malcolm averaged 16.8 points and 2.9 assists per game.

Twins Hallie and Helene Cowan will continue their careers at Seton Hill. Hallie averaged 11.3 points and 2.4 assists per game, while Helene managed 8.5 points and 3.2 assists.

Marian Turnbull returns to the point guard position. A junior, she started during the regular season. Because of the transfer rule, she was ineligible for the playoffs.

Abby Vaites picked up plenty of experience as the team’s first substitute off the bench before stepping into a starting role during the playoffs.

The Colts will also rely heavily on reserves like Chloe Williams, Ella Cupka and Lilah Turnbull.

A freshman, Turnbull is no stranger to success. She helped lead the girls cross country team to a runner-up showing in the WPIAL championship and the school’s first-ever PIAA appearance as a team.

Last season, the Colts ranked among the WPIAL’s top offensive and defensive teams. CV averaged 62.9 points per game and limited the opposition to 38.7 points an outing.

“In addition to our experience, we will rely upon our shooting and defense,” said McConnell. “We have to improve our rebounding though.”

Moon, South Fayette and Oakland Catholic could pose the biggest threats to CV in Section 5.

The Colts opens the 2021-22 campaign against Winchester Thurston Dec. 13 in the Play 4 Mae Tournament at Woodland Hills. The Colts then play the Woodland Hills Dec. 17.

Megan McConnell and Gabi Legister are competing at the collegiate level for Duquesne and Kennesaw State respectively.

A 5-7 guard, McConnell led the Dukes in assists and steals and ranked 17th and 12th in those respective categories in the Atlantic 10 Conference last winter as a freshman.

As sophomore this season, she is averaging 10.3 points and 5.4 rebounds per game. She has a team-high 31 assists and 20 steals.