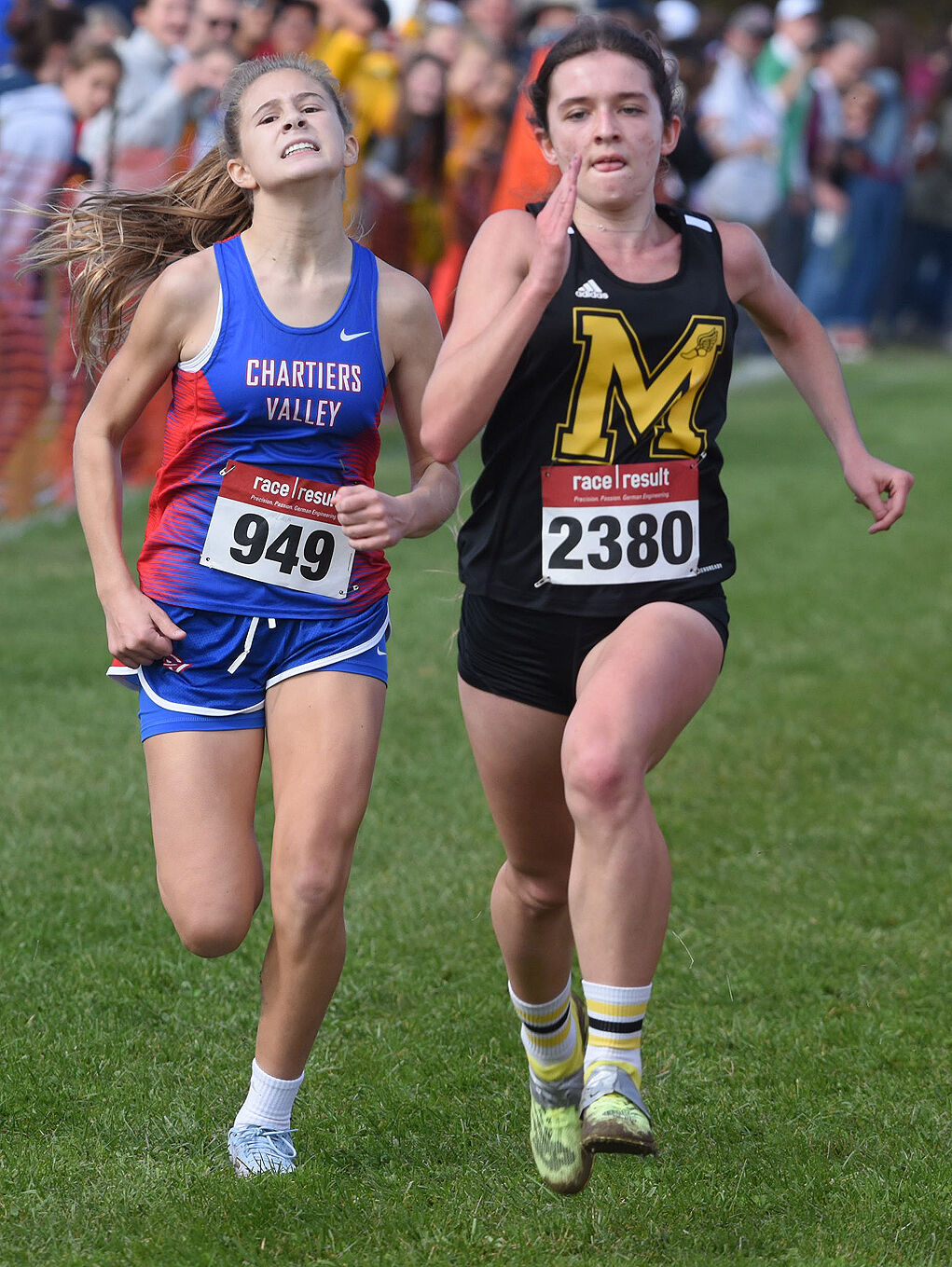 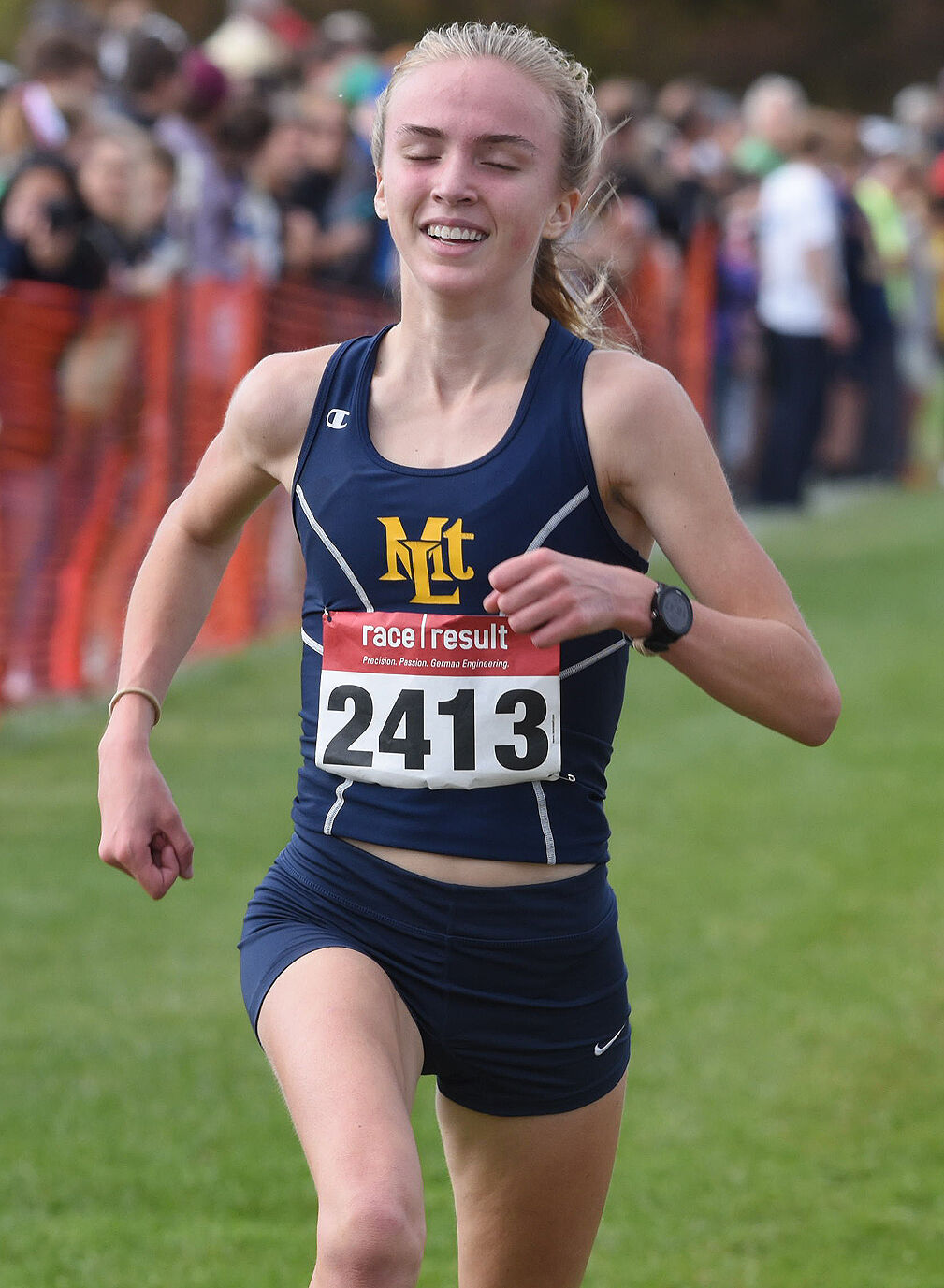 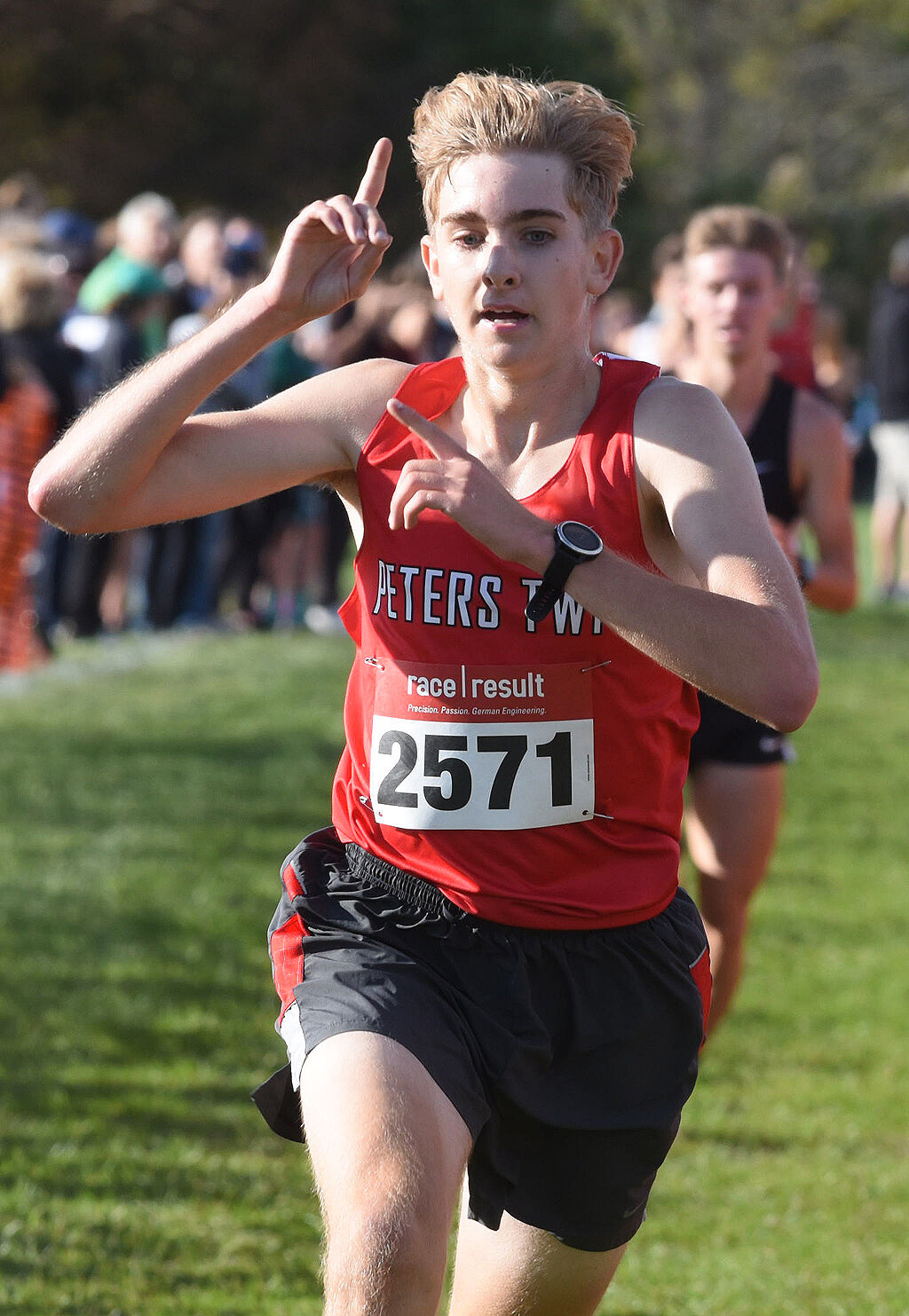 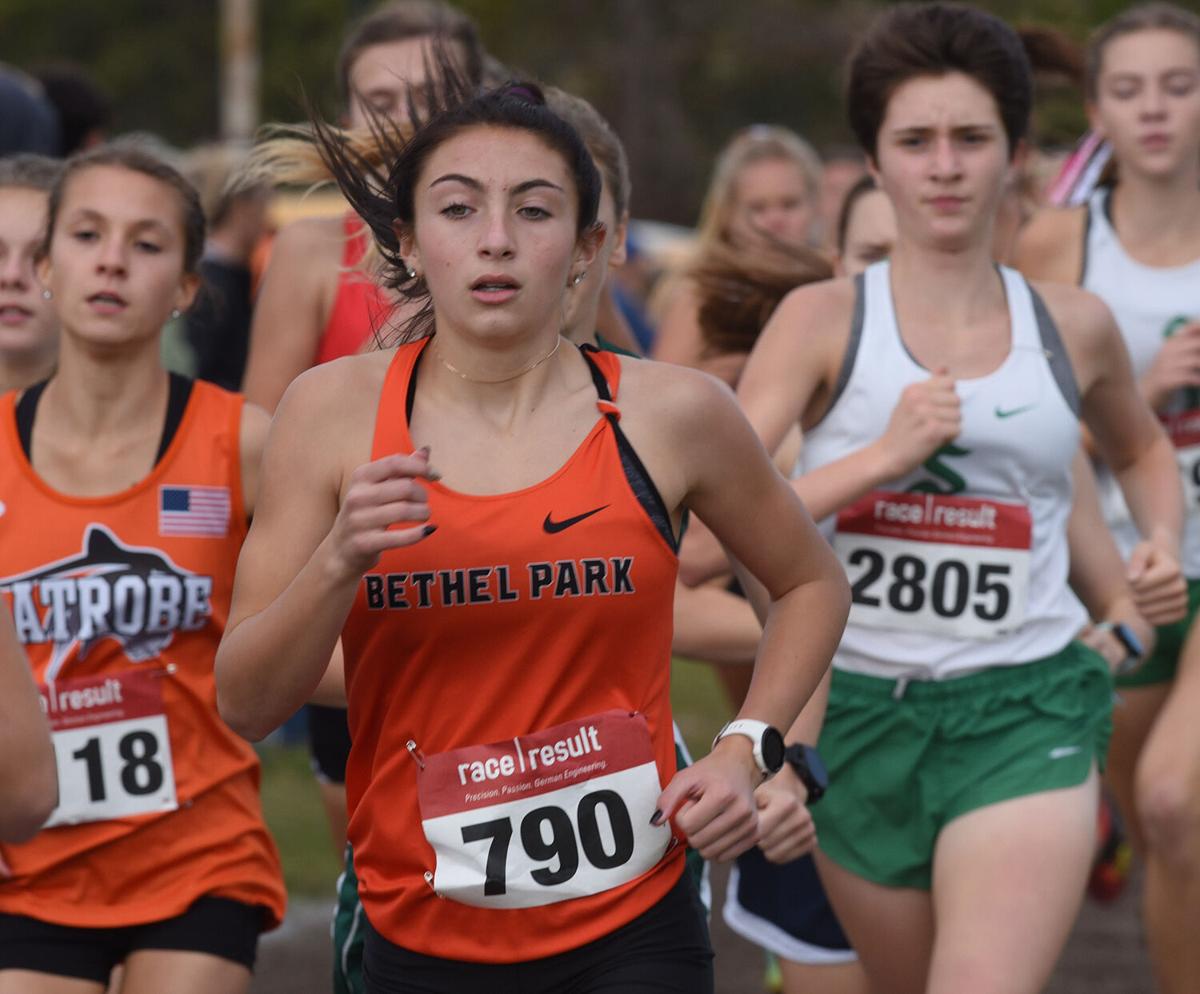 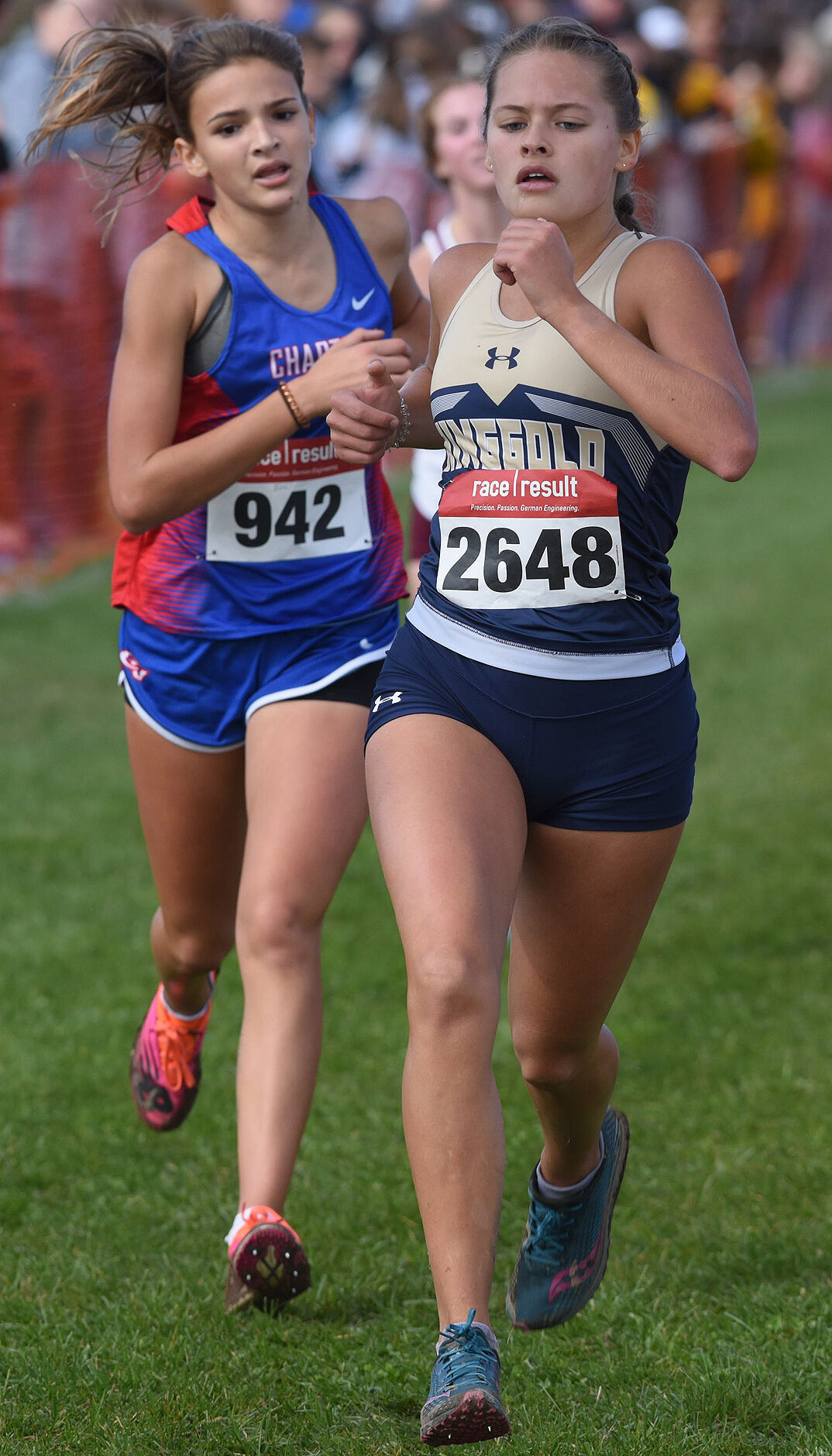 Charlee Leach of Ringgold edges ahead of Eva Kulbago from Chartiers Valley near the finish line of the WPIAL Class AA girls cross country championship race.

Charlee Leach of Ringgold edges ahead of Eva Kulbago from Chartiers Valley near the finish line of the WPIAL Class AA girls cross country championship race.

Silver sparkled as bright as gold for the Chartiers Valley girls and Mt. Lebanon’s Logan St. John Kletter during the WPIAL cross country championships held Oct. 28 at Roadman Park on the California University of Pennsylvania campus.

The Colts and St. John Kletter knew they could not place first heading into the competition so their second-place showings were triumphs in themselves.

CV took second in the Class AA team standings and earned its first berth in the PIAA championships set for Nov. 6 in Hershey.

“We are making history for the school this year,” said CV head coach Lori Poe. “No boys and no girls have made it to states as a team before. This is the first time.”

The Colts totaled 104 points and finished runner-up to Montour. The Spartans placed four runners in the top 7 to dominate the competition. Montour’s Harley Ketz won the race in 19:39.7

“Montour is tough,” Poe said. “They are solid. Awesome.”

“Lilah is an incredible athlete,” Poe said. “She came out and set everything on fire for us. She gets everyone excited and pushes them.

“Eva has had an incredible season and has led the team all year. She has been one of the top runners in the area when we competed. She is always up there with everybody.”

During the dual-meet section competition this fall, CV raced against Class AAA competition. That prepared the Colts for the WPIAL championships, Poe said.

“The AA teams are all really good but we have been beat up and tested all season long by going up against the toughest teams in Class AAA,” she said. “That helps a lot.”

Running close together enabled the Colts to take home a trophy.

Sophomore Danie Thornton finished in 22nd place in 22:05.6, while freshman Juliana Betts followed in 29th at 22:27.0 and sophomore Rachel White completed the course in 22:58.6 for 35th place. Seniors Grace Magilson and Abby Betts contributed solid times that put them among the top 70 runners.

“We were solid the whole race,” Poe said. “We wanted everyone to be tight as a pack. We knew our 1-2 would be in the top 15 so we need a 3-4-5 and 6-7 to just be tighter. They looked strong the first mile and we saw at top of the hill that we were still in it. We had to finish strong and we did. Everybody ran an incredible race.”

St. John Kletter ran a personal record on the course but her time of 18:48.3 was almost 30 seconds off the winning pace of 18:18.6 set by Moon’s Mia Cochran in the Class AAA race. A three-time WPIAL winner, Cochran is the two-time defending state champion and an Arkansas recruit.

“She’s ahead of a lot of other girls,” said Bethel Park’s Jenna Lang, who finished runner-up to Cochran last season. “You don’t worry too much about her. You just worry about the girls around you.”

St. John Kletter agreed. Her top concerns were Lang as well as North Alletheny freshman Wren Kucler, who finished third overall to help the Tigers to their fourth straight team title with a 49 score.

“It’s really tough knowing that you are not going to win but I am happy with how I did,” St. John Kletter said. “It’s comforting to run against Mia and it’s nice to know that I have this competition but it was a real battle for the second spot.”

St. John Kletter knew it would come down to her and Kucler for the silver. She won the uphill battles but Kucler created gaps on the downhills.

“I noticed we were so tired after the hills and that we started slowing down a bit. I decided then to make my move. The rest of the race was crazy because I didn’t know where she was behind me,” St. John Kletter said. “I was pushing as hard as I could just trying to get that second place.”

Thanks to St. John Kletter, Mt. Lebanon took third place as a team with a score of 193, behind runner-up Pine-Richland who scored 135, and qualified its entire unit for the PIAA championships.

Lang led the list of four individuals to qualify for the PIAA Class AAA girls finals. She finished seventh overall with a 19:35.1 time.

South Fayette’s Lauren Iagnemma finished in 14th place with a time of 20:07.7, while her teammate Lily Colombo finished in 20th at 20:20.0 and Peters Township’s Sydney Shock managed a 20:28.1 for 21st place to qualify for the state finals meet.

Butler followed in second as CJ Singleton and Drew Griffith led a 1-2 showing at the finish line.

A Notre Dame recruit, Singleton won the race in 16:26.3. A freshman, Griffith followed in second, six seconds off the pace.

Other top South Hills finishers to qualify for the PIAA championships in Class AAA included:

Bishop Canevin advanced three runners in Class A competition. Erin LaQuatra grabbed fifth place overall in the girls race with a 21.38.9 time while Kailen Spears finished in 16th place and Trey Varley took 27th in the boys run with times of 18:35.4 and 19:01.5, respectively.