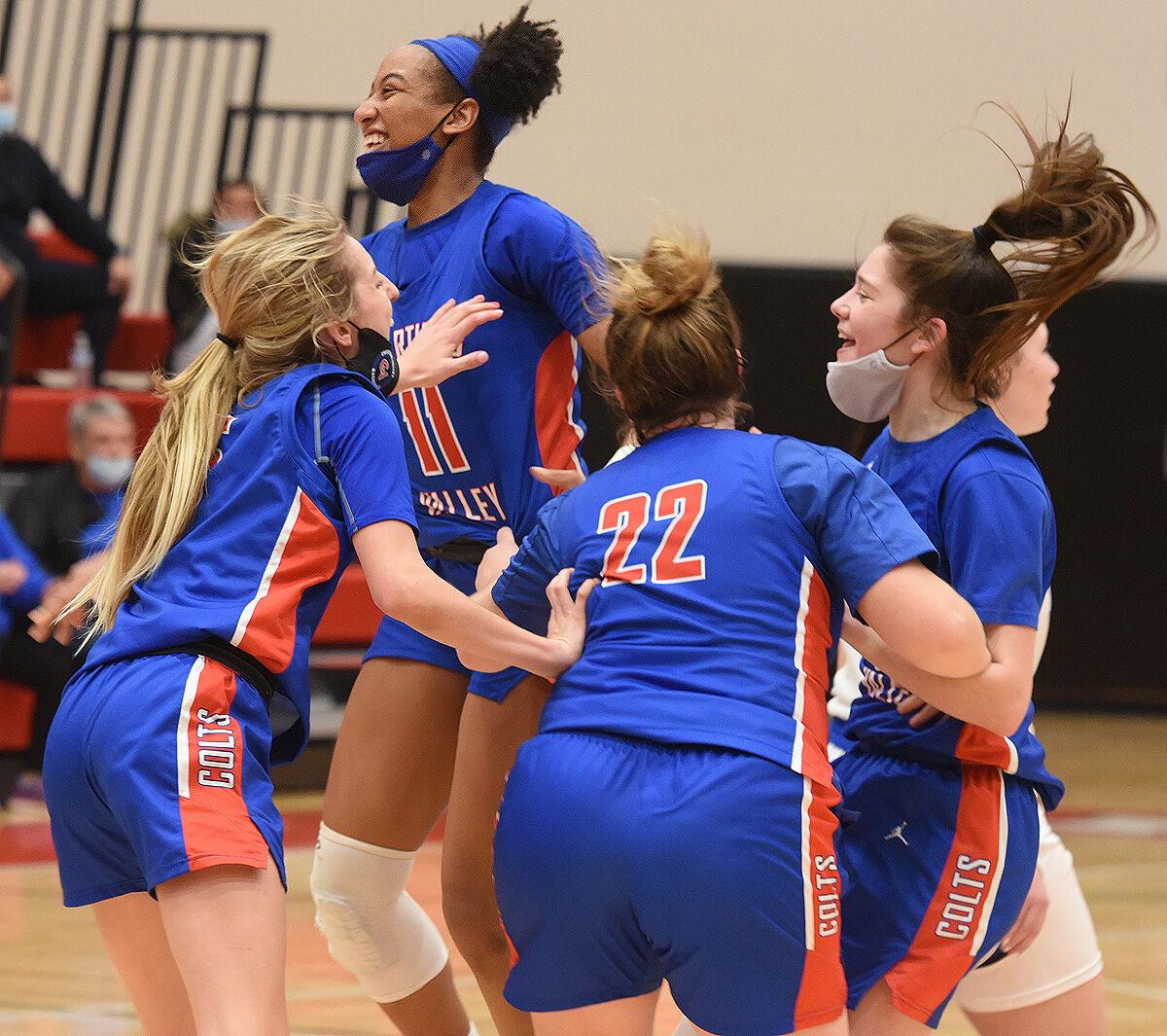 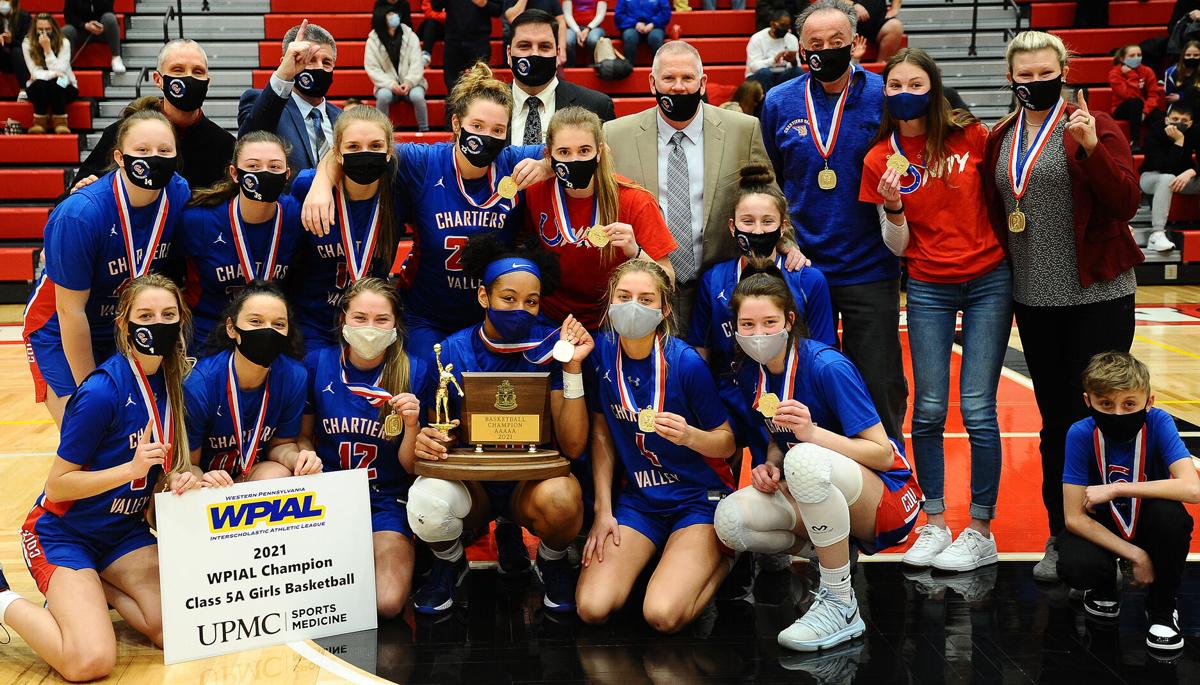 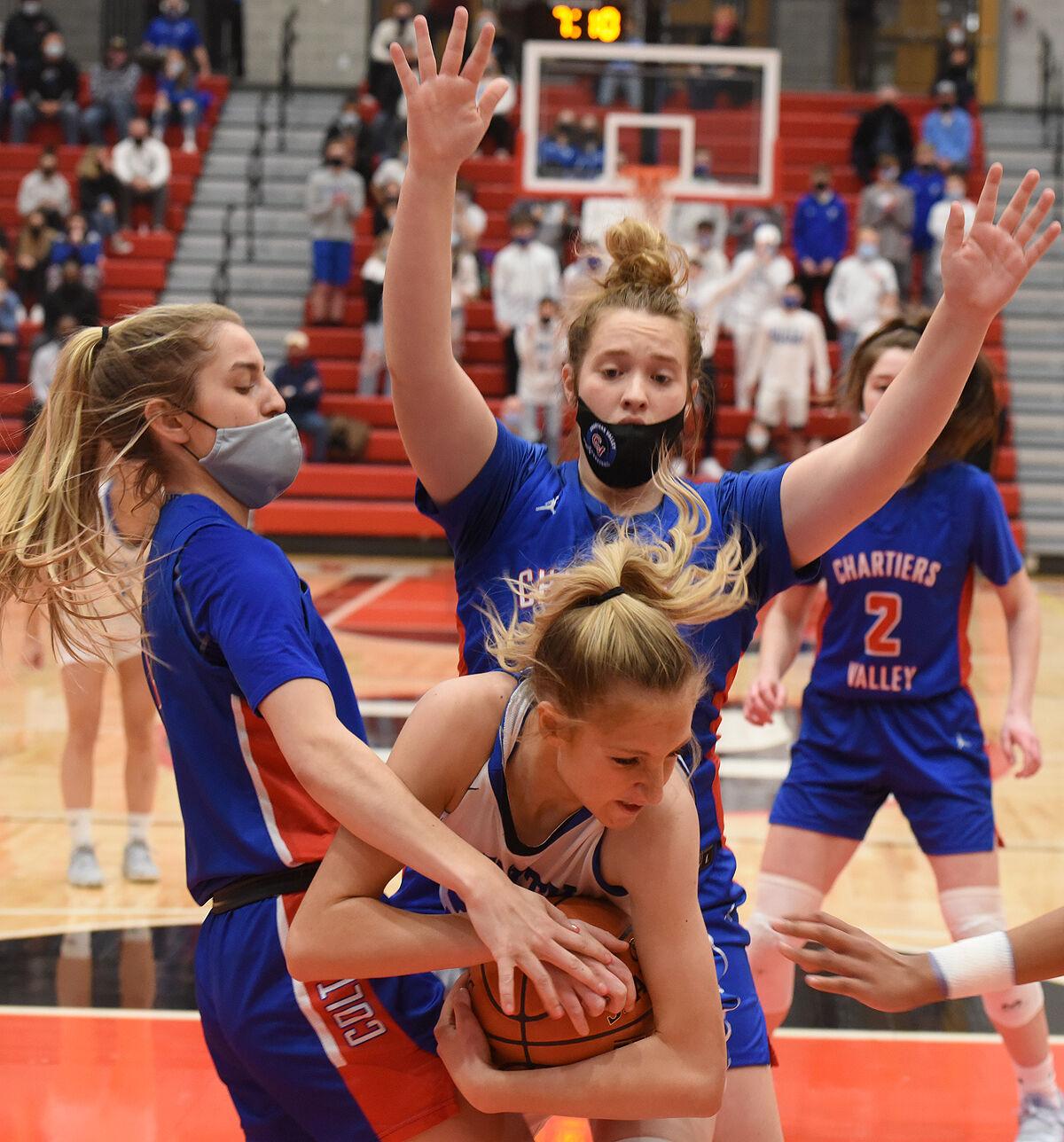 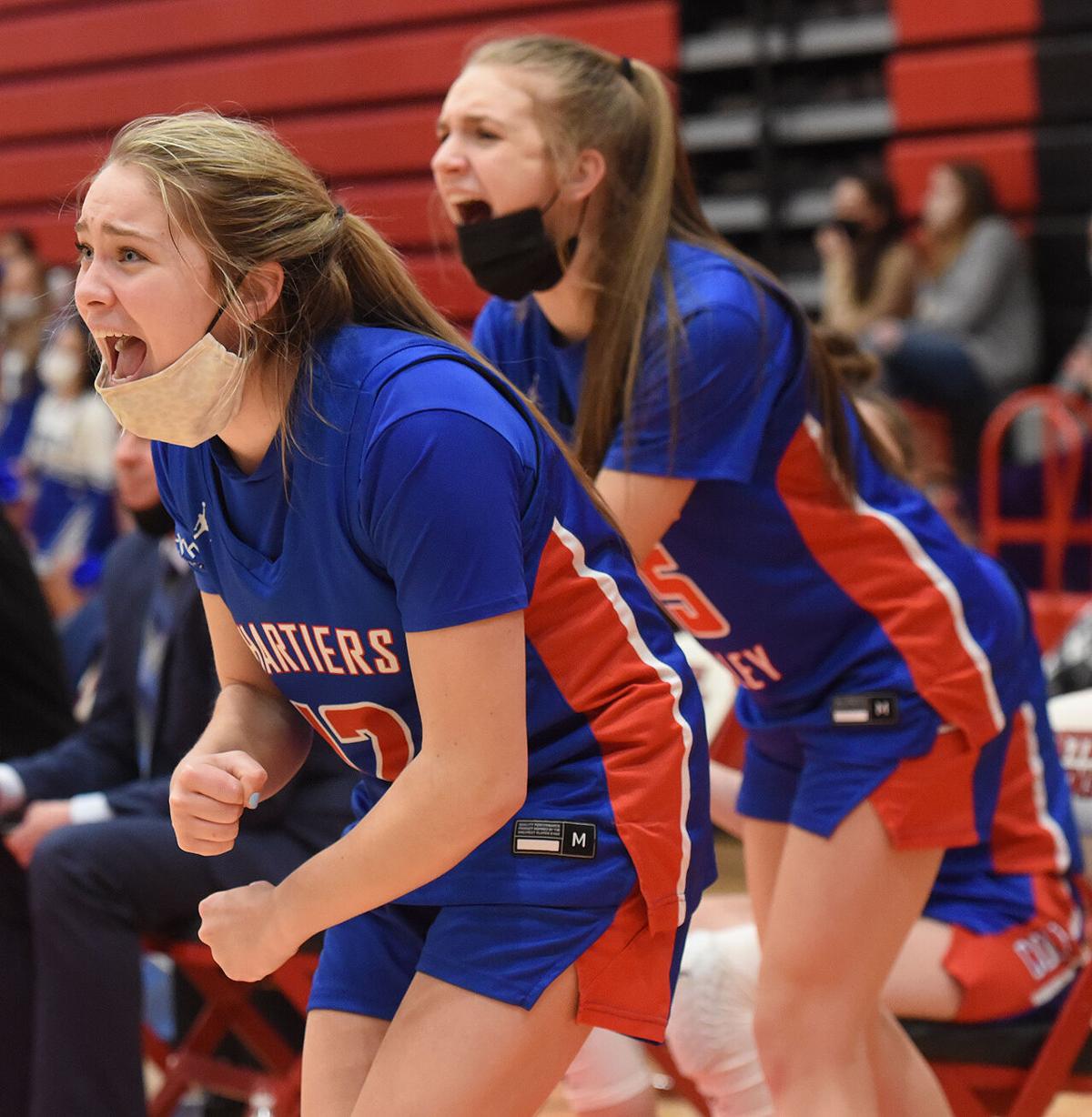 Chartiers Valley’s Caleigh Bogats, left, and Olivia Alauzen cheer on their teammates during the WPIAL Class 5A championship game. 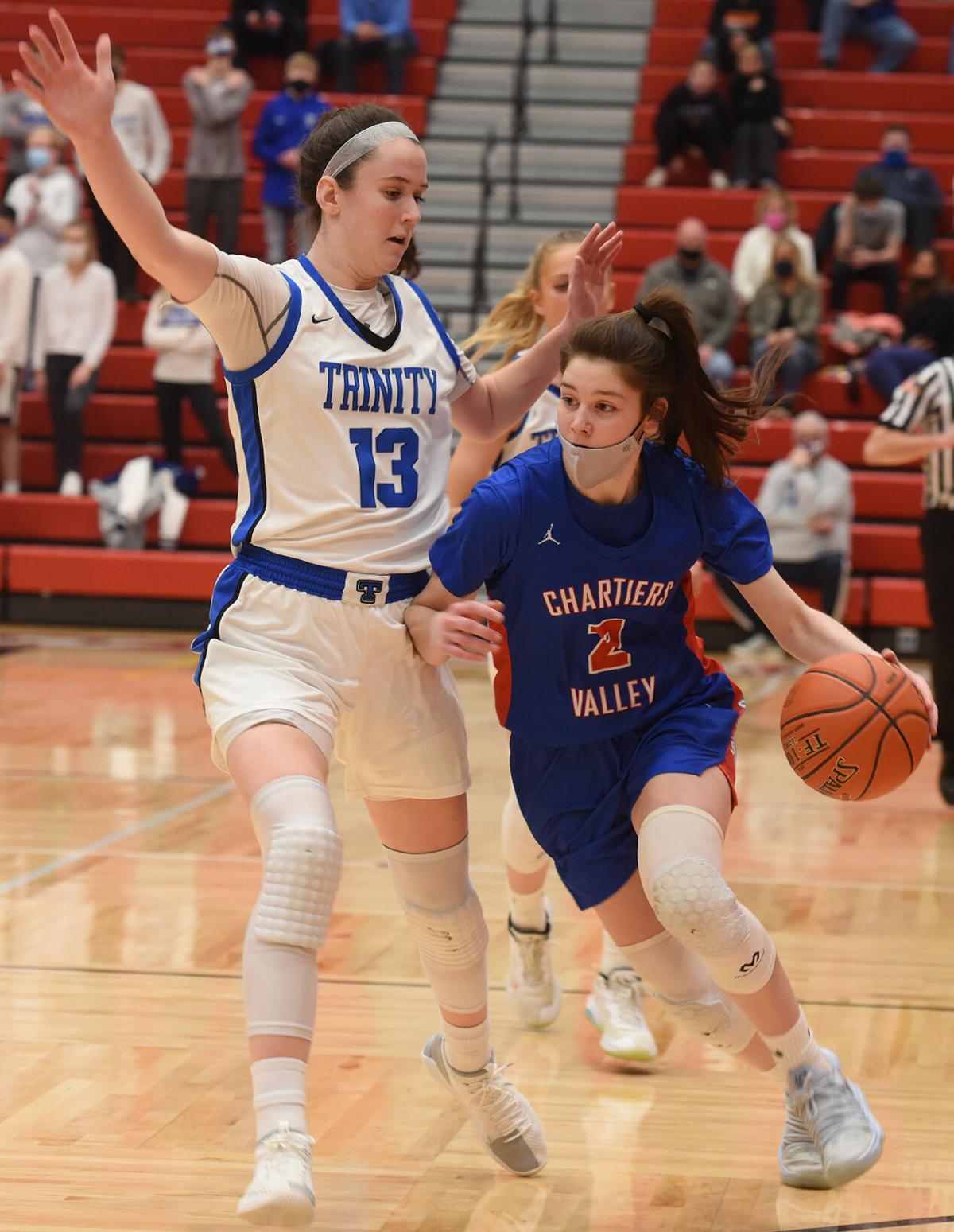 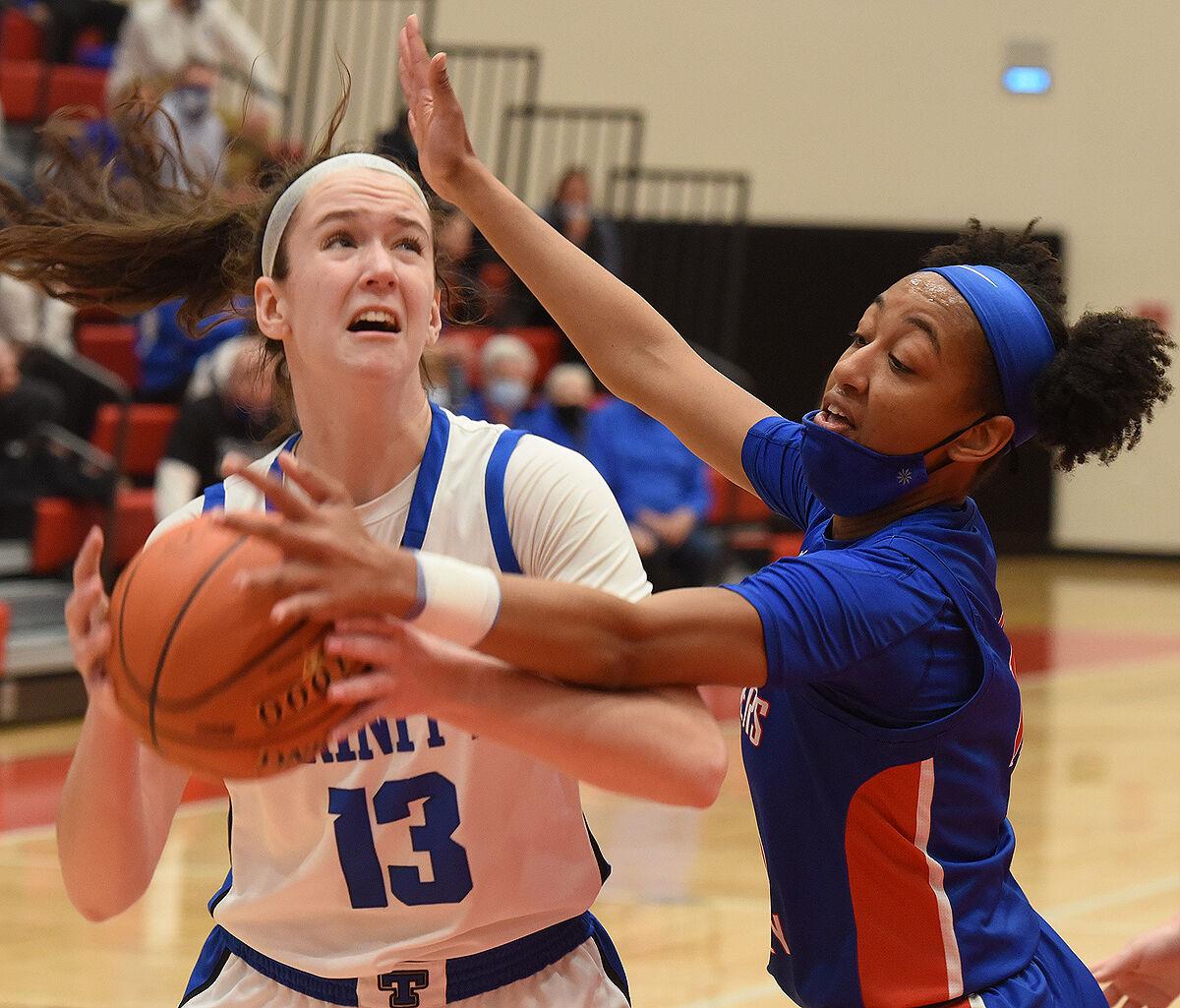 Chartiers Valley’s Caleigh Bogats, left, and Olivia Alauzen cheer on their teammates during the WPIAL Class 5A championship game.

For the third year in a row, the Chartiers Valley girls basketball team captured a WPIAL championship.

“We never talked about revenge,” said CV head coach Tim McConnell. “It was all about winning a WPIAL championship.

“Honestly, I didn’t care about (the winning) streak. The streak I care about is three in a row. We were here to win WPIAL championships.”

The Colts took to their task immediately, using an 18-2 run to streak to a 22-7 lead that morphed into a 36-25 advantage at intermission. CV outscored the Hillers 15-7 in the third quarter and 11-7 in the fourth.

“We wanted to come out swinging,” he said.

From the onset, the Colts fired on all cylinders.

Aislin Malcolm led the charge. The Pitt recruit scored 19 points. She was 2-for-4 from beyond the arc.

Perri Page tossed in 18 points and pulled down 14 rebounds. She is a Columbia University prospect.

Twins Hallie and Helene Cowan chipped in 13 and 12 points, respectively. Hallie was 3-for-4 from 3-point range.

Despite not dwelling on having their state-record winning streak snapped, McConnell said the Colts being seeded No. 2 in the tournament motivated his players.

“We relish the underdog role,” he said. “When we lost to them earlier in the season, we learned a lot about ourselves as a team.

“We didn’t play good defense that day. They outworked us, they out-hustled us,” McConnell added. “This was one of the most complete games we’ve played.”

“(Dahlquist) was a focus,” McConnell said. “That first game she made wide open three-pointers. She’s been making four or five threes a game since then. Perri did a phenomenal job of guarding her.”

Kaylin Venick pumped in 15 points for the Hillers, who converted just 15 of 56 of their field goal attempts and 4 of 23 from 3-point range.

McConnell now owns nine WPIAL titles – six with the CV boys and three with the girls. No matter where the games are played, winning WPIAL championships is special, McConnell said.

“I know it wasn’t at the Pete, or the Palumbo Center or Robert Morris, but it never gets old. It’s a WPIAL championship,” he said.

“I never got into coaching to break streaks. I never even thought about breaking a streak. (The winning streak) was nice, but you can’t take away a WPIAL championship.”

The Colts (23-3) were scheduled to begin their pursuit of a PIAA title March 20 against District 10 champion Warren (22-3) in the first round of the state tournament.

CV won the PIAA title in 2019, but could not defend their title in 2020 after the state tournament was canceled after the quarterfinals in response to coronavirus pandemic.

The Chartiers Valley boys (22-4) could not duplicate their female counterparts success as they lost their championship bid.

The Colts, who were seeking their seventh title in program history, suffered a 61-45 defeat to New Castle in the Class 5A title tilt played March 13 at North Allegheny.

The Hurricanes (21-2) have now won 14 WPIAL titles, seven of them under current skipper Ralph Blundo.

The game was the third meeting between the school’s. During Section 2 play, the teams split decisions. After losing at home to the Canes, 73-45, the Colts traveled to New Castle and won, 77-59.

On a neutral court, New Castle prevailed because of defense. The Canes held the Colts to its lowest point total of the season. CV also connected on just 29 percent (16 of 55) of its shots from the field and 20 percent (6 of 30) of its attempts from beyond the arc.

Sheldon Cox led the Canes. He scored 24 points, including four off a pair of dunks in the final minute of play. He also grabbed 10 rebounds.

Also in double figures for New Castle were Michael Wells with 13 tallies and Isaiah Boice with 11 markers.

Garrett Alauzen and Anthony Mackey finished with nine and eight points for the Colts.

In addition to Reynolds, Anthony Collura, Socrates Boulis and Brandon Ferguson will be lost to graduation.