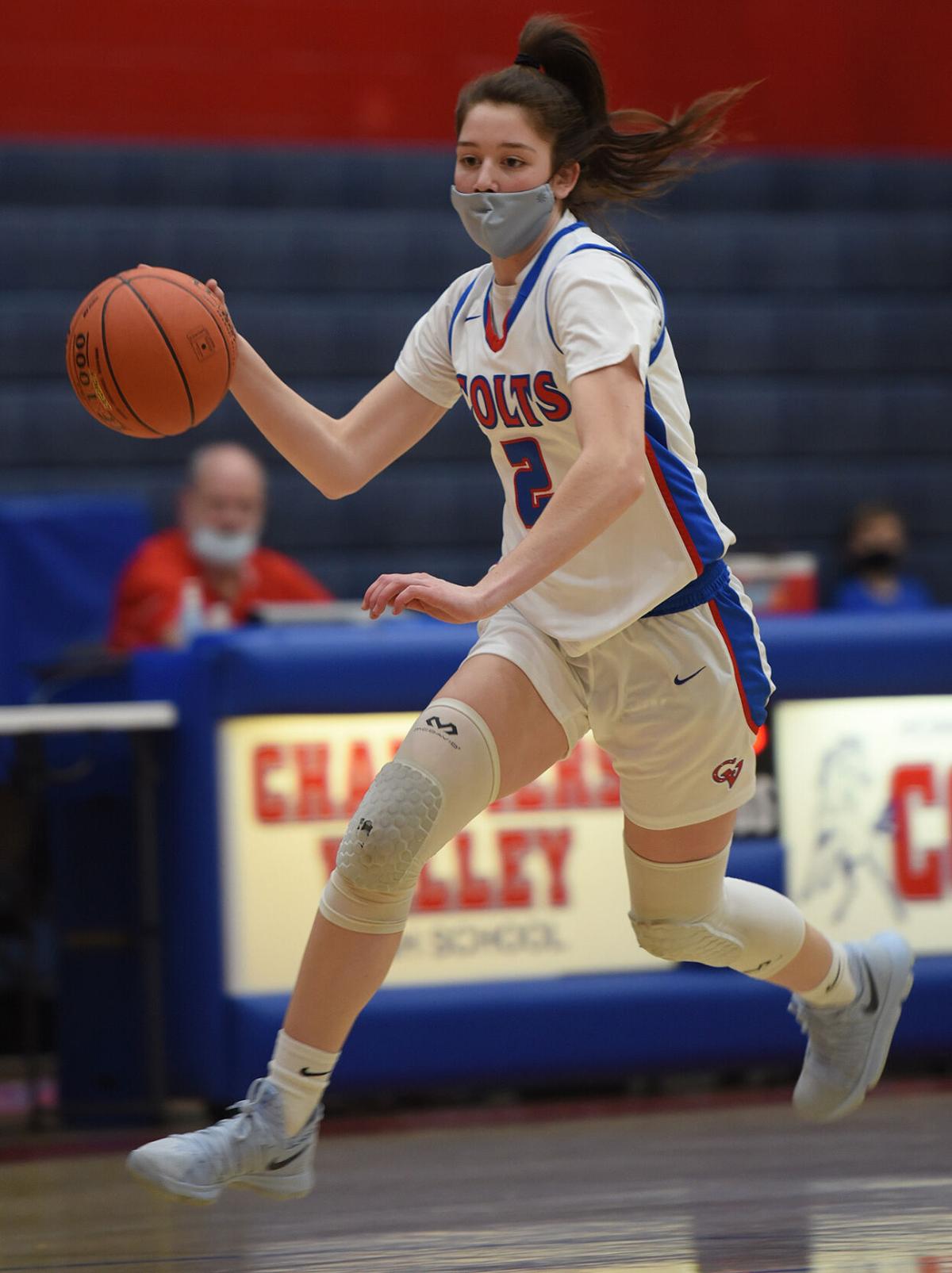 Aislin Malcolm was named Class 5A Player of the Year by the Pennsylvania Sports Writers. She also earned first-team honors on the All-State squad. 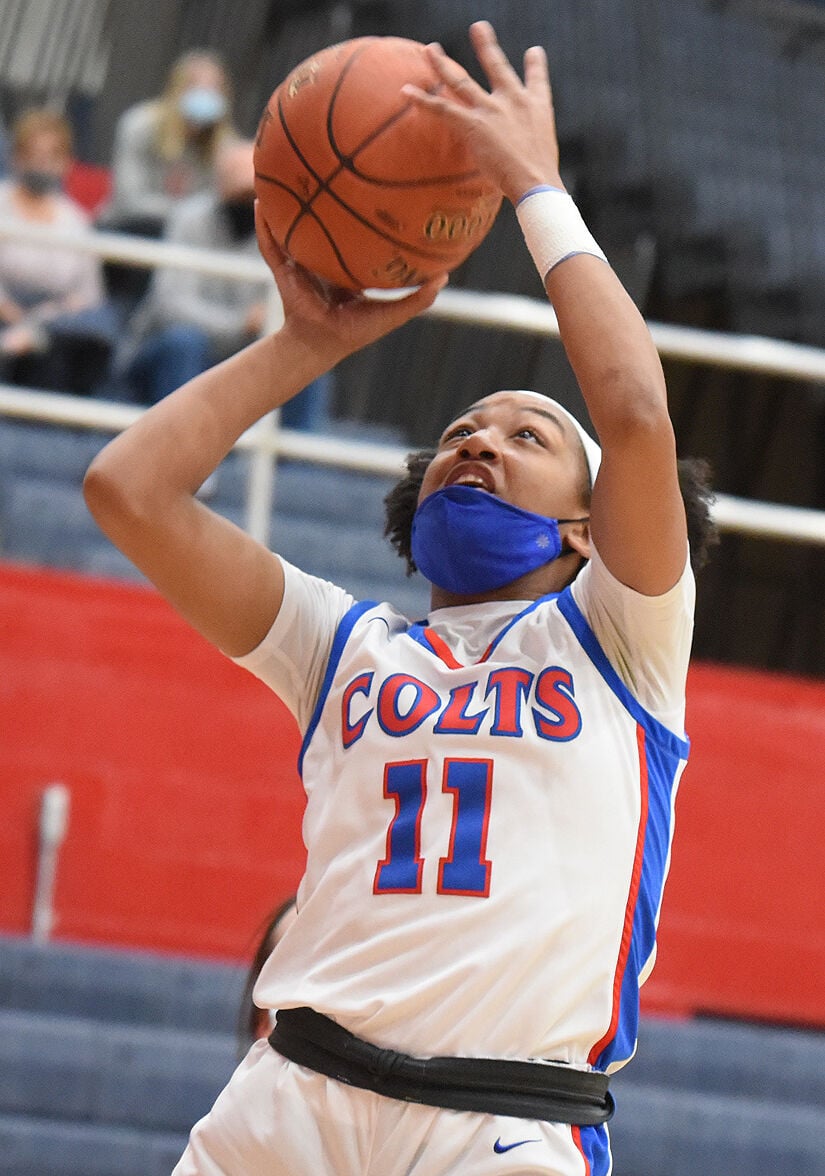 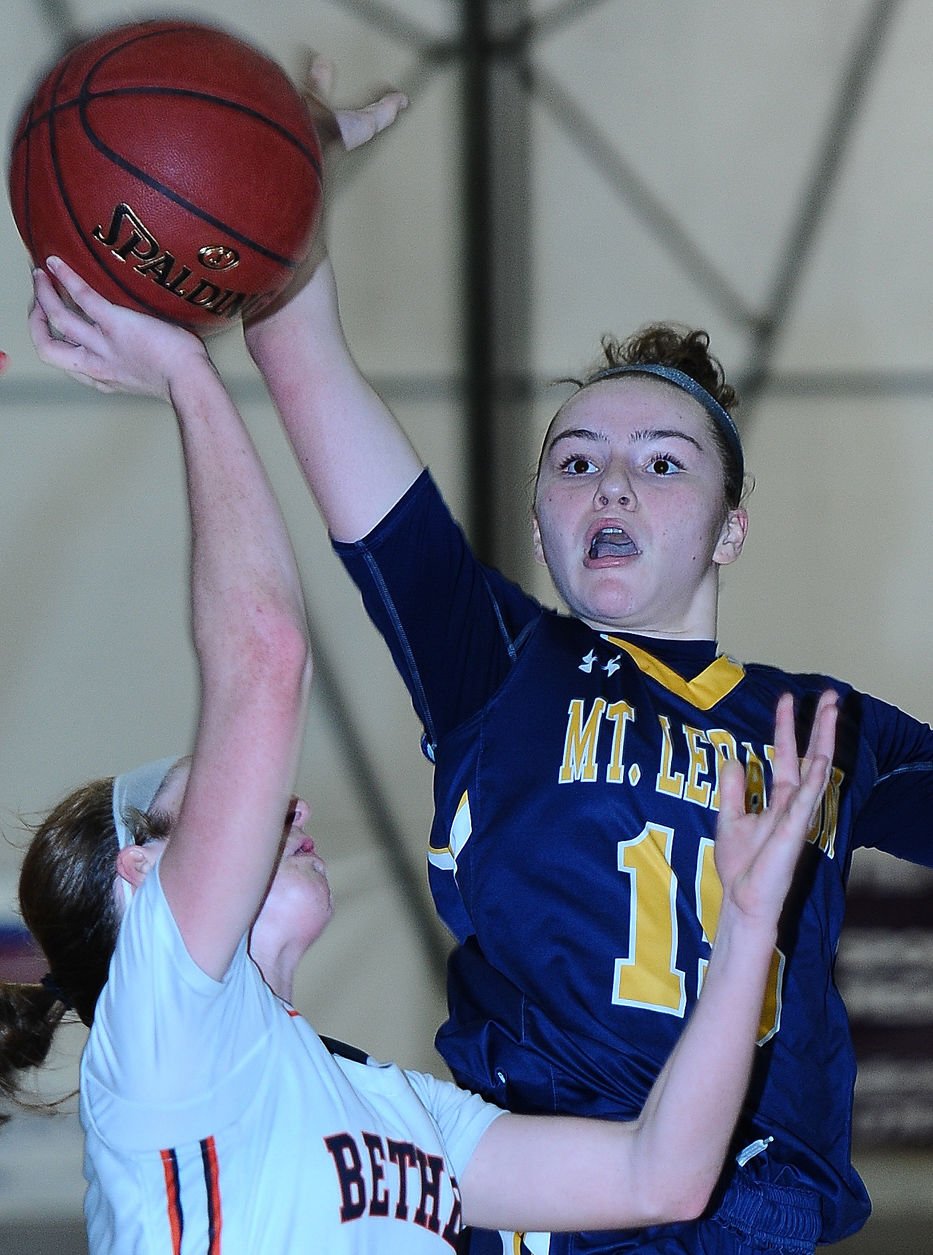 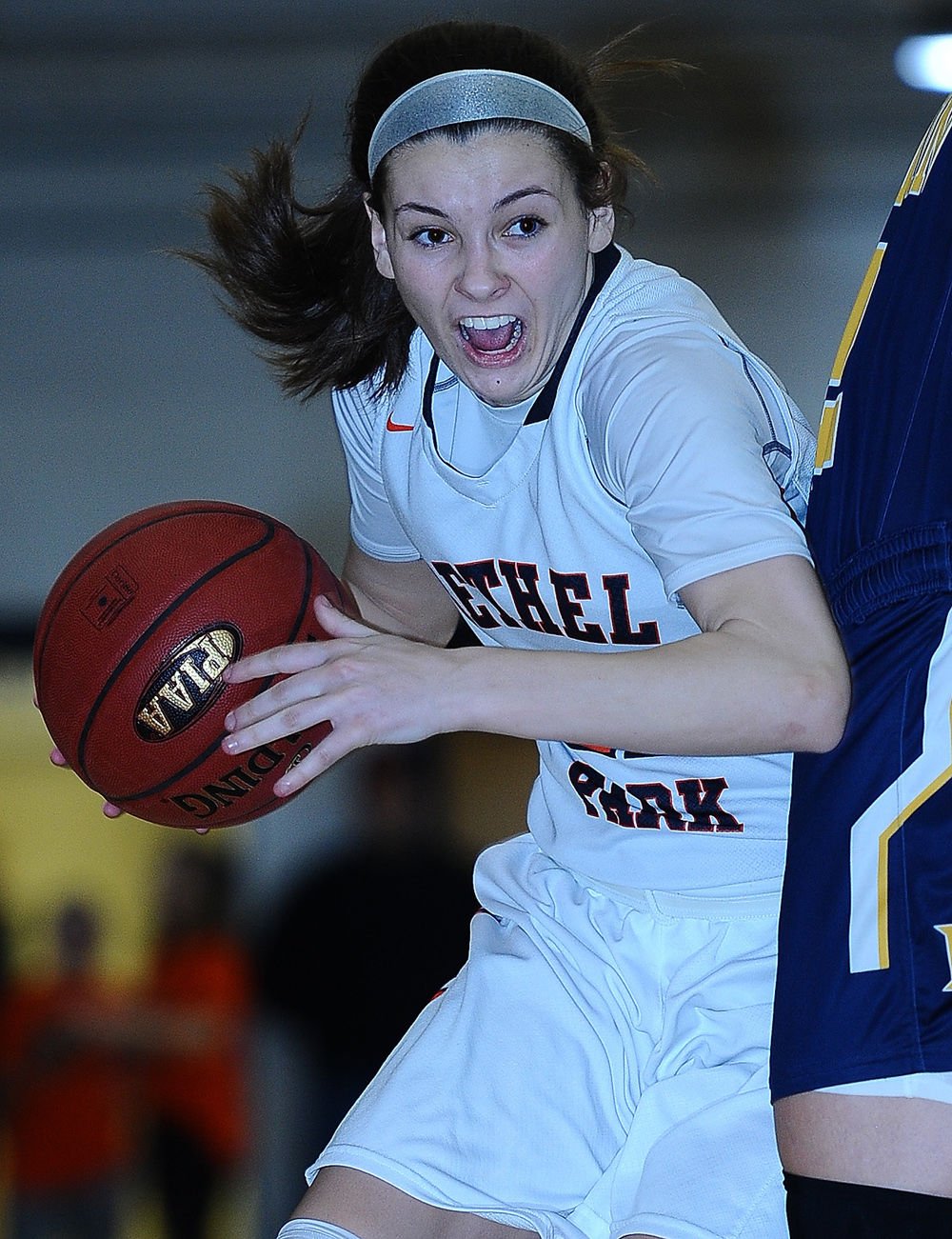 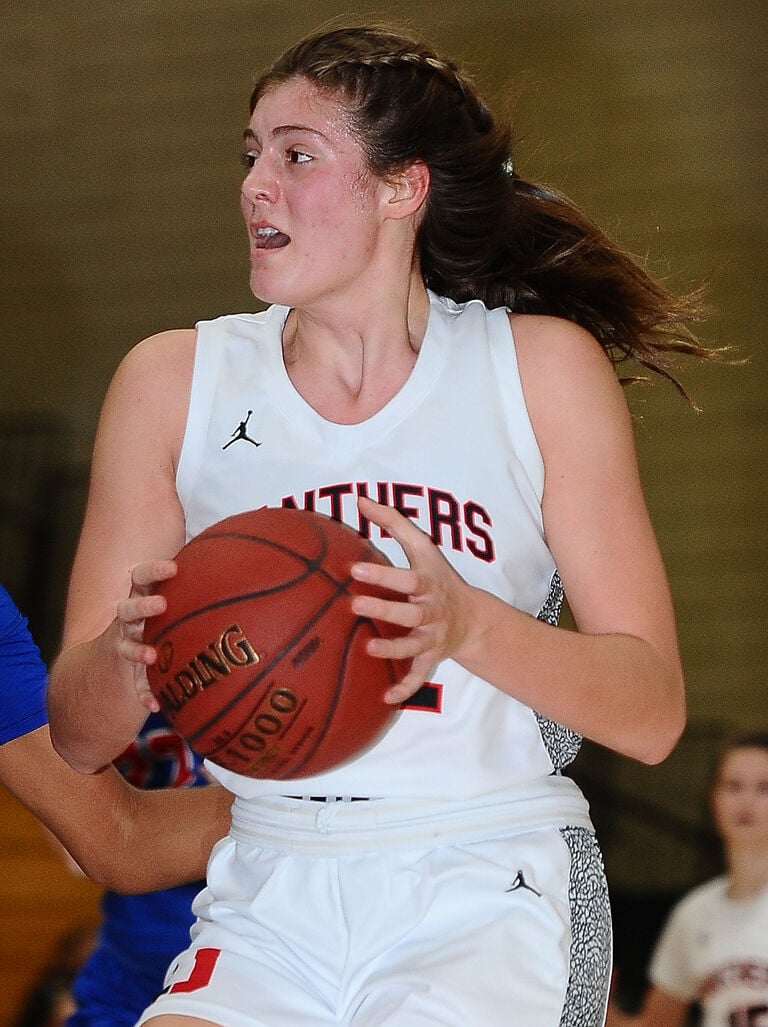 Only a sophomore, Kate Robbins led Upper St. Clair with 14 points and 8.5 rebounds per game this season. 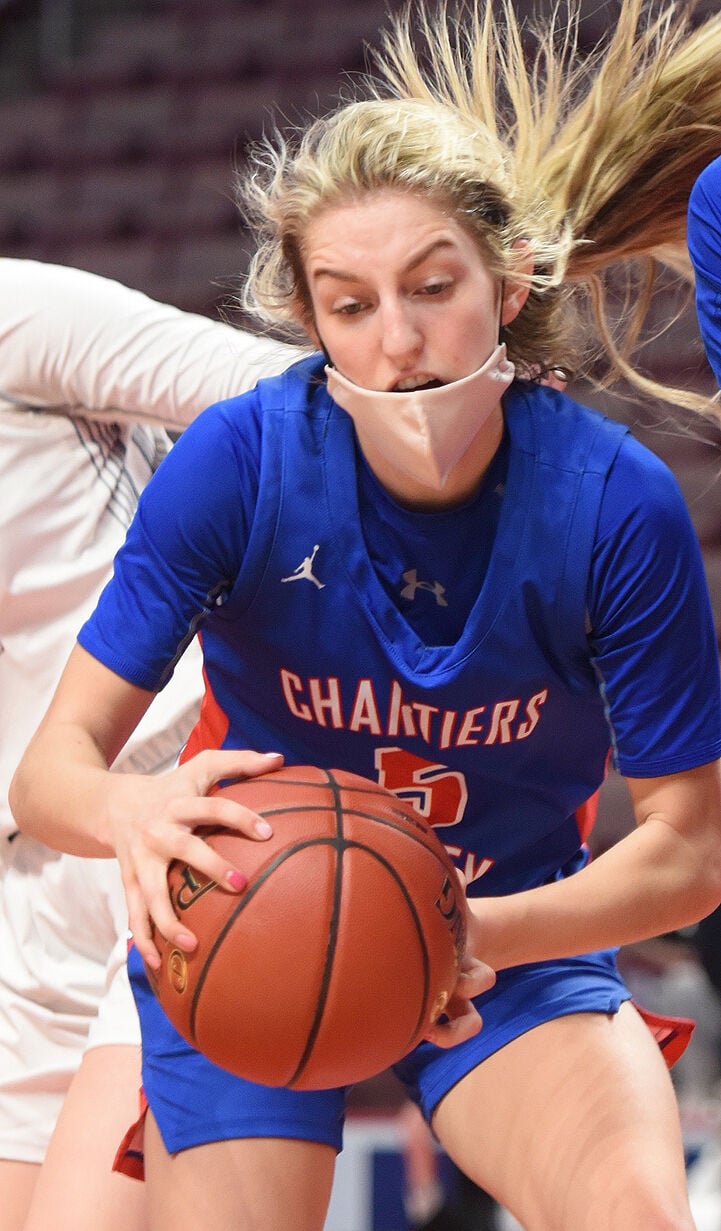 Chartiers Valley’s Helene Cowan led the Colts in assists with 3.2 and steals with 2.8 per game. 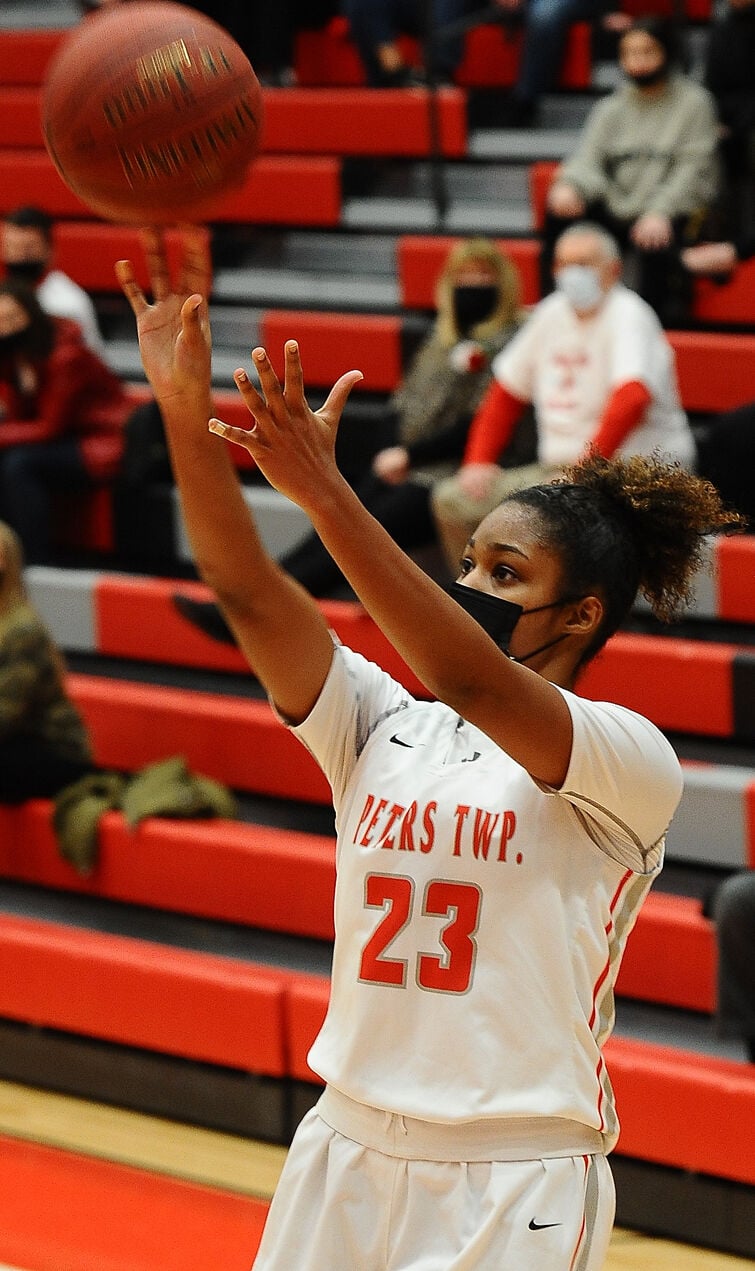 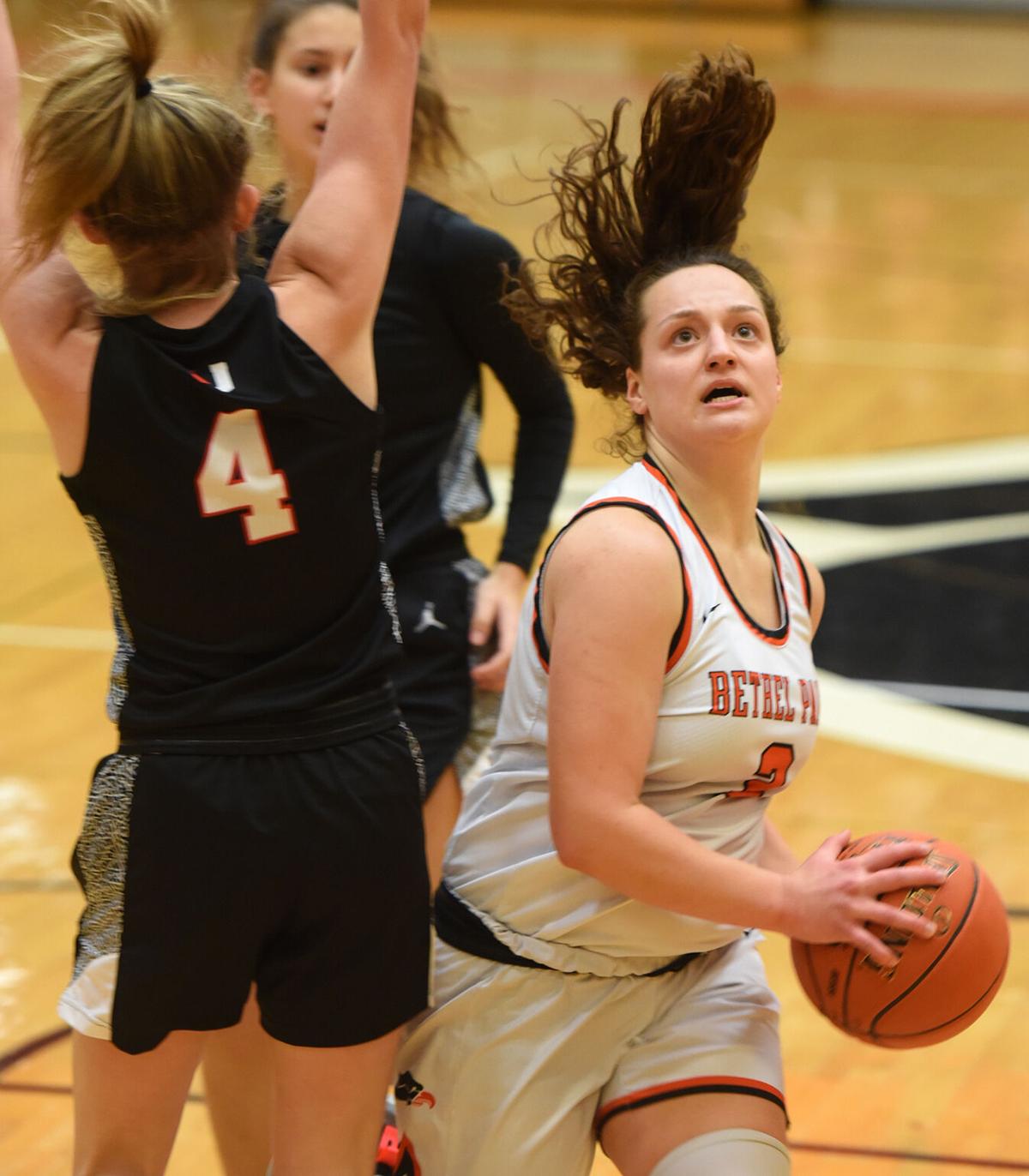 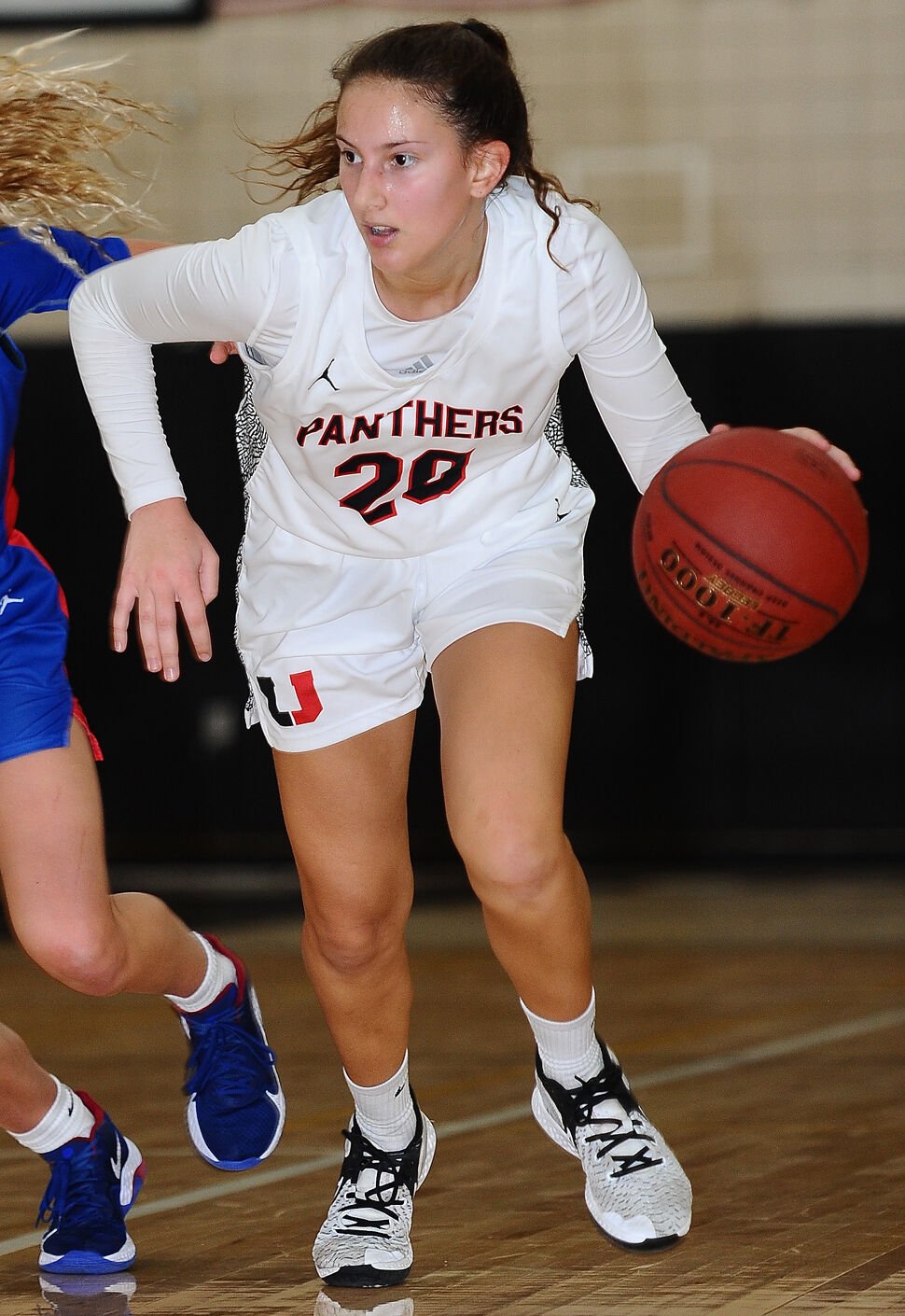 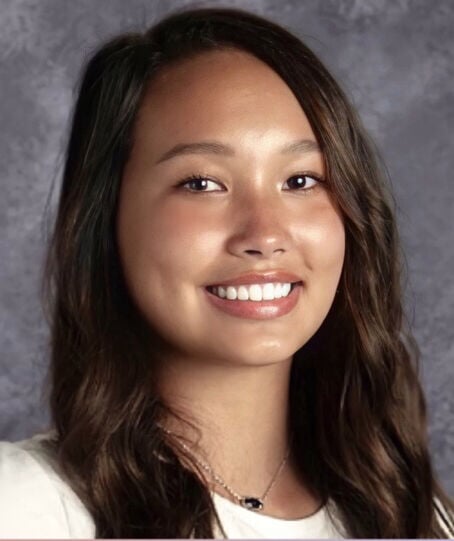 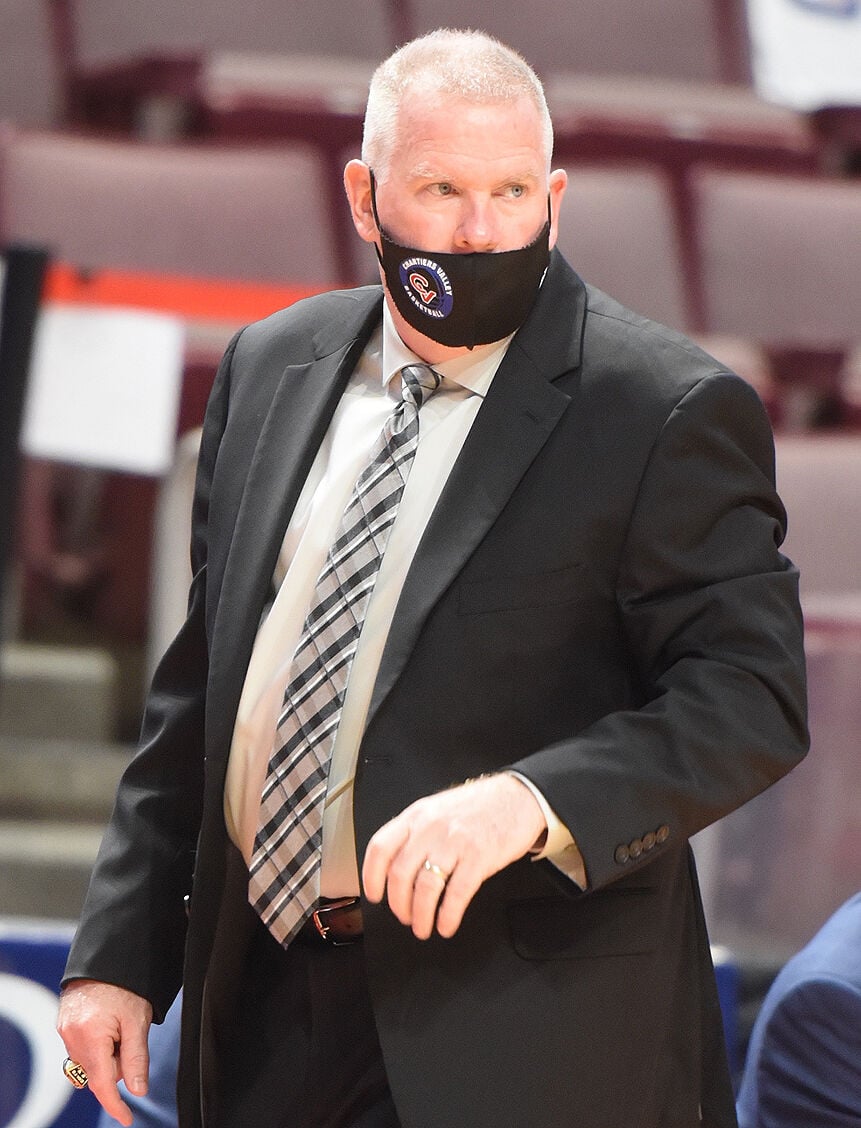 Tim McConnell watches the action from the sidelines as he directs his Chartiers Valley girls basketball team. 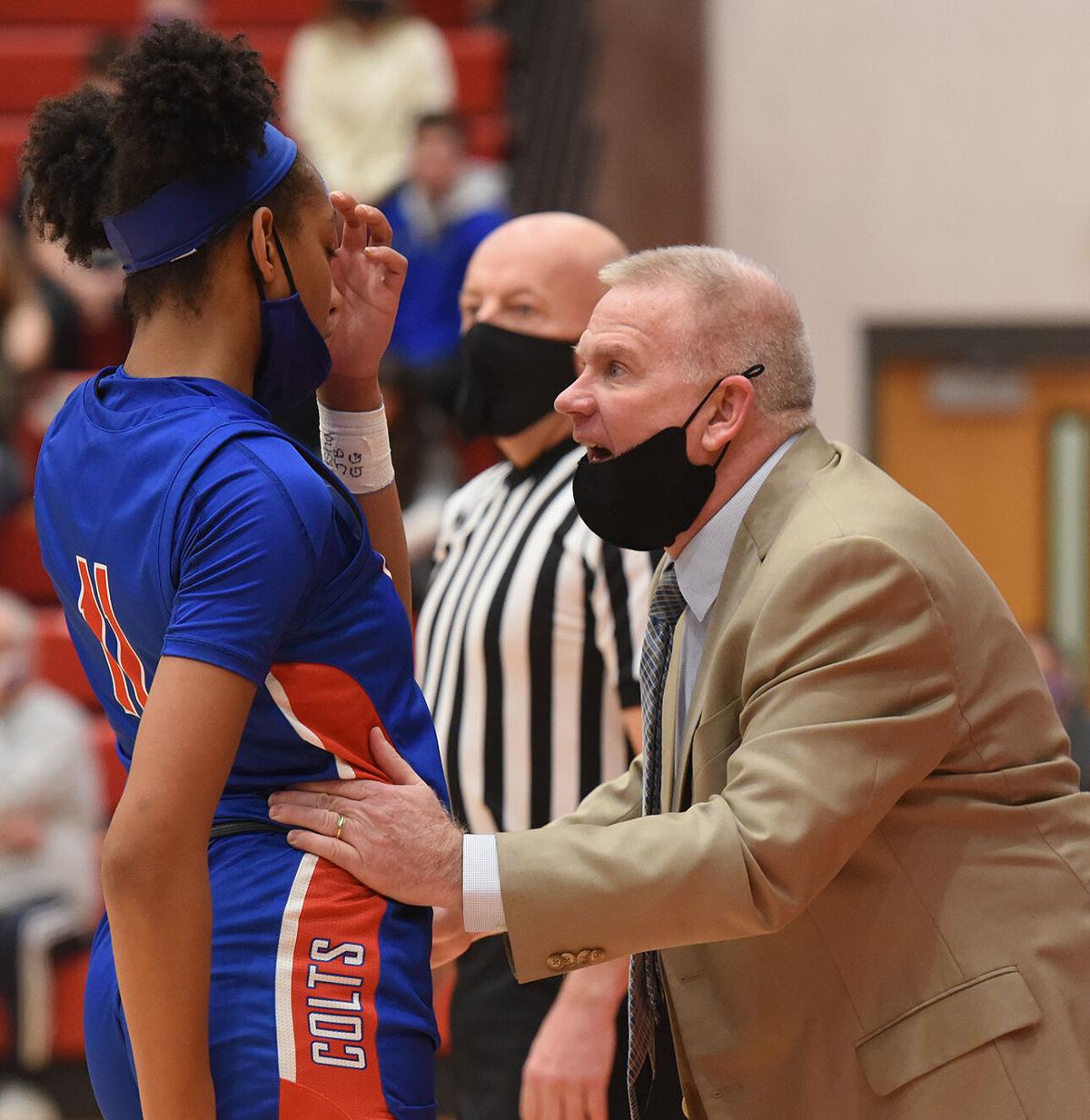 Aislin Malcolm was named Class 5A Player of the Year by the Pennsylvania Sports Writers. She also earned first-team honors on the All-State squad.

Only a sophomore, Kate Robbins led Upper St. Clair with 14 points and 8.5 rebounds per game this season.

Chartiers Valley’s Helene Cowan led the Colts in assists with 3.2 and steals with 2.8 per game.

Tim McConnell watches the action from the sidelines as he directs his Chartiers Valley girls basketball team.

Chartiers Valley dominated the girls basketball scene in 2021. The Colts captured a third straight WPIAL Class 5A championship title, set a state record for consecutive victories and finished runner-up in the PIAA tournament.

So it may come as no surprise that CV garnered the lions’ share of postseason accolades.

Colts junior Aislin Malcolm was named The Almanac MVP and head coach Tim McConnell was named Coach of the Year.

Malcolm led the team with a 16.8 scoring average. Malcolm also managed 4.1 rebounds, 2.9 assists and 2.1 steals per game. A Pitt recruit, she converted 56 percent of her field goals, 36 percent from beyond the arc. She cashed in on 65 3-pointers.

Malcolm surpassed 1,000 career points and was named the section’s MVP. She fired in 19 points in CV’s 62-40 win against Trinity in the WPIAL Class 5A final.

“Overall, Aislin had a great year but a particular good season during section play and the WPIAL final,” said McConnell.

“She’s a great shooter and a hard worker but more than that she’s a great leader for the team. In the locker room, basketball wise, in practice and off the court, she gets the girls to do the right thing.”

A Columbia University prospect, Page managed a double-double in PIAA playoff wins against Warren and Spring Grove then supplied a team-high 10 points and nine rebounds in a 51-27 loss to Cardinal O’Hara in the state final.

Page also excelled on defense. She contained Courtney Dahlquist, holding the Trinity star to five points during CV’s win against the Hillers in the WPIAL title tilt. Dahlquist averaged 17.9 points per game.

Page tossed in 18 points and pulled down 14 rebounds in the WPIAL final. She finished the year, averaging 15 points and 11.3 rebounds per game. Page also led the Colts in blocked shots. She dished up two assists and managed three steals a game.

“Perri had a great year and during the playoffs, she was our best player,” said McConnell. “Her athleticism, the ways she rebounds, gets to the rim and handles the ball like a point guard are her greatest assets.”

Hallie and Helene Cowan are twin talents that have also enabled the Colts to excel. In fact, CV owns an 82-4 record during their three varsity seasons. They joined Malcolm and Page on the section all-star list.

A pure shooter, Hallie averaged 11.3 points per game. She also dished up 2.4 assists, swiped 2.4 passes and pulled down 3.6 rebounds. Hallie converted 52 percent of her 2-point field goals, 32 percent of her 3-point shots and 91 percent of her free throws.

“Hallie is a great shooter,” said McConnell. “She does a lot for us.”

An unsung hero, Helene moved to the point guard position during the playoffs when their starter was lost because of the PIAA transfer rule. Helene led the Colts in assists with 3.2 and in steals with 2.8 per game. Helene also hauled in 5.2 rebounds an outing.

Helene averaged 8.5 points per game. She converted 60 percent of her 2-point field goals.

“I give Helene a lot of credit, especially for the way our team played during the playoffs,” McConnell said. “She kept balls alive. She defended the other team’s best player. She ran the point for us.”

Duo dominatesAshleigh Connor of Mt. Lebanon and Olivia Westphal from Bethel Park dominated the scoring in the region.

During the regular season, Westphal finished third with a 23.3 average while Connor followed in fourth position with 21.7 points per game. Both garnered conference first-team all-star honors.

The pair led their teams to the WPIAL playoffs and met in the quarterfinals where Lebo edged BP 59-58 in overtime. In the showdown, Connor tallied 28 points but Westphal fired in 39. She buried six 3-pointers, including the one that tied the game at 49 and forced the extra period.

A Duquesne recruit, Westphal finished her career with 1,631 points. She broke the single-game scoring record with 45 points when the Hawks beat Mars Jan. 21.

BP alum and head coach Jonna Burke set the previous mark before enjoying a Hall of Fame career at the University of Pittsburgh. She holds the career scoring record with 1,679 points.

“Liv has meant so much to our program these last four years,” Burke said. “She is an elite player who really came into her own this season. She has the ability to dominate a game and did that so many times for us. She will be greatly missed “

During the 2021 campaign, Westphal averaged 24.7 points per game. She led the Hawks to 15-4 record. During her tenure, the Hawks reached the WPIAL semifinals twice and the finals her junior year.

Meanwhile, Connor helped the Blue Devils to a share of the Class 6A, Section 2 title with Upper St. Clair. Both finished 6-0 in the division. Overall, Lebo managed a 17-4 record.

Connor garnered the respect of her adversaries.

“For me, Ashleigh is an MVP,” said Burke. “She is just so hard to guard. She is a crafty scorer and always seems to find a way to the foul line.”

Youth leads USCUpper St. Clair enjoyed a 15-3 season that featured an appearance in the WPIAL Class 6A championship game. Although the Panthers succumbed to North Allegheny, which went on to win the state title, they have many reasons to look forward positively to the future.

For starters, they return Katelyn Robbins. A sophomore, she led USC in scoring and in rebounding with 14 points and 8.5 boards a game.

USC will also feature Paige Dellicarri long into the future as she too is a sophomore. As a newcomer to the starting line-up, she has been recognized as The Almanac Rookie of the Year.

Dellicarri averaged 11 points per game and three, 3-point field goals. She led the team with 54.

“Kate and Paige both took on the scoring roles for our team this year,” said USC head coach Pete Serio. “They both stepped up and became our go-to players.”

Thompson starsFor two seasons, Journey Thompson has been Peters Township’s go-to girl. After averaging 16 points and 11 rebounds as a sophomore, Thompson increased her scoring average to 17.4 for the Indians, who finished 6-9 this winter.

A three-year starter and all-section selection, Thompson played on PT’s state championship squad as a freshman, averaging 12.9 points and 7.7 rebounds per game.

Back to formAfter missing much of her sophomore season due to an ACL injury, Emma Dziezgowski returned to form for Bethel Park. The junior forward garnered conference first-team laurels. She averaged 11.9 points and six rebounds per game.

“Emma is a work horse,” said Burke. “She never stops. She is the kid that is at the bottom of pile fighting for the ball. She came up big for us on many occasions this season.”

Maddie Webber of South Fayette completes The Almanac’s Elite Eleven list. The sophomore forward led the Lions to a 14-6 record that featured a 48-30 win against Connellsville in the WPIAL Class 5A playoffs. Webber fired in 11 points and dished up three assists per game.

“Maddie was instrumental in our success this year,” said SF head coach Brian Bennett. “She made big strides from her freshman to sophomore year.”