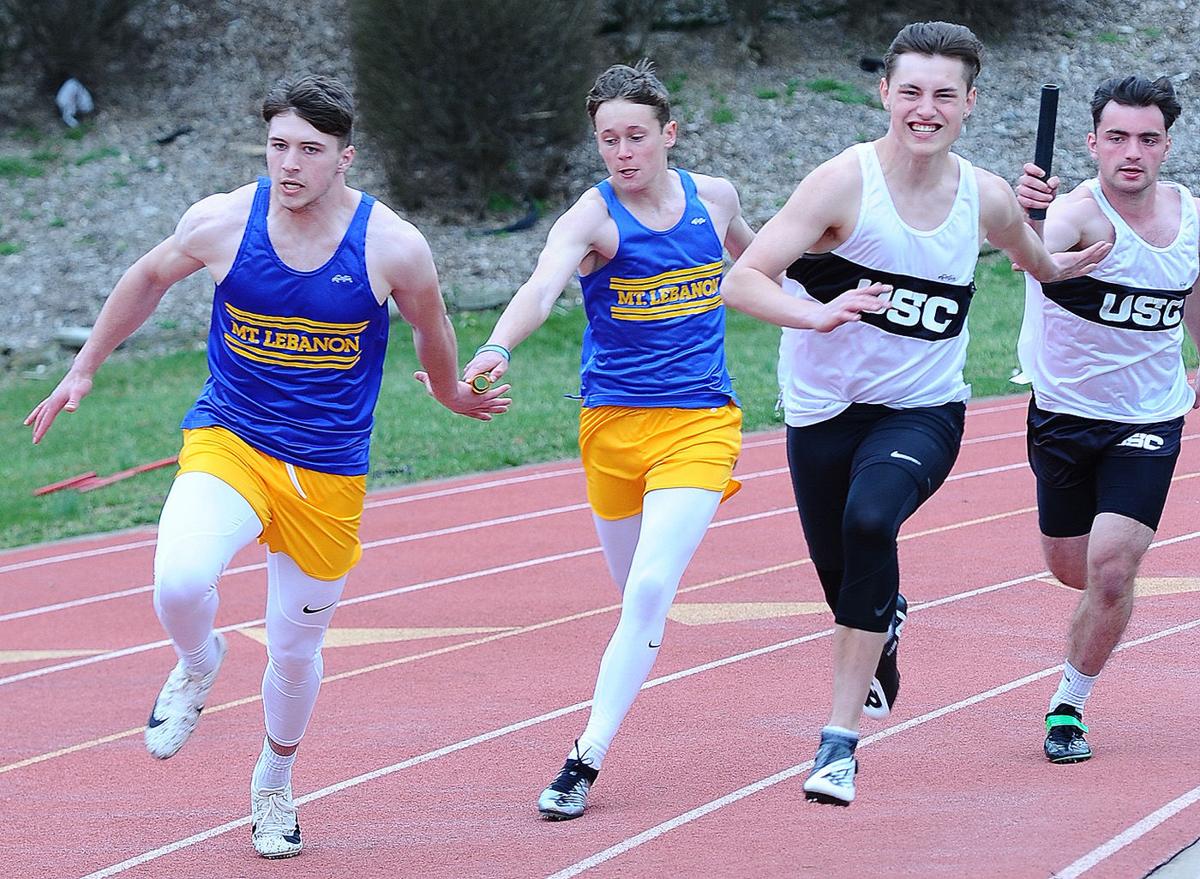 Upper St. Clair's Holden Ford reaches for the baton from Zachary Ioli while Mt. Lebanon's Nate Kirk places it into Mason Ventrone's hands as the tandems battle during 4-by-100 relay action. 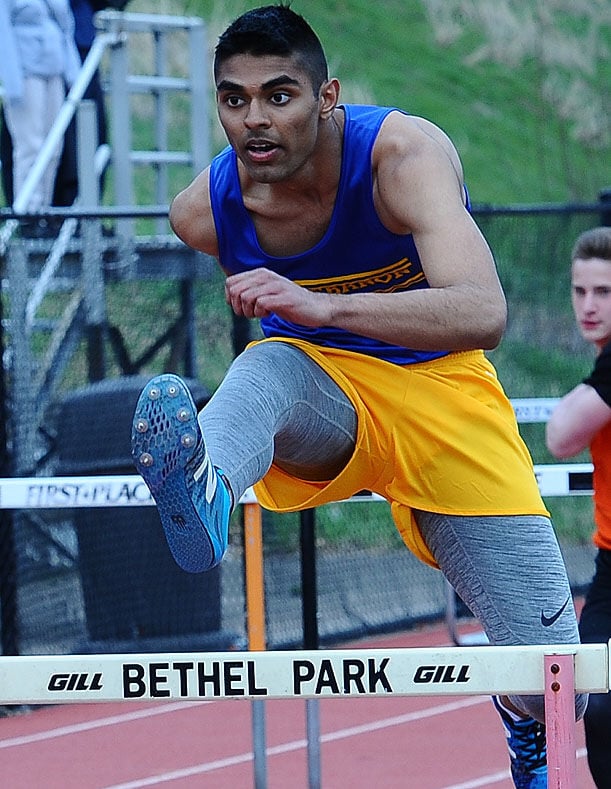 Anand Bhambhwani of Mt. Lebanon clears the hurdle during a tri-meet with Upper St. Clair and Bethel Park. Bhambhwani won the 100-meter hurdle event in 17.12.

Upper St. Clair's Holden Ford reaches for the baton from Zachary Ioli while Mt. Lebanon's Nate Kirk places it into Mason Ventrone's hands as the tandems battle during 4-by-100 relay action.

Anand Bhambhwani of Mt. Lebanon clears the hurdle during a tri-meet with Upper St. Clair and Bethel Park. Bhambhwani won the 100-meter hurdle event in 17.12.

If it appeared effortless for Elias Zajicek to win the 800-meter dash at the Tri-State Track and Field Coaches Association’s Meet last weekend at West Mifflin, it’s because the Chartiers Valley senior had already put in the leg work.

“Elias works really hard at being a good runner, putting in the miles, lifting weights, working on his sprinting, running form, etc. He also does the hard work in the off season to gain experience and to become a well-rounded track athlete,” Chartiers Valley track coach Lori Poe said.

Zajicek competes in age group track during the summer months. In those events, he has gained valuable experience competing in big meets and traveling out of state for competitions. He has qualified and participated in nationals multiple times in various events including the steeple chase.

During the fall, he runs cross country and was a PIAA finalist.

Zajicek also competes in indoor track during the winter. He ran a personal best time of 1:59.57 and qualified for the indoor state meet in the 800-meter run.

“All of these experiences have made him a great racer and confident in his abilities to race the best,” Poe said.

At the Tri-State Track and Field Coaches Association’s Meet, Zajicek was at his best. He approached the race as he has done with any other competition.

“From the start, he went out to win the race and he continued to get faster,” Poe said. “Elias continually rises to the level of competition.”

Because Zajicek is consistently running under two minutes in all of his most important competitions, his focus and training will change as May approaches.

“We anticipate his times dropping,” Poe said. “We expect Elias to challenge for the top spots at WPIALs and to qualify for states.”

Competing in the district and state races, however, won’t be easy.

“The 800 is a very competitive race, separated by hundredths of a seconds,” Poe said.

“He ended up in the slow heat of the 800, which is difficult to fight for a spot for states,” Poe said.

The experience inspired Zajicek. It has produced a more determined runner the Colts are seeing this spring.

“Elias wants to be in control of his race and leave nothing to chance,” Poe said. “Our goal is to stay in the top 10 rankings going into the championships, so he can be a top seed in the fast heat of the 800 and fight for a spot at states, be on the podium and race for a top three finish.”

Caleb Nelson and Doug Brady also had strong showings for Chartiers Valley during the Tri-State meet.

Nelson took second in the triple jump and sixth in the long jump. Earlier this spring, the junior finished fourth in the 100- and 200-meter dashes at the South Hills Classic. He won the triple jump at the Mt. Lebanon Invitational.

“Caleb is a top sprinter that also excels in jumping events,” Poe said. “We expect him to fight for a state qualifying spot in both (triple and long) jumping events.”

Brady finished eighth in the discus at Tri-States. The junior is not only strong in that event with a best throw of 132 feet, 9 inches, he ranks among the top shot putters with a mark of 40 feet, 6.5 inches this spring.

Poe also anticipates her boys 4x100- and 4x400-meter relays to fight for top qualifying spots at the WPAIL championship meet as well.

“Both teams have run well but we are still shuffling and mixing athletes to see what our best line-up is for those relays,” she said.

Kiki Thornton is enjoying a successful spring for the girls team after having come off a strong showings in the cross country and indoor track seasons.

The senior finished sixth in the 1,600-meter run at Tri-States. She was second at the South Hills Classic and fifth at the Mt. Lebanon Invitational. She has posted a season-best time of 5:25.78.

“Kiki is running well,” Poe said. “We anticipate her fighting for a spot on the podium and a trip to states at WPIAL Finals.”

Alyssa Dunn has also been running well but at the 400- and 800- meter distances. A cross country runner and an indoor track competitor, she did not compete at Tri-States, but finished fifth in the 400-meter dash at the South HIlls Classic with a time of 1:02.45 and took third in the 800-meter run at Mt. Lebanon with a time of 2:27.03.

Poe also anticipates Dunn will fight for a spot at WPIALs in both events.

Additionally, two freshmen are making their marks for the Colts. Haylie Francis and Perri Page are excelling in the triple jump. Francis placed second at Tri-States with a leap of 35 feet, 0.5 inches. Page placed second at the South Hills Classic with a mark of 34 feet, 9.5 inches.

“They look to be strong competitors for the WPIAL championships,” Poe said. “They are only beginning to perfect their event so it is exciting to see them excel so early. They will continue to get better as the season continues.”

Several other male area athletes picked up medals at the TSTCA Meet.

By event they included: