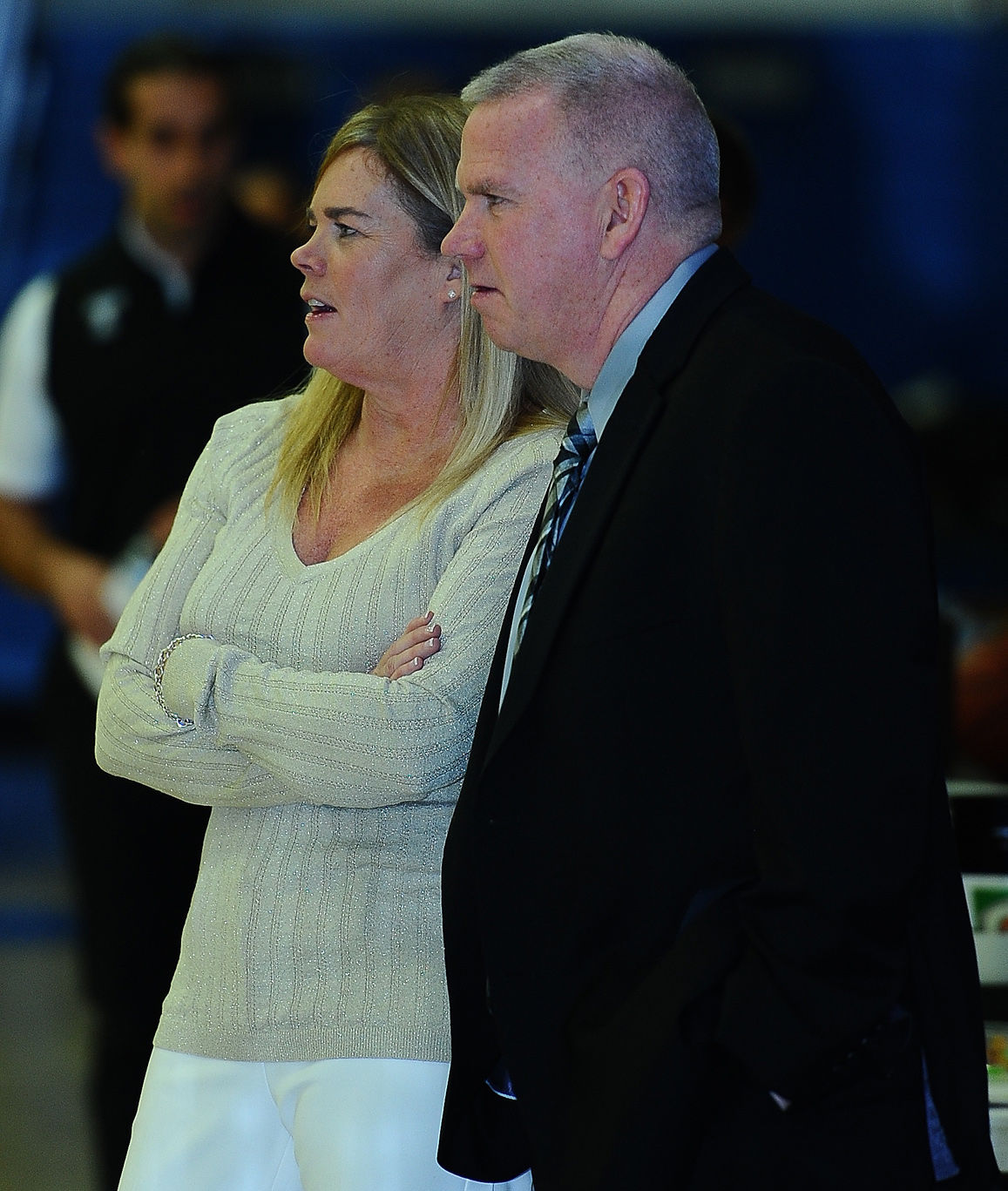 Siblings Kathy McConnell-Miller and Tim McConnell squared off against each other as Trinity and Chartiers Valley met in a section girls basketball game Jan. 2. 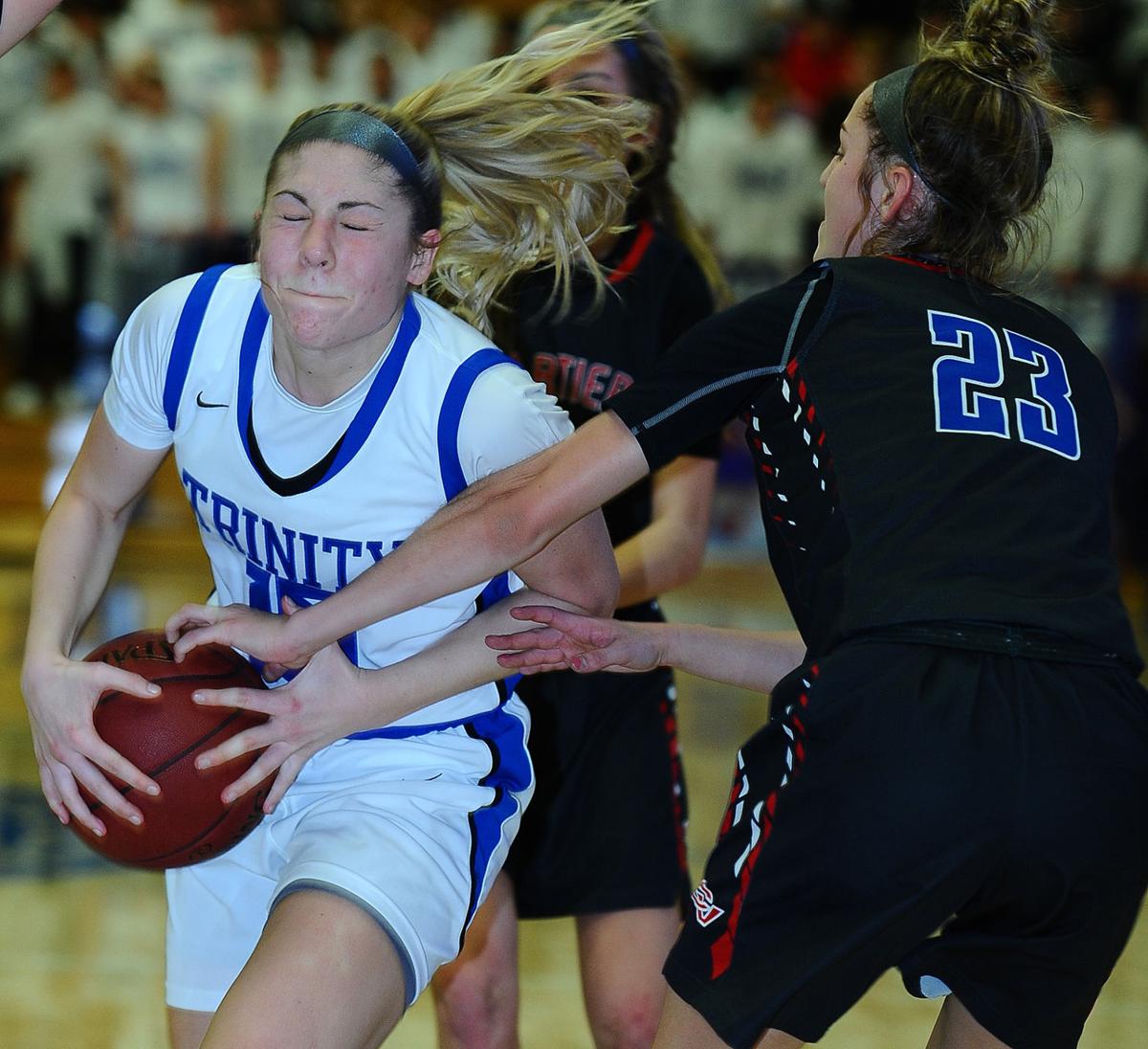 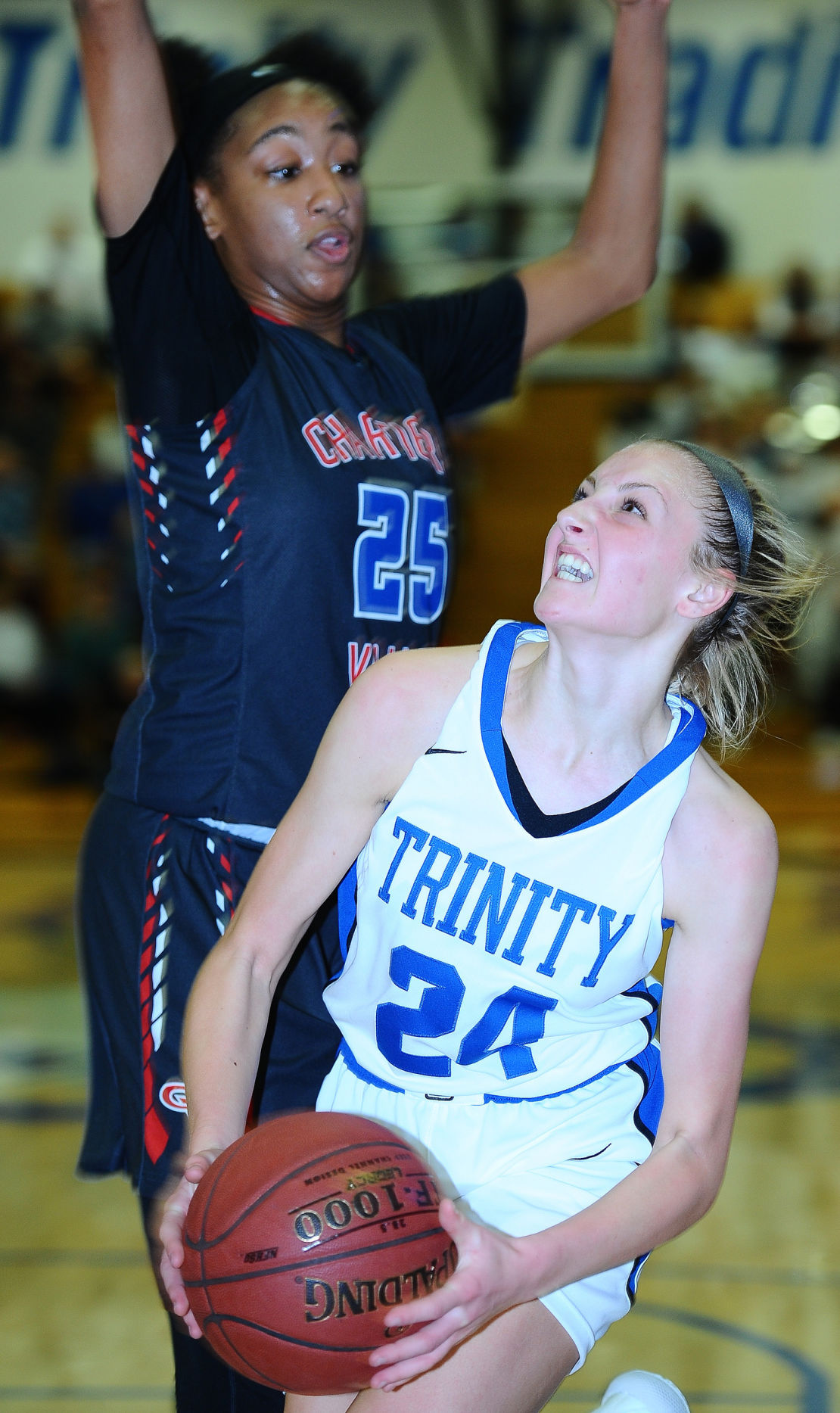 Trinity's Alyssa Clutter attempts to put up a shot while being defended by Chartiers Valley's Perri Page.

Siblings Kathy McConnell-Miller and Tim McConnell squared off against each other as Trinity and Chartiers Valley met in a section girls basketball game Jan. 2.

Trinity's Alyssa Clutter attempts to put up a shot while being defended by Chartiers Valley's Perri Page.

Megan McConnell found herself in an awkward position. Again.

Last year, she adjusted to having her father, Tim, coach her Chartiers Valley girls basketball team. With McConnell at the point, the Colts rolled up a 30-0 record, complete with section, district and state championships.

This year, the Duquesne University recruit found herself on the opposite side of a family feud. Her aunt, Kathy McConnell-Miller, now coaches CV’s chief rival, Trinity.

Megan used to attend Kathy’s summer camps when she and her other aunt, Suzie McConnell-Serio, coached the Duquesne University women’s basketball team.

“It was different,” Megan said about playing against McConnell-Miller Jan. 2. “I mean, I am not used to seeing her coach high school basketball, but I knew definitely it would be a good game, a tough game, because she would have them ready for us. We gave it all we’ve had because we knew we would get their best game.”

The daughter-father unit and her teammates handled the Hillers’ best punch by submitting a superior showing when it mattered most. Though Trinity took a brief lead, 41-39, into the final quarter, Chartiers Valley prevailed, 62-56.

A relieved Tim McConnell relayed how difficult it was square off against his sister following the game.

“It’s hard to coach against Kathy,” he said. “You don’t ever want to beat a sibling or relative, but I knew when she got the job it was going to be a battle because I know how she coaches and what she is all about.”

McConnell-Miller is all about guiding the Hillers at the scholastic level despite her experience at the collegiate and professional level. She was thrilled to host her brother and his team.

“It’s always exciting because a lot of family comes to games,” she said. “It was exciting to have them at Trinity and see the school and share in the student body and see what my world is like out here. I really like that.

“But,” she added, “it’s basketball. You got to get back in the gym and watch film and see what we did well and see where we need to improve.”

What the Hillers did best was chip away at an 11-point second quarter CV lead by getting the ball inside to Courtney Dalquist. She scored nine of her 10 points in the first half.

“I thought we were settling for threes and shots that were not within ourselves and then we decided to go inside and give Courtney some touches,” McConnell-Miller said. “She did a great job of being effective around the rim and taking it straight up against their big.

“In the second half,” she added, “we stopped doing that. We started settling again. We were super effective getting the ball inside and making them guard the inside. They made adjustment. We, unfortunately, didn’t continue to do what worked in the first half.”

CV, however, tightened up its defense. Plus, a few of the Colts’ inexperienced players settled in to playing in front of a packed house.

“We were not defending well and we got into foul trouble. We are not a good team when I have two of my starters on the bench with three fouls. We needed to do a better job of defending and taking them out of what they do,” said McConnell.

“Plus, I don’t think we played the way we have all year,” he continued of the Colts, who are off to a 9-0 start that has included a championship at the KSA Classic in Orlando, Fla., over the holiday break. “We were tentative, especially my twins. I got on them a little bit. I wanted them to play with the confidence that they have.

“When I sit back and reflect on it, they are only sophomores that hardly have any varsity experience last year and I am throwing them into the fire and I am expecting them to do a job out here against a packed house, a great crowd but I couldn’t be prouder of my girls and the way they persevered and fought back.”

Hallie Cowan fought back and finished with 18 points, 12 off 3-point field goals. She knocked down a pair of treys in the pivotal fourth quarter. Cowan’s twin, Helene, provided a critical hoops as CV surged into the lead, 14-12, after one quarter. She added a free throw in the final frame, where the Colts were 10 of 12 from the line.

Aislin Malcolm led the Colts with 20 points. She scored nine in the fourth quarter. Megan McConnell pitched in 14 points while Perri Page finished with seven points.

The victory kept the Colts’ winning streak in tack. They have won 39 games in a row.

McConnell noted, however, the win over the Hillers was pivotal because they are ranked No. 2 right behind CV.

“Of all the games, this was most important,” he said. “If you want to win the section, this game was important to us to have a one-game lead. This type of game is very important to make a playoff and state run. We’ll look back on this and talk about some of the things we did well and things we didn’t do well and learn from them and get better.”

McConnell expects the rematch on Jan. 27 on the Colts’ home court will be equally taxing, but in the end he and his sister will always be allies.

“It’s a battle when the game’s going on but win or lose, we hug and we’ll talk again and keep moving on.”

The Hillers, who were led by Riley DeRubbo’s 24 points, have also moved on. McConnell-Miller anxiously awaits the second encounter for multiple reasons.

“There was a lot of excitement surrounding the game based on the fact that this was my first high school game coaching against my brother. But we had our kids prepared. They were excited for the match, regardless of who was coaching, because these teams are very familiar with each other and they are starting to develop a nice little rivalry. Between team members, there is a lot of respect and a lot of excitement around this game, typically.”

One reason is the players are teammates during the offseason. Megan McConnell plays on the same AAU squad in the summer with DeRubbo, who is a Fordham recruit.

Regardless, as the defending state champion with an extended winning streak, the Colts have a bull’s-eye on their backs.

“Every team wants to beat us,” said Megan McConnell. ‘They are going to do everything to stop us because everybody wants to be our first loss. It’s tough having that on your back. But that’s what’s special about us. We want it 10 times more.

“No matter who is out there on the floor, we all play together. We have good chemistry and I think that is what makes us gel so well. We play. We are sisters outside of basketball and that helps us on the court because we are always there for each other and we pick each other up. I think that is a big part of why we play so well together.”