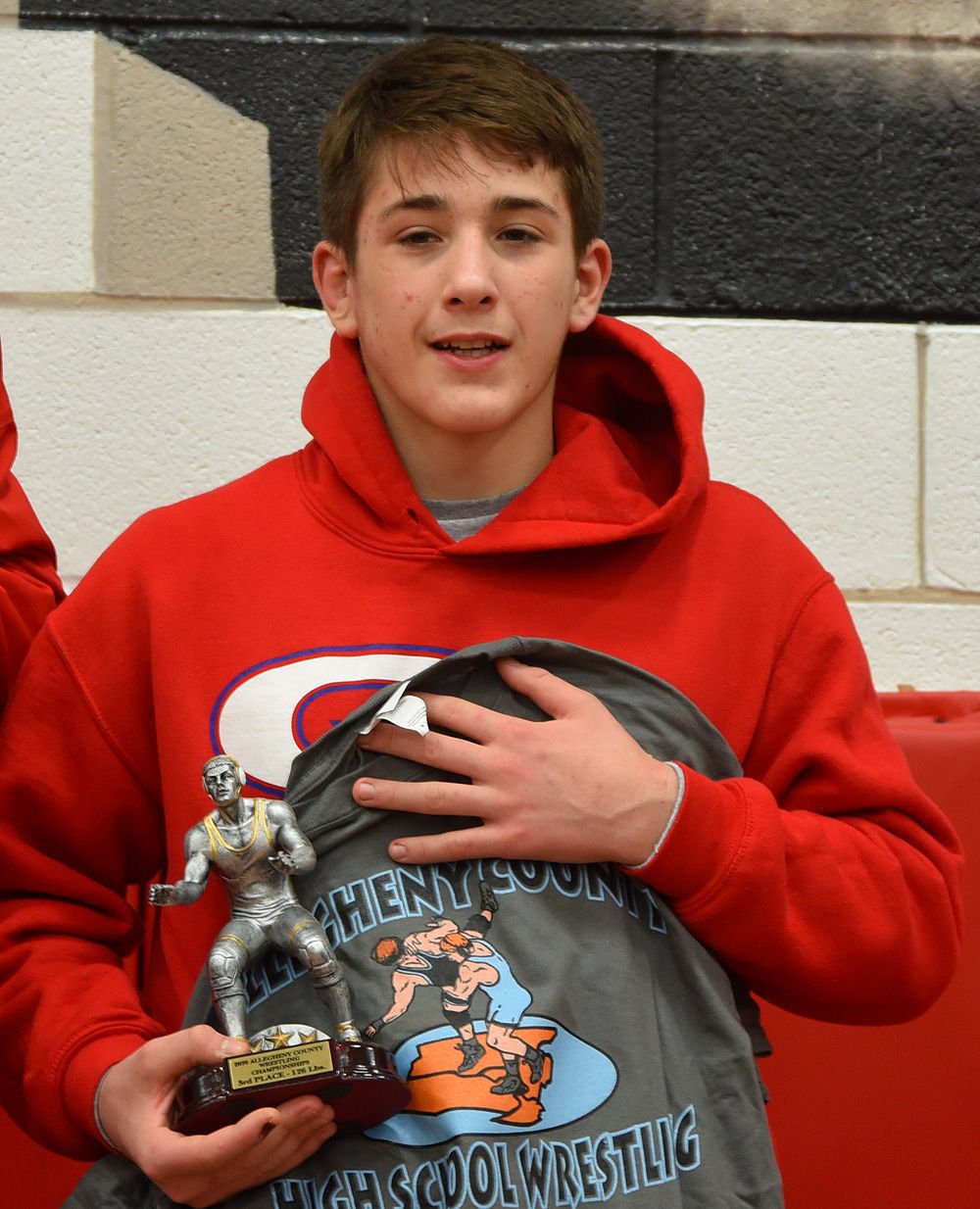 Dylan Evans displays the hardware he picked up during the Allegheny County Tournament. The Chartiers Valley freshman finished third overall in the 126-pound weight class. 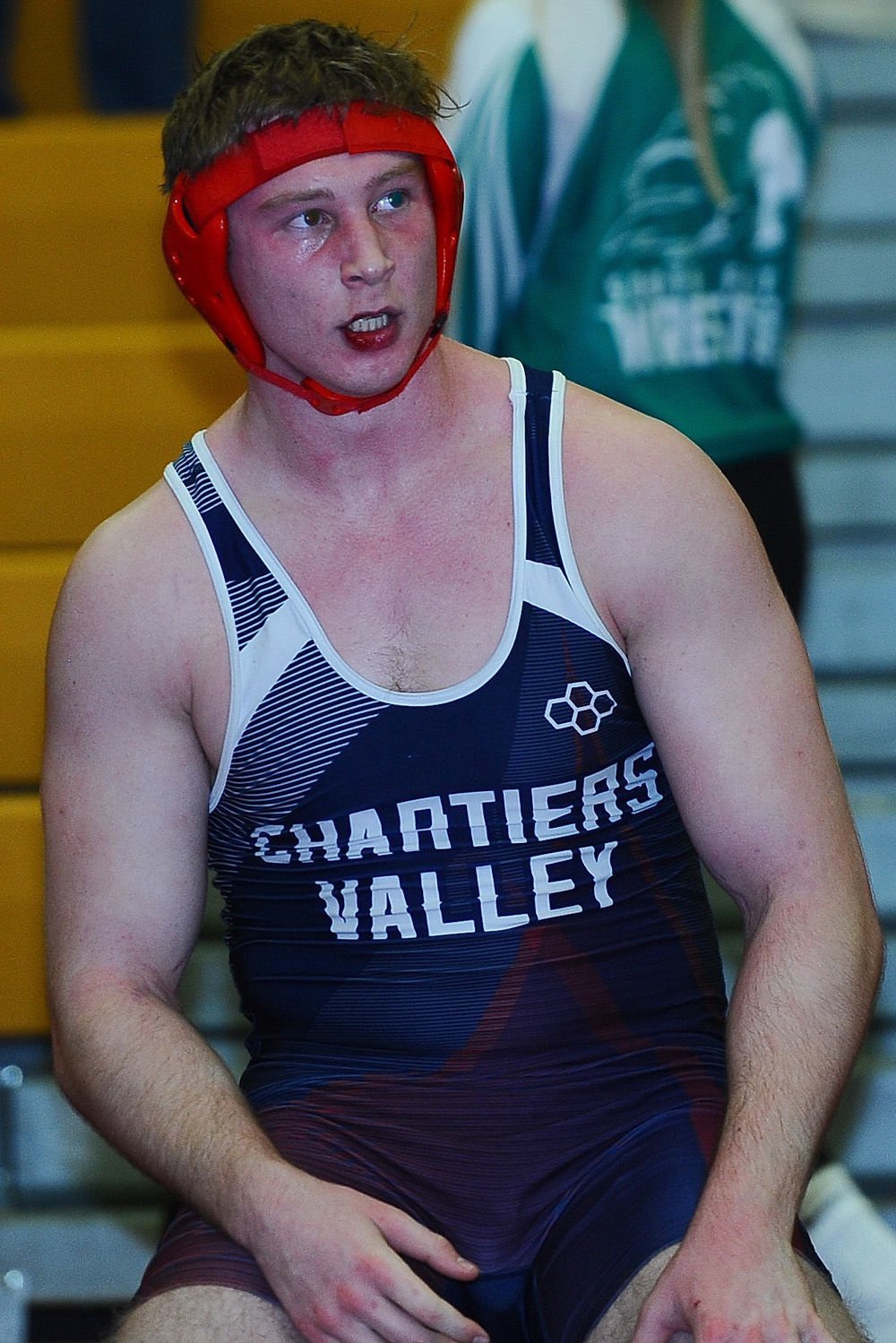 Josh Sarasnick was a bronze medalist and helped Chartiers Valley to a third-place finish as a team during the Allegheny Country wrestling tournament.

Dylan Evans displays the hardware he picked up during the Allegheny County Tournament. The Chartiers Valley freshman finished third overall in the 126-pound weight class.

Josh Sarasnick was a bronze medalist and helped Chartiers Valley to a third-place finish as a team during the Allegheny Country wrestling tournament.

Chartiers Valley picked a difficult path, but the move paid off as the Colts captured the third-place team trophy during the Allegheny County wrestling tournament held Jan. 18-19 at Fox Chapel.

After the first day of competition, Chartiers Valley head coach Billy Evans watched as a handful of his wrestlers lost quarterfinal match-ups, dropping them into the wrestle backs.

Yet his Colts responded, finishing with two bronze medals, a pair of fourth- and fifth-place finishes and an eighth-place prize to earn All-County honors and compile a 173-point score, enough to edge Mt. Lebanon for third in the team standings. Pine-Richland edged North Allegheny for the top spot.

“We lost a whole bunch in the quarterfinals and as a coach you can really lose your mind,” Evans said. “‘Oh my, we are like falling apart,’ I said to myself, but when I went back into the locker room to talk to the guys to tell them the sun will come up tomorrow, they were real positive about getting back at it. They were excited.”

“They told me. ‘Coach, we’re going to get this’ and they did,” he added. “They showed up and really wrestled hard in the wrestle backs. They did a great job. I’m really proud of them all.”

Though the Colts had no wrestlers in the finals, they put seven on the podium.

Evans fell to Ryan Michaels, 5-4, in the quarterfinals. The Elizabeth-Forward senior, who was a third-place finisher in the PIAA last year, went on to capture his second county championship.

Evans recovered to win three matches for third place. After picking up a pin in his second consolation bout, he posted a major decision against Pine-Richland’s Robert Palmiere, 9-1, for the bronze medal.

Sarasnick also dropped a narrow match, 6-5, to Andy Mellinger of McKeesport in the quarterfinals, but responded with three consecutive falls for his bronze. Sarasnick felled Jake Barbabella from Avonworth in 2:11 in the third-place match.

“I am really proud of Dylan and Josh for wrestling back and making the best out of their situations,” Evans said. “They both dropped tough matches in the quarters and with young kids, that can be very disheartening to have to come back the next day and wrestle through the (consolation) bracket. So I am really proud of them.”

Evans was equally pleased with CV’s Ashton Sadowski and Christopher Beatty for finishing fourth at 113 and 145, respectively.

“Ashton got himself in a hole early and found it hard to dig his way back after that,” Evans said. “He’s got to find some points there. Maybe get on the board with the take down in the first period and then set the pace in the match.”

“That was a great match,” Evans said. “Freddie is a great wrestler and those two went at it. It was a good, hard-fought match, but C.C. came up a little short.”

Brady Jolling and Donovan O’Malley did not. They won their fifth-place consolation matches. Jolling pinned TA’s Jacob Golberg in 4:45 at 106, while O’Malley edged Hampton’s Jayden Resch, 5-4, at 195.

“It was good to see a lot of mat time,” Evans said of the county meet. “It’s about wrestling for yourself, but now we go back to wrestling for our town. We talk about how important it is to wrestle for your town.

The Colts did their communities proud as they defeated the Indians, 52-26, in the Section 4-AAA tournament and qualified as the No. 5 seed out of the division for the WPIAL team tournament, which commences Jan. 27 and concludes Feb. 1 with the championships. South Fayette, a 40-33 winner over Trinity, finished third while Waynesburg toppled Canon-McMillan by criteria, 31-30, for the section title.

“I am really, really super proud of the great job my wrestlers are doing,” Evans added. “At the county meet, we only graduate one medalist. That’s really exciting. I hope it’s a team of the future.”

The Lions finished ninth in the team stands with 142 points. The Black Hawks were 16th with a 102.5 score.

Fischer picked up a pin and technical falls before slipping past Evan Whiteside from Gateway, 3-2, in the semifinals.