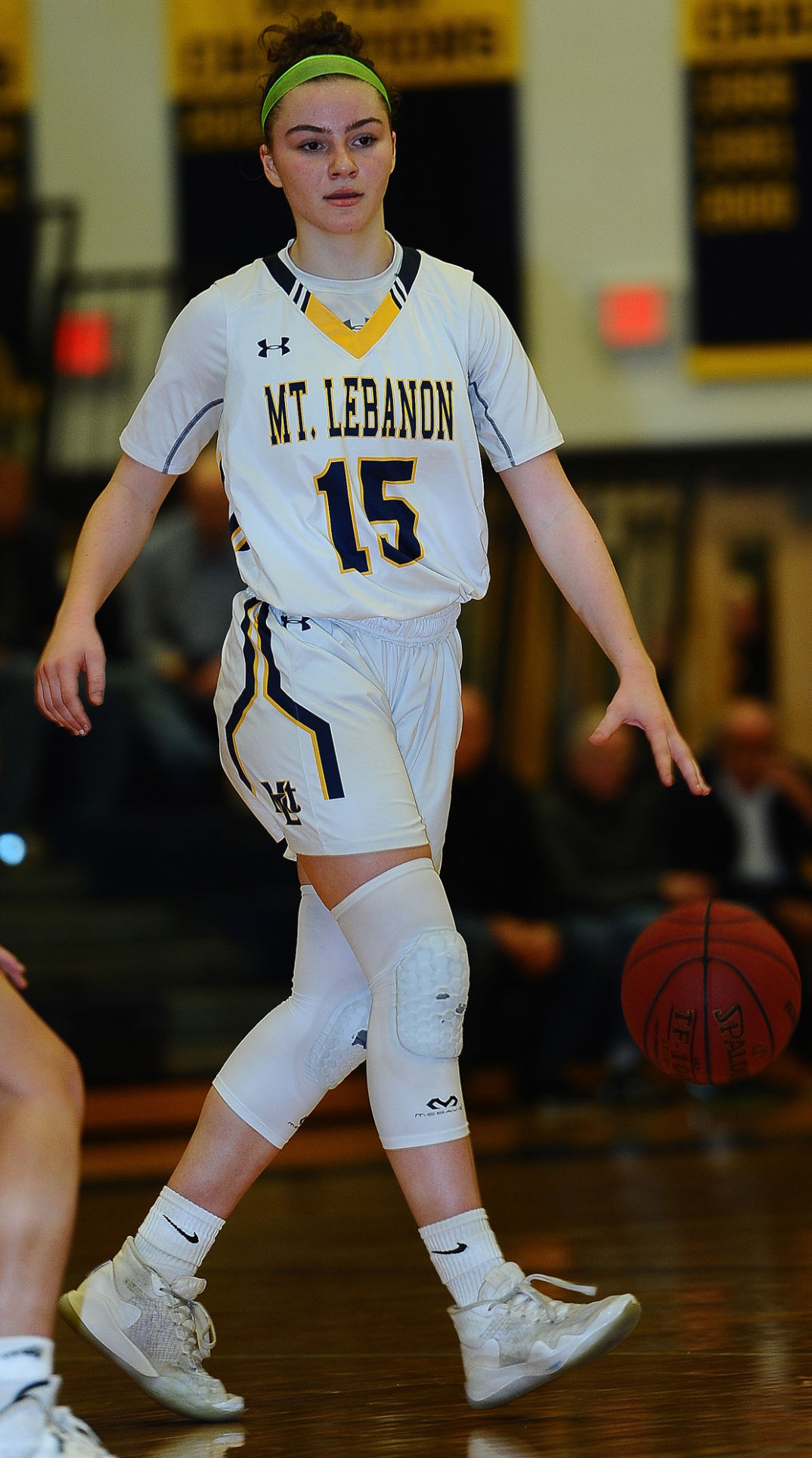 Ashleigh Connor ranks among the WPIAL scoring leaders with her 22-point average this winter for the Mt. Lebanon girls’ basketball team. 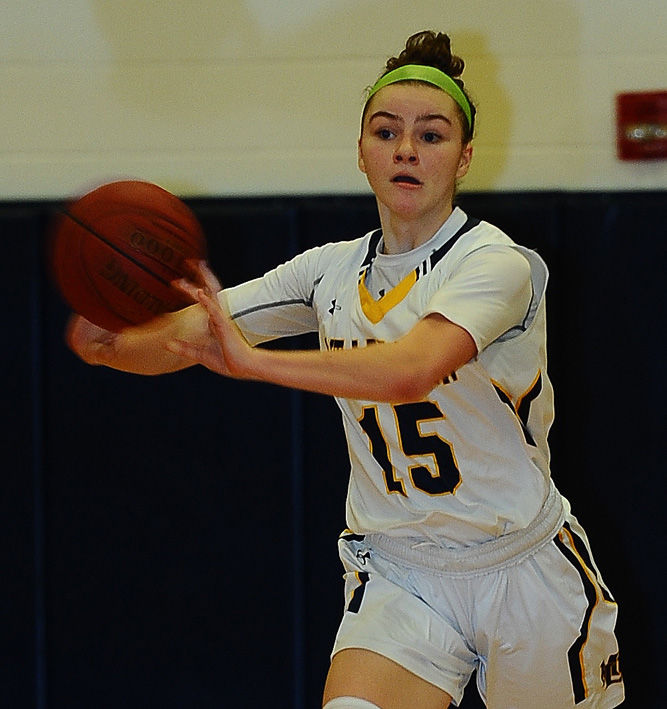 Ashleigh Connor ranks among the WPIAL scoring leaders with her 22-point average this winter for the Mt. Lebanon girls’ basketball team.

Off the court, she’s not much tamer.

Connor aggressively attacks her academics, averaging all As in her classes. She’s a member of National Honor Society and student council. She’s also a highly sought after Division I basketball recruit with interest from Davidson, Princeton, Lafayette and Northern Kentucky already apparent for the potential engineering student.

Before she watched a documentary on lions, Connor said she was like most people who thought they knew about them, particularly that they are big and vicious.

“When you meet them though they are sweet,” she said recalling the video. “I may not be the sweetest thing on the basketball court, but otherwise I am nice.”

The beast in Connor has Mt. Lebanon in a nice position.

Thanks to her 22-point scoring average, which ranks fourth in the WPIAL, as well as her 2.5 assists and six rebounds per game, Connor has the Blue Devils vying for a Section 2 title as well as preparing for a run at a WPIAL championship. The Blue Devils were 13-3 overall and 8-1 in section heading into their critical showdown Jan. 23 against undefeated Bethel Park.

“Ashleigh has been playing well,” said Lebo head coach Dori Oldaker. “She loves the game of hoops and our team feeds off her energy. She continues to improve and mature with her game.”

Because she is just 15 years old, Connor likely will improve to the point that she becomes the most heavily recruited player in the program’s history since Madison Cable. Cable helped the Blue Devils capture three PIAA state championships from 2009-2012 before going on to play at Notre Dame.

“It’s nice to be mentioned in the same breath as her,” Connor said. “What Madison did was definitely amazing and I would like to try and achieve that.”

Connor said she has met Cable and that the Blue Devils’ alumna has helped her with negotiating Division I recruiting.

Connor said she is motivated to be like Cable because of her success with the Fighting Irish who reached the Final Four each year of her collegiate career.

“I know (Madison’s) name is well heard around here so I know that I would like that … to have your name float around long after you are gone,” Connor said, “but I try to do what I know I can do. What she did was amazing for her, but being me is good too.”

Oldaker said Conner has many attributes that often add up to greatness on the basketball court.

“Ashleigh is extremely coachable and wants to be coached up to improve her game,” Oldaker said. “She is the ultimate competitor. She hates losing at anything.”

Even to a sibling.

Connor has an older brother, Gunner, who is a senior at Our Lady of Sacred Heart. He excels at basketball, baseball and golf at the Moon Catholic high school.

Connor, who began playing sports at age 5, said she and her brother always play one-on-one.

“I love it. It was fun to take him on,” she said. “In my opinion, the best player is me, but the court is the one that decides that.”

The courts have been kind to Connor.

The 5-10 center started last season for the Blue Devils. The Almanac’s Rookie of the Year and all-section performer averaged 10.6 points and 3.1 steals as a freshman.

Connor also plays AAU basketball as a member of the Western Bruins for three years. Last year, the team finished fifth in the nation among the freshman/sophomore combined squads.

When she isn’t practicing with the Blue Devils, Connor is at home working on her game with her father. Both her parents, Tara and Scott, played at the scholastic level before pursing engineering degrees in college.

Connor said she works on creating shots off the dribble or finishing with contact with her father.

“Different things that you will see in a game,” she said.

Conner said practices with the Blue Devils focus on the team aspects of the game. She said Oldaker makes the sessions interesting and fun.

“They are never boring,” she said of Mt. Lebanon’s practices.

Connor said practice has been the secret to her success. She said she excels on defense — averaging three steals a game.

While improving her own game is a priority, Connor said she maintains another important goal.

“Definitely winning a WPIAL championship and state title would be really cool,” she said. “We are going to try and go as far as we can, but this team has such great potential. We are really young. We are learning a lot this year, so hopefully we will have remembered it all for the next years, too.”

Color: Green or blue. “I like all the shades of blue and I have a lot of clothes that are green. I think it looks nice on me.”

Movie: Star Wars. “The whole series. When we went down to Ohio for a tournament the whole team watched it.”

Music: “I don’t listen to music but my friend, Morgan Palmer, makes the best play lists. She gives them to me. So I will listen to those.”

Dream Destination: Bora Bora. “I’ve seen a ton of pictures and videos about it. It’s looks so nice there.”

People might be surprised to know this about you? “I’ve been to Australia and my brother plays basketball, baseball and golf at Our Lady of the Sacred Heart. He’s pretty good. In my opinion though the best basketball player in the house is me but the court is the one that decides that.”

Person with whom you would like to have dinner? Steph Curry. “I think it would be neat to know what’s it like being him and how he got to be where he is.”

Who would play you in a movie? Morgan Palmer. “She knows me better than I know myself. She was one of the first people I met when I moved to Mt. Lebanon and we hit it off. We are basically like twins.”

What you want to get around to doing? Mission Trip to Haiti. “My friend (Ellie Kovalan) has an older sister (Grace) who has been going down there. I think it would be interesting to go there and see all the kids that she has helped.”

If I wasn’t playing basketball, I would be: Skiing. Or another sport just to stay active.

Life lesson basketball has taught you: Never give up and trust your teammates. They always have your back in the end.