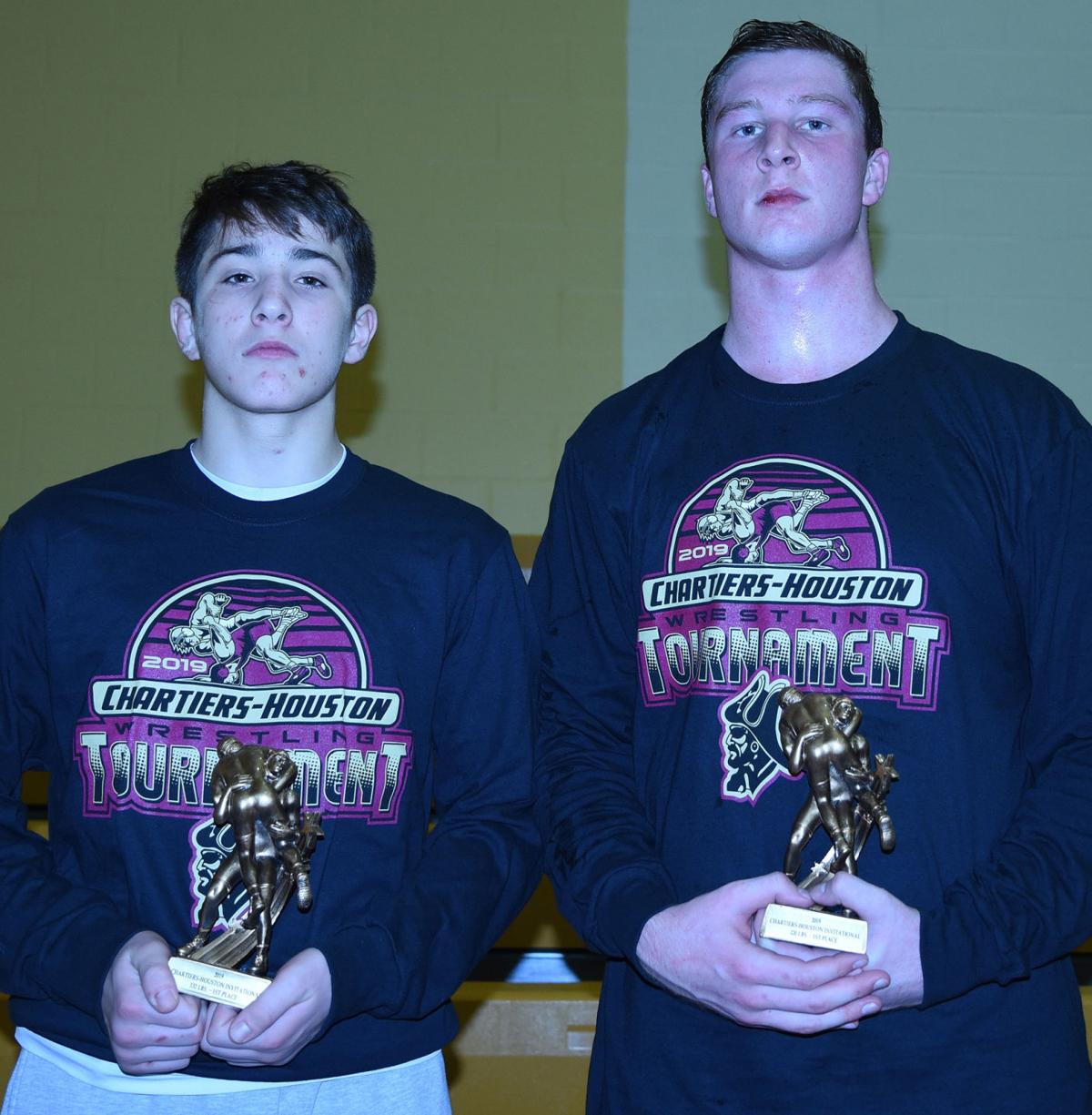 Daryl Evans and Josh Sarasnick pose with their trophies after winning their respective weight classes during the Chartiers-Houston Invitational. 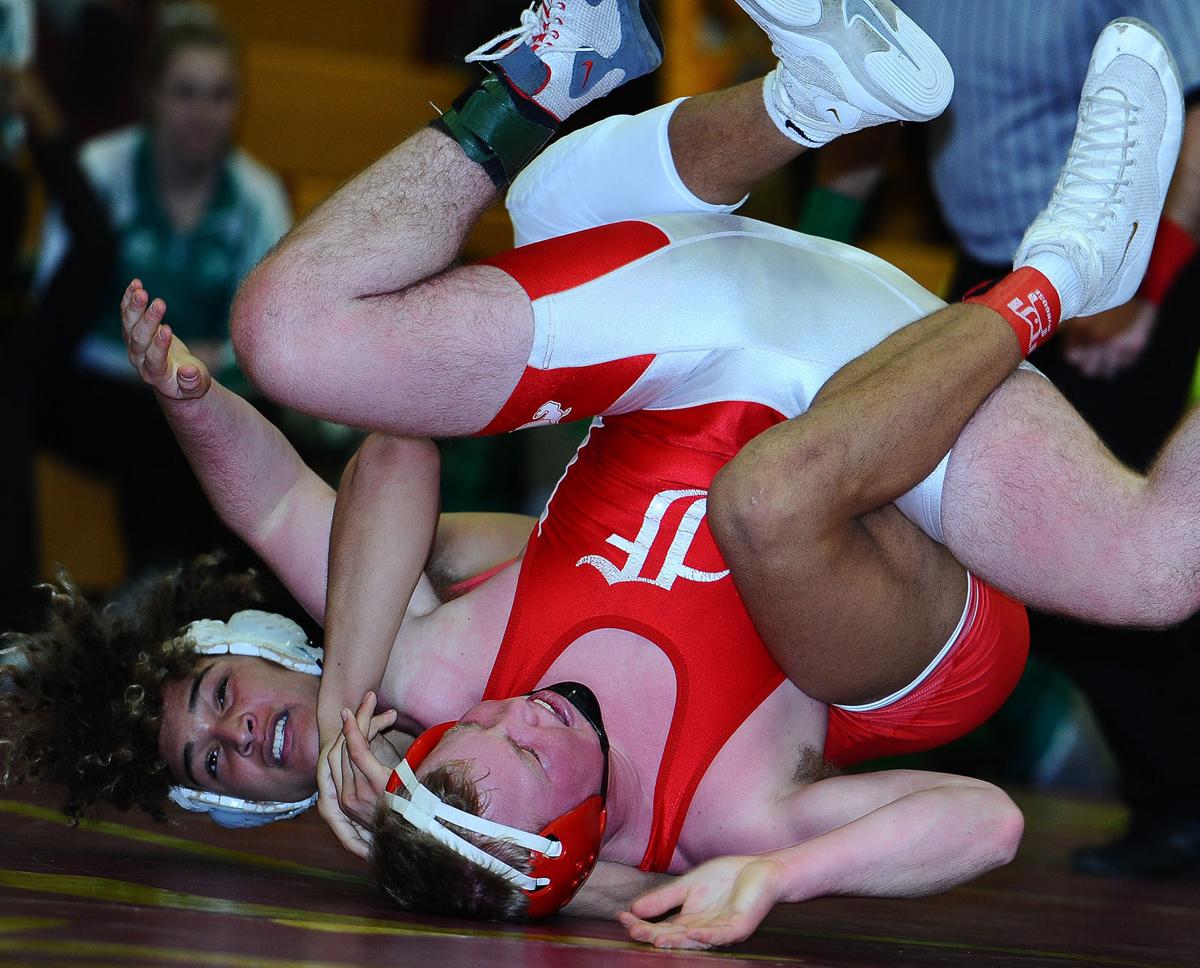 Donovan McMillon puts Trent Schultheis on his back during the 182-pound championship bout at the Chartiers-Houston Invitational. McMillon defeated Schultheis for the title. 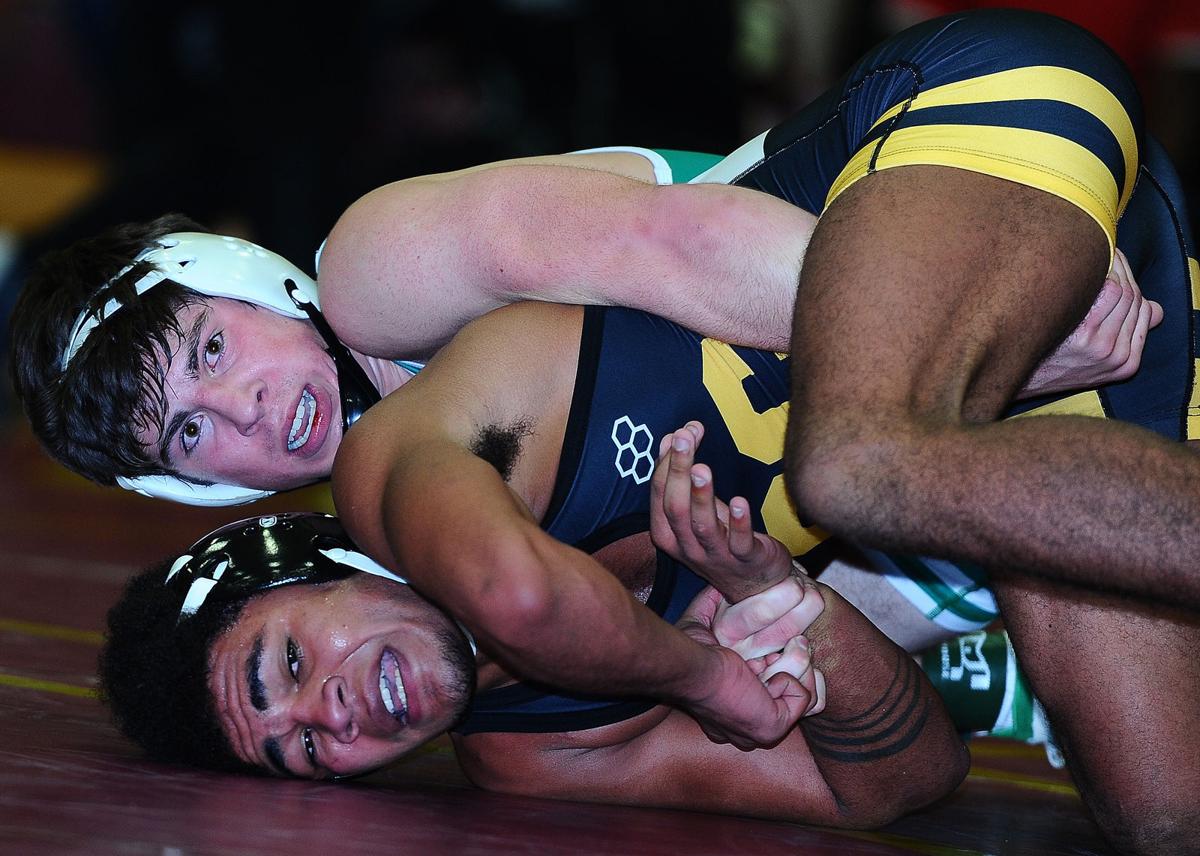 Eli Brinsky of South Fayette maintains a strong hold on Daiveon Say of Grove City during 170-pound finals action in the Chartiers-Houston Invitational. Brinsky scored a 5-0 win to capture the title.

Daryl Evans and Josh Sarasnick pose with their trophies after winning their respective weight classes during the Chartiers-Houston Invitational.

Donovan McMillon puts Trent Schultheis on his back during the 182-pound championship bout at the Chartiers-Houston Invitational. McMillon defeated Schultheis for the title.

Eli Brinsky of South Fayette maintains a strong hold on Daiveon Say of Grove City during 170-pound finals action in the Chartiers-Houston Invitational. Brinsky scored a 5-0 win to capture the title.

With two champions and four additional place winners at the Charters-Houston Invitational, one can understand why Billy Evans was thrilled with Chartiers Valley’s start to the wrestling season.

The Colts’ fourth-place showing in the team standings (157.5), and just seven points away from runner-up honors, was indeed a result of both young talent and hard work in the mat room.

“They also train each other well. I think that’s the other great thing about them. They buy into the idea of training their partner.

“I coach the team but if we are working on a certain drill, they are training the other guy. I see our guys helping each other and getting into each other’s ear saying “you got this. keep going” and I love that. They buy into that idea of helping the other guy get better on the team and I think that is starting to show.”

It certainly showed in CV’s results in the 29-team tournament, which was won by Butler with a 184 score. Pine-Richland took runner-up laurels with 164.5 points and Burgettstown took third (161.5)

The Colts, however, were one of only two teams, the Rams were the other with Anthony Ferraro (106) and Cole Spencer (160), to secure the highest spot on the podium.

Dylan Evans claimed the 132-pound weight class. The freshman, who is also the son of Coach Evans, defeated P-R’s Kelin Laffey, 3-1, in his championship match. He scored tech falls in his semifinals and quarterfinal matches.

“As a father, of course, I am proud of Dylan but as a coach I’m very happy for him and absolutely pleased with his performance because he beat some quality opponents along the way. Dylan definitely rose to the occasion and wrestled really well.”

Evans, who was the Greco-Roman national runner-up and Freestyle national champion in the 14U age group this summer, went toe-to-toe with Laffey, who although just a sophomore was a match from going to the PIAA championships last year. Laffey was also all-county and a high-placer in the section said Evans.

The win was not without its flaws. Evans said that CV’s 132-pounder could have opened up the match a little better had he not let Laffey hold onto his wrist.

“That took away some offense,” he explained. “We are going to have to talk about that. Just from a coaching standpoint. But overall, I’m really, really pleased with the way he wrestled. For his first week as a varsity wrestler, I think he handled it very well.”

Evans cited stamina and ability to overcome adversity as the difference makers for Sarasnick, who recorded first-period falls in his semifinal and quarterfinal matches.

Of the championship match, Evans said, Sarasnick “panicked” a bit early. When he thought he was going to give up a stall warning, he pulled Thompson on top of him “for a reversal and all those back points” leading Evans to point out how one has to keep their head in the match.

“You could see by the end of the match the other kid was tired and our guy still had a little bit more left in the tank,” Evans continued. “That was the difference.”

Another difference is youth is on Sarasnick’s side.

“Josh though is just a baby sophomore,” Evans explained. “I love where his trajectory is as a wrestler. I think there is a lot of big things to come from him.

“I love Josh. He gets out there and he gets after it. He’s really strong. His hard work showed there because he wore the other wrestler out.”

Christopher Beatty wore down Steve Butler and scored a major decision, 13-5, in winning the consolation match in the 152-pound bracket while Ashton Sadowski finished runner-up at 113. Brady Joling finished fourth at 103 and Donovan O’Malley added fifth place at 182 to complete CV’s list of place winners.

“We have some nice, young talent on our team,” Evans said. “We are just trying to build around it. It’s an exciting time for us. We are really catching some traction.

“There are a lot of good teams out there but we can compete. Hopefully in a little while we will be making trips to Hershey. Some of these kids are more than capable of making that jump to get on that podium at Hershey potentially.”

Donovan McMillon of Peters Township and Eli Brinsky from South Fayette were The Almanac’s only other area champions at the Chartiers-Houston Invitational.

McMillon decisioned Trent Schultheis of Freedom, 10-6, in the 182-pound championships while Brinsky blanked Daiveon Say of Grove City, 5-0, for the 170-pound title.

The Indians and Lions finished ninth and 12th in the team standings with 109 and 90 points respectively.

PT had two runners-up in Bryce Wilkes at 126 and Will Kail at 138. Kail lost to Sam Hillegas of North Hills, a two-time state champion. Henry Meyers finished fifth at 106 for the Indians.

In addition to Brinsky, the Lions placed two other wrestlers on the podium–James Anderson, runner-up at 103 and Cohlman Carpenter, sixth at 113.

Five was the lucky number for Mt. Lebanon during the Eastern Area Wrestling Tournament held at Gateway High School.

The Blue Devils put five grapplers on the podium and the squad took home a fifth-place team trophy.

The Stout brothers both won championships. While Luke dominated the 195-pound weight class, Mac claimed the 170-pound title as well as the Outstanding Wrestler award.

Allemang also predicted that the two Lukes “will likely see each other a few more times” during the season. Both were place winners at the PIAA championships in March.

Lebo’s Jackson Gray took third place at 145. He lost in the semifinals to Mason Spears from Franklin Regional High School, but was able to wrestle back and win his consolation match.

“They both had to win some gritty matches to keep advancing through the tournament and I was impressed with their composure and maturity,” Allemang said. “Kade, is only a freshman so that is very promising and hopefully a sign of good things to come for him.”

Once the Blue Devils address a few issues that surfaced in their first outing of the season, Allemang is confident even more good things are in store. Lebo did not have an entry in the 113 or 182 weight classes and their 120-pounder did not make weight on Day 2 of the tournament. According to Allemang, those three weights were the difference between finishing fifth as opposed to pushing for a possible third-place showing in the team standings.

“We need to address those weight classes,” he said. Allemang also noted “some missed opportunities” that prevented Lebo from putting more guys on the podium.

“It is early in the season and this weekend exposed some areas we need to address. Those corrections will be made,” he guaranteed, “and we will keep trying to get better each time we take the mat.”

After a visit to Baldwin on Dec. 18, the Blue Devils will host Chartiers Valley at 6 p.m. Dec. 21 during its fourth annual Alumni Recognition Event. Former competitors, managers and coaches will be feted at 5:45 p.m. prior to the match. A social at Duke’s Rib House & Grille on Cochran Road will follow.

For further details on the event contact BLewis@mtlsd.net or rwgray@verizon.net.