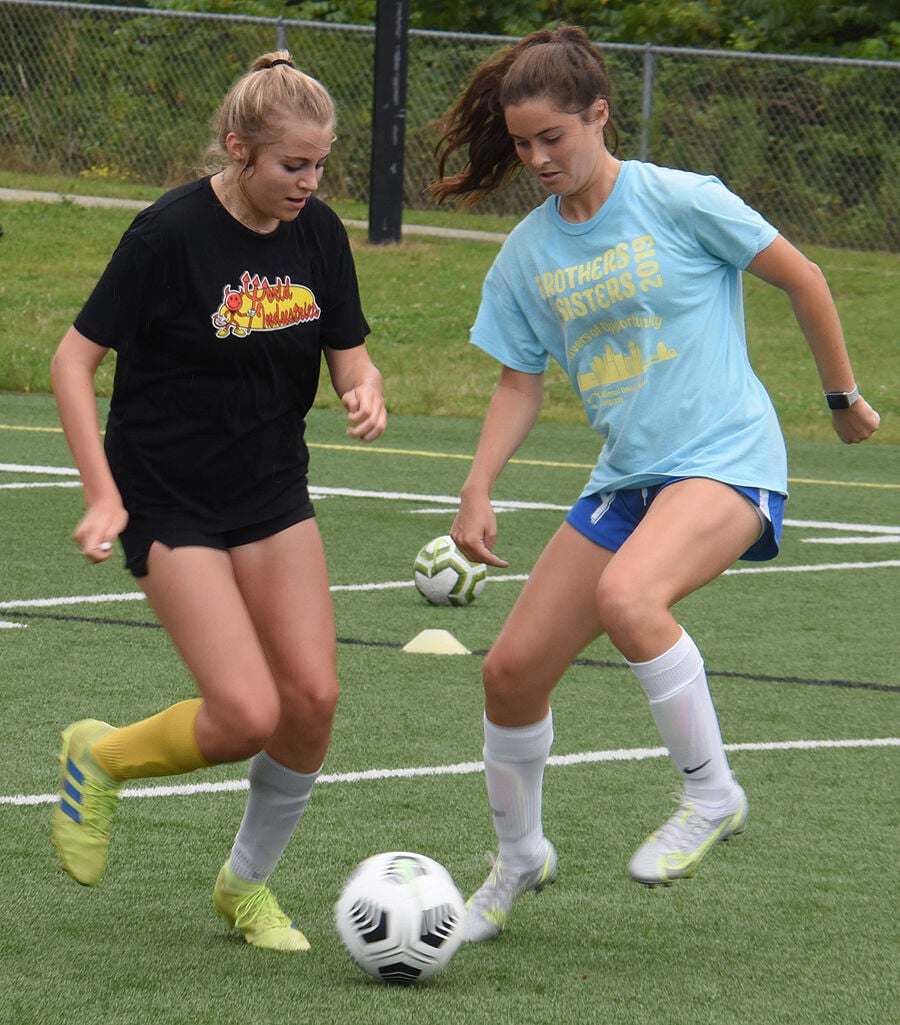 Kate Reichard and Macy Mathias battle for the ball during a one-on-one drill during Bethel Park girls soccer training camp. 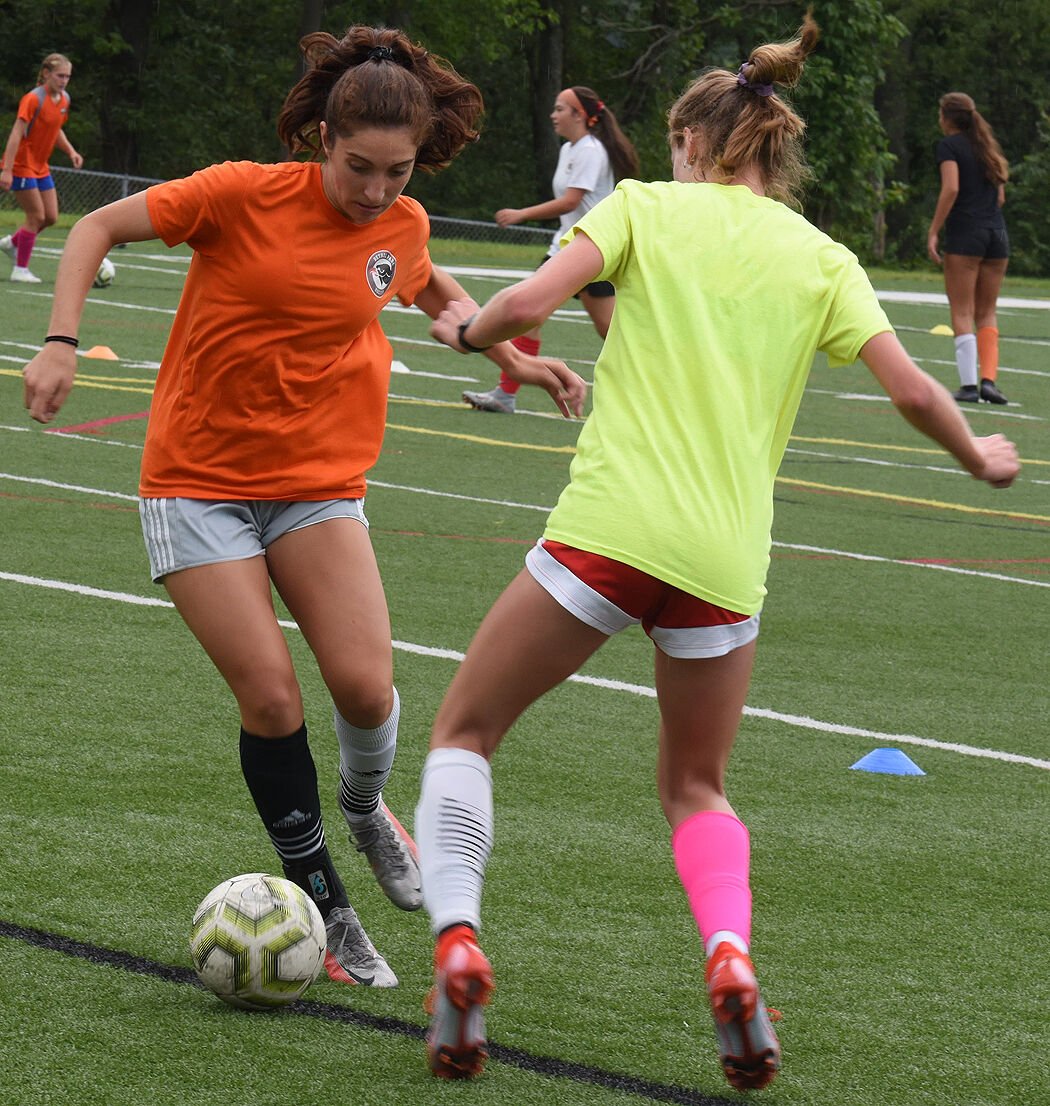 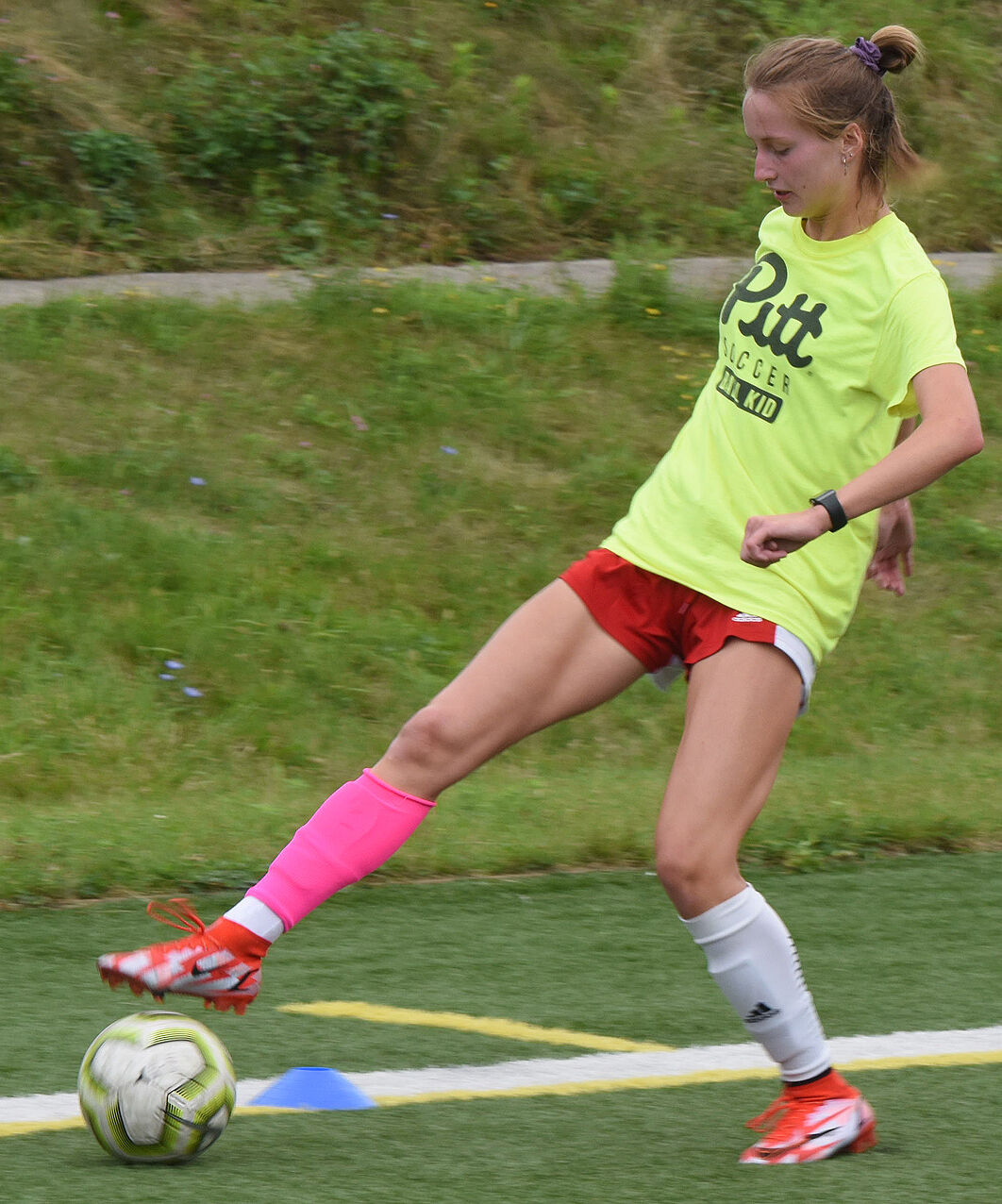 Eva Blatz is one of eight returning starters hoping to lead Bethel Park to its second straight playoff appearance this fall.

Kate Reichard and Macy Mathias battle for the ball during a one-on-one drill during Bethel Park girls soccer training camp.

Eva Blatz is one of eight returning starters hoping to lead Bethel Park to its second straight playoff appearance this fall.

Experience will factor into Bethel Park’s success in girls soccer this fall.

Marena Chernicky and Julie Heh return to anchor the defense. Chernicky started last year at center back. Heh started at outside back.

“Both should be leaders in the back for us,” First-year head coach Rob Heuler said, “but we are still looking for who else will be a good fit.”

The Hawks need to fill the gap caused by the graduation of Rachel Toth.

Heuler anticipates Kristen Horgan and Lauren Heh, who started last year as an outside midfielder, will flourish alongside Chernicky and Heh on defense.

“We look for speed and physicality in the back and we have people who can follow in the footsteps of those who have gone before them. We have been blessed with talent at the position in the past and these girls will help us fill out our defense,” Heuler said.

The midfield, however, appears to be the team’s strongest asset.

“Midfield is our team strength,” Heuler said. “We have girls who have been playing there for three years. The team chemistry is good and we are confident that our midfielders will run the game and pace our style of play.”

“She’s fast and can run balls down,” Heuler said. “We definitely look for her to score but it’s a tough call and too early to tell who else will stack up.”

Because BP boasts plenty of depth, there are many solutions.

Bethel Park must still contend, however, with the graduation of goalkeeper Abby Karstensen.

“(Goalkeeping) is a key position,” Heuler said. “If you have a good one, then you have a solid team.”

Freshman Freya Blatz and sophomore Alex Francus are in contention for the starting spot in goal.

“Right now they both will see their share of time,” Heuler said. “Until one of them proves themselves and steps up, we’ll go with who’s hot.”

BP opens Section 2 action at Moon Sept. 8 and will square off against Peters Township Sept. 15.

While the Black Hawks have beaten many of their section rivals, including Mt. Lebanon, Canon-McMillan, Baldwin and Upper St. Clair, they have yet to beat the Indians in league play during Heuler’s tenure.

“They are talented, athletic girls,” he said of the Indians. “They are a good match up for us.”

Nevertheless, the Black Hawks have set their sights on making a run for the section title.

“That’s a big goal for us in such a competitive league,” Heuler said. “The main goals are to make the playoffs and get a higher seed and make a deeper run in the playoffs.

Since his arrival at Peters Township in 2007, Pat Vereb has guided the Indians to seven WPIAL and four PIAA finals. He has won three state championships and owns two WPIAL crowns.

So as he enters his 25th season of scholastic coaching overall, his goals for the Indians remain constant.

“We want to compete for the section championship and make a playoff run,” said Vereb.

In 2020, the Indians did win the Section 2 banner with a 10-1-1 record. The Indians reached the WPIAL semifinals. They succumbed to North Allegheny, 3-0, which went on to win the district title and finish runner-up in the PIAA.

The missing link is Emma Sawich. She racked up 11 shutouts.

A three-time All-WPIAL and four-time All-Section performer, Sawich has graduated. She is now a goalie at St. Francis University.