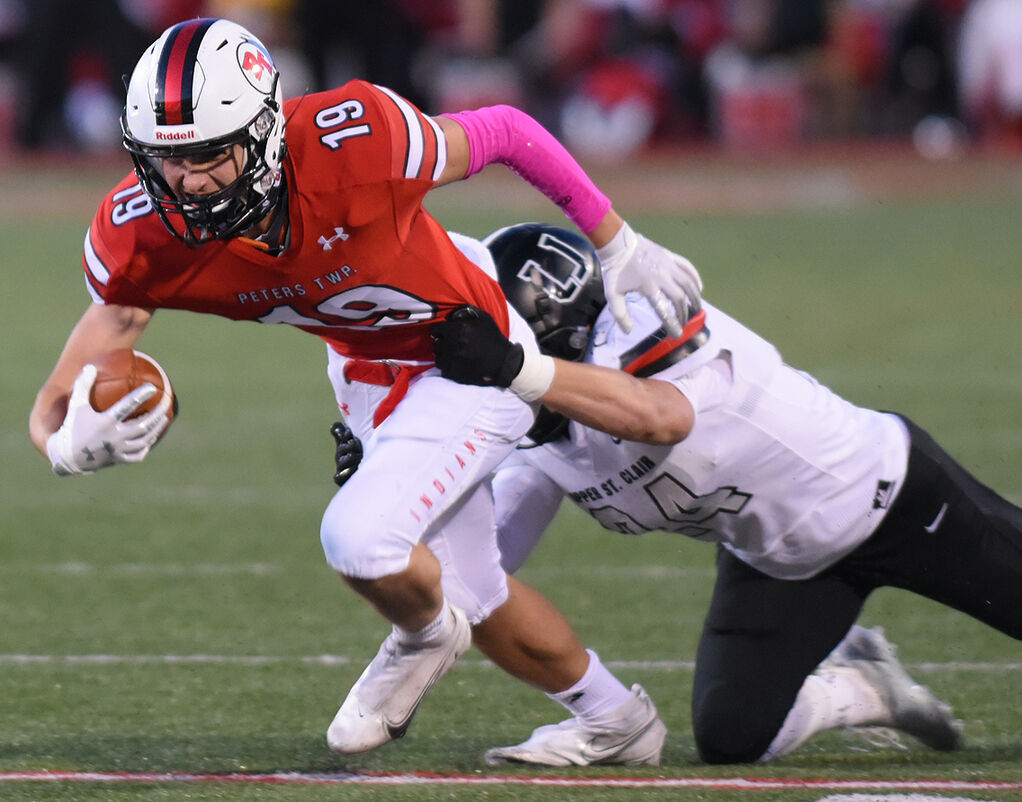 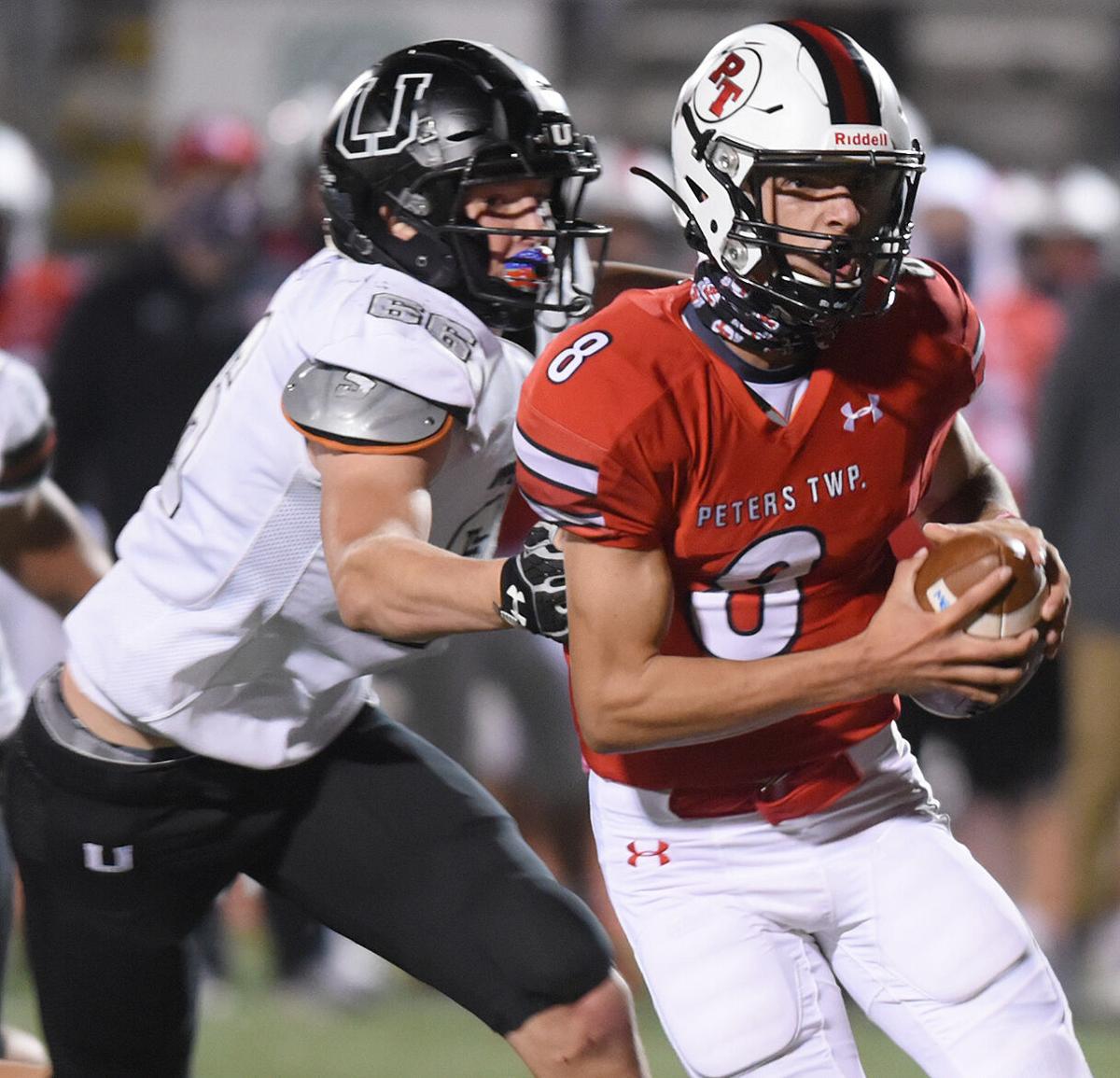 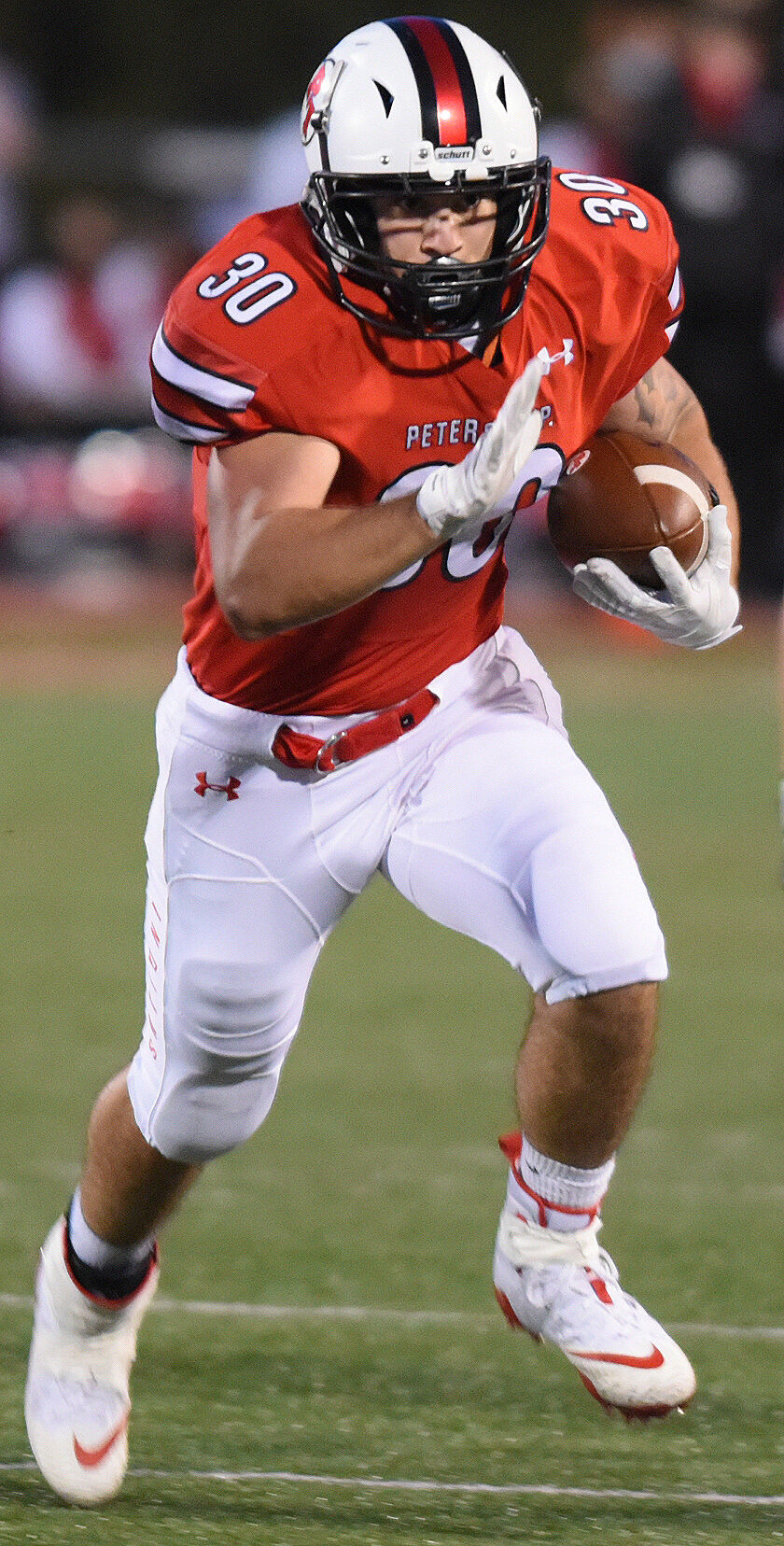 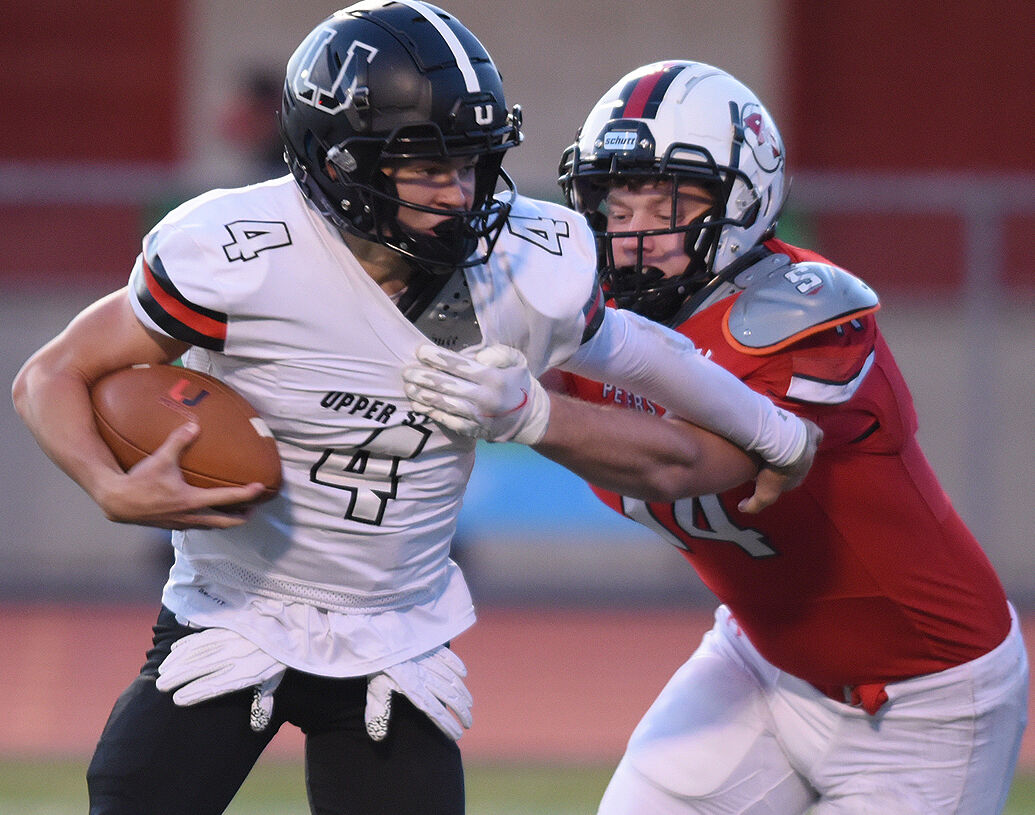 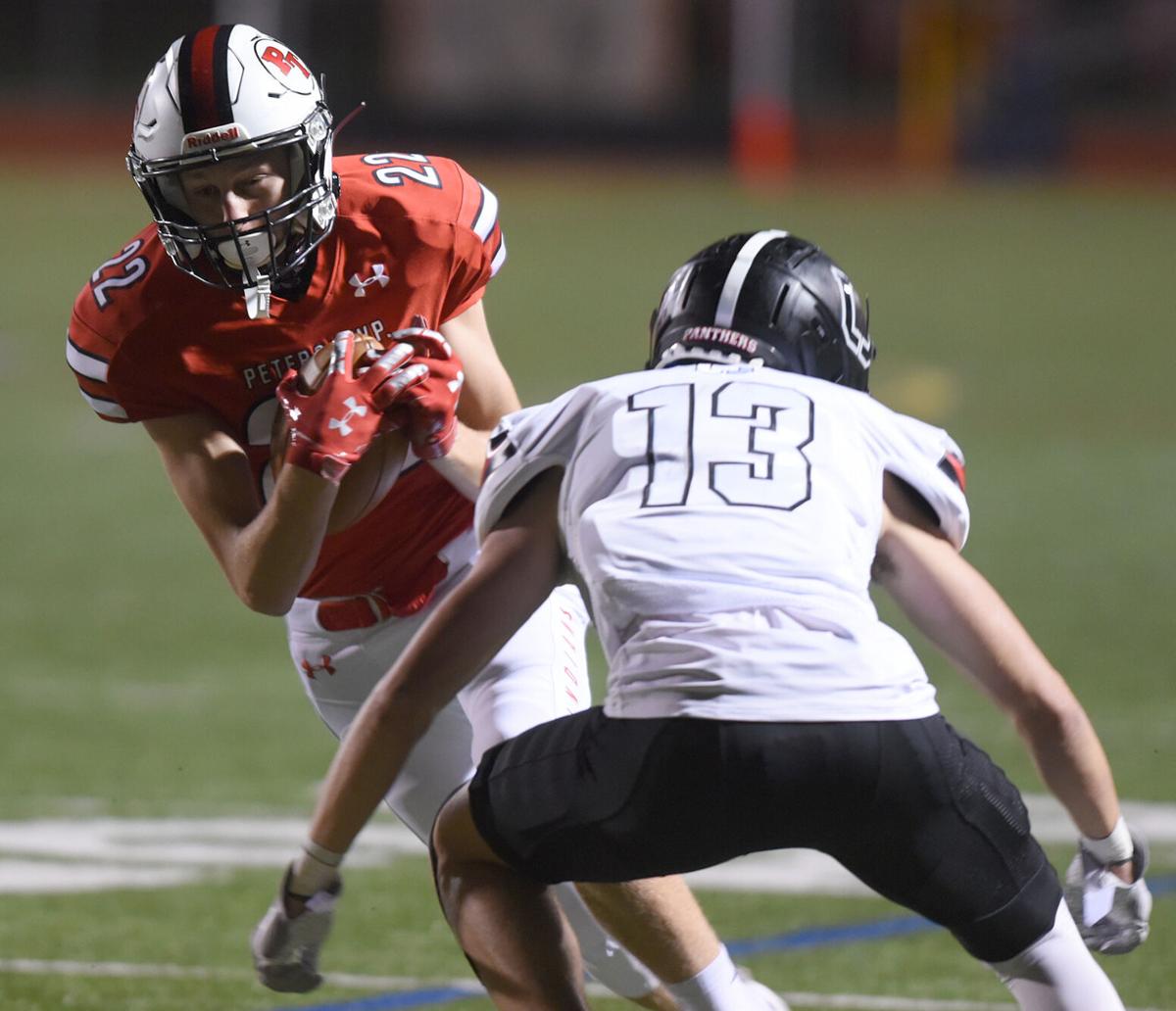 Serving as Peters Township’s punter affords Corban Hondru the opportunity to be a defensive and offensive weapon for the Indians.

For the second week in a row, Hondru faked a punt on a fourth-down play and converted a critical first down that helped enable Peters Township to seal a 28-22 victory over Upper St. Clair in an Allegheny Six Conference game.

Hondru helped keep a crucial drive alive during the Indians’ 17-3 victory over South Fayette a week earlier with a run for a first down on a fake punt.

“Last week, we ran it twice to the right side. So I knew they would think we would go to the right. I told coach, ‘let me go left’ and he said, ‘if it’s there, take it.’ I saw the opening and I just took off,” Hondru said.

The fourth-and-two play at the PT 30-yard line and with 2:43 to play kept USC’s hurry-up offense off the field and enabled the Indians to run out the clock and remain undefeated at 3-0.

“They are a good offensive team. They are very explosive,” said Hondru. “So I saw where the first-down marker was and I knew I had to get there and beyond. That was my goal.”

A four-year starter for the Indians, Hondru is a do-it-all performer. He is the leading tackler on defense. The 6-1, 230-pound linebacker collected 69 tacklers – 16 for a loss – and had 10 sacks last season. He also averaged 35 yards per punt. On offense, he has played wide receiver, tight end, tailback and quarterback.

“He’s that talented,” said PT coach T.J. Plack. “He sets the tone on defense. He makes all of our calls. I cannot say enough about him. Everything he does is great.

“He’s just a kid that you tell him one time and he understands everything about it, when to do something, when to pull the trigger and when not to,” Place added. “He’s a special young man. Probably one of the best that I have ever been around.”

Hondru’s grandfather, Bryan, played at Penn State. His father, Scott, and uncle, Mark, played at the University of Delaware. They also excelled at USC, making the Oct. 1 game a family affair of sorts.

“Just knowing the whole family history and knowing it’s a rivalry since we were little kids makes this outcome feel really good,” Hondru said. “It was just good to come out and get a W against them.”

Defense and special teams helped the Indians secure the victory.

USC used three plays to reach the end zone to start the game. Panthers quarterback Ethan Dahlem had a 52-yard run to set up his five-yard touchdown at the 10:54 mark of the first quarter.

“After the first drive and they got a big run on us, we knew that we needed to lock down,” said Hondru.

Hondru’s punt, however, put USC on its own one-yard line and the PT defense picked up two points on a sack.

“Defense is much more fun than anything else because I’d rather give the hits than take them,” Hondru said. “We pride ourselves on defense. Being one of the more physical teams from the point of attack. That’s what we want to do every single game. Thankfully, we executed.”

Though Dahlem put USC ahead 14-12 on his four-yard scamper into the end zone with 3:04 left in the half, the Indians went ahead for good before the intermission on Massucci’s 34-yard field goal. The possession was set up by a muffed punt and recovery by Indians standout Donovan McMillan.

“I knew our defense would be stout and our special teams would make a difference because we have a good group of guys there who do the little things in these tight games,” Plack said. “I was real happy though that we got our offense going and we were able to run the ball.”

Peters Township’s Michael Peyton rushed for 112 yards and caught a pass for 14 yards. He scored on a one-yard plunge with 4:19 left in the third quarter.

Indians quarterback Logan Pfeuffer tacked on a 15-yard touchdown run with 10:48 to play. He completed 15 of 21 passes for 163 yards.

Dahlem completed a 43-yard scoring strike to Aiden Bessleman with 6:12 to play. David Pantelis had four receptions for the Panthers.