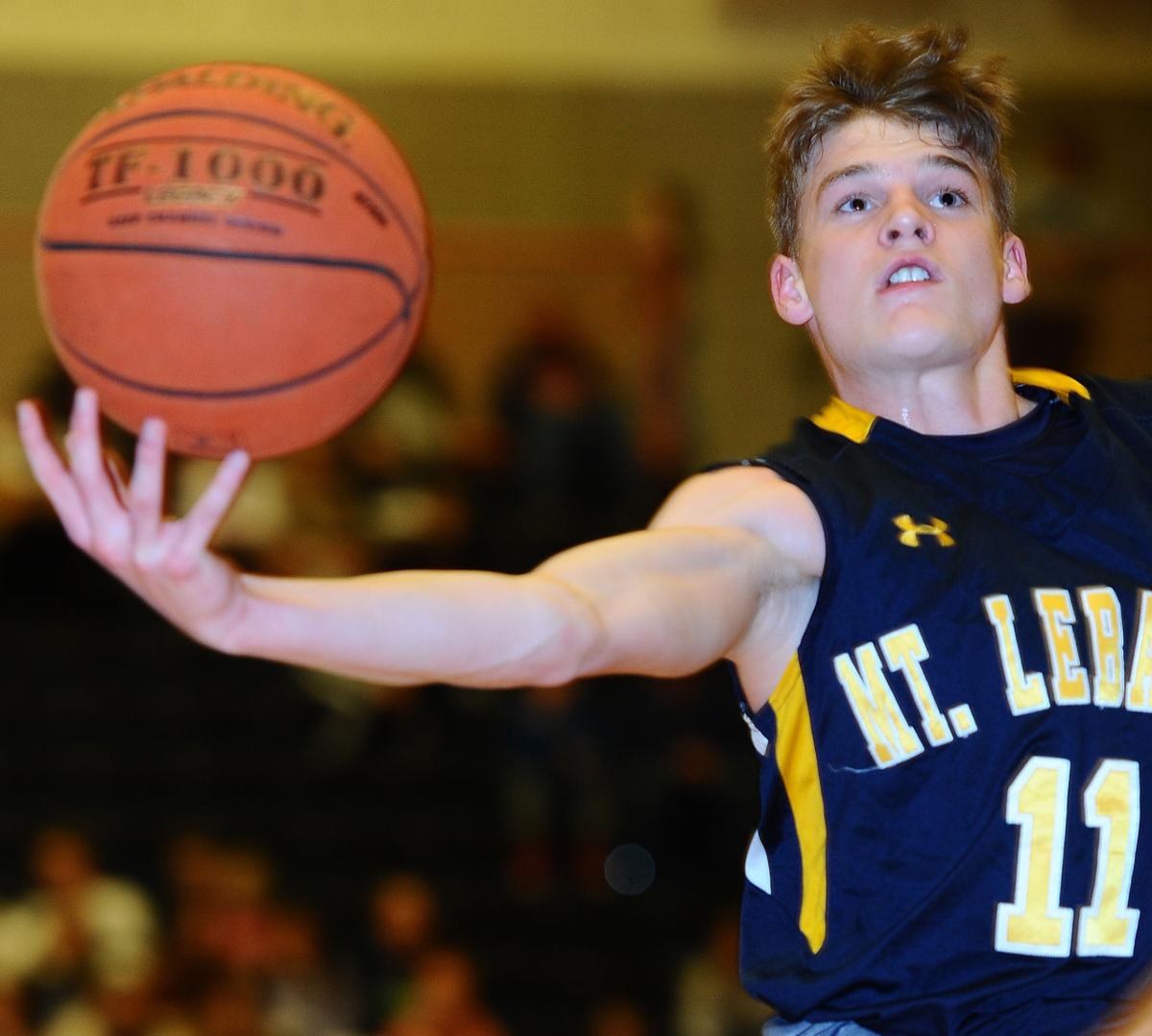 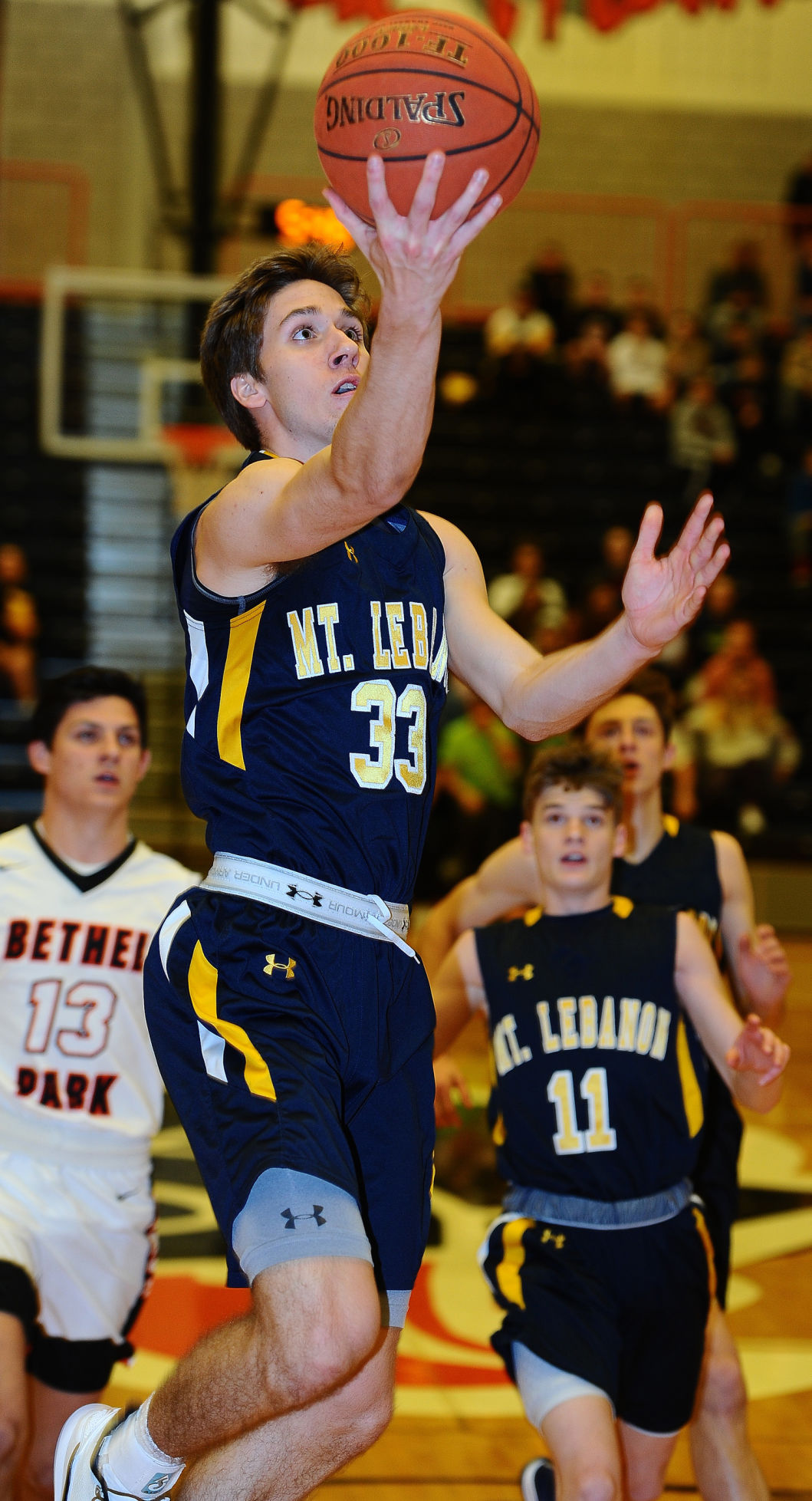 Jake Hoffman leaves the competition in his wake as he soars to the basket for two during Mt. Lebanon's 61-59 victory against Bethel Park. Hoffman fired in 21 points. 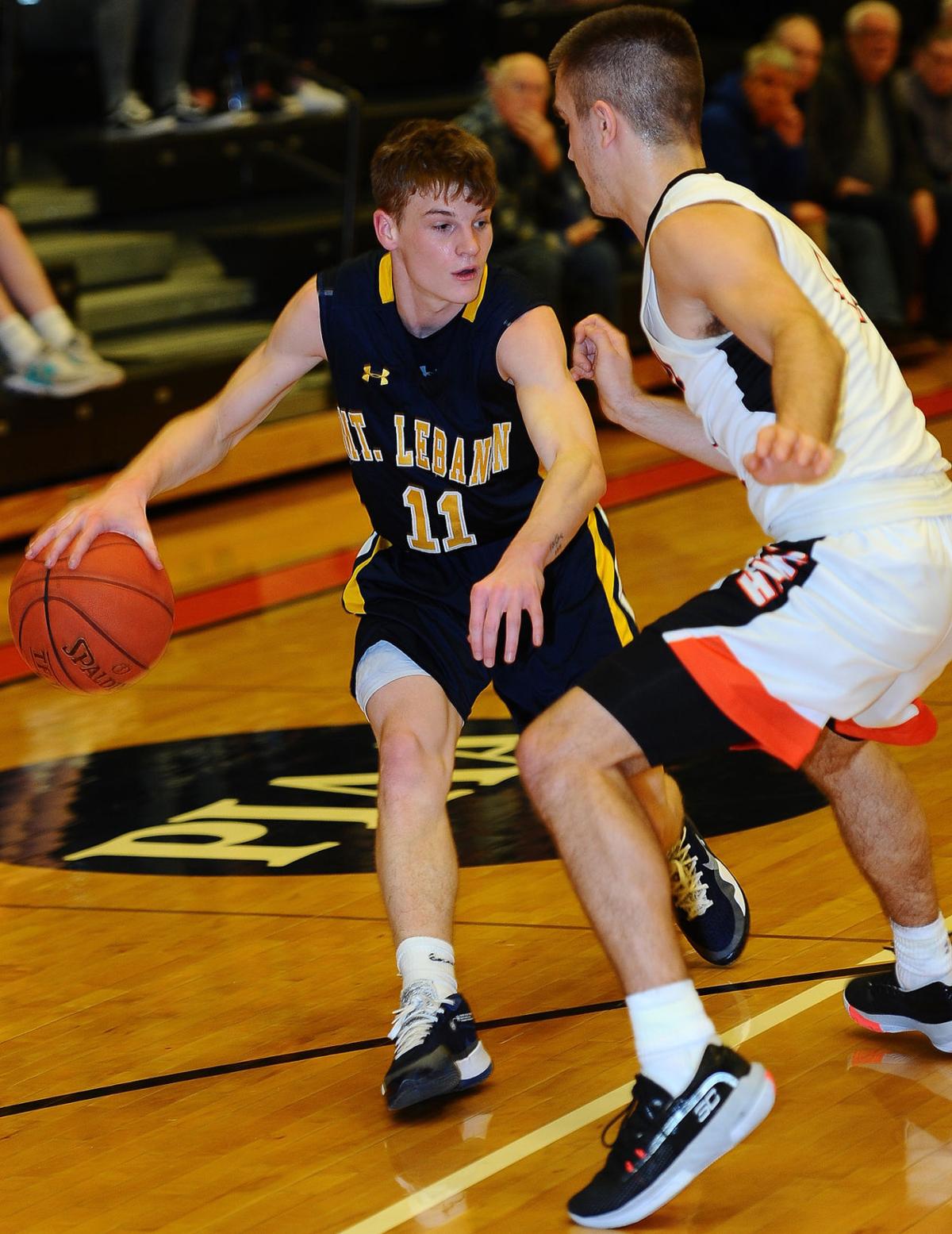 Jake Hoffman leaves the competition in his wake as he soars to the basket for two during Mt. Lebanon's 61-59 victory against Bethel Park. Hoffman fired in 21 points.

For Blaine Gartley, beating Bethel Park was like blowing out candles on a birthday cake.

Celebrating his 18th year on Jan. 7, the Mt. Lebanon senior took one deep breath and extinguished the Hawks, 61-59, by sinking two free throws in the final 1.4 seconds of the game.

Because the Blue Devils do mental exercises every day in addition to their typical practices, Gartley said he wasn’t nervous stepping up to the line.

“I just breathed calmly through the chaos,” he said. “Because we practice these every day, I knew they were going to go in. I was confident to go to the line.”

Three minutes earlier, even at the start of the contest, Lebo was a tad less confident. In fact, Blue Devil skipper Joe David was anxious.

Despite their 7-5 overall record, David knew the Hawks were dangerous. They featured sharpshooters like Tommy DiRienzo, Anthony Chiccitt and Ryan Meis.

DiRienzo, who earlier this season exploded for a school-record 51 points, fired in 29 points while Chiccitt and Meis each chipped in 13 tallies. The trio’s 3-point accuracy vaulted the Blue Devils into the eight-point advantage with 3:30 to play.

“They are a very good team, well-coached,” David said. “They have really good players and really good shooters. That’s always a concern.

“But,” David interjected, “I also know that we are capable of scoring points in bunches.”

So during a timeout, David reminded his players “we are still in it” and “plenty of time” remained. “We just had to execute,” he said.

“I knew that the game wasn’t completely over,” he said. “We just had to make a couple of plays.”

With plenty of fouls to give before putting BP in the bonus, the Blue Devils amped up the defense, created turnovers and picked off passes, and viola, they were back in the game when Joey King got a steal. The sophomore, who contributed 12 points and six rebounds, was fouled and tied the game at 59 with 34.3 to play. Jake Hoffman, who finished with a team-high 21 tallies, tipped a rebound of the missed second shot and the Blue Devils maintained possession, setting up Gartley’s heroics.

“My teammates came up big,” acknowledged Gartley, who dished up eight assists and added four steals to his 16-point production.

“Our defense was fabulous at the end,” he said. “We went to that zone a bit to try and cool them down. They couldn’t miss their shots.

“But, I was real proud of my guys,” David continued. “We stayed in it. We had the luxury of having some fouls to give in the end. I called that timeout to make sure they knew that we wanted to be very, very aggressive and they did a really good job and got some steals and put some pressure on.

“Joey made a great play. Jake’s tip out was fantastic. So all those little things added up for a great team win on the road. Any time you win a section game on the road, it’s a good win.”

So far this season, the Blue Devils have picked up several good wins on the road.

After winning at North Allegheny, 75-39, and dropping a rematch of the WPIAL championship game that Lebo won in 2019, the Blue Devils lost at Butler, 75-71. Lebo picked up two big wins at the Junior Orange Bowl in Miami. The Blue Devils defeated the host club, Palmetto, 67-60, and Schoolhouse Prep, 64-55, but they lost to Mt. St. Joseph one of the top clubs in Maryland, 50-48.

“The competition was fantastic and we were able to compete against those teams and academies that can recruit. Mt. St. Joseph has a bunch of future college players and they could very well contend for our PIAA title,” David noted. “It was a very positive experience.”

Off the court, the Blue Devils enjoyed even more positive adventures. The players had the opportunity to meet Bam Adebayo. The Miami Heat center, who is averaging 15.6 points, 10.6 rebounds and 4.6 assists per game, played at the University of Kentucky, where David’s son, Jonny, was a member.

The Blue Devils also were able to attend a workout conducted by former Pittsburgh Steeler Antonio Brown. They also visited the WOW Center in Miami. The adult day training facility supports and serves over 200 adults, ranging in ages from 21 to 80, with developmental disabilities. The Blue Devils engaged in games and drills with the residents.

“We had done that before and the players wanted to do it again. It was a nice morning and great to spend time with them. All in all, the trip was a great bonding experience. When you do things together as a team it has a positive impact. Trips together and all the things associated with them helps make teams more cohesive.”

Lebo, indeed, is coming together.

Hoffman made the all-tournament team in Miami. He started the season scoring 30 points in each of Lebo’s first three victories. The Blue Devils were 9-3 overall and 3-0 in Section 2, 6A heading into their Jan. 10th contest against at Peters Township

“Jake keeps getting better. He’s getting challenged now because all teams are trying to stop him but he continues to play at a different level,” David said. “He’s not the type to worry about scoring. He can help out rebounding and with steals and he’s smart enough to know that there are others on the team that can help him out.”

Gartley has certainly been helping Lebo out, especially from the point position. Jake Reinke and King are also key components to the team’s success. While Reinke fired in 13 points in Lebo’s 61-51 win against Canon-McMillan, King pulled down 21 rebounds and pumped in 12 tallies.

“We are getting there,” David said. “It’s still a process. We are still finding the right pieces to the puzzle.”