Skip to main content
You are the owner of this article.
Edit Article Add New Article
You have permission to edit this article.
Edit
Welcome, Guest
News
Sports
Life & Culture
Events Calendar
Lottery Results
Fish Fry Map
Weather
Sponsored Content
Classifieds
e-Edition
South Hills Living
Get Our Newsletter
Get the Almanac
Advertise With Us
Submit Content to The Almanac
Contact Us
About Us
1 of 7 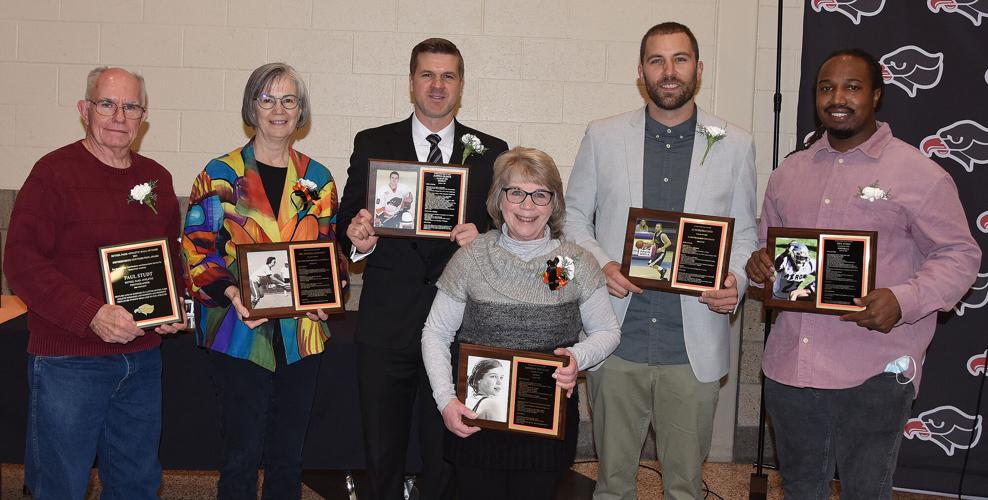 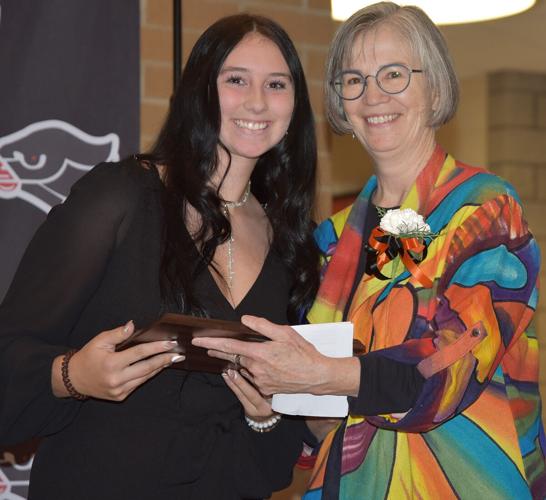 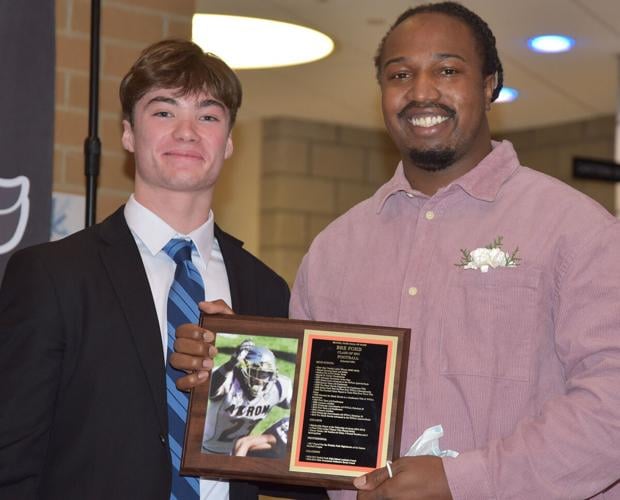 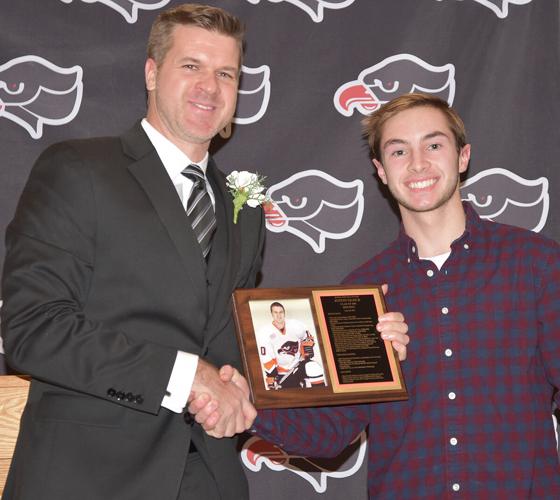 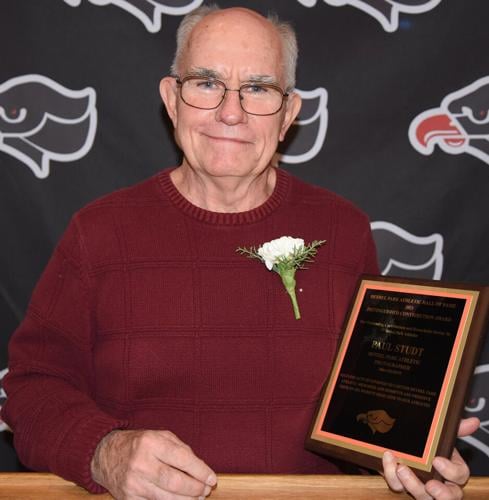 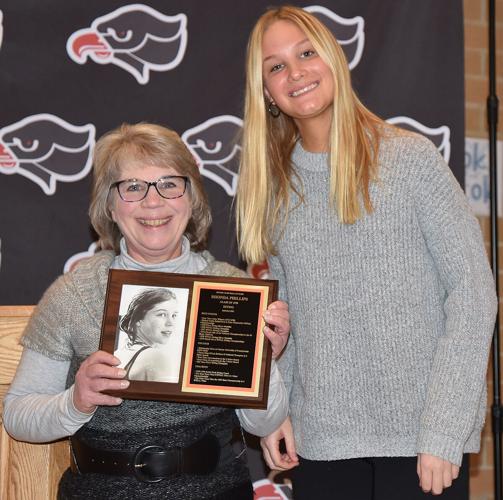 Rhonda Phillips poses with her induction plaque with her presenter, Ellen Devine. 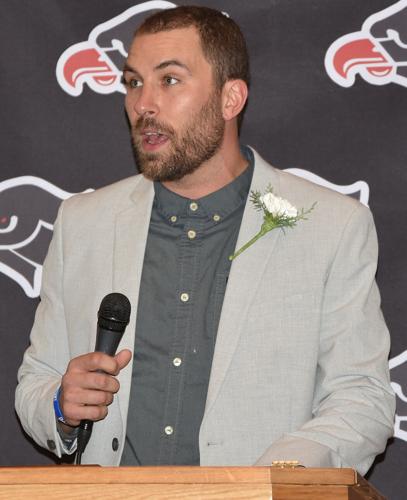 Rhonda Phillips poses with her induction plaque with her presenter, Ellen Devine.

Whether they played three sports or one, the six new members of Bethel Park’s athletic Hall of Fame agreed on one thing during their induction ceremony.

The class of 2021 was humbled and honored to be chosen for enshrinement.

“I’m grateful to accept this award,” said JJ Schumacher, a 2002 graduate, who excelled in basketball, soccer and track. “To add my name to the wall with so many other great athletes is a cool, yet humbling honor.”

Bre Ford agreed. With a shaky voice and tears in his eyes, he delivered an emotional acceptance speech.

“I’m not one for attention that’s why I liked the helmet. I could hide behind it,” Ford said of his football playing days. “This is quite an honor. I am thankful to the committee, my coaches, my teammates and my family for their love and support from Pop Warner all the way through to my days in the pros.”

After earning four letters playing safety at Akron and recording 105 tackles, Ford played indoor football for the Wichita Fall Nighthawks in 2017. In high school, he also doubled as a running back, rushing for 3,518 yards and 51 career touchdowns. A 2011 graduate, he played on the Black Hawks’ first WPIAL championship team. In 2008, BP also played in its first state championship game, falling in overtime to Liberty, 28-21. Ford was a two-time all-star of The Almanac and Fab 22 selection as well as an All-Conference performer.

Justin Glock said he also appreciated the distinction and acknowledged all those who impacted his hockey career.

A 2002 graduate, Glock guided the Black Hawks to three consecutive Penguins Cup and state championships. In fact, he scored the game-winning goal in overtime to clinch the 2002 state crown. A two-time MVP of The Almanac and PIHL all-star, he also played for Team Pittsburgh in two Chicago Hockey Showcases.

After playing for the Cleveland Lumberjacks, Glock competed collegiately at Ohio and Pitt universities. He helped the Bobcats win the ACHA national championship in 2004.

Glock now coaches Baldwin. In 2021, he guided the Highlanders to the 2021 Penguins Cup and PIHL state championships.

“I was surprised and humbled,” Glock said of his nomination. “There’s a long list of people to thank for this honor and I don’t think you really realize how lucky you truly are until you start coaching kids or having kids of your own because you take so much for granted when you are growing up.

“You can’t do this alone. There’s your parents and I can’t thank them enough for the money, time and travel it took for them to get me lessons and to practices and games.”

Glock also noted his brothers, Jason and Jonathan. They attended every game and remember every highlight. Glock also recognized his fifth-grade teacher Ray Mash and his fiancee, Ashley, for their support and advice.

“Mr. Mash has been a therapist of sorts. I hope he doesn’t start charging me,” Glock said with a laugh. “And Ashley, she goes along with all my crazy superstitions and long nights of watching all those videos in preparation for games.”

Glock had a large contingent of supporters at his induction ceremony, including his current players who showed up to surprise him. Glock draws comparisons from his past teams to today.

“Our class was so talented and so consistent but the reason why we had success was because we held each other accountable,” he said. “Everyone picked each other up. If one player went down, we never missed a beat. We all had a part to play and we never left anybody behind. Some of my best memories of my life were playing here, especially scoring the overtime goal my senior season to end it all.”

Scholastic sports proved a means to an end for Dr. Patricia Downey. A 1976 graduate, she competed in volleyball, basketball and softball and earned three varsity letters and captainships in each endeavor.

Downey played softball at West Virginia University, where she earned a degree in physical therapy.

“At the time that program only accepted 18 students per year. The odds were against me but I was 17 and I was confident. That confidence came from being a student athlete,” said Downey.

“There is significant research out there that shows the majority of women who have successful careers and in particular who become CEOs or own their own businesses in Fortune 500 companies. They credit it to being student athletes when younger,” she added. “I feel like I can draw a line from my experience at BP to my success in life and career.”

Upon college graduation, Downey worked in the burn unit at UPMC Mercy hospital. She earned her masters degree from the University of Pittsburgh. While working at UPMC Sports Institute, she became the first physical therapist for the Pittsburgh ballet. She taught at Slippery Rock, Pitt and Chatham

Downey earned her Ph.D. in physical anthropology and became the inaugural dean of the School of Health Sciences at Chatham in 2014.

“When opportunities knocked on the door I didn’t think twice about accepting them because I had confidence from being on the court or the field,” she said. “That came from being a student-athlete. That foundation and support from high school is what made me successful. That and strong mentors and coaches, who were great motivators.”

Winning prompted Clarence “Mickey” Carlson. A 1953 graduate, he was BP’s triple threat on the football field as he played quarterback, halfback and kicker for four seasons. He led the Black Hawks to an undefeated season in 1951. In 1952, he scored 11 touchdowns and 73 points.

Carlson also was a four-year member of the varsity baseball team, compiling a career ERA of 1.33. As an outfielder, he also led BP to a pair of section titles and a 25-9 career record. Carlson also lettered two years in basketball.

He played football at the Bullis Military Preparatory School before competing at Michigan State University.

“First, I am humbled to be inducted,” wrote Carlson in a letter read by BP’s current quarterback Max Blanc during the ceremony. “Second, I was fortunate to be able to play for a dream ream. We all played to win for our school, Bethel Township and our dedicated fans and family, who attended every game, rain or shine. It took a lot of practice and discipline to become better and to transfer that effort into winning. Second place was not an option. To win was the goal of a true sportsman.”

Schumacher earned three letters and earned all-league honors in both basketball and soccer. On the court, he scored 914 career points and helped the Black Hawks reached the WPIAL quarterfinals in 2000. On the field, he tallied 36 career goals and led BP to 34 wins and a playoff appearance in 2000.

Schumacher also lettered in track and won the long jump during the 2002 WPIAL championships. He finished fourth in the state finals.

Schumacher went on to play basketball at the University of Pitt-Johnstown. He finished with more than 500 points and 300 rebounds and ranked seventh all-time in assists with 418.

Schumacher recalled assisting on a game-winning goal that led to a victory for Bethel Park against rival Mt. Lebanon his sophomore season, and traveling to Shippensburg to compete in the PIAA track championships the day after his senior prom. His coach had taken all the seats out of the family’s Chrysler minivan and put a mattress in there for him to sleep on the drive. Schumacher fouled his first two attempts but finished fourth on his final jump.

“Coaches saw something in me. They knew what could be done so we were always trying to accomplish those things through their vision,” Schumacher said.

“Sports is one of the greatest foundations a kid can have and they teach so much. Lessons you learn through sports translate in everyday life. Hard work, dedication, toughness and heart can carry you as a whole. Attitude and effort are the things we can control.”

Rhonda Phillips managed her destiny. Until age 10, she swam for the BP recreation program. Then the pint-sized 1978 graduate decided to dive.

Phillips won back-to-back WPIAL titles after finishing fourth as a freshman and second as a sophomore. Her scores contributed to four consecutive WPIAL swimming titles for the Hawks.

Phillips dove for Clarion University. She was a four-time All-American on both the 3- and 1-meter boards. Phillips was a three-time NCAA Division II national champion and a six-time PSAC winner.

From 1993-1990, she served as the BP diving coach, helping the boys swim team capture eight district and four state titles. The Hawks won four WPIAL banners and one state crown during that span.

“My parents put me in the water before I could walk but with my height I wasn’t getting anywhere down that lane,” Phillips said. “Because I liked gymnastics and jumping on the trampoline, my coaches recognized I had some kind of ability and suggested diving. So, I said sure I’d give it a try. It has done wonders for me and now I have such an honor.”

Paul Studt was named the Distinguished Contribution Award winner by the Bethel Park athletic Hall of Fame. The long-time Bethel Park resident and Penn Hills graduate was inducted along with six new members into the Hall's Class of 2021.

For 15 years, Studt has served as the official photographer of Bethel Park athletics.

“We wanted to recognize Paul for his selfless acts of kindness in capturing memories and moments and to preserve them on a website dedicated to our athletes,” said Tony Fisher, who is president of the BPHOF.

Since his sons, Eric and Brian, started playing recreation sports in the 19990s, Studt has photographed BP sports.

“Back in the dark ages. Before digital cameras,” he said with a chuckle.

Studt started out filming the marching band and football team. Studt expanded his coverage to include soccer, baseball, basketball, lacrosse and other school activities.

Studt specializes in capturing images of all players, from starters to reserves.

“My son was a lineman,” Studt said of Eric, who excelled at Bethel Park as well as the University of Dayton. “Usually there are not pictures of those guys so my goal was to photograph as many players as possible whatever positions they played. Not just the star quarterback,” he said.

Studt noted appreciation for the coaches and his wife, Janice, who have supported and encouraged him in his endeavors.

“Without them, there would be nothing to see,” he said. “It works right because of them.”