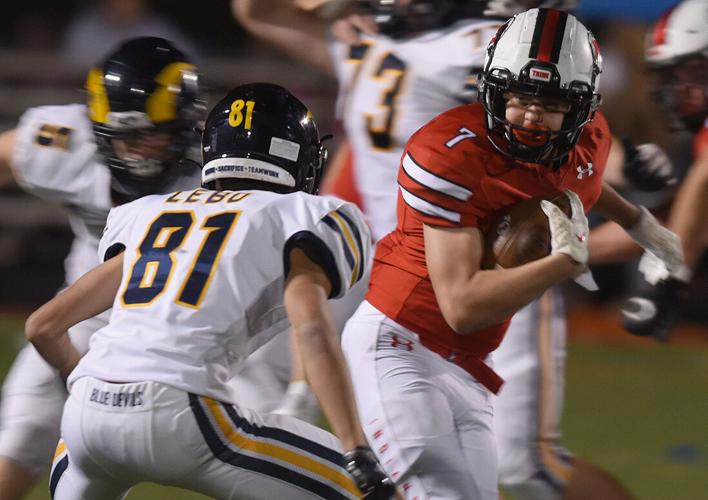 Peters Township running back Vinny Sarcone attempts to elude Mt. Lebanon defenders, including Noah Schaerli (81), but to no avail. The Indians lost this non-conference clash with the Blue Devils, 6-3. Sarcone will be a concern for Bethel Park when the Hawks host Peters Township at 7 p.m. Oct. 28 in a game that will determine the Allegheny Six Conference champion. 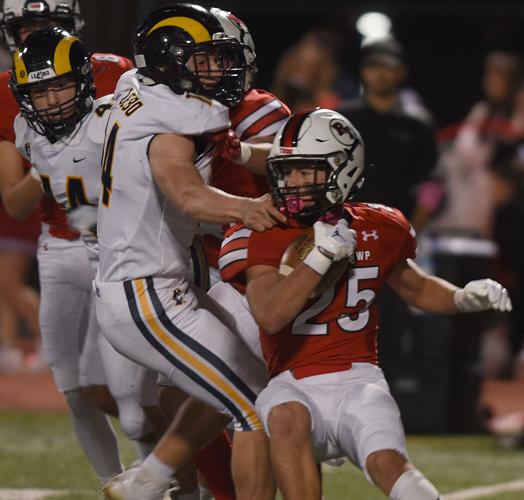 Brendan McCullough finds no room to run as he is swarmed by Mt. Lebanon defenders. McCullough is one of the receiving leaders in the WPIAL and will be a concern for Bethel Park when the Hawks host Peters Township at 7 p.m. Oct. 28 in a game that will determine the Allegheny Six Conference champion.

Peters Township running back Vinny Sarcone attempts to elude Mt. Lebanon defenders, including Noah Schaerli (81), but to no avail. The Indians lost this non-conference clash with the Blue Devils, 6-3. Sarcone will be a concern for Bethel Park when the Hawks host Peters Township at 7 p.m. Oct. 28 in a game that will determine the Allegheny Six Conference champion.

Brendan McCullough finds no room to run as he is swarmed by Mt. Lebanon defenders. McCullough is one of the receiving leaders in the WPIAL and will be a concern for Bethel Park when the Hawks host Peters Township at 7 p.m. Oct. 28 in a game that will determine the Allegheny Six Conference champion.

No family in Bethel Park is more pumped for this week’s football battle against Peters Township than the Plack clan.

“As a family we are excited about the game,” enthused T.J., the father. “We have a whiteboard on our refrigerator that my daughter (Marissa) updates daily. It includes the date, bus information, the last Peters Township score, the last Bethel Park score and upcoming opponents

“There’s nothing wrong with us,” he added with a hardy laugh.

There is, however, one thing very unusual. Daddy is the head coach of the opposing team when the Hawks host the Indians at 7 p.m. in a crucial Allegheny Six Conference clash on Friday.

“Outside of me coaching at BP for three years (2011-13). Great time, learned a lot. Living in Bethel and kids going to Bethel. There’s nothing interesting,” T.J. said dryly about the game.

For the Black Hawks and the Indians, the contest is for all the marbles and the conference championship. The outcome will also determine positions for the eight playoff spots available in Class 5A.

The top two teams in each of the three conferences automatically qualify and two more will be chosen. Wins and losses and Gardner Points will be tabulated to determine those wild-card entries for the playoffs, which are scheduled to start Nov. 4.

“The conference championship is on the line,” said Plack.

“Bethel has been waiting for this opportunity. They have great kids and are well coached. Very few thought we would be in this situation with five seniors on the roster,” Plack added.

“It’s a game that will be filled with perseverance and physicality. We have four quarters to compete, and I know both teams are looking forward to it.”

Bethel Park coach Brian DeLallo is particularly looking forward to challenging his friend again. Last year, his Hawks defeated the Indians, 38-8, which ended a losing streak where BP had lost the three previous encounters by a combined 110-14 score.

DeLallo befriended Plack when he joined the BP coaching staff in 2011. DeLallo was the offensive coordinator and Plack was hired as a special teams coordinator and running backs coach.

Even after those three seasons, the two remain friends in part because Plack’s son, Thomas, plays football as well as lacrosse in BP. The two coaches also live near each other and hang out together during the offseason.

“After summer workouts, I sometimes invite myself over to (Plack’s) place because he has a nice swimming pool and lives close to the high school,” DeLallo said.

DeLallo and Plack also have a “gentleman’s wager” on the game each year. The winner gets chicken wings and a cold beverage courtesy of the loser.

Fun aside, DeLallo says in order for the Hawks to beat the Indians, they must establish the run game, which is spearheaded by Austin Caye and stop PT’s passing attack led by quarterback Chris Cibrone.

“Offensively, everything starts with the rushing attack,” DeLallo said. “Defensively, we have to be solid against the run and not let their receivers get behind us. They have some dangerous receivers, and Cibrone has thrown the ball very well this year. We can’t allow them many big plays in the passing game.”

DeLallo also noted how Peters Township has played in two of the past three WPIAL championship games.

“They always have tough, smart kids and we have a ton of respect for their players and their coaching staff,” DeLallo said.

“They will be playing for at least a share of the conference championship, so their intensity level will be high. We have to be prepared to match that intensity level.”

DeLallo was pleased that his Hawks maintained their ferocity after toppling Upper St. Clair, 27-14, on Oct. 7. They followed up that triumph with a whopping win against Moon, 56-6.

In the win, Ryan Petras pulled in four scoring strikes of 39, 39, 43 and 14 yards from Tanner Pfeuffer. Petras totaled 144 yards while Pfeuffer completed 7 of 9 passes for 176 yards and an additional TD aerial to Dinari Clarsk (18 yards). Also in the contest, Gavin Moul and Nicholas Howrylak rushed for touchdowns. Randall Bergia returned a block punt 35 yards for another score. Tom Bova kicked the extra points.

“After an emotional victory in a rivalry game, it can be difficult to get back into the right frame of mind to play an opponent who is struggling,” DeLallo said. “Our seniors did a nice job of providing great leadership and making sure there was no letdown.”

The Indians dropped a 6-3 decision to Mt. Lebanon, managing only a 38-yard field goal by Joe Bedillion. They also lost a big part of its offensive punch because of an injury to Richie Woods, who had been one of the WPIAL rushing leaders with 652 yards on 99 carries in his first six games.

“We were sorry to learn about Richie’s injury. We saw it on film and it looked pretty bad,” DeLallo said. “He’s a tough kid, so I would expect to see him playing college football next fall, if not sooner.”

Plack said the Indians are hopeful Woods returns at some point this season.

“Losing an offensive playmaker is unfortunate, but a senior captain that the entire team loves is very difficult,” Plack said. “It does test the metal toughness of the team and it provides an opportunity for a couple young men to step up and make an impact.”

Vinny Sarcone has stepped into the running back slot but the Indians still lean on Cibrone, as well as Nolan DiLucia at times, and their corps of receivers including Brendan McCullough and Carter Shanafelt.

“Peters will have another tough, smart runner behind (Woods). They always do, so I am sure there won’t be much of a drop off,” DeLallo said. “Maybe they’ll place a little more emphasis on the passing game, particularly quick passes that are “an extension of the running game,” as they say.”