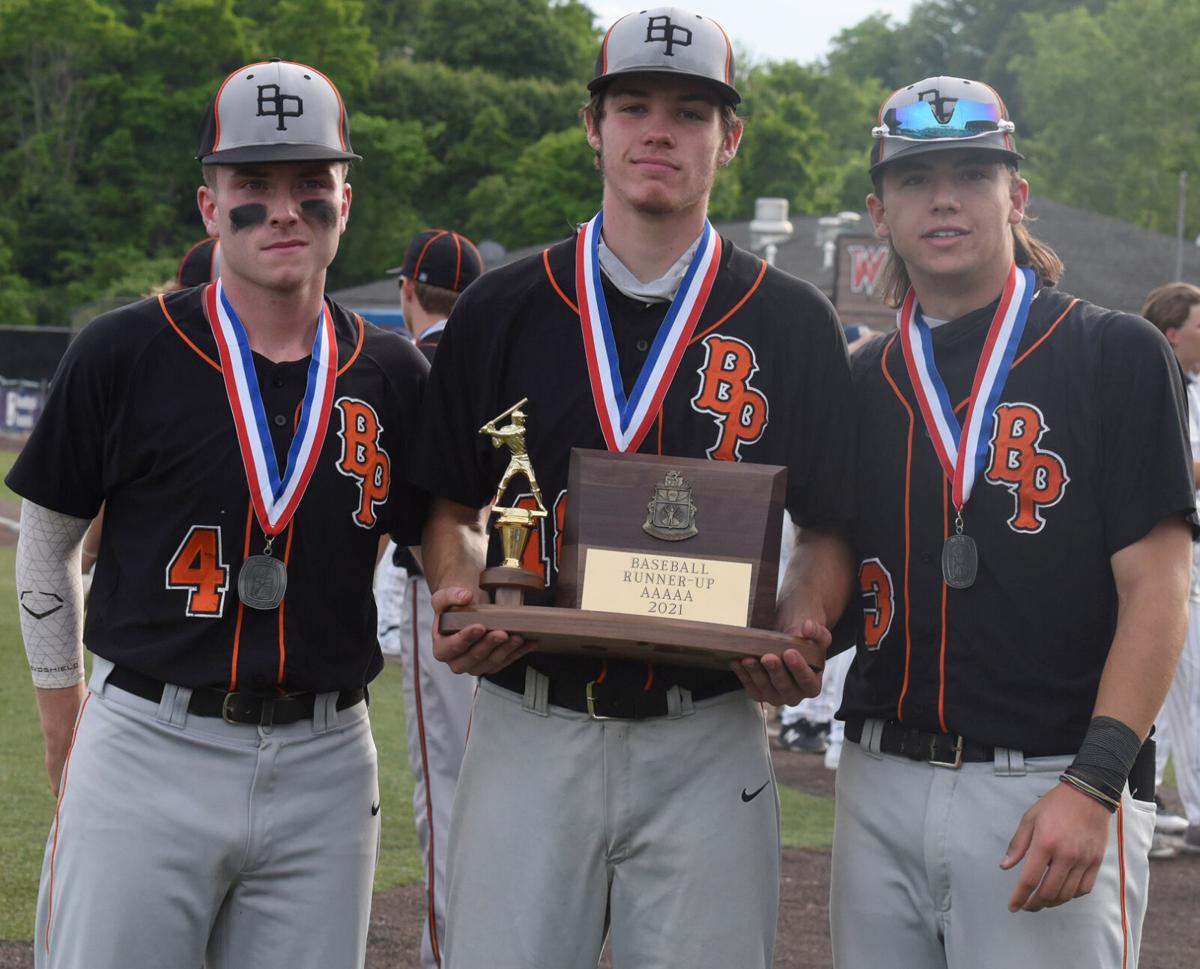 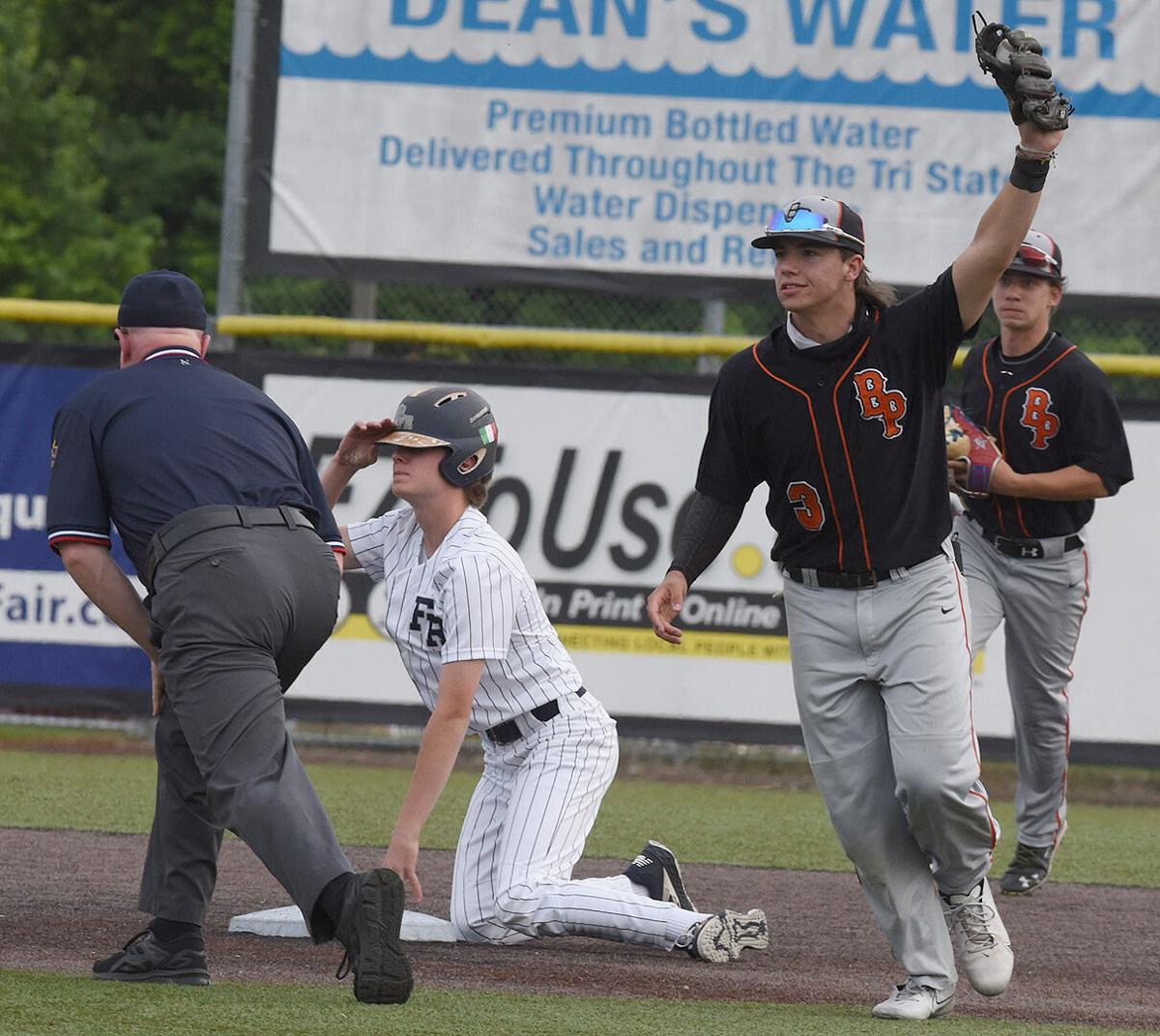 Bethel Park's David Kessler raises his mitt after tagging out Franklin Regional's Thomas Nicely to complete a double play in the sixth inning of the WPIAL Class 5A championship game. 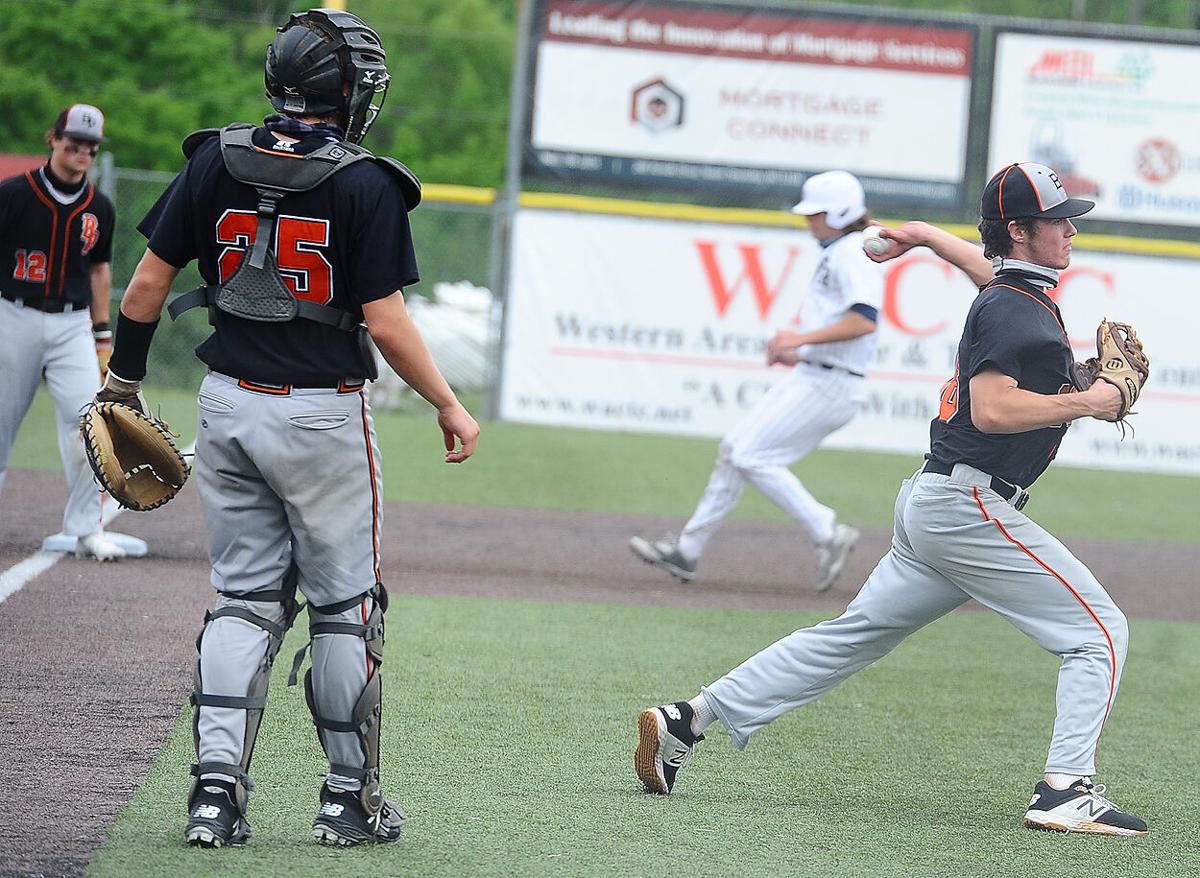 Bethel Park's Eric Chalus fields a bunt and attempts to get the putout at first base during the WPIAL Class 5A championship game. 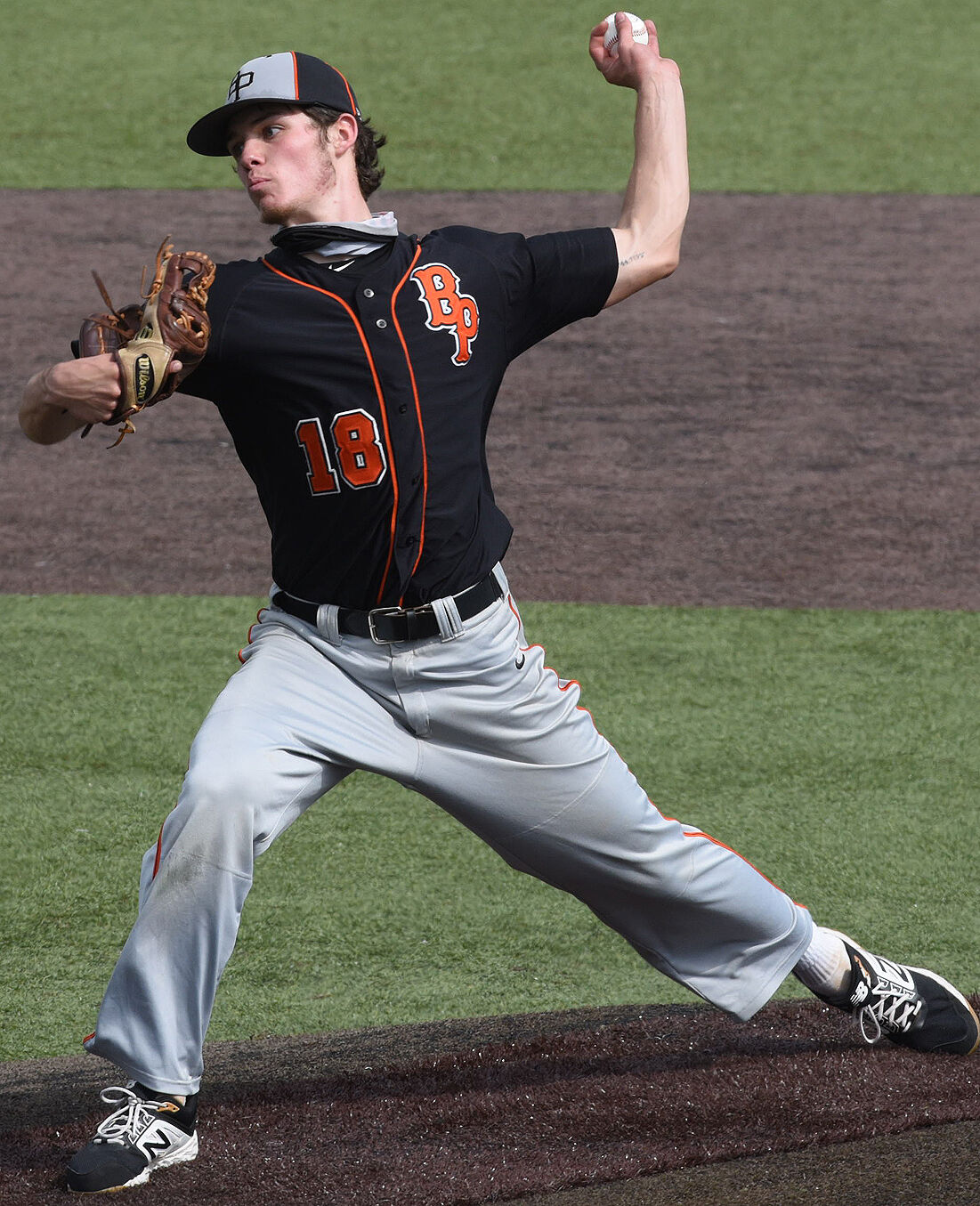 Eric Chalus delivers a pitch to the plate during the WPIAL Class 5A championship against Franklin Regional. 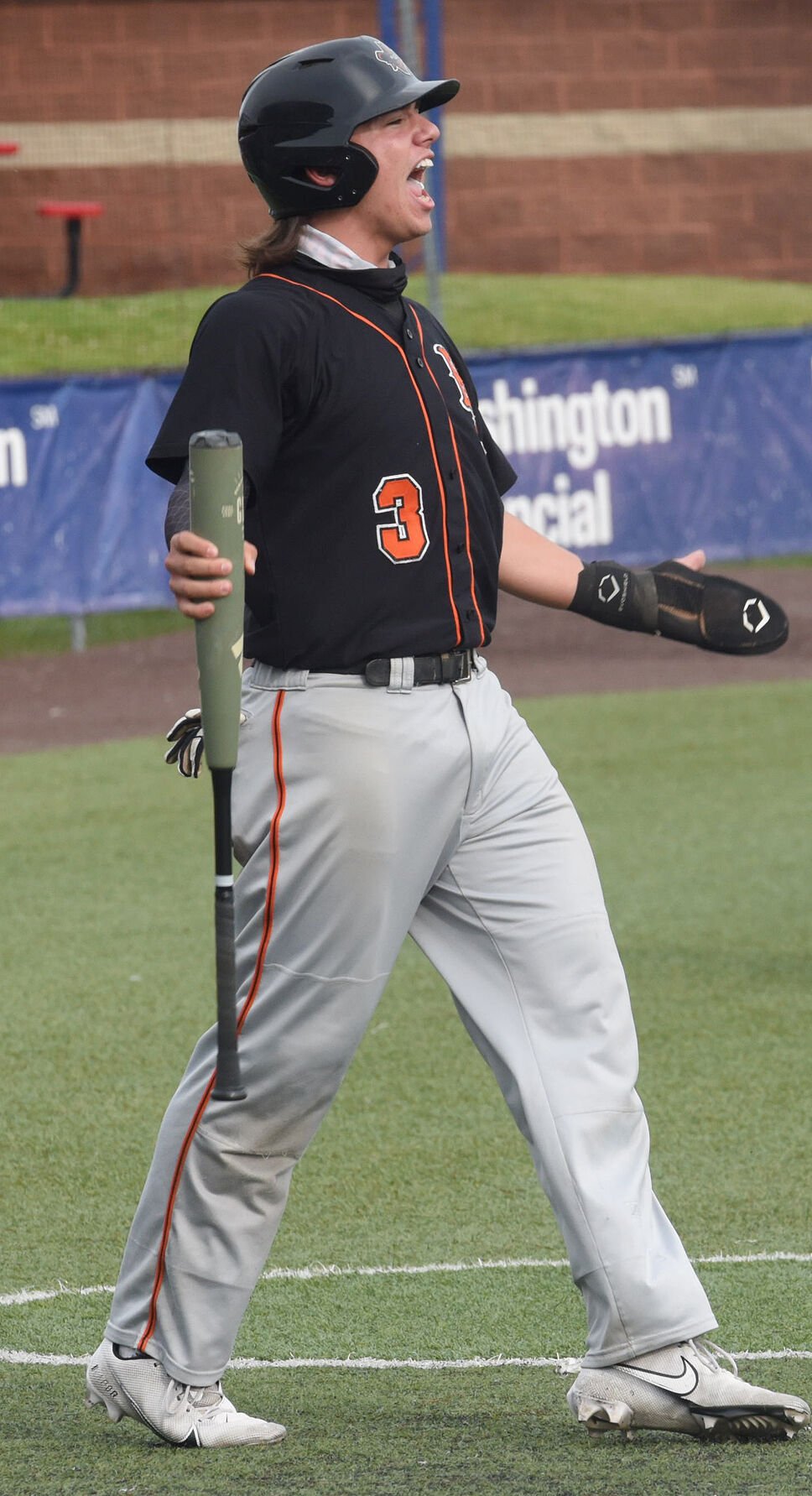 bethel Park's David Kessler reacts after scoring the tying run for Bethel Park in the top of the seventh inning. 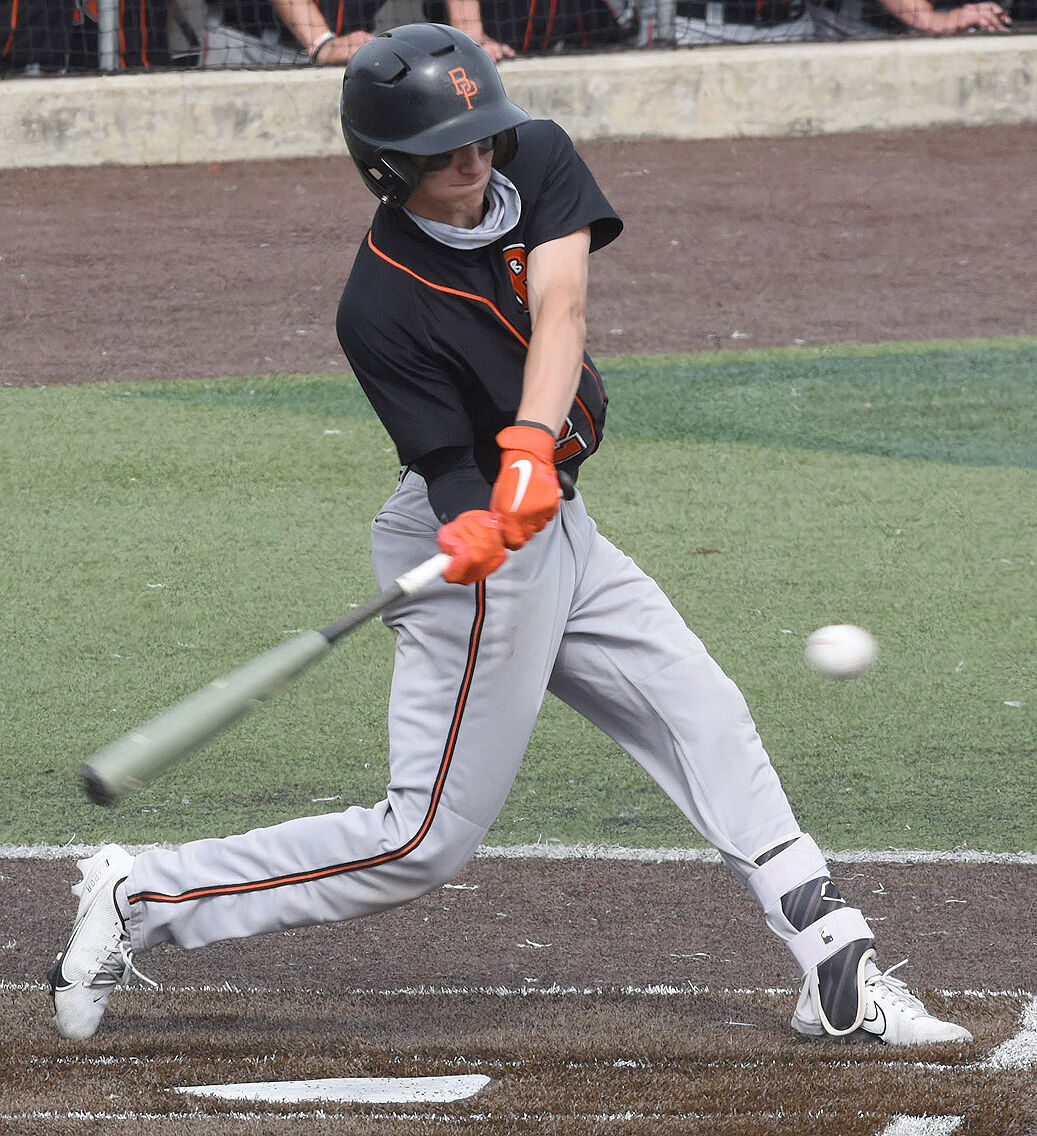 Bethel Park's David Kessler raises his mitt after tagging out Franklin Regional's Thomas Nicely to complete a double play in the sixth inning of the WPIAL Class 5A championship game.

Bethel Park's Eric Chalus fields a bunt and attempts to get the putout at first base during the WPIAL Class 5A championship game.

Eric Chalus delivers a pitch to the plate during the WPIAL Class 5A championship against Franklin Regional.

bethel Park's David Kessler reacts after scoring the tying run for Bethel Park in the top of the seventh inning.

For half an inning, it was beginning to look like another chapter might be written in the Bethel Park baseball team’s storybook season.

The Black Hawks’ hopes for a WPIAL Class 5A championship were ultimately dashed, however, with a 2-1 loss to Franklin Regional June 1 in the title game at Wild Things Park in North Franklin Township.

Despite the loss, the book has not closed on Bethel Park’s season.

Bethel Park (18-4) will face the District 6 or 10 champion in the first round of the state playoffs set to begin June 7.

“These guys should keep their heads up,” said BP head coach Pat Zehnder.

“We are on to states, added Zehnder, who noted his team would welcome a rematch with Franklin Regional (19-1).

If both teams advance in the PIAA tournament, they would meet in the semifinals set for June 14. The state championship game is scheduled for June 18 at Medlar Field in Lubrano Park on the Penn State University campus.

The Black Hawks have won just one PIAA baseball title in school history. That state banner came in 1988 after BP had also lost the district title.

BP’s defeat to Franklin Regional stung because of strong pitching and costly errors.

Unlike their previous playoff victories, which were consecutive walk-off wins against Shaler and West Allegheny, BP came from behind and overcame mistakes only to lose in the end.

David Kessler led off the top of the seventh inning by reaching base on an error. He moved to second on a wild pitch. Kessler scored on a pinch-hit single by Zack Sackett to tie the game at 1-1.

“You think with coming back and with two out, two strikes and our pinch-hit hero comes through yet again, the momentum flips,” said Zehnder. “But the credit goes to Franklin Regional for coming back when the momentum could have been sapped from them.”

Panthers pitcher Brian Pirone sapped BP’s energy at the plate. The Seton Hill recruit struck out five, walked none and allowed only two hits until Sackett’s RBI single. He pitched all seven innings and improved to 10-1 overall.

“I was impressed with the velocity with which he throws,” Zehnder said of Pirone. “I felt like he was really throwing hard in the beginning and I was hoping he would fizzle out a little but he kept bringing it the entire game. He’s just such a good pitcher.”

Bethel Park’s Eric Chalus was nearly an equal adversary. The Kent State recruit fanned eight, walked none and surrendered five hits before yielding to Evan Holewinski in the seventh.

“This is what we expected coming into game, two absolute beasts out there on the mound, going pitch for pitch,” Zehnder said. “It came down to which team was going to make fewer mistakes in a game like this and that was Franklin Regional.”

The Panthers scored their first run on a throwing error in the fourth inning. Tim Quinn led off with a double. When Caden Smith tried to sacrifice him over to third base, Chalus fielded the ball in front of home plate, but his throw to first base sailed into right field, scoring the run.

The Panthers scored the game-winning run in the bottom of the seventh.

Luke Treloar singled. With two outs, Louie Kegerreis, who had singled in two previous plate appearances, reached base on an intentional walk. Andrew Muraco then knocked in the winning run with his base hit to center field.

BP hit the ball well but the Franklin Regional defense came up with big plays, robbing Ben Hudson and John Chalus of hits in the first and third innings.

Sackett, Kessler and Chalus had singles for the Black Hawks in the game.