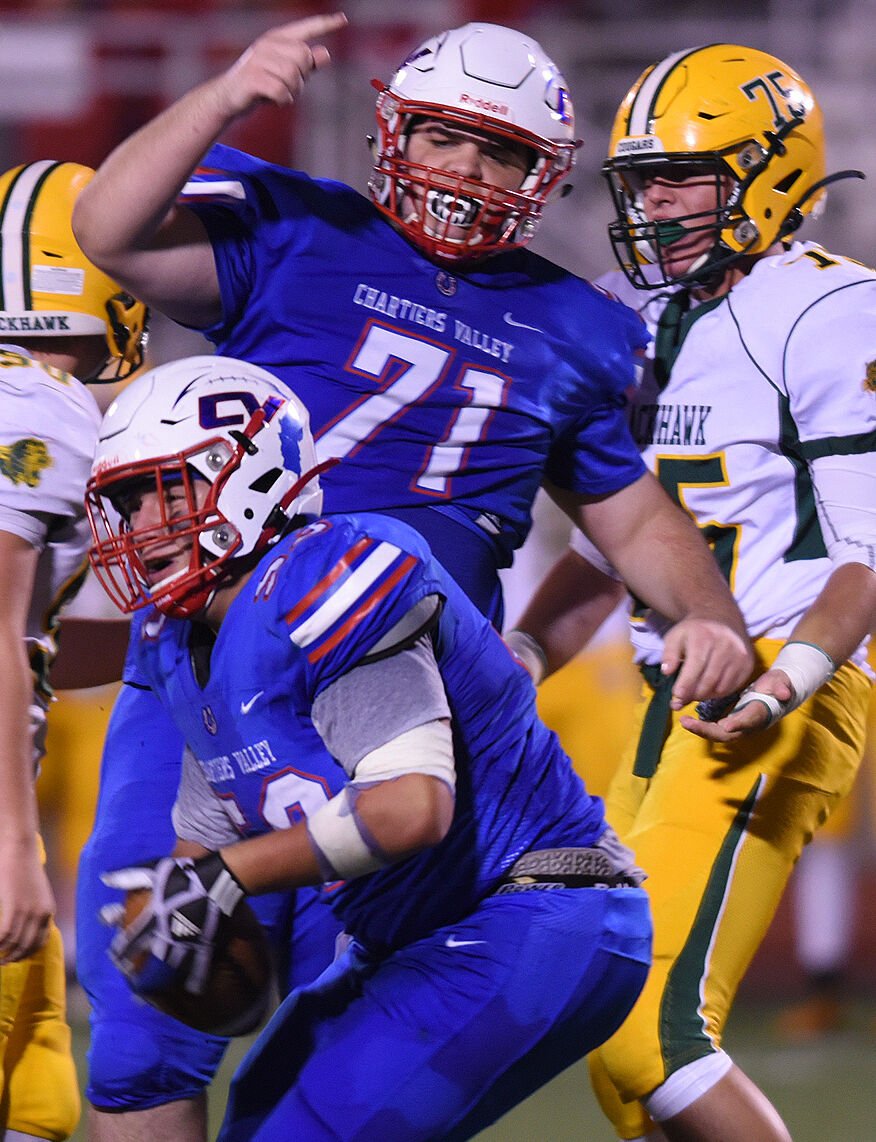 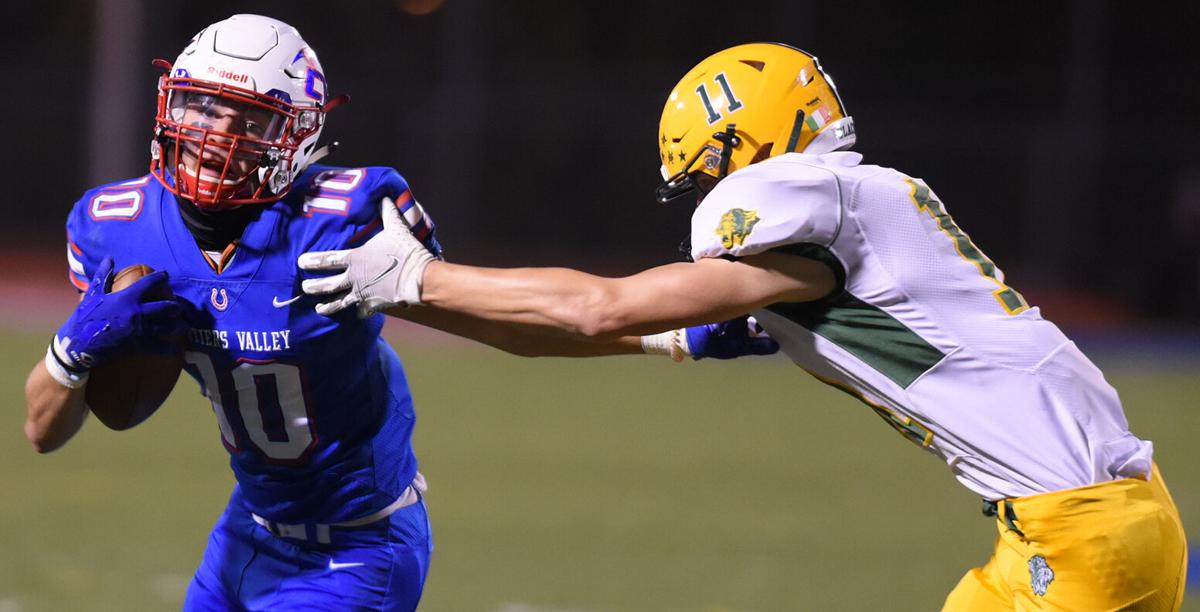 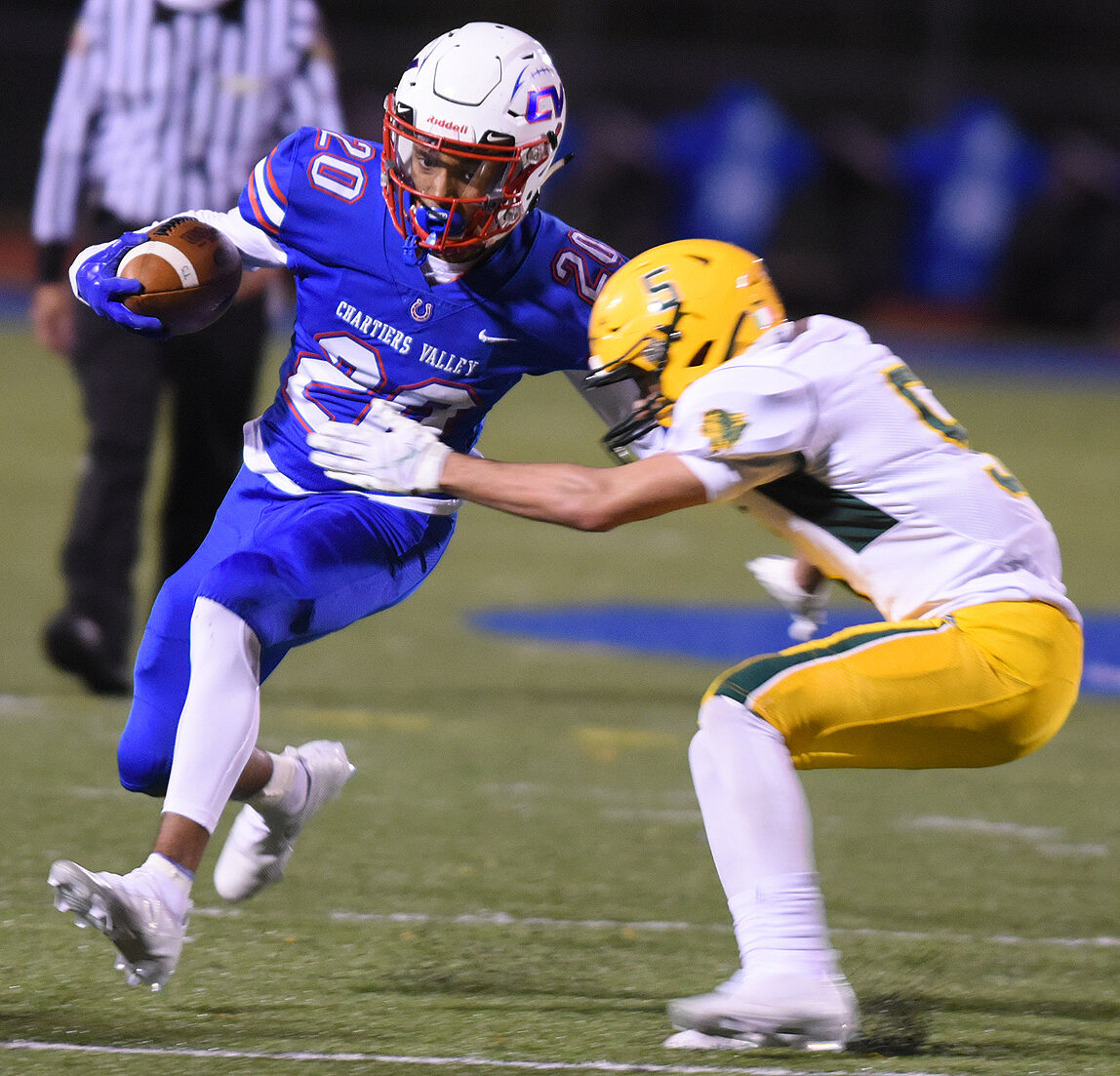 Chartiers Valley's Jordan Demus turns the corner while a Blackhawk defender attempts to make the tackle. 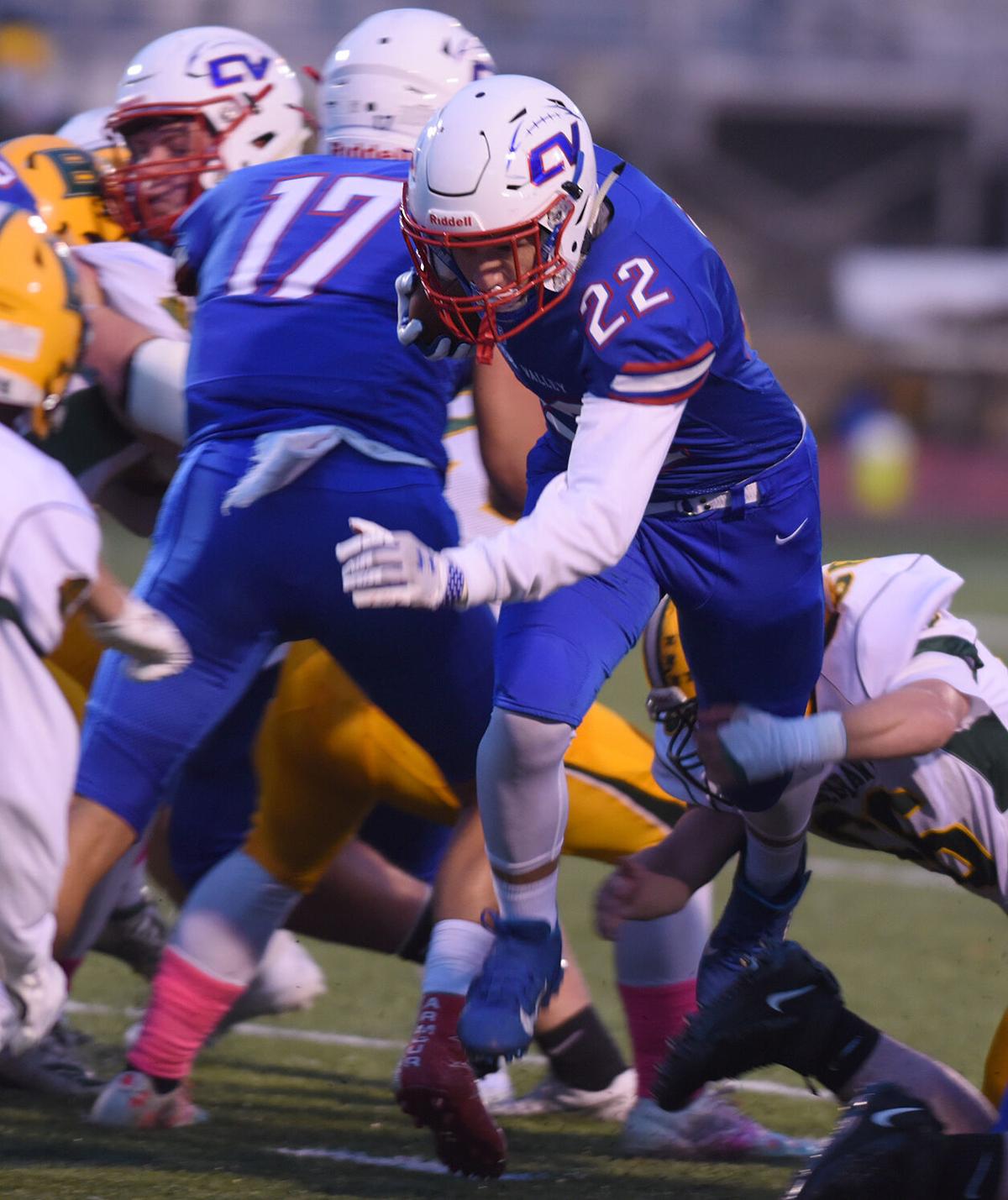 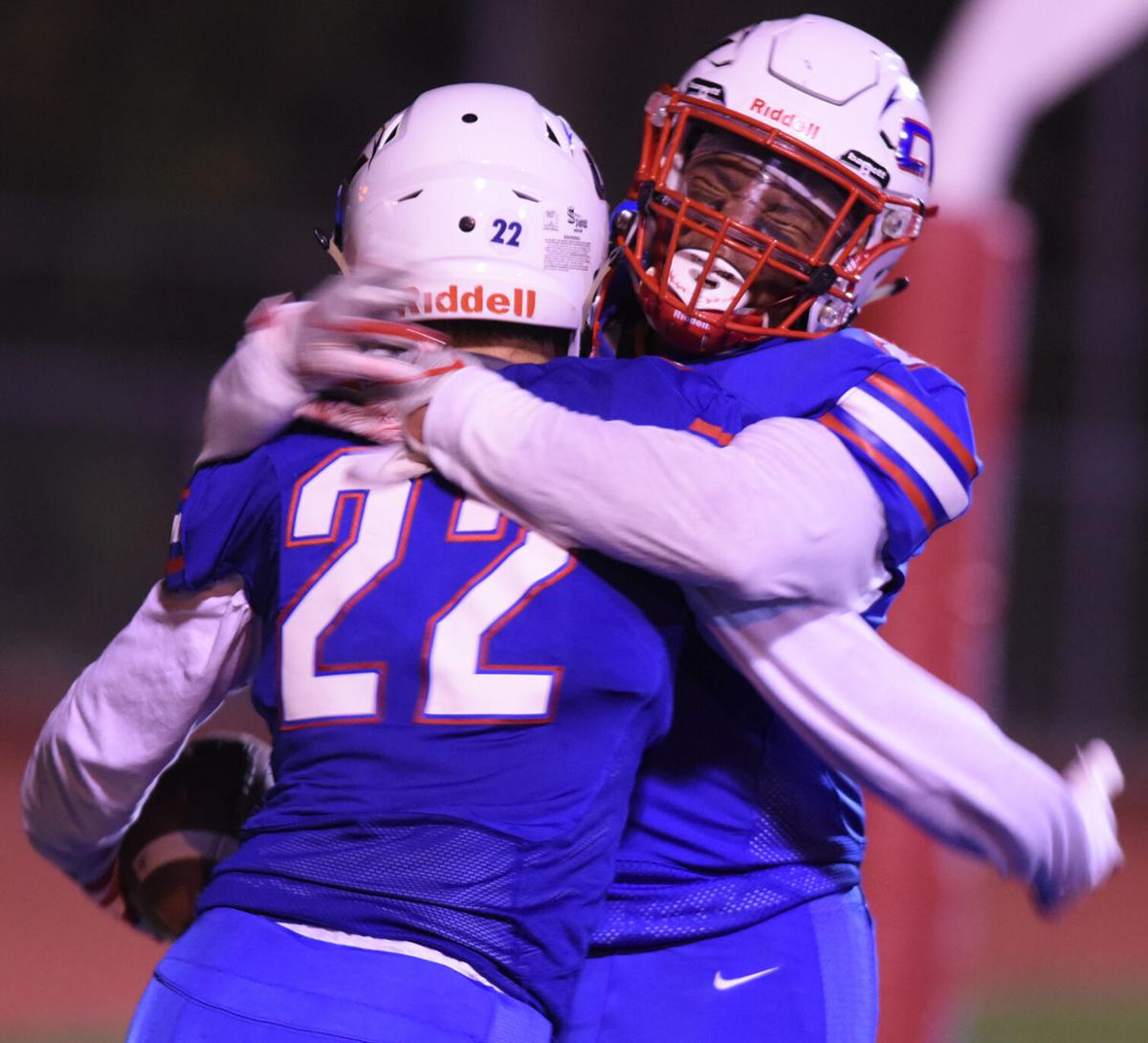 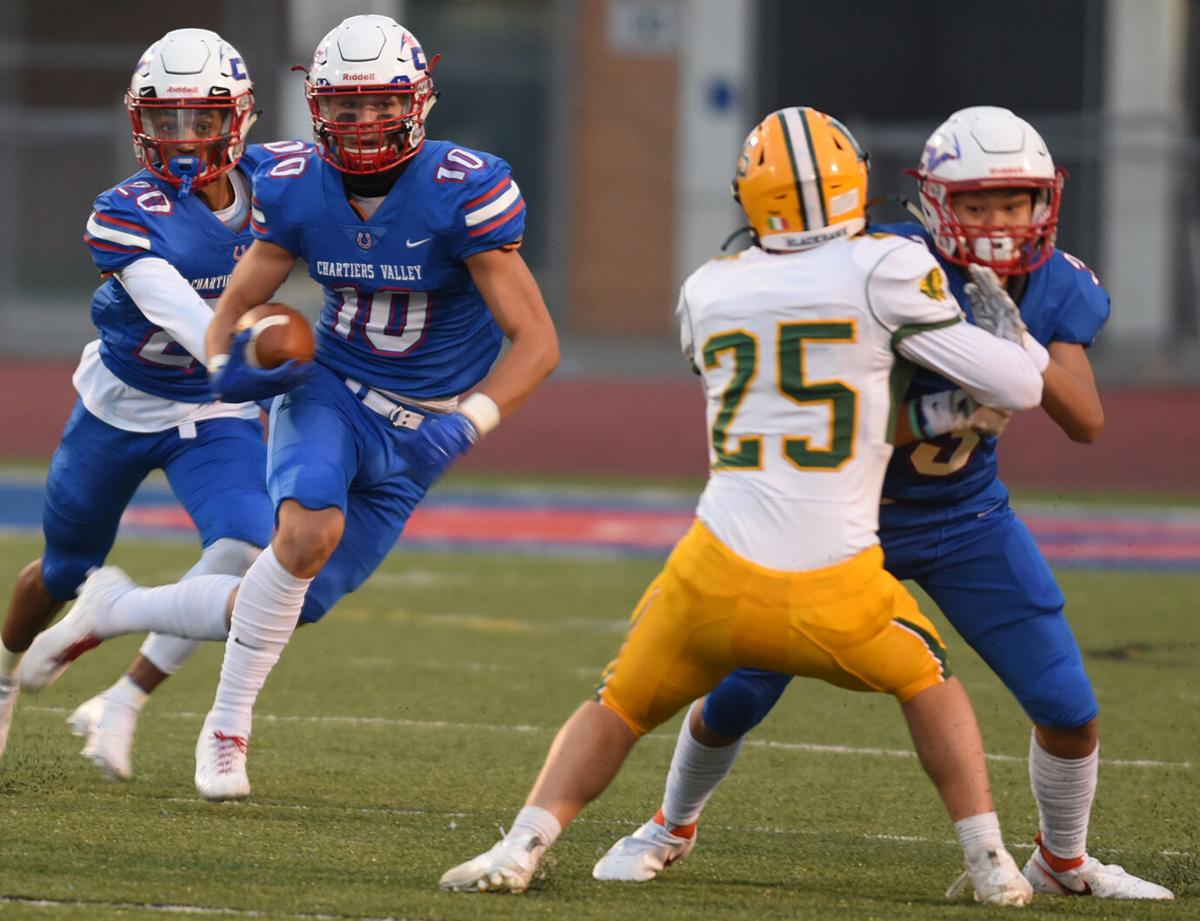 Chartiers Valley's Jordan Demus turns the corner while a Blackhawk defender attempts to make the tackle.

Chartiers Valley may have started slowly, but the Colts certainly finished strong.

After easing into a 13-6 halftime advantage, CV took control by scoring 28 points to thump previously unbeaten Blackhawk 41-14 in a Parkway Conference game.

“We are slow starters but we have been a good second-half team because of our depth,” said CV coach Dan Knaus.

“We have come a long way,” Knause said. “The kids are confident."

Krause said this is the first group that has come all the way through the program since his arrival four years ago.

“They know our expectations,” he said. “They know what we expect and they are playing good, smart football.”

From the start, CV forced the Cougars into poor field position. The Colts started four drives in Blackhawk territory and three others at their 47 or better.

CV used a partially blocked punt to set up its first score – a nine-yard scoring strike from Anthony Mackey to Abraham Ibrahim.

Mackey went on to toss three touchdown passes. He hooked up with Socrates Boulis for a four-yard score as CV bolted to a 13-0 lead with 5:50 to play in the first half. Anthony Collura initiated the drive by intercepting a Cougar pass.

After Sam Pocci then recovered a fumble, CV could not stretch its lead. Instead, Blackhawk forced the Colts to make second-half adjustments when it tightened the contest with a two-yard touchdown. Jordan Demus, however, blocked the PAT and CV led 13-6 at intermission.

A muffed punt by Blackhawk set up a short field for the Colts and with 7:37 to play in the third quarter. Mackey then rushed for a 17-yard score.

Mackey would score his second rushing touchdown after the CV defense once again rose to the occasion. Donovan O’Malley sacked the Blackhawk quarterback and forced a fumble, recovered by Jacob Adwar, setting the stage for Mackey’s score. On the conversion, Ibrahim caught a pass from Pocci.

Though Zack Ours returned the kickoff 90 yards for a Cougar score, CV again responded. With 2:03 left in the third quarter, Mackey hooked up with Ibrahim for a seven-yard score. His two-point conversion pass to Collura afforded CV a 35-14 lead.

The Colts have outscored their opposition 84-19 in the second half of their first four games.

Mackey had a game-high 84 yards rushing and 68 yards passing.

“We spread it around,” said Knause. “Our offense is an unselfish system and the players have bought into it. We may not have any leading stats in the paper but as a team we’ve spread it around and have done some good things.”

The Colts look to do more good things when they travel to Aliquippa Oct. 9. The Quips are ranked No. 2 in Quad-A.

“Every game you win, the next one gets more important,” Knause said.

Audio had five catches for 95 yards. Rossi finished with 79 yards on five receptions.

The Black Hawks are coming off a 17-7 loss to West Allegheny. Max Blanc threw a 60-yard touchdown pass to Gavin Moul for BP’s lone score. The Indians scored 17 unanswered points to clinch the victory.

Mt. Lebanon kicker Casey Sorsdal converted a 27-yard field goal the Blue Devils would cling to until NA forged ahead with a pair of fourth-quarter touchdowns to take a 14-3 lead it would not relinquish.

Eli Heidenreich hauled in a 10-yard pass from Joey Daniels. Mike Beiersdorf pulled in the two-point conversion but the Tigers did not buckle and held on for victory.

Heidenreich had six receptions for 45 yards.