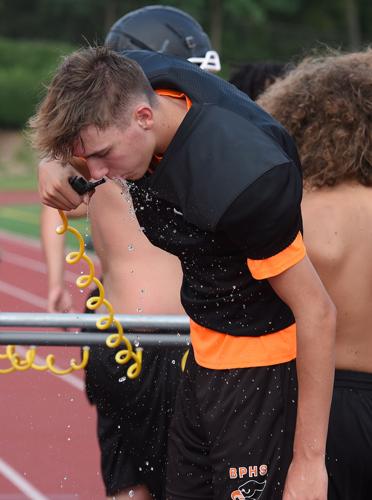 Hydration will be an important practice for football players as they start a new football season. Practice starts Aug. 8 with heat acclimitization. 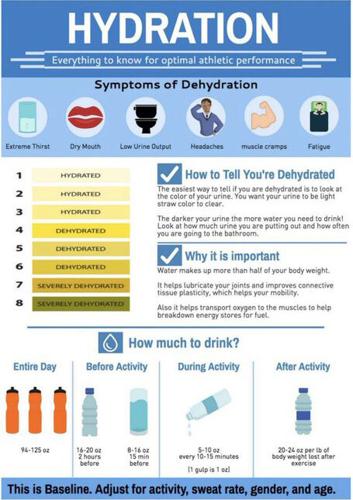 Hydration will be an important practice for football players as they start a new football season. Practice starts Aug. 8 with heat acclimitization.

August marks the arrival of the dog days of summer as well as the start of the high school football season.

“They are effective as they are mandatory,” said Peters Township head coach T.J. Plack.

He notes there is 100% attendance.

“We have all our players. There are no baseball/lacrosse tournaments, no summer league basketball games and no vacations,” Plack said.

Many teams already have been hard at adjusting to the elements. Throughout June and July, players have participated in conditioning programs, not to mention a plethora of passing camps for skilled positions and clinics for linemen.

So who’s ready for some football in hot, humid and sticky conditions?

“After this summer, any team worth their salt will already be acclimated to the heat,” said Bethel Park coach Brian DeLallo.

The Hawks use heat week to begin their offensive, defensive and special-team installations because like most teams they will play a game instead of conducting a second scrimmage on the second Friday of training camp. On Aug. 26, BP will host North Hills.

“Because most teams play games week zero, I believe programs use heat week in a way similar to what used to be the week of the first scrimmage,” DeLallo said.

“We really use that (heat) week to build our team chemistry, find out who our leaders are, and see our younger players come on the scene and compete,” said Panthers’ coach Mike Junko. “It’s always a great week of practice for us.”

The Hawks return 29 letter winners, 18 of whom were starters, an even 9 on offense and defense. BP finished 5-6 overall after a tough loss, 27-23, to Woodland Hills in the first round of the WPIAL Class 5A playoffs.

“We are always excited about the start of a new season,” DeLallo said. “We think we have a chance to be pretty good this season, so that adds to the excitement.”

The Panthers boast 10 returning veterans on defense and eight starters on offense from a club that finished runner-up to Moon in the Allegheny Six Conference. USC posted a 6-5 overall record after a disappointing loss to Fox Chapel, 13-10, in the playoffs.

“It has been a long off-season,” said Junko. “Our kids and our community are ready to get back out to the stadium on Friday nights. This is a group of kids our coaches really enjoy working with, so we can’t wait to get started.”

During heat acclimatization and the two ensuing weeks of training camp, the Panthers and Hawks will focus on different things.

USC, meanwhile, will be building upon a staunch defense that allowed only 64 points in conference clashes and 16.6 points per game. The Panthers will also focus on finding more consistency on offense during training camp.

“We lost a few key guys,” Junko said of Ethan Hiester (a preferred walk-on at WVU) and Mateo Cepullio (an Akron baseball recruit). “I am looking forward to the competition for some of those spots. We have seen a lot of growth in our team this summer and I am hopeful that continues as the pads come on.”

After its two tune-up games, BP opens the regular season on Sept. 2 at Mt. Lebanon.

The Blue Devils are the reigning WPIAL and PIAA Class 6A champions. Though they graduated nearly two dozen seniors after rolling up a 15-0 record in 2021, they boast many tested veterans, including Richmond recruit Kade Capristo

USC is on the road to start the season, visiting Norwin on Aug. 26 and North Hills on Sept. 2. The Panthers open conference action at home against Baldwin on Sept. 9.

The Highlanders are one of three teams that have dropped from Class 6A to 5A. The other two squads, Norwin and Hempfield, are competing in the Big East Conference this fall with Franklin Regional, Gateway, Penn Hills and Plum.

The Hawks and Panthers clash on Oct. 7 at USC in a game that could determine the conference champion as well as the top seed in the playoffs. The conference has produced a finalist in the title game for the past three seasons.

Peters Township was a finalist twice during that span. The Indians lost to Gateway, 21-20, in the 2019 finals. They succumbed to Pine-Richland, 35-0, in 2020 championship contest.

Last fall, the Indians reached the quarterfinals in the Class 5A playoffs. They finished 7-5 overall after dropping a 20-14 decision to P-R. Peters posted a 2-3 record and finished fourth in the Allegheny Six Conference. Though the roster features only six seniors, the underclassmen have plenty of experience from last season.

Plack said the Indians “can’t wait” for the season to commence. There are a couple of concerns, however.

“We will have a younger team this season, so there are a lot of questions that we need answered. It will be an exciting time trying to piece together the depth chart based on performance and reliability, but it is an item that we have to overcome,” Plack said.

The Indians scrimmage Montour at 10 a.m. Aug. 20 at Confluence Financial Partners Stadium. They visit Fox Chapel on Aug. 26 and Seneca Valley on Sept. 2 before hosting Trinity on Sept. 9. Conference action begins at home against South Fayette at 7 p.m. Sept. 16.